A New Raft of the Medusa: Villaronga’s The Belly of the Sea 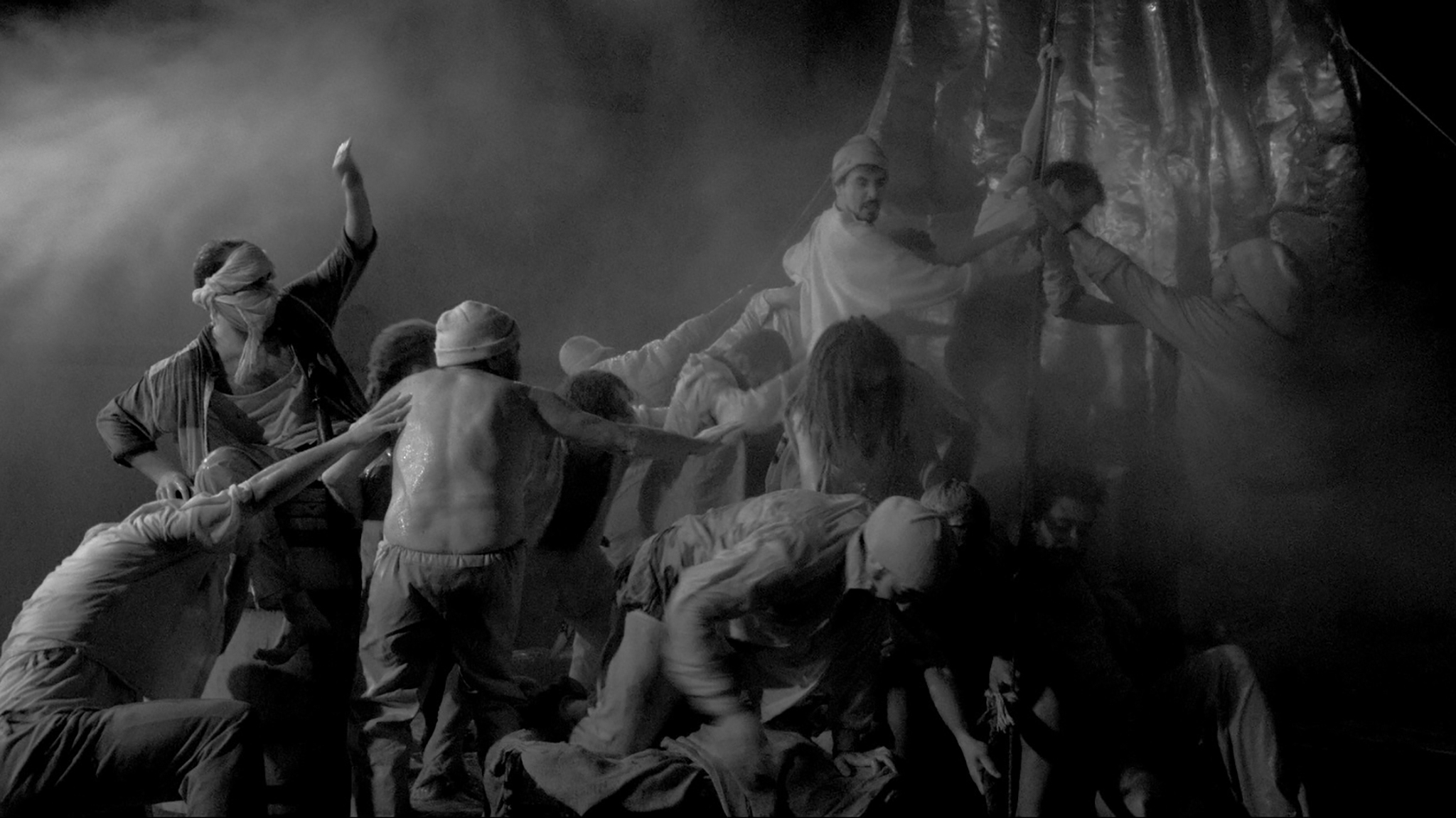 Because of the COVID-pandemic, a lot of theatre plays couldn’t be finished last year, let alone shown to an audience. Agustí Villaronga’s The Belly of the Sea (2021) was one of those plays, but the director found a way to still present his version of Géricault’s The Raft of the Medusa. He did so by making a poetic and abstract mix of film and theatre, combining representations of historical facts and harsh contemporary reality in beautiful black-and-white images.

They are the only men who survived a shipwreck: the white French medical officer Savigny (Roger Casamajor) and the black sailor Thomas (Òscar Kapoya Besteiro). Against a tribunal-like setting (neither an audience nor a judge are present), they each tell their own version of what happened during and in the days after the shipwreck. Their conflicting testimonies are illustrated by flashbacks to the horrific moments they went through.

One after the other dies on the raft and gets buried in the belly of the sea. Though it’s terrible to die this way, the scenes in which dead bodies sink into the water are beautiful. This is actually typical for The Belly of the Sea in general. The moments on the ship are terrifying, but the compositions and camerawork add a stylistic flourish. One of the most beautiful scenes is the one that presents a beautiful underwater world full of fish, coral and dead bodies standing like damaged statues in the sand.

These flashbacks are, on the one hand, shot in a theatre-like setting in which actors are standing in a shallow layer of water, hanging around a stage raft. On the other hand, some moments are shot on a real raft floating on the surface of a real sea with drowned bodies in the background. The usage of two different decors for the same location, time and story works out a bit confusing, but the reference to the origin of The Belly of the Sea is understandable from the director’s perspective.

The flashbacks alternate with horrifying shots of both the painting The Raft of Medusa and contemporary news footage of refugees on tiny boats, fighting for their live and future. The abrupt transmissions between the theatrical flashbacks and the (even more) shocking temporary images takes you out of the theatrical atmosphere and sets your feet firmly on the ground.

Who is right, who is wrong? Does the officer tell the true story or is the sailor telling the truth? There is no judge to decide. Only the belly of the sea knows. The sea is more than a cemetery of drowned people. The sea is like a mirror, reflecting the truth. A silent witness to what really happened on the raft.