A Reportage Of Circuit Bending 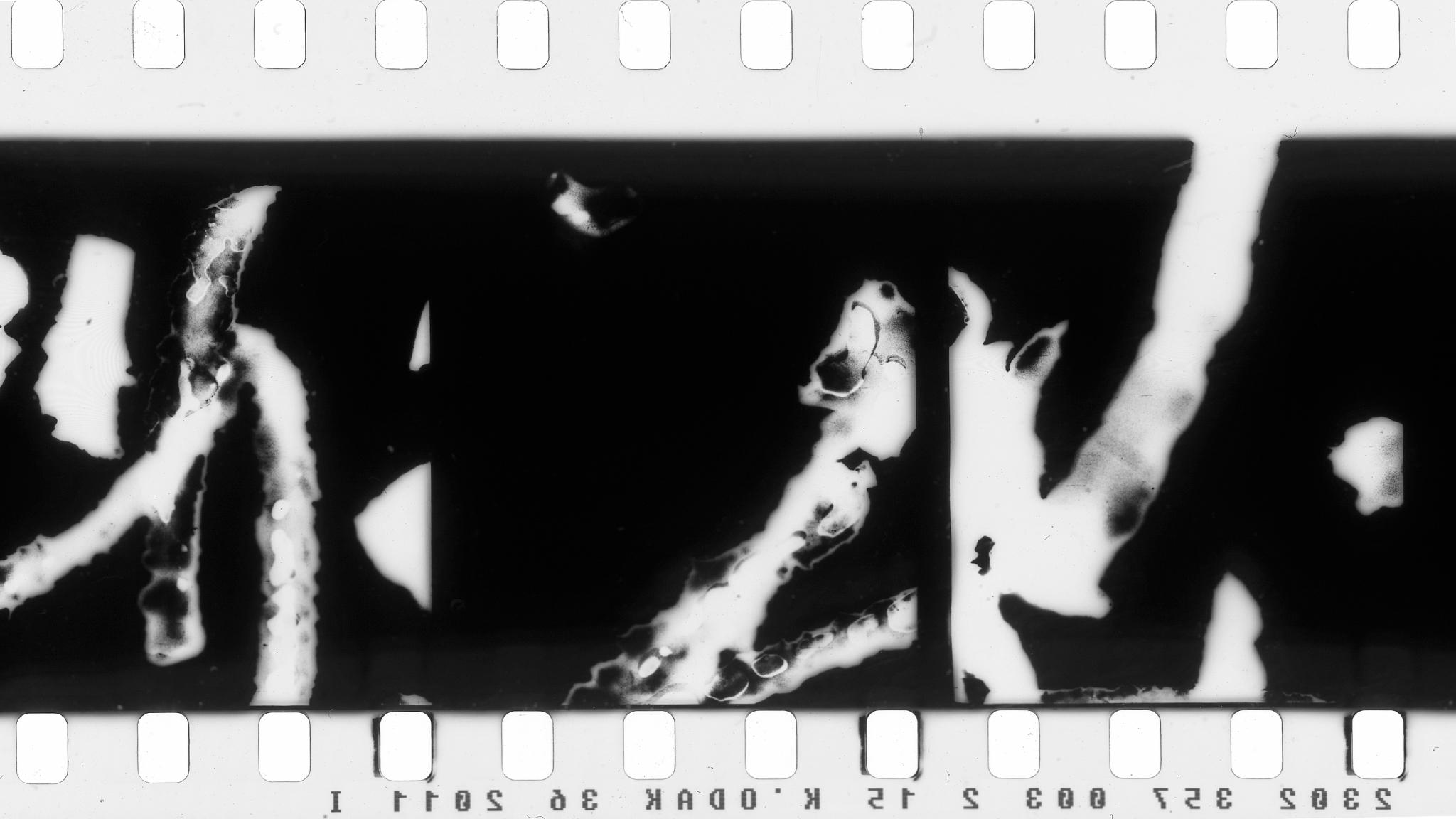 I believe it was filmmaker Siegfried A. Fruhauf who exclaimed it was an absolute privilege to have his film be projected in such a loud cinema. He seemed less out of breath than the rest of those seated at KINO 4 and was, like all the other filmmakers attending that night, delighted to clarify some things about his work. Fruhauf was correct: the fourth screen in the cinema KINO (from now on lovingly referred to as KINO 4) was loud, audibly and visually. As an audience, we were subjected to a 63-minute programme of artists presenting works that dared to examine the medium they were working in. Through calm observation or loud destruction, the idea was never to annihilate cinema, but to open it up, even if they had to use force.

Or, on a personal note: I left the theatre transformed. Positively devastated to my core. I raved to a friend later that week that I had seen possibilities rather than problems. That same friend had asked me a few weeks before what era I, as a filmmaker, longed for. After some internal deliberation, I replied that this era hadn’t happened yet. That I longed for the future. And what I saw that night, on the 25th of January, was not steps, but leaps into that direction.

Viktoria Schmid’s A Proposal to project in Scope

But it wasn’t Fruhauf who kicked off the evening. That belonged to Viktoria Schmid and A Proposal to project in Scope (2020), an 8-minute long meditation on cinema, with no archival material. Instead of making the screen invisible, which both the institution and the medium aspire to achieve through illusion (“movie magic”), Schmid placed a screen with the CinemaScope aspect ratio as a sculpture on a beach near Nida, a Lithuanian village. Pointing at the CinemaScope-screen in KINO 4 she told the audience that she wanted to make the blank canvas the main protagonist. And that it currently shows whatever nature wants to project, as it’s surrounded by dunes and trees, the ocean not far away.

The film we were shown was shot and projected on 35mm, a format from a bygone era which was rapidly replaced by the Digital Cinema Package (more on that below). And yet Schmid’s choices here did not seem to be drowning in nostalgia, always the wrong motivator.

After the dunes and the trees and the ocean not far away, Dutch filmmaker Marieke van der Lippe showed us The Machine, a 16-minute adaptation of a 50-minute performance piece based on a radio play from 1968. She had seen the piece being conducted by composer Radboud a few years ago and had questioned him afterwards, about why there wasn’t a visualization accompanying the piece. You see, it’s in German and its pace is rather rapid.

In it, a few voices representing a machine (which we would nog call a computer) systematically analyze Johann Wolfgang von Goethe’s poem Wanderer’s Nightsong. Words are repeated in sequences of varying quantities or shuffled around altogether. Later there are vowels and even parts of other words placed within each word of the poem. Van der Lippe argued that she loved erformance, but that most of its content went over most people’s heads. So she set out to visualize what was being said, through crude animations with text. And, because this is a piece about how systematic analysis can never lay bare that what is sublime, low-resolution stock photography of ‘awesome’ nature. All this to exhaust her audience beyond meaning. Hollis Frampton was found howling with joy in his grave.

And it’s a bit like this text, in which I am anxiously trying to convey to you, the reader, the transformative experience of this evening of film through the means of text and failing tremendously.

And it’s a bit like Beatriz Ferreyra, a pioneer of musique concrète, who in Making a Diagonal with Music tries to convey to us, the viewers, the way she hears and experience sound. The explanation of her methods often have to rely on onomatopoeia, as the words she would like to use do not exist. Meanwhile we see her work her gorgeous Telefunken, bits of audio tape hanging from her neck, wildly gestating and gently spinning. Director Aura Satz captures Ferreyra only in fragments, following the movements of her fingers through which her sounds glide, before they reach the playhead. All the while we hear what she produces, a symphony of garbles and swoops, like a rubber band being stretched out until infinity. (Admittedly, as someone who creates tape loops and experimental film, I am the Venn diagram this film caters to.)

And so we arrive back at Fruhauf and his joyous declaration for seeing his film being played this loud. His film THORAX (2019) could be considered part of the other half of the night, in which the films and their creators tried to break the machine. For starters, THORAX was made of bits and pieces of Duchamp’s Anémic Cinéma (1926) altered through archaic computerised processes, until it came out the other end as the flicker film equivalent of a bulldozer.

The comparatively bulldozing and Further Radical by Stefano Canapa, had little interest in the synthetic and went for radishes and celluloid. A move that, according to , came naturally to him when he and his son were slicing up radishes in thin layers at the breakfast table one morning. Both films enter the field from different angles, yet to the same effect. Not unlike the Japanese experimental music genre Onkyo, Fruhauf and Canapa set out to make the cinema a physical experience. By rapidly flashing contrasting visual elements accompanied by an incredibly loud soundtrack (thank you, KINO 4), in both instances it felt as if I became one with the screen.

I was brought back to that night a few years ago where I found myself in the midst of My Bloody Valentine’s unfortunately titled Holocaust, the bridge of the song You’ve Made Me Realise in which Kevin Shields and cohorts created nothing but noise for an extended period of time, slowly increasing in intensity. There’s something about feeling parts of your body move involuntarily by the sheer power of amplified sound. And I experienced it again in my seat in KINO 4, though visually, as if I were a few stops short of passing out.

Writing this made me realize that the experience sounds quite unpleasant, but I want to assure you it wasn’t. It was a rather positive experience. Something you hardly get in the cinema. Or anywhere really. Most films try to move audience emotionally, some of them try to move them intellectually, but very few go for the physical. And both THORAX and Further Radical broke open the machine and reached out.

And finally, there was #1, courtesy of Telcosystems, which is an examination of the possibility of the Digital Cinema Package. Or lack thereof, rather. Gideon Kiers and Lucas van der Velden (2/3rd of Telcosystems) argued that for years, before the advent of the digitization of film projection, artists could include both the material on which the film was shot as well as the projector in their final presentation. But when a few people we’ve never heard of decided it was time for the digital revolution to reach the cinemas, they decided on an absolute system. One that would not allow for experimentation with the material fed to the machine or the machine that projects. Through late-night iPhone footage, a DSLR with the auto-focus on, a collection of digital abstractions and centre-screen subtitles, Telcosystem takes us through their process of trying to hack the DCP. An adventure that leads them via a lot of setbacks to Croatia, the only cinema in the world willing to let them have a go at breaking open their machine. Because of course, the absolute machine which is now the norm in cinema projection is too expensive to tinker with to search for new possibilities.

I’ll have to give credit to the elderly gentleman sitting next to me who, after the programme, started questioning me about sync sound on film. He proclaimed how peculiar it was that a lot of forward-thinking artists that night were going back to analog formats, or trying to reproduce certain elements from yesteryear. As if the artists needed to take a few steps back to catch their bearings and move a different direction. And I found that a very apt description of what we both had experienced in KINO 4. When I asked him about his background the elderly gentleman said it was in medicine. I wish I had offered him a beer and talked to him some more.

This International Film Festival Rotterdam article was published in February 2020