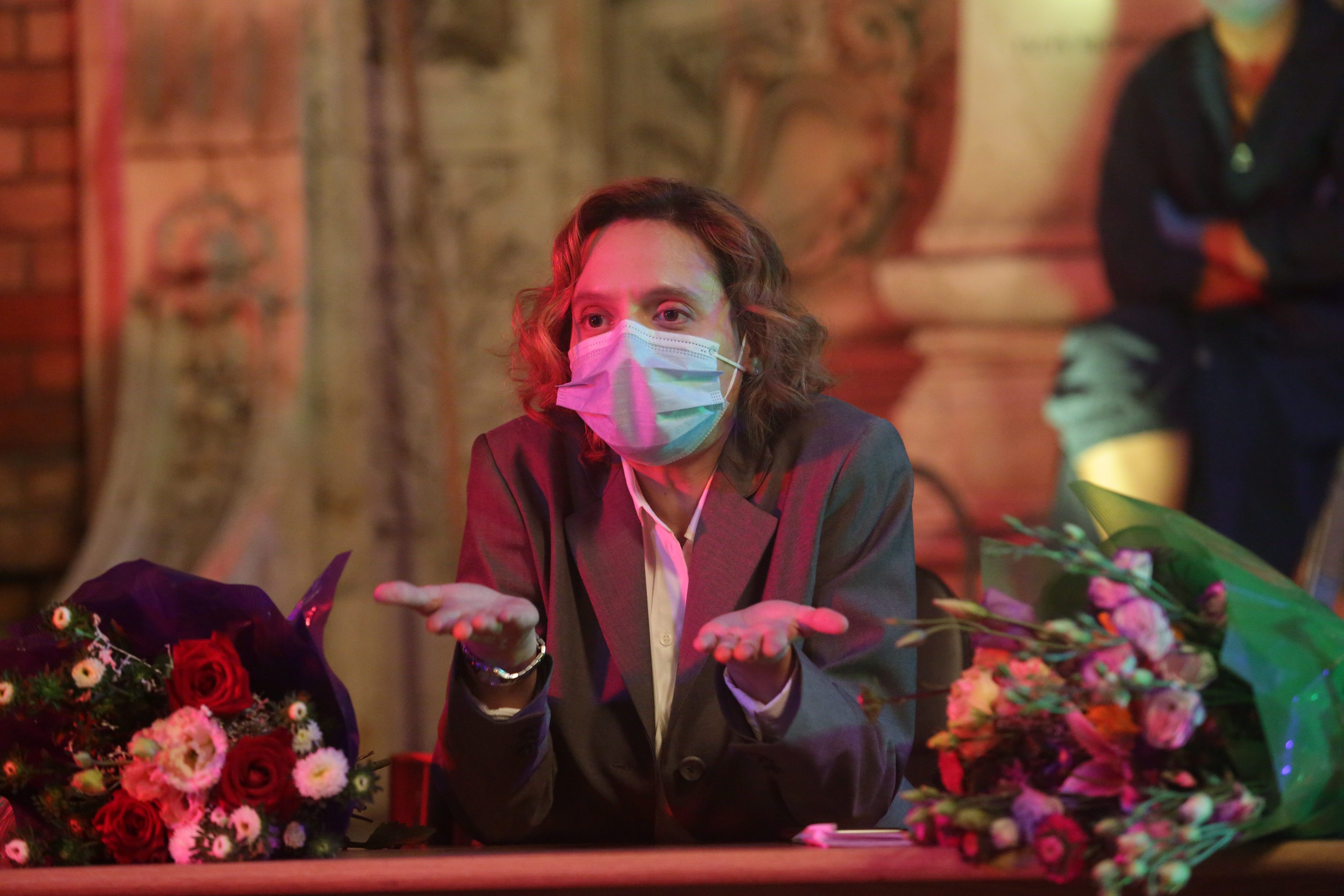 A year on from the World Health Organisation declaring the Covid-19 outbreak a pandemic, film production has continued across the globe with increased safety measures in place; for shoots interrupted last March and later resumed, or productions that had their start delayed finally beginning filming. We’ve also had projects that were not only conceived during early lockdown stages (depending on where the filmmakers have been based), but also those that have already gone into production since. Some have even managed to be released already, albeit mostly directly to streaming services or video on demand in light of the crisis facing theatrical exhibition in a majority of the world’s major markets.

On the mainstream front, Doug Liman’s star-studded though low budget crime caper Locked Down is one notable example. It was first announced in September 2020, with writer Steven Knight reportedly having written the screenplay in July. The film was shot over the course of 18 days later in the autumn. Acquired as an HBO Max Original for North America, it was released there in January 2021 and has gradually been released on VOD in countries without HBO Max in the months since. Set in London during England’s (first) Covid lockdown, it follows an estranged married couple (Anne Hathaway and Chiwetel Ejiofor) planning to rob a jewellery store.

In terms of word-of-mouth successes, the British ‘found footage’ horror film Host, acquired by streaming service Shudder and released in July 2020, is perhaps the most noteworthy feature to emerge from pandemic productivity so far – though at 57 minutes, it is barely feature-length. Set during quarantine restrictions due to Covid-19, it sees six friends hiring a medium to hold a séance through Zoom. All of the actors were directed remotely, having to set up their own cameras, lighting and even practical effects and stunts.

At this March’s virtual Berlinale, a number of features filmed entirely or partially during the pandemic received their world premiere, including Céline Sciamma’s Petite maman and Ryûsuke Hamaguchi’s Wheel of Fortune and Fantasy. A triptych narrative of stories unconnected beyond thematic tissue, two sections of Hamaguchi’s film were shot in 2019 pre-pandemic, with the third filming in July 2020 after the first state of emergency in Japan was over.

Most of these premiering features did not touch on the pandemic in any significant capacity, but there were two that did quite memorably. One does so explicitly, but the other is very much in the vein of the aesthetic that has come to define much of Covid-era media: screen-based storytelling. The pandemic did not give birth to narratives told entirely through computer software windows, but there has certainly been a rise in them in the past year – Host just happened to be the biggest breakout success and one of the earliest to be released.

The debut feature as director for actor Natalie Morales, who co-wrote and co-stars in the film with Mark Duplass, Language Lessons was shot in secret in the past year. Though the voices of one or two other individuals are briefly heard offscreen across its runtime, Morales and Duplass’ characters are the only ones we ever meet, and this stripped-down two-hander story is told entirely through video chats – apart from one notable sequence, but that would be spoiling too much.

Language Lessons never alludes to the pandemic being something that’s going on in the film’s universe. It may well be happening, but no one references it in dialogue and most of the video chats over webcams and phones take place within the confines of the leads’ homes. The premise of the film is based around a Spanish teacher and her new student, their lessons taking place over webcam. We learn that Adam (Duplass) lives in Oakland with his husband, Will (played offscreen by Desean Terry), while Cariño (Morales) is currently based in Costa Rica, so the learning format is not explicitly caused by circumstances in the wider world; for his birthday, Will has gifted Adam 100 online Spanish classes.

While Language Lessons may not be a Covid movie per se, it is the nature by which the relationship at its centre develops that makes it a definitive text for filmmaking of this period. While a shock in the moment, it is not a huge spoiler to say that during Adam and Cariño’s second lesson it is revealed that Will died the night before, having been hit by a car. Adam’s state of shock naturally disrupts the lesson plans, but Cariño attempts to comfort him and later checks in on him through the leaving of video messages. After some time, Adam chooses to resume their sessions for both a sense of routine and what he perceives to be a growing close friendship.

Although montages of several separate lessons come into play after a while, we see a majority of the platonic bond form on-camera, with many of the sessions playing out in relative real-time from beginning to end. In honing in on relative strangers thrust into a sudden relationship in particularly heightened circumstances, Morales and Duplass’ script gets at certain truths about how both local and far-flung friendships and dependencies have formed, flourished or sometimes nosedived throughout the past year; be they neighbours getting to know each other due to being the only human beings in close proximity during a strict lockdown, or people adapting to seeing previously regularly visited loved ones in other towns, states or countries entirely through a screen. That the central relationship of Language Lessons is partly defined by grief is also a crucial factor in a year where many have been unable to properly mourn lost loved ones alongside family or friends in person; where funerals and wakes have been live-streamed.

Ostensibly about a school teacher finding her career and reputation under threat in the aftermath of a sex tape being leaked online, Jude’s playful, anarchic film uses this device as a springboard for tackling various hypocrisies and prejudices in society, particularly Romanian society of its setting, and not just those concerning the moral outrage aimed at the teacher, Emi (Katia Pascariu).

After it opens with a condensed version of the sex tape, Bad Luck Banging is split into three distinct sections, following Emi in the first and third. The last section is a sort of kangaroo court scenario where Emi makes her case for staying employed at the school before an audience of parents and grandparents of students, many of whom believe she should be fired because their children have accessed the video uploaded to a private membership-based adult website. Alongside the pervading subject of slut-shaming, the assembled parties venture into tirades involving antisemitism, holocaust denial, political correctness and religion, among other topics – those present include a priest and a military veteran.

Everyone present in the open-air makeshift court on campus is wearing a face mask, sat reasonably far apart. One particularly outspoken individual refers to complying with this basic social etiquette as “sanitary dictatorship”, along with a reference to having to wear a “face muzzle”. One person’s face mask has the words “I can’t breathe” printed on it, bringing particularly loaded baggage concerning both pandemic sceptics and participants in the upswing of global protests connected to the Black Lives Matter movement last summer, which is when most of Bad Luck Banging was filmed.

The film’s first section involves much exposition, but most of all acts as something of an urban travelogue document concerning Bucharest in the time of Covid. Apart from some people walking on the street, almost every person we see onscreen is wearing a face mask, indoors and outdoors. Poor mask etiquette is something of a motif; at one point, someone talking in a pharmacy lowers theirs to make their voice better heard, only for an offscreen person to shout at them to pull it back up. That offscreen voice may well be a character in the scene, but thanks to Jude’s mischievous filmmaking, the reading that it’s a fourth wall break from someone involved in the making of Bad Luck Banging itself, shouting at the one-scene performer to not break safety protocols, seems perfectly plausible.

The film’s funniest fourth-wall break comes on-camera, and also proves an ideal intertwining of the feature’s pandemic portrait and exploration of obscenity. Throughout this first section, Jude incorporates long stretches of following actor Katia Pascariu from afar on the streets of Bucharest, as she crosses roads and works out where to go next. It’s unclear how many of the occasional looks to the camera from passing extras are actually looks to the camera from unwitting passers-by stumbling into shot for a film being made secretively. So, whether deliberately planned or a happy accident, one of the defining moments of the film is when one of these shots tracking Pascariu is disrupted by a grey-haired woman suddenly approaching the camera to say one thing and then walk out of shot, seemingly grinning behind her face mask. She has only one important thing to say to the viewer: “Eat my cunt!”