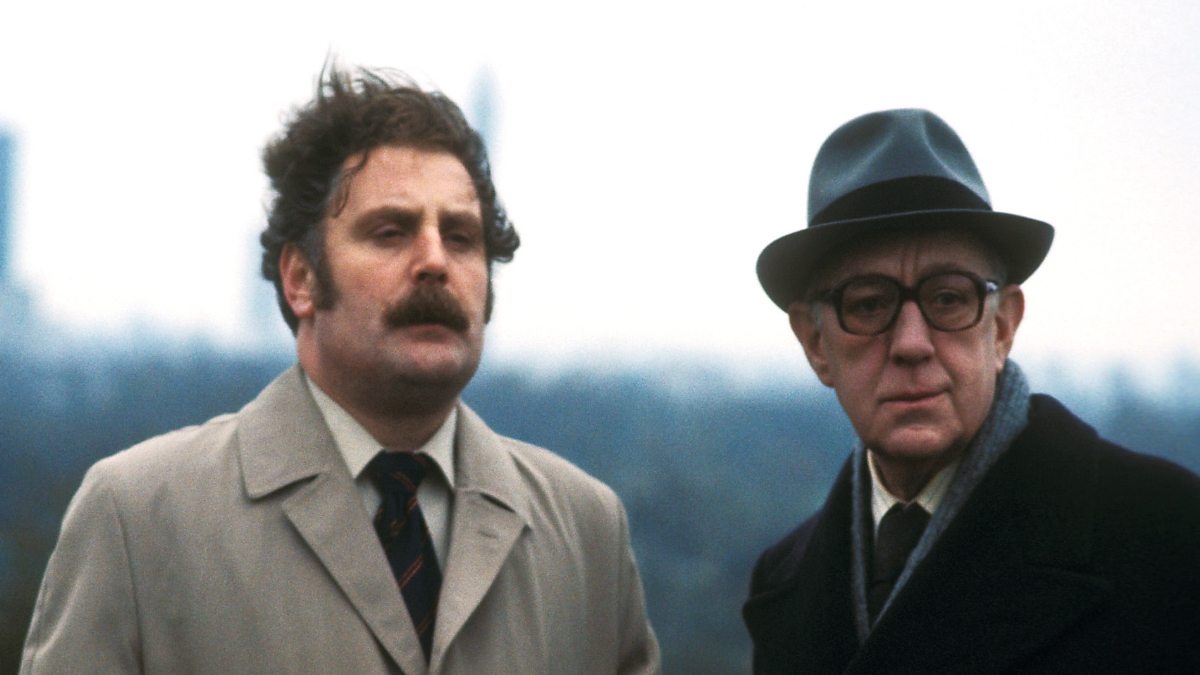 The lament for the loss of empire hangs heavy in John Irvin’s six-part adaptation of John le Carré’s classic spy novel Tinker Tailor Soldier Spy. Seventies London is literally a dark place here. It’s almost as if the city hasn’t recovered from the bombing during WWII and all the windows are still blacked out. Albion is in the grips of austerity and an unavoidable sombreness haunts every frame. How different from the more slick approach of Tomas Alfredson’s 2011 movie adaptation that, in comparison, seems seeped in period nostalgia. There is no room for nostalgia in Irvin’s version, only a melancholic and bitter realisation that something is rotten in the state of good old Blighty.

Tinker Tailor Soldier Spy is about betrayal at the highest levels of the British intelligence bureaucracy. The story is also loosely based on the case of the infamous Cambridge spy ring that passed on valuable information to the Soviet Union. The fact that these traitors were pillars of British society, shocked a nation that prided itself on safeguarding traditions and believing in the stable rigidity of class distinctions. The series begins with a secret mission that is carefully being prepared by the shadowy Control, the head of the Secret Intelligence Service, or the Circus as it is called in mock affection. He knows that a mole has infiltrated his organisation and he is determined to flush him out. His plan involves sending agent Jim Prideaux (Ian Bannen) to Czechoslovakia to meet a defecting general who knows more. This clandestine endeavour goes wrong spectacularly, ending Control’s tenure at the Circus.

We suddenly fast forward a few years and observe an impeccable Alec Guinness as the prudent George Smiley strolling through London. Once Control’s loyal deputy, he was dully demoted after the incident. But the mole sill seems to be active at the Circus as new information has come to light. As an outsider, Smiley is asked to investigate a source who claims to know more about the mysterious Karla, the head of Moscow Centre and Smiley’s nemesis. Gradually Smiley uncovers Karla’s agent who is operating within the higher ranks of British intelligence. Alec Guinness’s first major TV-role does not disappoint. As Smiley he seems to be the epitome of an English gentleman. Polite, soft-spoken, and somewhat inconspicuous. Carefully choosing his words and moving shrewdly, he doesn’t show much emotion. His large glasses are an essential prop for Guinness and he uses them to great effect when he subtly interrogates people. But behind Smiley’s self-restraint there is the emotional toll of a troubled relationship with his wife. One of the running gags in the series is the question ‘How’s Ann?’ that is thrown at Smiley by curious colleagues and gossipy acquaintances. Of course, everybody knows she has had an affair and remains unfaithful. But Smiley still feels affection for her even though he says that he has to rid himself of emotional attachments that have outlived their purpose. He confesses that he wants to dedicate himself to the profession of forgetting.

But Smiley can’t forget, as an infallible memory is his greatest asset within the dirty world of international espionage. He disposes of a very precise recollection of people and circumstances that is only equalled by Circus head researcher Connie Sachs. She is touchingly portrayed by Beryl Reid as a spinster who lives with her dog, Flush. Hiding in obscurity and still cross about her sudden dismissal with the advice to go out in the real world. A world she hates, as she loved the Circus and her “boys”. Connie is Smiley’s memory bank and helps him to unravel the messy office politics that has been plaguing the Circus.

One can only admire the way in which the slow pace of the series sucks you in. There is very little action apart from the secret rendezvous in Czechoslovakia that is brutally disrupted by Russian soldiers. Throughout, Irvin maintains a compelling atmosphere through lengthy dialogues, revealing recollections, and snappy exchanges between a first-rate cast of British thespians on top of their game.

The series doesn’t make any concessions to the limited knowledge the audience has of cloak and dagger stuff. Intelligence work is shown at its most intricate and byzantine, complete with idiosyncratic euphemism and code words that betray that inescapable British sense of irony: The reptile fund, Lamplighters, Swiss escapes. It is language that is also permeated by class and club loyalty. “Is he a Red Brick or a Sandstone?” and “Don’t mix with proles!”

It is this telling use of language that brings the greatest pleasure and Arthur Hopcraft’s script is razor sharp and perfectly handled by a cast who have no trouble embodying these Cold War warriors, or antiquated heroes, as Smiley so aptly observes. They speak with dignified scorn. It is sugar-coated politeness with a whiff of acid that leaves a nasty sting. This is especially the case with Ian Richardson as the seemingly perfect toff Bill Haydon. He has some of the best lines. Like when he is talking about a sweet boy he knows: “A cherub, but no Angel.” And his flattering words concerning Jim Prideaux that reveal his ambiguous relationship with the betrayed agent: “Built by the same firm that did Stonehenge!”

The series has a wonderful sense of place and Britishness. Smiley reminisces on Control’s faithfulness to the cause because he only ever loved Surrey, Lord’s Cricket Ground, and the Circus. Sensing the drastic changes that have been going on within the organisation, Smiley longs for a quiet retirement to Steeple Aston in the Cotswolds. Some epicentre of Britishness in a time where the British Empire is disintegrating and losing its place in the world. Or as Haydon so succinctly puts it: ‘Britain … Oh dear.’ Later Haydon knowingly confesses that a secret service is the only real expression of a nation’s character. So what does that say about Britain then and now? Go see this excellent and incomparable miniseries and find out!