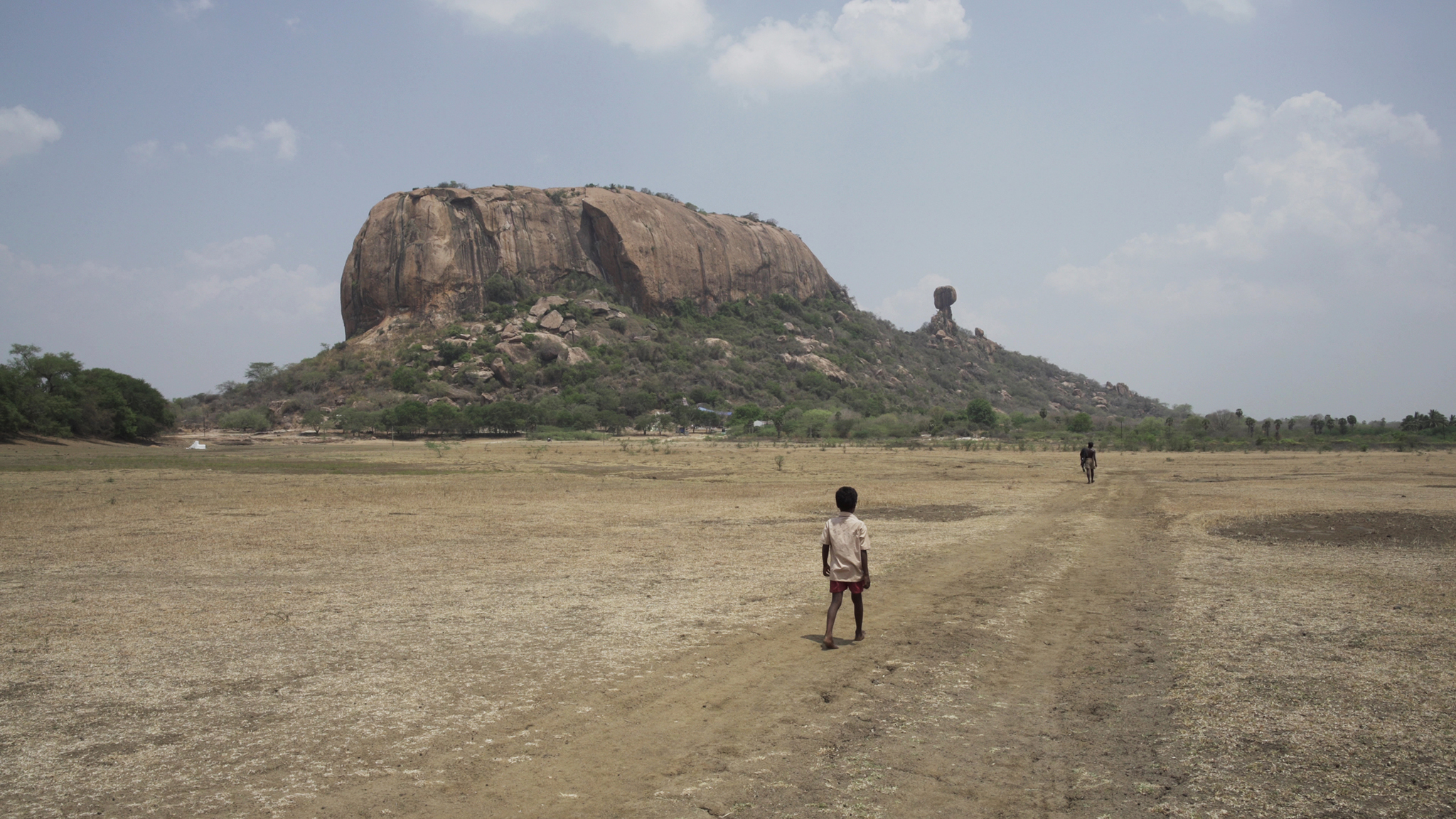 A few years ago, one of my favourite retrospectives of the IFFR happened: a programme strand dedicated to the Tamil New Wave (which led me to discover such filmmakers as Ram, Bala and Vetrimaaran). Sadly, there hasn’t been as much follow-up on that programming in subsequent years, although last year there was the excellent Tamil film Nasir (2020). This winter edition of the festival (it’s been split up in two, with the latter half taking place in June) is a little different: each of the two main competitions boasts an excellent film from the Indian state of Tamil Nadu. One of the low-budget arthouse variety, Pebbles (2021), and one in the tradition of the Tamil New Wave: The Last Farmer (2020).

It’s not exactly surprising that The Last Farmer could’ve easily fit in that programme strand from a few years ago. After all, director M. Manikandan’s debut feature, The Crow’s Egg (2014), was produced by none other than Vetrimaaran and his muse, actor Dhanush. Both his debut and his latest are arthouse films, but with some popular appeal, including songs (albeit old classics rather than new ones). Straddling the divide between commercial and arthouse films is what sets the Tamil New Wave apart and made it so successful.

The Last Farmer starts by establishing the daily routine of said farmer, and then during the credit sequence shows the natural environment surrounding him, showing through rhythm in movement and editing just how much both are in tune. He is Maayandi, the last active farmer of his village and community. Alone he chooses to stick to his old way of life. His land, his crops and his two cows are enough for him, he has no need for money or electricity. After a tree is struck by lightning during an extended drought, the village elders decide a locally traditional religious ceremony is in order, that hasn’t been performed in 15 years. Because Maayandi is now the only farmer left, he is asked to grow the crops to be offered to the local deity.

This seemingly simple plot is used to explore a myriad of issues, while also revelling in beauty. The beauty of the landscape, but also the beauty of work and the beauty of simplicity. Which has to combat against land grab schemes, caste prejudice, police abuse of power and bureaucracy of the court. One subplot deals with the other farmer of the village, who has given up farming after selling his land, of which he used the money to buy an elephant. Apparently this is quite the cash cow, though it was never clear to me just how the elephant earns the family money. The buyers of the land, meanwhile, try various tricks to get our last farmer to sell as well –  he is the last holdout. Through plot lines like these, The Last Farmer also becomes a portrait of a community.

While Maayandi starts growing his crops, his family is heavily involved in other preparations for the religious ritual, including convincing people from a neighbouring village (and another caste) to provide their drummers on the day and to join in the prayer. The leading village elder has decreed that their god will only be placated if everybody prays together, no matter caste, colour, gender or age, to the dismay of a different set of village elders. Their casteism is the reason the ritual hasn’t been performed for 15 years.

This seems to be going alright, until real trouble comes along. Maayandi finds 3 dead peacocks on his land, the national bird. He quickly buries them, so as not to alarm the village (it’s a bad omen). But then he is arrested for murdering the birds, and the wheels of justice slowly start to turn. Very slowly. Despite it being very clear very soon that he is innocent, he has to spend weeks in jail while his paperwork is being processed. And then another few weeks. But, who will take care of his crops in the meantime?

In a way, The Last Farmer feels like an ode to simple farming, the (very) old fashioned way, which slowly turns into almost a parody of the Indian justice system, highlighting one absurdity after the other. At the same time, there’s so much more going on. Including a subplot about a cousin, who is probably crazy but also maybe enlightened, who provides some of the most delightful moments of the film, including a wonderful bit of magical realism. The different kinds of religion, or at least of beliefs within the same religion, fit with the vision of society M. Manikandan creates here. In which there is room for all interpretations of religion, all castes and kinds of people, including a stubborn, deaf 85-year old farmer (played by an actual 85-year old farmer). Yet that ideal is beset on all sides by greed, simple-mindedness, bureaucracy, jealousy and a whole of absurdity. Which ultimately makes The Last Farmer a surprisingly funny portrayal of a society and a people with one foot in the past, tradition and simple village life, and one foot in modernity, complexity and a changing society.

Pebbles is a different kind of film, though it also comes with a Tamil New Wave connection, having been championed by Ram after he saw a rough cut. It now also has won the Tiger Award at the IFFR. It’s the feature film debut of director P.S. Vinothraj. Who based the story, of a father and young son trekking to a desert-like landscape, on a real life incident. Vinothraj was so inspired by the incident that he started working on a script. While he did this, he lived in the area where it happened for close to a year, because he felt the landscape and knowing the landscape were to be an important part of the film. During that year, crew members were added with each state of development, which was carefully planned, from shot composition, to staging to the performances. To make maximum use of a limited budget while shooting under the scorching sun.

That dry heat, beating down on the rocky, sandy and barren landscape, determines life in this rural region of Tamil Nadu. An enraged alcoholic is left by his wife, and picks up their son from school in the middle of the day to take him to her in-laws for a confrontation. After a fight with a stranger on the bus, they have to wait for the next bus. While waiting, their emotional distance is captured wonderfully in a single shot (see above). However, the boy would still like his family to remain together, and decides to tear up their bus tickets, forcing them to walk the long way home. He knows that this trek has a way of tempering moods, just like the way the rocks he puts in his mouth to suck on during such a long, dry walk come out as smooth pebbles. This narrative shift is made using slow motion movement and moody music to signify the dramatic importance, which creates a startling scene, being such a stylistic departure from what we saw until then.

Besides their story, Vinothraj also tells that of their community, who live and survive in this harsh climate. For instance, along the way father and son encounter a family having lunch, who we’ve seen earlier in the film preparing that lunch: by smoking out mice from their holes in the sand, gutting them and roasting them over an open fire. Ultimately, the film closes not with the main story, but with a scene of women waiting by a hole in the ground with empty pots, while one carefully scoops little amounts of water out of the hole, slowly filling her own pot. Just like in The Last Farmer, natural conditions of the landscape dictate the rhythm of life in Pebbles, even more so. At times, is emphasised by how these landscapes are stunningly shot with drones, dwarfing the humans by making them appear tiny in the arid land they navigate.