Banging Our Heads Against a Wall of Netflix data 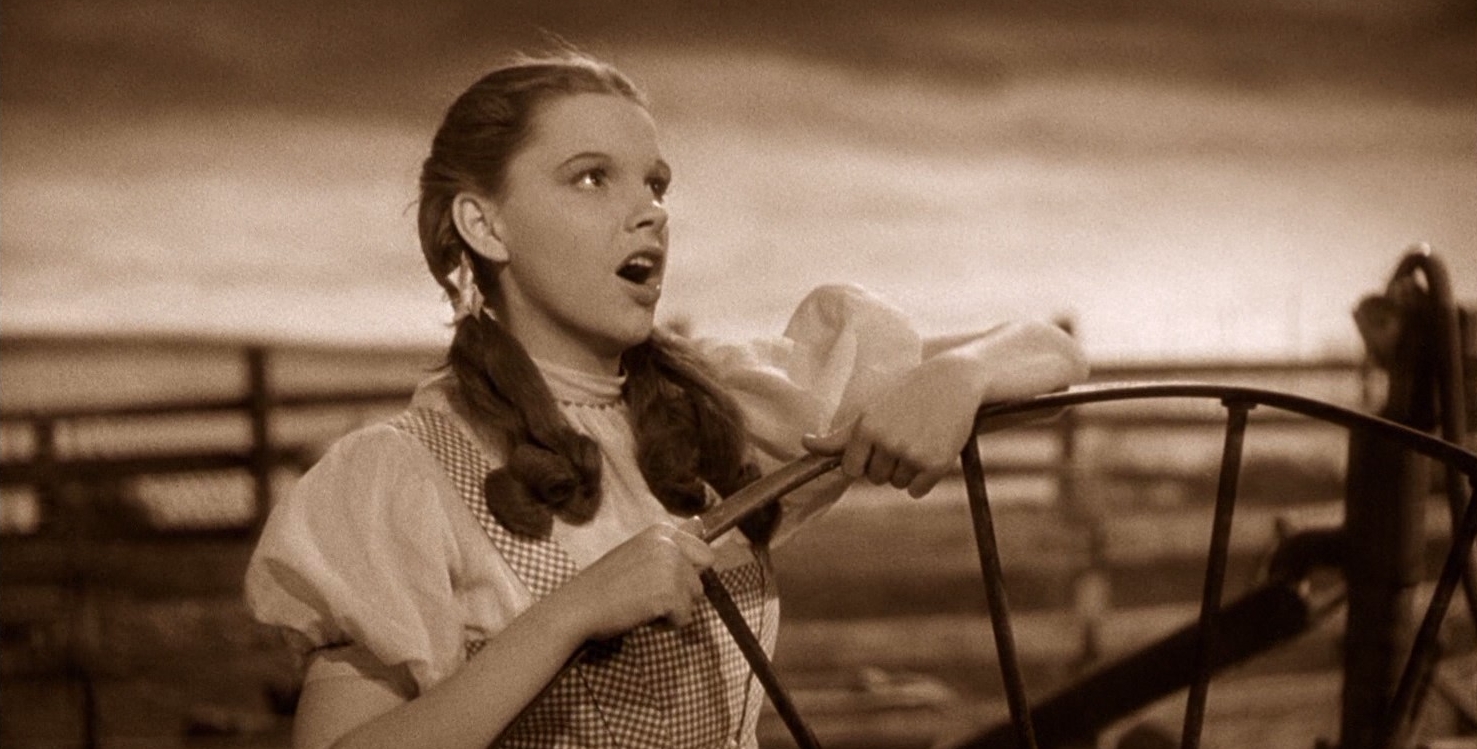 Judy Garland, playing Dorothy in the Wizard of Oz (1939), was one of the first powerful women I admired onscreen. Dorothy was a strong-willed young orphan who would have done anything to save the life of her little dog Toto. During a tornado, she finds herself in an alternative universe of talking scarecrows, witches, and wizards. Director Victor Fleming was one of the first to use what has now become an exhausted story of a character getting a bump on the head which completely changes their way of seeing the world. Since then, television films have used this as an easy plot twist and it’s a simple way to alter a character’s worldview.

Recently, I got to thinking about this trope and I realised that the last two films I have consumed (for lack of a better word) on Netflix have both used the “bump” motif. They are both also self-declared feminist films. One is American – I Feel Pretty (2018), starring stand-up comedian Amy Schumer – the other is the first French-language film commissioned by Netflix I Am Not An Easy Man (2018). Netflix offered these films and so I watched them, almost unthinkingly as one is wont to do with such a system.  Like Dorothy, the characters in these films go on adventures into their own psyche. Unlike Oz, they don’t enter a fantasy land, but a parallel world in which women are more in control than they are now.

I Feel Pretty presents Renee Bennett, a single girl who writes content for a high-end makeup company in an underground office in Chinatown. The film is light-hearted and feel-good. Some of the lines are even quite funny. Bennett does her friend’s makeup and the friend, covered in thick layers of the stuff, complains she doesn’t “feel like herself”, to which Schumer replies, “No, you don’t look like yourself, but you do look like Selena Gomez in that video ‘It Ain’t Me’”.

Renee dreams of two things: Moving to the company’s Manhattan office and getting married. There is one problem. She has no self-confidence. One day, at “soul cycle” (an intertitle at the beginning of the film warns us of product placement), she falls off her bike and gets a knock to her head. When she sees herself in the mirror again, she spies an incredibly beautiful woman. To the viewers, she looks the same. For Renee, the transformation is radical. She goes from a total lack of self-confidence to complete poise. Schumer, who is an incredible actress, makes us believe that she sees total change. In the beginning, she looks at herself with tears in her eyes and sad music. We too believe that she is not pretty. After her accident, we start to believe along with her that she has become more beautiful. Because the camera always focuses on her face, and she looks at us as if we were the mirror, the image becomes strong meta-commentary. On the surface, this film is, therefore, a powerful message about self-confidence.

I Feel Pretty, has been harshly judged by critics. Richard Brody of the New Yorker described it scathingly as “a work of painful, unaware condescension masquerading as encouragement.” Indeed, it is low-budget and shoddily filmed; some of the lines are incredibly artless. A fact that has been much debated and commented on the internet is that Amy Schumer, who plays Renee, is neither fat nor ugly. She is pretty, has long blonde hair, and her body conforms to norms. Bennett’s dream to get married is antipodal to the feminist message of the film. But despite all of this, there is something uplifting about watching a person transform so happily through the very power of thought – thinking as she does about herself in a different way. The film unashamedly promotes life-change through the power of thought, and we at home lap it up like hungry kittens.

I Am Not An Easy Man is the first French-language film commissioned by Netflix. It takes place in 2017, Paris. The main character is not a simpering woman, but Damien, a chauvinist French forty-something man with a healthy disrespect for women. Here again, he suffers a bump to the head and his whole world changes. He wakes up in a place where women are in charge. They do everything men do now. Men are made to dress in skimpy clothing. The scene in which Damien discovers the contents of his wardrobe is quite funny, as he pulls out shorts which say “sexy” on the bottom and endless fancy jackets. The alternative universe presented in this film is well-done and it really opens our eyes. Women do mostly men’s jobs and vice versa: Damien’s love interest, Alexandra – a female chauvinist – is his boss and works as the head of a large publishing company (publishing houses in France are notorious for having mostly female workers and almost inevitably male managers). Considering its low ratings, maybe this film was too radical for a platform like Netflix, but it’s certainly interesting to watch.

Though they are much more modern, neither of the main characters in these films have the sassy spark or individuality of Dorothy. The characters are stock, meant to represent a type of person. Their radical transformation is uplifting for an easy ninety minutes on a Monday night from your couch at home. Much like those popular makeover shows in which people are completely transformed in half an hour, you get a lot of bang for your buck. They make you feel anything is possible. But can you really fit societal change into this formula? There is something strange about this new-found way of exposing feminism. The films do their utmost to make us identify with the characters to learn their lessons, but the fact that these characters need to be brain damaged to do so is perhaps revealing.

While it’s refreshing to see films that question beauty and sexual norms, the problem is that these films place the blame on individuals rather than on the system. Renee just needs to trust herself and feel confident and Damien just needs to see women as human beings rather than sexual playthings. But they fail to push boundaries. As for many Netflix films, they seem at first to be heading beyond these boundaries of convention but then pull back to save themselves from any untoward action. Renee suggests that “some people like to have sex without having babies”, and even that “some babies are ugly”, but that’s as far as they go. Suggesting that not every woman desires to get married, for example, would be taking things too far.

Understanding a bit more about how Netflix works and is run can help us understand why it’s so important for them to stay within the scope of moral conventions. Like any company, they need subscribers, “If we can get each user to watch at least 15 hours of content each month, they are 75% less likely to cancel. If they drop below 5 hours, there is a 95% chance they will cancel.” So they need to keep people glued to the screen. Like so many companies of that ilk, Netflix has invented a sophisticated, analytic programme to evaluate people’s likes and dislikes.

As of July 2018, according to this fascinating source, Netflix has 130 million worldwide streaming subscribers. This information gives them tremendous power. They have data which they can use to make users want more. Their take on the situation is the upbeat, preppy statement “if you keep watching, we’ll keep adding more of what you love” (also above source). The actual situation is perhaps a bit more grim.

The data Netflix uses to analyse what viewers want goes very deep. It aggregates not only what we watch, but how we watch it, including “when you pause, rewind or fast-forward, what time and date you watch, which device you use, where you watch (zip code)” and perhaps most frighteningly, they scan the content of the film you watch to determine your future preferences – analysing aspects like volume, colours and scenery. As long as we’re willing to be this analysed to see “more of what we love”, the techniques to measure that “love” will become more sophisticated.

With these films it seems as though Netflix is trying to cash in on the #metoo movement in a way that is at once as uninvolved and as lucrative as possible; just normative enough to keep its more conservative viewers watching their fifteen hours a month, and just different enough to keep those who think they are progressive to watch their fifteen hours a month. It’s a delicate calculation, but it’s not art. If Judy Garland had lived to see 2018, she would have been disappointed. After all, as Dorothy she once uttered the words, “If we walk far enough, we shall sometime come to someplace.”