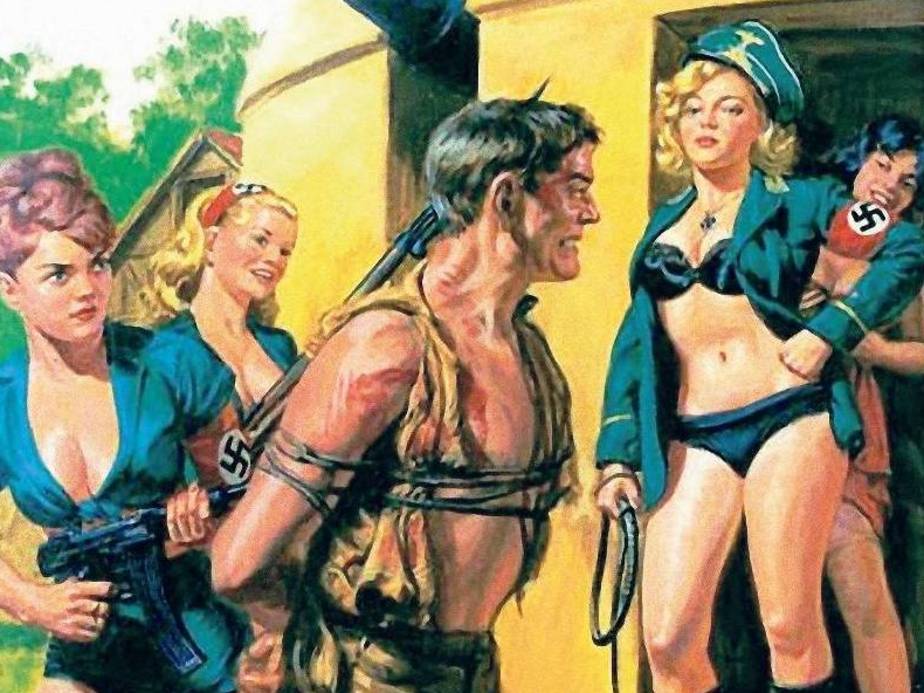 Somewhere, at the end of the seventies, in the bleak post-industrial landscape of Manchester, a band called Warsaw dreamt up these unsettling lyrics:

Through the wire screen, the eyes of those standing outside looked in at her as into the cage of some rare creature in a zoo
In the hand of one of the assistants she saw the same instrument which they had that morning inserted deep into her body
She shuddered instinctively
No life at all in the house of dolls
No love lost
No love lost

Or partly dreamed up as these lyrics for the song, No Love Lost, used an excerpt from the novella House of Dolls. In that disturbing book we get a shocking account of the life of a young girl who is forced into sexual slavery in a Nazi labour camp. The Nazis with their penchant for cruel and euphemistic language referred to these brothels as Freudenabteilung, which can be translated as Joy Division. The same name the band Warsaw eventually adopted and that has since become famous.

These postpunk kids in England weren’t the first or last to be lured by the dark appeal of the Nazis. In 1976, Susan Sontag already laid down some groundwork on this ambivalent attraction in her essay Fascinating Fascism where she tried to understand the dark pull of black SS uniforms and skull insignia. She also traces some themes that pop up in fascist aesthetics like control, pain, enslavement and the power of turning people into things.

That this aesthetic also had a strange pull on the most unlikely of people is the subject of Ari Libsker’s revealing documentary Stalags (2008). Libsker’s film starts as he is doing research on a forgotten pulp literary genre known as Stalags. The production and consumption of these smutty books with lurid covers peaked for a brief period in the early sixties in the then young state of Israel.

Stalag novels have a pretty simple premise. During the Second World War an allied pilot gets shot down over Germany. He ends up in a prisoner-of-war camp, hence the name Stalag: a contraction of the German word Stammlager. Our hero is brutally treated in the camp by Teutonic female guards who sadistically torture him but also use him as a sex slave. The novel usually ends with the protagonist taking revenge on his tormentors.

Delving deeper in this sadistic genre with pornographic undertones, a researcher who is followed in the film finds out that they were apparently written in the US. Some names, that can only be pseudonyms in their outrageousness, keep coming back on the seedy covers: Mike Longshot, Ralph Butcher, Mike Bader. Each cover design leaves little to the imagination. Scantily clad female guards torture a prisoner. Their cleavage prominently on display beneath their Nazi uniforms while their captive looks on in agony. As the search progresses, Libsker finds out that the covers were drawn outside of Israel but that the books were written in the country. The whole craze started with Stalag 13. An instant bestseller written by the elusive hack, Eli Keidar, under a pen name. Earlier he had unsuccessfully dabbled in journalism. In Libsker’s film he talks about how his mother survived the holocaust but never talked about it. Soon other writers wanted a piece of the action.

Libsker interviews a host of people who read Stalags at that time. Trying to uncover the attraction of the smutty books, a male fan puts it bluntly: It was the only jerk-off material around. Another interviewee almost fondly remembers a segment where the genitals of a prisoner are smeared in honey to attract wasps. In the conservative Israel of the early sixties, this seemed to be the only sexual material to be accessible. Some interviewees even say that their first adolescent encounters with sex where through these books.

One of the curious things about the genre the documentary uncovers is that its popularity coincided with the Eichmann-trial in 1961. The violent and pulpy narratives of the books mixing up with the harrowing testimonies of the survivors that Israelis could see on their TV-screens. The trial boosted the sale of the genre. One of the telling pieces of evidence that Libsker finds, is an advert for one of the novels in an Israeli newspaper that was also covering the tribunal.

Inevitably the books became more violent. From the entrapped male prisoners the perspective shifted to that of the Nazi officer in books like I Was A Stalag Commander. The most notorious of the titles was I Was Colonel Schultz’ Private Bitch. A book that was told from the viewpoint of a female prisoner forced to join a camp brothel. Copies of that book were destroyed by the police and the genre quickly lost its readers. But for a time, publishers made a good buck out of the genre. Keidar wanted to branch out and tried to sell the idea to a German company. Unsurprisingly they were less enthusiastic about the whole concept.

The cover of I was Colonel Schultz’ Private Bitch.

It is in the second half of the documentary that things become more complex. Libsker focuses on the writer Yehiel De-Nur who wrote the aforementioned House of Dolls. De-Nur was a holocaust survivor who wrote under the pseudonym Ka-Tsetnik 135633. A reference to the number that was tattooed on his arm in Auschwitz-Birkenau. He claimed House of Dolls was based on the experiences of his younger sister who was killed in the camps. The book predated the Stalags and wasn’t immediately seen as a pulp novel. Remaining hidden behind his nom de plume, De-Nur was the first writer in Israel who wrote in Hebrew about the terrible things that had happened during the war.

De-Nur also has a prominent place in Tom Segev’s fascinating The Seventh Million. In that book the historian looks at the complex relationship Israel had with the holocaust. Shortly after the Second World War and the founding of the state of Israel, many survivors of the holocaust were treated with suspicion and even hostility. The Jews, who had fled to Israel before the war, blamed them for not leaving Europe in time or for not fighting back. Also the circumstances of their survival were scrutinised. What had people done in order to stay alive in such harsh and inhuman conditions?

The Eichmann tribunal proved a pivotal turning point for the Israeli perception of holocaust survivors as all of the horrors of the camps were examined in detail and on television. It was as a witness in that trial that De-Nur became known publicly. His testimony about Auschwitz ended with him rambling about the camp and suddenly collapsing in court. He is still widely known for that incident that shook up the trial.

De-nur collapsing during the Eichmann tribunal.

Segev is very critical about the way De-Nur wrote about what had happened in the camps. Mixing graphic violence with sentimental kitsch he distorted history in the process. But De-Nur was also respected in Israel. In Stalags, Libsker shows that a literary prize is given in his name and that his books are still a part of the high school curriculum. For Segev and Libsker, De-Nur’s books show the complexity of bringing the holocaust to a broader audience and the almost impossible task to meaningfully depict unimaginable events.

De-Nur’s books haven’t fared well critically. Survivors and historians in Stalags point at the damage the books have done. In House of Dolls, the horror is sometimes portrayed in a pornographic and sensational manner. The factuality also remains sketchy. Camp brothels existed for privileged inmates but it was forbidden and a criminal offence for Germans to have sex with Jews. Still the image of the women as forced prostitutes has proved to be popular after De-Nur and after the Stalag craze.

One can carefully claim that Stalags laid the foundation for the Nazi-exploitation films starting in 1969 with Love Camp 9 which centres on a premise that is familiar from the Stalag novels. It led to a wave of sleazy movies that flaunted the sado-fascist aesthetic with varying degrees of coarseness and complexity. The most notorious being Ilsa, She Wolf of the SS that had a string of sequels and rip-offs. On the more artsy side of this wave, one can put movies like Liliana Cavani’s The Night Porter and even Pier Paolo Pasolini’s Salo or the 120 days of Sodom.

But there are also links between De-Nur’s work and more respectable movies. Syndey Lumet’s The Pawnbroker (1964) is seen as a classic film in portraying the holocaust. It was based on a book by Edward Lewis Wallant. Curiously it was also the first large Hollywood film featuring bare breasts to receive Production Code approval. In it the main character is haunted by flashbacks to his time in the camps, and painful memories of his wife being forced into the camp brothel. As critics say in Stalags, these stories about Jewish women being forced into prostitution with Aryan men are mostly fictitious and used as an exploitational tool to deal with what happened in the camps.

Stalags raises some important questions about how to deal with the holocaust in culture. As an historical event that in its unspeakable horrors is hard to imagine it also seems to attract a morbid curiosity. Or as George Steiner said on our fascination for the bloody catastrophes of the last century: “Bending too fixedly over hideousness one feels queerly drawn. The horror flatters attention.” But as we are drawn in we distort or trivialize what really happened. In the end it seems that it has always been difficult to really do justice to the victims without falling back on sensationalist trappings that make for a better sell.