Benshi: Forging a Bridge Between Film and Audience (Or… Between the West and Japan) 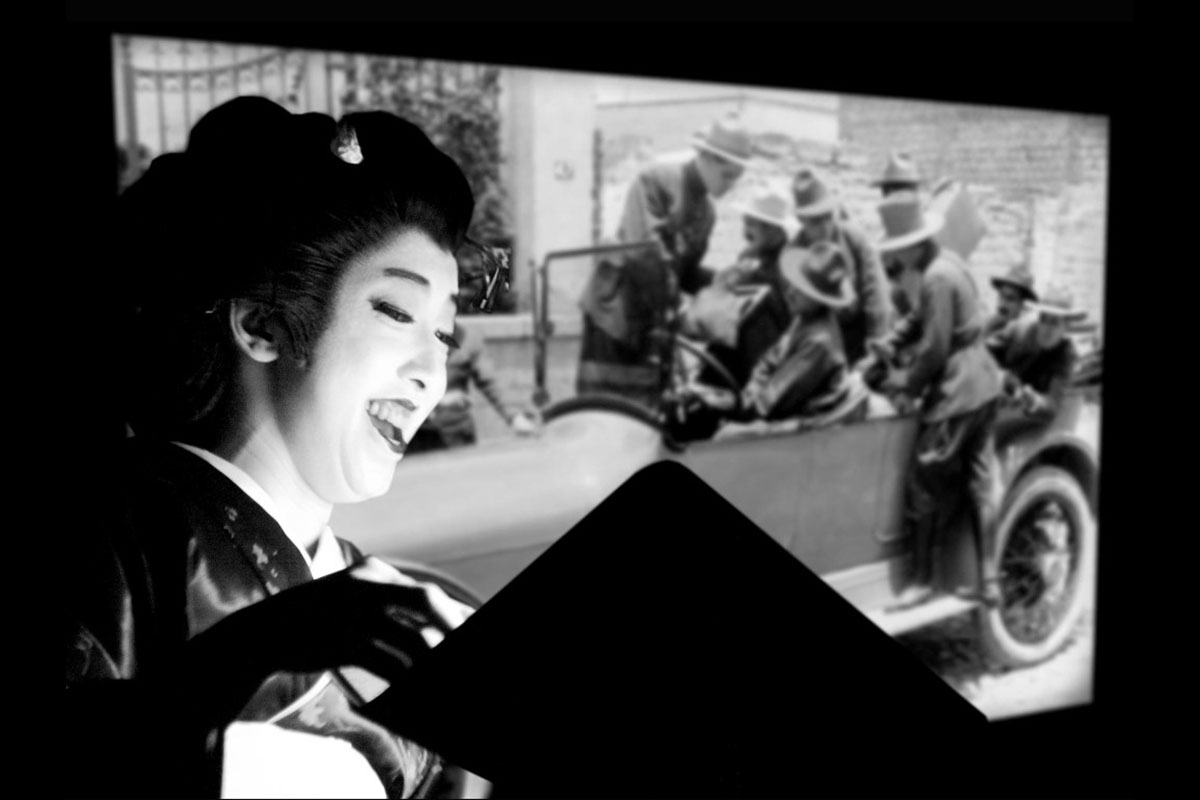 Nowadays, watching movies has become such an immersive experience thanks to an amalgamation of special effects, dialogue, soundtrack, colourful visuals and more – especially in theatres. Before technologies for sound and colour were introduced, filmmakers had to rely on much fewer tools in order to tell their stories to an audience in an entertaining fashion. About a century ago in Japan, the rising demand came for a new component to be added the cinematic experience. One very fascinating role existed for those who could enrich these stories and immerse the audience in the films’ universe. They made up for the lack of sound or colour or special effects by colouring the films with their voice: the katsudou benshi or benshi (‘film narrators’).

Benshi were first required as translators of sorts, standing next to the projector of Japan’s first motion picture imported from the West in 1896. Back then, the concept of moving images was largely considered an exotic enterprise that demanded a mediator to make the device approachable for a Japanese audience. Thus, the benshi’s role at the time mainly comprised the translation of intertitles and foreign phenomena that would happen to be projected. Luckily, an oral narrator wasn’t an uncommon occurrence in Japanese arts – especially theatrical ones. Nō and kabuki theatre were among the popular forms of art in which narration was included, and those existed centuries before film was anywhere close to reaching Japanese grounds. Some Western scholars had tried to claim that Japanese like having things explained to them, and this would necessitate an interest in added narration. However, instead of applying this orientalist approach, we could see narration in the Japanese arts as a way to build upon a story’s immersion. Often these narrative roles would act as mediators, between story and audience, in order to pull those watching further into the diegesis (fictional universe). Something which the benshi gradually learned to do, as the medium of cinema continued to develop.

It didn’t take long for the Japanese to experiment with the craft of filmmaking themselves. Throughout the first two decades of the 20th century, benshi quickly grew in popularity and the continuously developing medium of film in Japan demanded benshi who were more than ‘mere translators’. Both Japanese films and foreign films came to be screened in theatres, both of which were generally accompanied by a benshi. Different branches of film demanded more specialised kinds of benshi. Western films often needed benshi to be educated on Western culture, traditions, language; Japanese films on the other hand may need more added characterisations, detailed descriptions of the characters’ train of thought. A special technique called kowairo even called for benshi to voice the lines of the characters – an early precedent of dubbing still prominent in Japanese popular culture and media today.

In fact, benshi grew so popular that they were often even more highly anticipated than the films they were performing for. Around the 1910s and 20, benshi were an all time craze for the Japanese middle class who’d go out to the theatres in their spare time. Even though they kept evolving into something bigger than simply translators for foreign (predominantly Western) films, the benshi did carry a certain authoritarian and exotic aura with them. They were commonly dressed in Western attire, and held in higher regard as Western film narrators than their Japanese counterparts. Their responsibilities included the translation of intertitles, describing the scene, or occasionally giving background. Aside from merely bridging a technological gap from inserting a voice and narration to an otherwise silent film in theatres, benshi were akin to mediators between devices associated with Westernisation (Japan’s process of adopting Western devices, techniques, and practices) and the Japanese audience.

And this is not even addressing the benshi’s influence on Japanese moviegoers’ perception of films in general. Benshi added a different flavour to the film, background information or silly commentary – some benshi even gained enough prestige to deviate from their original script a little, spicing the screening up with some personal jokes or references for the audience to enjoy. Even if this meant the benshi were more strictly monitored by the police during their performances. The government was getting concerned about their potentially damaging influence on Japanese citizens destined to be educated as respectable partakers in a continuously changing society. It was 1917 when regulation laws were put into place to ensure that benshi stuck to their carefully curated script, and wouldn’t give the audience any wrong impressions – in terms of the film’s narrative or other subliminal societal messages. This just goes to show how much influence benshi were believed to hold, not to mention what influence they actually exerted on the audience members’ experience of a story.

Benshi were translators, they were mediators, they were narrators, they were educators. Needless to say, they were indispensable to the moviegoing experience of Japanese audiences in the early 20th century. Their demand and influence slowly decreased as sound and colour were introduced to the film medium in Japan around the late 20s and early 30s. The silent film and accompanying benshi persisted for a few more years, before they gradually grew redundant and lost popularity. Nevertheless, benshi are an extraordinary phenomenon to consider when talking about film. Surely, the voice acting culture and storytelling traditions in Japanese popular culture today could very well still attest to the benshi’s everlasting impact on the way stories can be told and coloured. Benshi practices such as voicing a character’s stream of consciousness and inner thoughts could be seen as a feature popular in anime and games in particular. In a way, the amount of emotion and dedication that benshi were able to put into their narration can be reminiscent of the emotional and immersive voice acting in Japanese dubs tend to be known for.

Even in modern times, benshi have not disappeared forever – a famously known female benshi Sawato Midori has travelled to festivals across the world to perform her narration. Moreover, the art of narration to which the benshi have added their own flavour, is one that continues to be fascinating to analyse in Japanese media of today.