Berlin: Discordance of a Metropolis 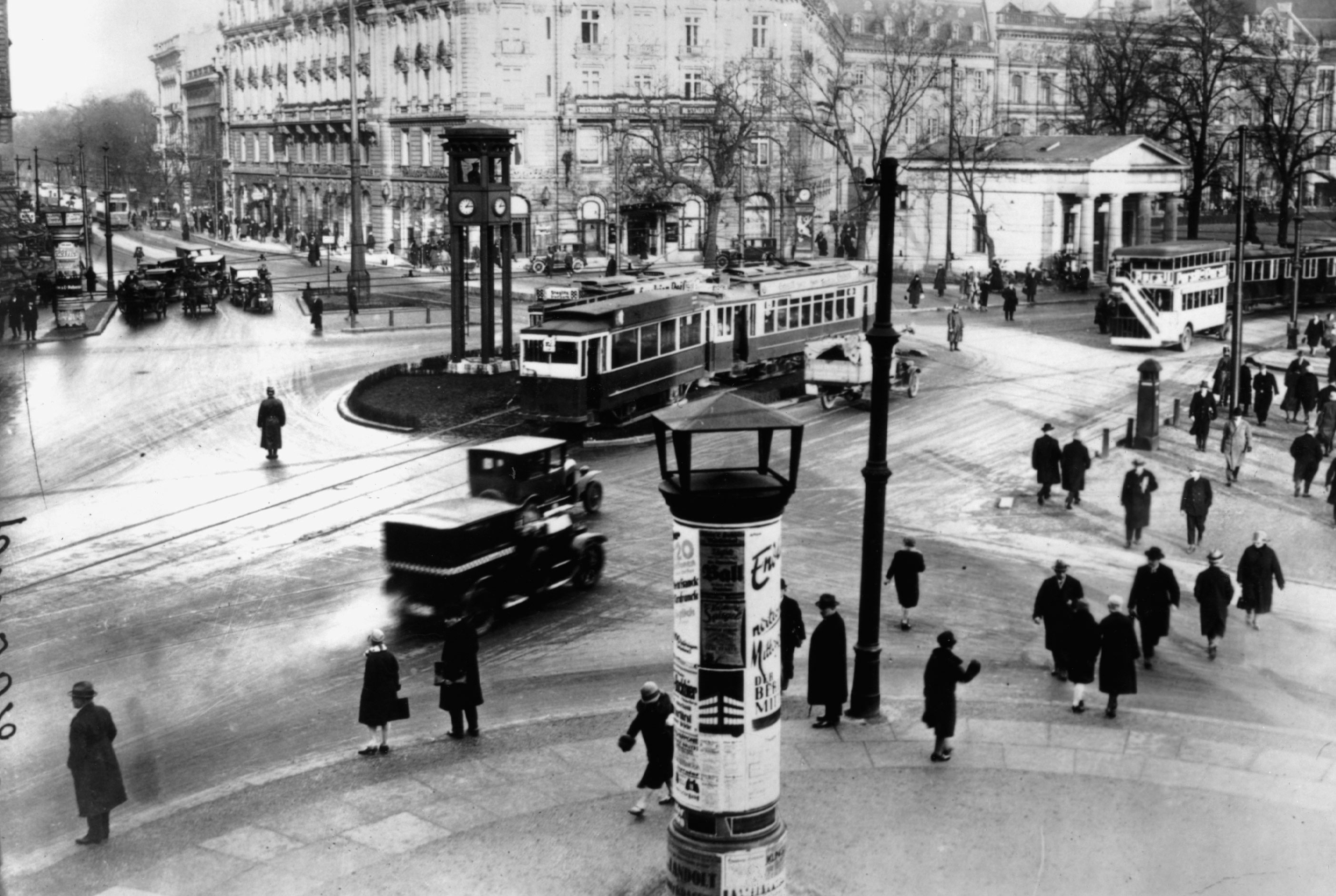 Cities change and so do representations about cities. In the 1920s, the city symphony film was a popular genre. This kind of film portrays the daily life of a city, mainly through visual impressions, without any narrative content. A good example of this kind of film is Berlin: Symphony of a Great City (1927), made by Walter Ruttmann. Seventy-five years later, in 2002, Thomas Schadt made a remake of Berlin: Symphony of a Great City, also in black-and-white. Together, these two representations of Berlin provide a fascinating portrait of a city changed.

City in the Weimar Republic

The original Berlin: Symphony of a Great City was made in 1927, during the golden years of the Weimar Republic. In that time, there was stability and economic security and the inhabitants enjoyed improved living standards, compared to previous years. The film is considered as a special document, since it represents Berlin before it was destroyed during World War II.

The Weimar Republic was a welfare state and that is exactly what Berlin: Symphony of a Great City wants to emphasise. Berlin is presented as a large city where people live in good circumstances. The film shows just an ordinary day in Berlin, starting in the early morning and ending in the late evening.

City with a train network to be proud of

The film starts with fast edited shots of a train with the city of Berlin as the destination. The train arriving in Berlin is almost a euphoric moment, thanks to the happy bombastic classical music. The fast montage is a reference to the Soviet montage theory, but only for aesthetic reasons. Director Ruttmann has claimed that he didn’t support any political or social ideas of Soviet filmmakers.

Back to the train again. Berlin: Symphony of a Great City is divided into five acts, and in every act, the train seems an import theme. Every act contains shots of trains, with which Ruttmann wants to show how proud Berlin is of its train network. You can go anywhere by train from Berlin. Even Milan can be reached by train!

But there is more. Berlin has also an airport, public transport facilities, and a good road structure, of course. Even if you had a night out, a tram will bring you back home safely.

Berlin is an industrialised city. It not only has trains, but a lot of other machines that make life, or labour in particular, easier. The city contains a lot of industry. New buildings are built with a little help of machines, light bulbs are made very fast by machines, bottles of milk are filled easily by machines. A bakery bakes dozens of baguettes per time, thanks to a machine. Machines can fulfill the wishes of Berlin’s inhabitants in no time.

Does this mean that human labour is not needed anymore? On the contrary! Berlin: Symphony of a Great City shows that there is a lot of employment in Berlin, in different kinds of areas. Shop owners open their shop in the morning to serve their customers, waiters and chefs work as fast as they can to satisfy their guests, and office employees type so fast on their typewriters that it makes you dizzy, as a montage of a spinning hypnotist’s wheel shows you.

Berlin seems to be thankful for the work employees deliver. The city offers a lot of facilities to fill your spare time with. You can go to the zoo or a park, have dinner in a restaurant, watch a horse race, or practice a sport by yourself, such as swimming, sailing, or rowing. In the evening, the lights of Palast Film cinema light up the city. People can enjoy music from an orchestra or watch a dance show too.

The 1927 version of Berlin: Symphony of a Great City presents Berlin as a perfect city. Everybody lives under good circumstances and can enjoy basic necessities such as work, food, shelter, and amusement.

However, some scenes seem to criticise this perfect picture of Berlin. In the fourth act, a man is sitting on the pavement, with his head bowed towards the ground. People are rushing by, but the man keeps sitting in this position. The employee seems not happy at all, although he lives and works in a city that has everything you need.

In this same act, another man opens the paper of that day. Some words leap up from the page: “Krise” (crisis), “Mord” (murder), Börse (markets), “Heirat” (marriage), and then six times “Geld” (money, money, money). These words are followed by a chaotic compilation of shots from a train rail, a revolving door, a roller coaster, a cyclone of leaves, a spinning hypnotist’s wheel, a woman on a bridge who looks very anxiously to the river beneath her and a shot later it seems that she jumped into it.
Even in a city like Berlin, where everything seems to be well organised, things go wrong. Too much focus on welfare makes people unhappy, or even desperate. And this was only the beginning of what would follow.

The remake of Berlin: Symphony of a Great City was made in 2002. A time of cuts and economic recovery. It was the year after 9/11 and a new parliament was about to be elected by the Germans. But most of all, it was a time of a lot of frustrations, anger, and dissatisfaction, as Schadt shows.

Berlin: Symphony of a Great City (2002) starts where the 1927 version ended: on a sparkling night with fireworks. The music is less happy and euphoric than in the original. The electronic music creates a sad, sinister and uncanny atmosphere and you already know that this is going to be much different film than its predecessor.

In the past 75 years, a lot has happened in Berlin. The remake shows references to World War II, such as Checkpoint Charly, Sachsenhausen, a Jewish cemetery and the Soviet memorial in Treptower Park. It also contains both archive materials and contemporary shots from the wall that divided Berlin between 1961 and 1989. The city didn’t get to remain a peaceful, successful and safe place.

Berlin anno 2002 isn’t the city where there is enough employment for everyone. It isn’t the city where everyone lives a happy and carefree life. In 2002, there are homeless people who live on the streets, who are sleeping in bunches and have to waken up by the police and who are lucky if they can get something to eat at a charity station.

On the other hand, Berlin is the city of glitter and glamour. The rich people celebrate their exclusive parties, enjoy dinner at chic restaurants, and go shopping in expensive shops. Fashion shows are held in Berlin and actors are coming to Berlin for the ceremony of the Deutscher Filmpreise. The differences between poor and rich are extremely clear.

City of youth culture and dissatisfaction

Of course, there are still trains driving from and towards Berlin. So are cars. Tourists from all over the world come to visit Berlin and its rich culture. Musicians play on the street, African people dance their dances in public, an orchestra plays its tune and festival visitors dance around the Siegesaule. It’s a free city, where cultural expressions are allowed.

So you can be yourself in Berlin. In the remake, different kind of alternative youth cultures (such as punks and skinheads) are represented. Whereas everybody looked almost the same in 1927, Berlin’s society can now be divided into several groups, with each having their own style.

In the 21st century, you’re allowed to raise your voice if you are not pleased with society as it is. And, apparently, there is a lot to be dissatisfied with. While immigrants try to get a residency in the free and safe city of Berlin, people demonstrate against racism, police terror and human rights. After all, the slogan ‘Bullen raus aus Kreuzberg (in English: ‘Bullies, go away from Kreuzberg (a district in Berlin), doesn’t sound very welcoming to the new inhabitants of Berlin.

Berlin is represented as a city of seduction. Multiple shots show the production of drugs, cigarettes, and alcohol. While industrialisation was a good thing in 1927, it is a threat in 2002. Machines produce stuff we can get addicted to and, moreover, there are one of the reasons why the unemployment is so high these days. Machines replaced the employees, which we can see in futuristic shots.

On the streets, people are surrounded by advertisements, for Magnum, Durex, and the upcoming elections, among others. You can go into a club where ladies do pole dancing or dance all night long if you want. People have sex on the street or at a bus stop. Seduction, parties, and sex is that what the neon letters ‘Berlinisch leben’ (‘Berlin way of life’) mean?

Both the 1927 and the 2002 versions end with fireworks, however, it seems there is not much to celebrate in the modern city. The sinister music continues. Hopefully, Berlin will develop itself in a positive way. I’m looking forward to a third remake in 2077.

This Essay Framing the City article was published in January 2018