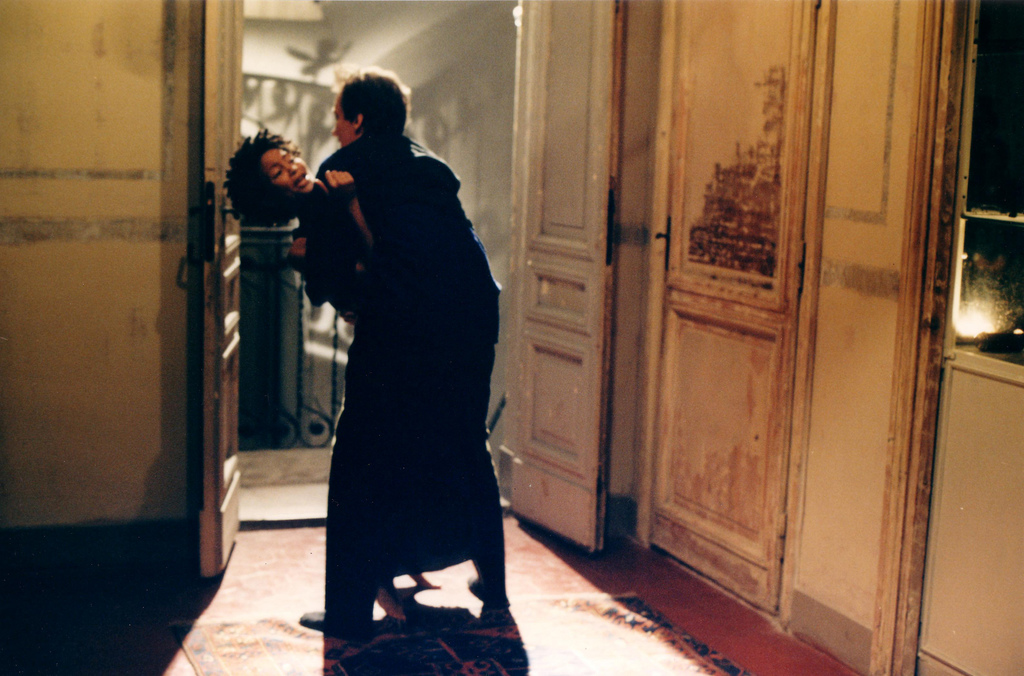 When someone mentions Bernardo Bertolucci, Besieged (1998) is rarely mentioned. A cinephile will immediately start talking about 1900 (1976), Last Tango in Paris (1972), The Conformist (1970), maybe even The Last Emperor (1987), or The Dreamers (2003). If they are extremely cine-literate, they may mention the famous Italian co-wrote Once Upon a Time in The West (1968). Besieged is mostly forgotten.

Upon release it was met with a cold shrug; critics stressed that the film was all style, no substance. The story of Besieged, to be honest, is slight: it could be summarized upon a tiny napkin and Besieged does indeed focus almost entirely on its visuals. The thing is though, in Besieged, the style IS its substance. The film is all about appearances, spaces and surfaces: that what is shown. The true meaning lies in that was is not said, omitted and hidden from view.

The two people dancing around each other and their feelings for one another are Jason Kinsky (David Thewlis), a wealthy composer and piano teacher, living off the inheritance of his deceased aunt in her villa in Rome, and Shandurai (Thandie Newton), an African refugee working as a maid for Kinsky and living in his basement. Early in the film he confesses his love for her and when he aggressively asks her what he must do to win her love she replies, in the spur of the moment, that he should get her husband out of jail. Which he proceeds to do, by selling all his belongings and investing the money in a diplomatic mission.

The two, while partially aware of each other’s motives and true feelings, never talk about the situation at hand. They don’t even mention the fact that there is less and less to clean for Shandurai each time Jason sells another one of his late aunt’s trinkets. Their feelings of indebtedness, annoyance, selflessness, doubt and love are never spoken out loud, and neither is the past of either protagonist, but Bertolucci proceeds to show the blossoming relationship entirely through editing, camera-work and spatial composition.

Floating in Time and Space

The lingering camera shows the longing of the characters, slowly pushing in from a wide-frame to a close-up, in a floating, dancing movement as if their hopes and dreams dictate the direction. Shandurai’s longing is foremost for her home-country and husband. After the dreamy camera flirtatiously dances up to her resting face, a cut shows us helicopter shots of her home country, the camera still floating. It is as if the dream state Shandurai is in expands to her current surroundings.

When Shandurai begins to fall in love with Jason, the camera also begins flirting with him, speeding around him, showing him as this magnificent slapstick character. When he longs for her, again the camera moves from wide-frames to close-ups in a similar manner. Love makes the spaces feel wobbly and airless, and the same goes for time.

The camera keeps speeding up and slowing down at dramatic moments, emphasizing the floating direction, as if the camera itself is falling, in love perhaps. The feeling that time grinds to a halt or speeds up according to our own feelings is explored in this way, even further emphasizing the humour Shandurai sees in Jason, by literally speeding him up to Benny Hill-like speeds. That the slowing and speeding up of time is not just pleasurable, but can also be horrifying is shown by similar shots when tragedy kicks in, showing the trauma of fear, anger, sorrow and disgust as the same kind of falling, sinking feelings entirely through its visuals.

In a similar way Bertolucci uses jump cuts to explore the ambiguous nature of feelings by adjusting time. When we first see Shandurai in a traumatized position, she wets herself and starts crying. The outburst of bodily fluids and emotions is projected onto the film itself, using severe jump cuts to show her state of mind. Even as a refugee in Rome she gets panic attacks, violently vomiting the fear out of her system, and again jump cuts abrasively cut into her and our awareness of time and space.

Later in the film, when Shandurai falls in love with Jason, jump cuts are put into effect in a more pleasurable way. When cleaning the house and dancing around, time is omitted to show us how quickly time seems to fly when in love. The effect of the jump cuts also calls in mind the musical montages of the 80s, the staple of fun poppy romantic comedies and films in which action heroes get their karate training. Time flies when you are having fun.

The same goes for Jason. He never again, after that first time, says to Shandurai that he loves her, and he never tells her everything he is doing for her. Furthermore, all the transactions and actions Jason does, are never shown to either Shandurai or the viewer, as the film is seen mostly through her point of view. We know what he does because his apartment keeps getting emptier by everything he sells to pay for the release of Shandurai’s husband, but the actions are kept off screen.

The same goes for several other important parts of the story. Shandurai’s flight from Africa to Rome is only alluded to through a dreamlike poetic image in which we travel through time and space. First the traumatized Shandurai is in Africa, looking up at a plane, and the next shot is of ceiling structures and windows that at first seem to resemble the interior of a plane, which the sound also alludes to.

It turns out to be Shandurai’s apartment in Rome, in which she is dreaming of planes and war, the sound of the engine jets now an auditive illustration of the traumatic noise in her head. In the same way, Bertolucci uses shorthand to omit important scenes: the implied consumption of Jason and Shandurai’s love is shown through the act of taking off his socks and a post-coital nap, and the final decision Shandurai needs to make between him and her husband, is entirely left up to the viewer as Bertolucci cuts to the credits.

It is up to the viewer to fill in the spaces between, even in minor jump cuts. We need to interpret the visuals to grasp everything going on in the minds of the protagonists. Much in the same way that Jason needs to interpret Shandurai’s action to see her true feelings, and Shandurai needs to watch the ever-emptying space to truly understand what Jason is willing to go through for her.

The Spaces In Between

The fact that the in between spaces, all these small visual cues, are so important to the relationship is also shown by literally emphasizing the spaces in between their two apartments. Shandurai, living in the basement of Jason’s palazzo, and Jason inhabiting the upper floors not only allows Bertolucci to allude to their upstairs-downstairs relationship as upper class and lower class. It also gives Bertolucci ample reason to stage their blossoming relationship almost entirely in the hallway, where a huge staircase spirals up and down as a pure poetic visualization of lovers approaching each other through the stairways (from heaven) as shown in many a Hollywood musical years before.

By using the stairs to show the spatial relationship between the lovers, Bertolucci can show, in a visual shorthand, who has the upper hand in the romantic cat and mouse game, and can also let the lovers longingly pine for each other from a short distance. In the same way, the small dumbwaiter that connects their apartments, and that Shandurai uses as a stand-in closet, is an in-between space that is used as a romantic battlefield. First Jason’s use of Shandurai’s dumbwaiter is an invasion of privacy. Later it becomes a way to communicate easily. Again, the shifting of the meaning of space represents the stage of their relationship.

The Siege and the Striptease

The tolls taken for love are represented by the stripping of Shandurai and Jason’s living space. That the house eventually turns into a blank canvas, gives Bertolucci the opportunity to show the humongous effect love can have on someone’s life and surroundings. The stripping of the house is similar to the romantic ‘striptease’ that the lovers are involved in, and eventually the stripping of the film, where the cuts and omissions are like pieces of clothing left behind and scattered over the floor. Like socks perhaps.

The emptying of space and the omission of time in this relationship is in this way almost as traumatic to the vista of the film as the trauma itself was. Not only is Jason’s house besieged, but later in the film Shandurai gives her body to Jason. We don’t know if it is out of love or out of a feeling of obligation, and this ambiguity is stressed even further when her husband comes home from Africa shortly afterwards, and we never see the fallout of Shandurai’s decisions or which man she chooses. Bertolucci brings the story full circle shortly beforehand: was her period of trauma introduced by Shandurai urinating and a jump cut, the end of her love(s) is announced by Shandurai having a wet dream and a jump cut.

The siege of the title is thus not only in the emptying of Jason’s house due to its occupation by Shandurai, the actions surrounding Shandurai’s body (always shown as bursting, through vomiting, urinating, crying and ejaculating), the omission and dilation of time (through jump cuts and slow-motion) and space (the ever emptying in-between spaces in Jason’s house), but also of the narrative.

It’s up to the viewer to not only fill in the gaps in regards to the motivation of the characters but also of their final actions: what really happened between Jason and Shandurai? What is going to happen? Who will she choose? By ending the film in an unresolved cut, the one to the credits, the siege of the title is complete. To truly grasp the disastrous and destabilizing effects trauma and love has on the protagonist, we as a viewer also need to experience it. In the end, we are left as empty-handed and shaken to the core as the characters are.