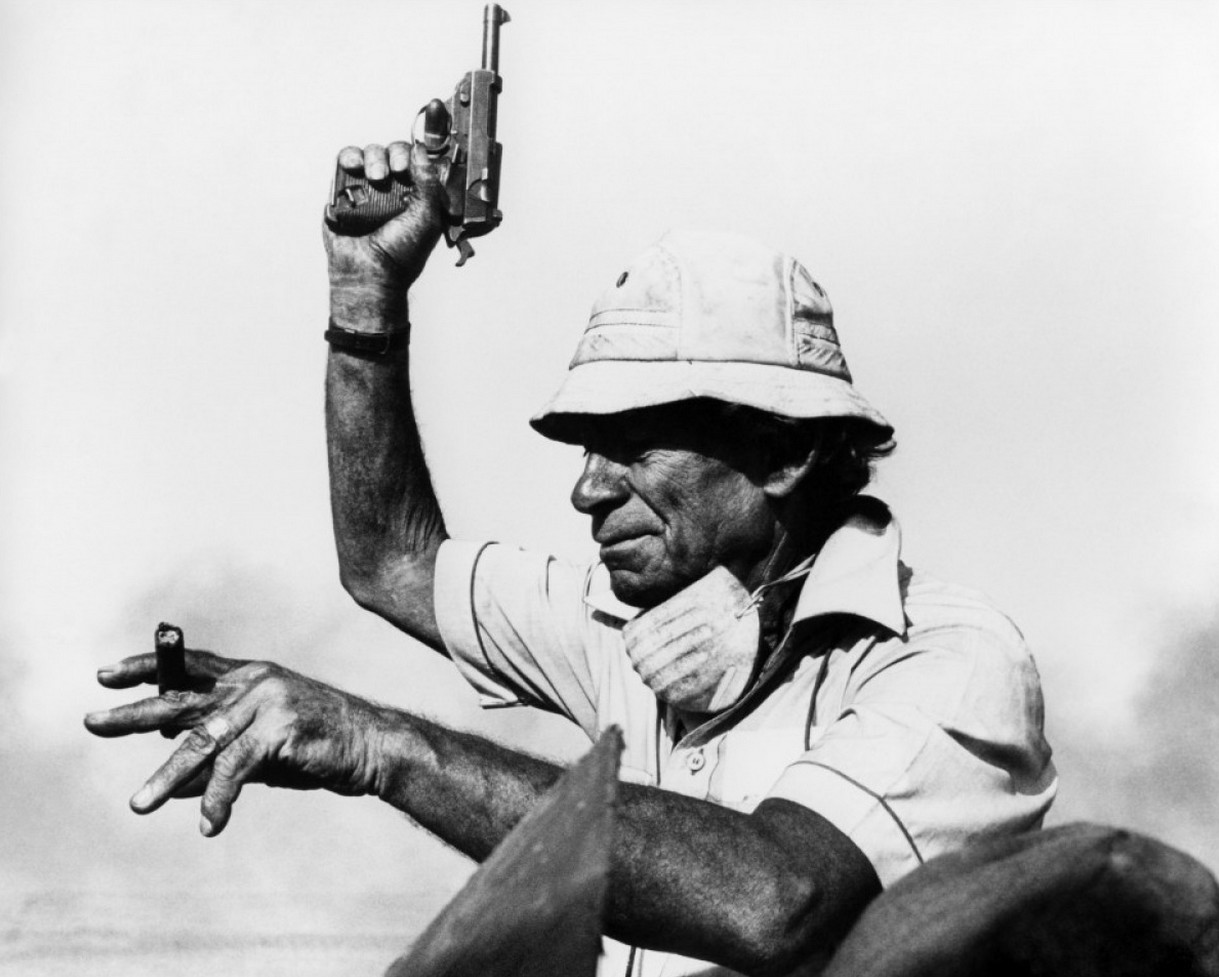 “There are no heroics in my pictures. These are the survivors of war, and they do what they have to do to survive”, Sam Fuller said on his war films. As Christopher Nolan’s war epic Dunkirk (2017) is being released in cinemas worldwide, Frameland recommends the war films of classic Hollywood director Sam Fuller. Whether or not you plan on seeing Dunkirk, or already enjoyed it or not, Fuller’s war films deserve your attention.

Fuller served in in the Second World War and worked many of his experiences into the screenplays of his war films. Combining this perspective with his sensibilities for direct and sensational yet honest storytelling, his war films are unique in (Hollywood) film history. It’s no coincidence that, of the 22 films he made during his long career, seven are war movies – a full third of his oeuvre. He made the first two of those in 1951, The Steel Helmet and Fixed Bayonets, about the war in Korea – while that war was still raging on. Gene Evans and William Chun in The Steel Helmet

Honest about what war really entails, The Steel Helmet is perhaps one of the greatest war films of all time. Fuller focuses on the dynamics in a group of racially diverse soldiers. Gene Evans stars as the cynical bully Sergeant Zack who survived a Korean ambush thanks to his steel helmet. The hard-boiled sergeant, chomping a characteristic cigar and in the company of a (South) Korean boy, runs into his ‘new’ platoon taking shelter in a beautiful buddhist temple.

The Steel Helmet is not just a cynical anti-war movie but also smartly criticizes American society. Sgt. Zack is a typical racist who claims he wants to kill as many ‘gooks’ as possible. But then he more and more gets a liking for the Korean boy he calls “Short Round”.  Additionally his new platoon, which he doesn’t seem to care much about, has a black medic and a Japanese-American soldier. Something Fuller frequently points out to the viewer, especially when a captured Korean tries to use this against the platoon telling the medic he is a fool fighting for a country where he is a second-class citizen.

The power of The Steel Helmet is in its portrayal of war as graphically violent, in the contradictory peaceful setting of a temple. It is grim, brutal and not glorifying any of the events. While showing that American societal problems are just as present in an American platoon on the other side of the world as they are back home. The success of the independent The Steel Helmet got Sam Fuller a contract with big film studio Twentieth Century Fox, giving him access to a bigger budget but less artistic freedom and control. He had to start with another picture set in the Korean War. Filming Fixed Bayonets! took four times as long as The Steel Helmet, with six times the budget.

Fixed Bayonets! is a more traditional war film, a classic heroic “last stand” scenario and more focused on the collective than the individual. A platoon of 48 men is left behind to conduct a very dangerous and likely fatal rear guard defense of a snowy mountain pass in the Korean winter against a large oncoming Chinese army. Gene Evans appears again as a gruff sergeant, but his Sgt. Rock is a friendlier, more ideal version of his Sgt. Zack from The Steel Helmet.

Though Fixed Bayonets! is less cynical than its predecessor, it has the same immediacy and dramatic tension. The soldier’s sacrifice here is more noble and courageous here, but still planted firmly in the deadly the futility and ugliness of war. A war that still mostly consists of waiting for these restless men, that they fight without knowing why. There is a clear mission to fulfill this time around, but still no clear ideology and the faces of the survivors are similarly exhausted and without drive by the end. A scene about dealing with frostbite comes verbatim out of Fuller’s war diary.

Hell and High Water is one of Samuel Fuller’s less-discussed films. Fuller even considered it his least favorite film in his punchy autobiography A Third Face. Hell and High Water is often maligned for its stiff anti-Communist rhetoric. A committee of scientists from around the world gathers in Paris to address the Commies use of nuclear weaponry. They enlist Adam Jones (Richard Widmark), an ex-Navy captain and now mercenary-for-hire, to commandeer a refurbished Japanese submarine and to steer a scientist (Victor Francen) and his assistant (Bella Darvi) through neutral waters to uncover a Red Chinese base for atomic warfare.

Despite its propaganda, Hell and High Water, a minor film, has one appetizing quality: its CinemaScope compositions. As Fuller’s first ‘Scope film, Hell and High Water is counterintuitive. Why would you use a wide frame to shoot a film that almost completely takes place within the cramped quarters of a submarine? Nevertheless, Director of Photography Joseph MacDonald creates dynamic shots that play with the spatial arrangement of characters on different planes of an image. And look, for example, at the way the submarine’s deck nearly extends from one side of the frame to the other in a shot in which the vessel rises to the water’s surface after dueling and sinking a Chinese submarine. In ‘Scope, the claustrophobia of the space is vast. This is the Sam Fuller film Godard must have been channeling in Pierrot Le Fou (1965), a wild fracas of images, plains, songs and gunfire, of sets and rear projection destroyed by purpose. Soldiers framed against the same ruins, only moved through space by an edit, the senselessness of war and nationality in ten seconds. Gene Barry, who defeated aliens in War of the Worlds (1953), is scared of a threat from within, his own genes and prejudices. He’s afraid of communist brainwashing and won’t adopt his Chinese son, conceived with Angie Dickinson, whose bloodline was hidden by her caucasian looks. Nationality and ideology all look the same in the dark.

Barry doesn’t want to loosen his grip on his hatreds until it’s too late, while Nat King Cole, face like leather, voice like silk and sand, stands as his tolerant opposition. They crash through the gate together while the French and Chinese perish, a suicide mission that’s part Bridge on the River Kwai (1957), part Apocalypse Now (1979), and all Fuller. Only he could have a romantic reconciliation seconds after former lovers strangle a man to death. His cigar-ash poetry is thicker than the studio jungle: “Don’t stop on your way out to pet my son like a dog.” “Don’t dig his grave because you can’t stand me.” Under dirt, we all look the same. Fuller’s first film about the Second World War, or rather the tail end of it. Except for the opening scenes and credit sequence, this film is not a combat film, focusing on the peacetime just after the war. There is a lot of archive footage in this movie, both in the opening battle scenes and of the Neuremberg trial, being a more low-budget film than Fullers last war picture.

Sgt. Brent gets wounded just as the war ends. Young German woman Helga takes him in and heals him. He falls in love with this Helga and stays in Germany after the war is over. He’s accused of being a two-faced liberator, being in charge of food distribution, and replies angrily that the Americans didn’t come to Germany as liberators, they came as conquerors. Despite this bluster he’s a gentleman and a bit of whiner, not at all like the gruff soldiers in previous Fuller war movies. He’s a lover, not a fighter, getting shot in the back while he stares at Helga.

As the story unfolds, he increasingly becomes less central to said story, signifying his weakness. His anger is no match for that of the young Germans who join the Werewolves, an underground organisation that aims to bring Hitler’s Germany back. And the real drama turns out to be between Helga, her younger brother and her neighbor, and their involvement with and struggle against the Werewolves. Three thousand men go into the jungle and only a hundred make it out alive in Samuel Fuller’s based-in-reality account of the 5307th Composite Unit (Provisional) and their campaign far behind enemy lines in Burma in 1944. Marching hundreds of miles through swamp, jungle and mountains, the men suffer from mental and physical exhaustion, malnutrition, and disease in addition to vastly the superior numbers of the Japanese army, met in three structuring battles of increasing desolation. The story focuses on one advance platoon, led by Lt. Stockton (Ty Hardin), a recently promoted former NCO beloved by his men who has a touching father-son relationship with the unit’s commander, General Merrill (Jeff Chandler).

Fuller amplifies the unit’s sense of isolation: in reality they were working more or less in coordination with Chinese and British forces and native Burmese scouts. Instead, aside from one Filipino veteran and interpreter (Pancho Magalona), this is an all-white crew marching through the jungle for reasons they don’t quite understand. Warner Brothers tacked on a parade ground ending, against Fuller’s strong objection. He leaves the story before the final victory, because this isn’t a film about glory or heroism, it’s about the will to keep fighting, to keep moving, beyond any reasonable human breaking point. It’s not a war movie, it’s a horror film. Arguably Fuller’s most personal film, dealing with his combat-experiences during WWII. A period in his life that left an indelible impression and strongly influenced his no-nonsense attitude towards work and life in general. Focusing on the US 1st Infantry Division (wearing a bright red ‘1’ insignia), and headed by the stoic Sergeant (Lee Marvin, himself also a WWII combat-veteran), the soldiers fight on African and European battlefields, and even participate in the liberation of German concentration-camps. The unit’s men are unseasoned soldiers, mere boys, but Sergeant’s tough love and their often harrowing fighting experiences soon turn them into battle-hardened veterans, wise beyond their years.

The Big Red One shows the emotional and moral effect of the omnipresence of death during war on people. As the film’s tagline states: ‘The real glory of war is surviving’, cynically sending up any heroic notions regarding war as outright delusional. Central characters are Zab (Robert Carradine), an aspiring writer closely modeled after Fuller himself and Griff (Mark Hamill), a young artist who sometimes freezes up under fire. That is, until he is confronted with the grim reality of the German death camps. Casting the young Mark Hamill as Griff was inspired, as if Luke Skywalker is finally confronted with the face of true evil, not in some distant galaxy, but in the darkest nightmare in human history. If you can, watch the restored version, released in 2004, with 49 minutes of added footage, cut for 1980’s original release.