Black Mother: A Film That Thinks and Looks Back At Us Without Blinking 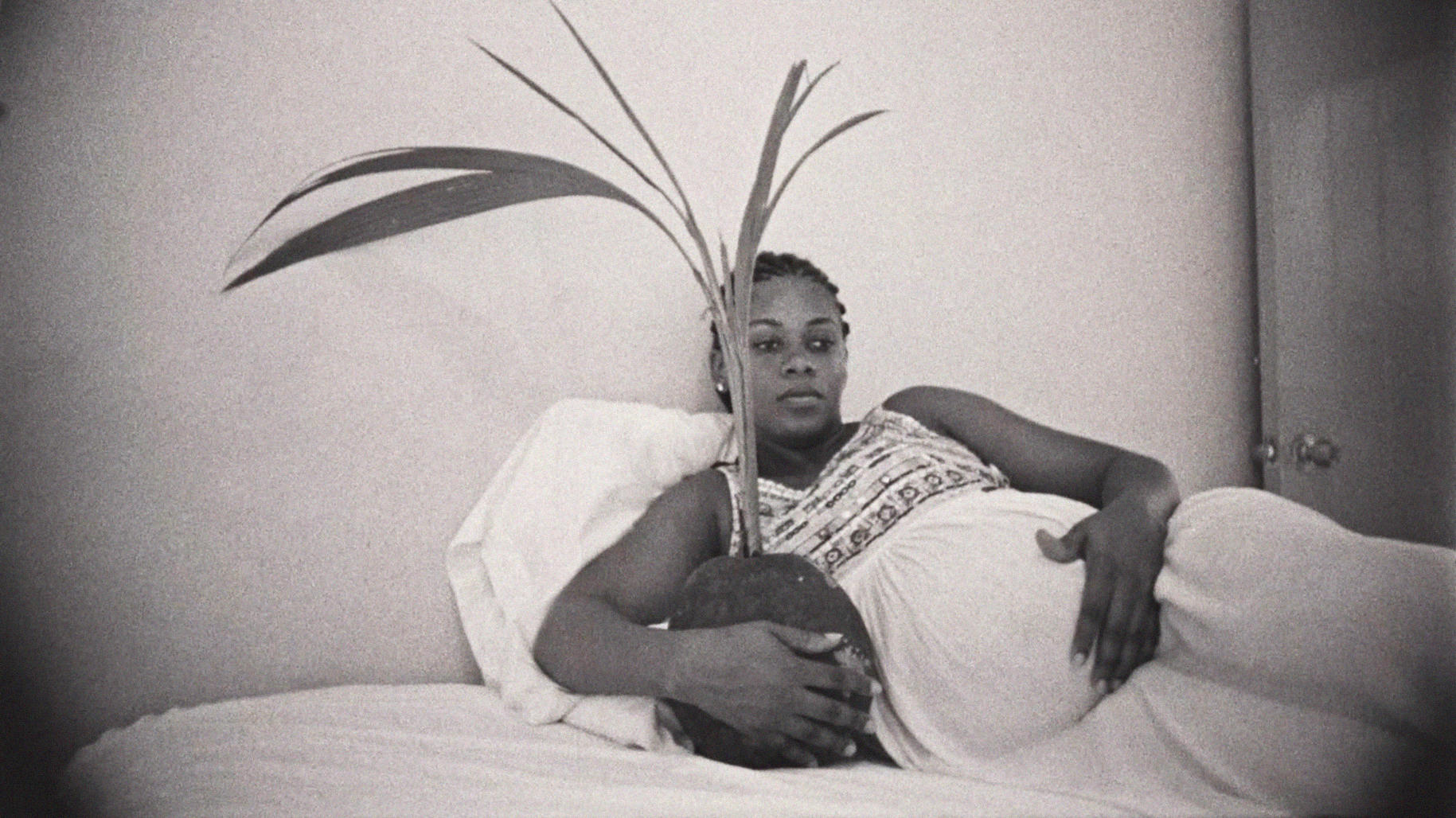 Black Mother (2018)
Kent Jones,
Can Movies Think?
“…which put me in mind of a question posed by James Wood in the Times Literary Supplement: ‘Can novels think?’ Wood had James’ The Wings of the Dove in mind, and he was wondering if that novel’s massive accumulation of details and possible courses of action and reaction for its characters made it, in essence, smarter than its author. In other words, does the work itself, as opposed to its creator, engender within the reader an ever-expanding consciousness of the parameters of human experience?”

Khalik Allah’s aesthetic arrives, wet from birth, but his, in his music video for Masta Killa’s “Things just ain’t the same.” It initially appears to suffer by dent of low-grade video, but then the high-resolution DSLR footage appears about halfway through. This was a choice. The man and his environment were preserved in many different formats and Allah was building a shifting, breathing portrait of him, as alive as the man in the image. Allah’s work feels like it’s being created in front of you as you watch except that every moment is so dense. In 2015’s Field Niggas he incorporates his own stream of consciousness into the found audio that constitutes the film’s soundtrack, as if his spiritual ruminations and autobiography were as much an accident as the venomous diatribes and descriptions of sex and drug use he caught his photographic subjects discussing. His point was that they were equal, and his self-professed quest to be Christ-like in the way he researches his subjects, to spend time with the poor and homeless and erase the distance between them, means treating himself as one of them. His thoughts and the strange candidness with which he talks about his own previous work with one of his regular subjects pushes the film to a place of uncanny objectivity. He doesn’t talk like he’s become his own subject, he’s as much a piece of the enveloping texture as any of the haunted stares or screamed obscenities. He’s placed his own thought process and vomited testimony next to the sound of streetcars without appearing to have meant to do it, though obviously he did. Allah’s films are like the Pyramids, you can’t imagine how someone did all this, but there they sit.

Having answered Kent Jones’ question about whether movies can think (they can), he paddles further down a river of impossibilities. Black Mother is a movie that’s so intelligent you feel like it’s watching you, seeing if you’re understanding everything it has to say. It goes so fast, how could you? It’s the gist that matters, the collective impression, in much the same way that faces captured in crisp 1080 digital tableaux have no less force than those caught in warped 16mm. He dips us into the boiling water of Jamaican history a little at a time and whatever moisture clings to us is enough to prepare us for the images and impressions that follow. Sam Sharpe, the murdered slave who could read, who was in danger of telling the others that Britain had ruled that they had to be paid, gets a quick biographical passage, courtesy of a man standing near his statue in a public square. Allah films young Jamaicans holding black history books like Black Christ by Kelly Brown Douglas and They Came Before Columbus by Ivan Van Sertima while a disembodied voice discusses the way black people have been written out of curriculum and narratives the world over. The sight of people gazing intently into Allah’s lens in a hundred different formats, black and white, colour, film, digital, still and moving, all defiant before erasure, is stunning. Transformative. The people of Jamaica, we intuit, stood before a culture that had enslaved them and had to shape like smiths with a hammer to get it to exalt and celebrate them. Black Mother presents lessons, part history, part anthropology, every few seconds, and you can make of them what you will, because they don’t all agree with one another. Allah’s images and sounds converse with the idea of religion, religious history, and the way the present reacts to them in two different registers. The dissonance and harmony in which his photography and soundtrack live allow us to learn, to embrace or reject, ideologically, but Allah has made the fact of his subjects immutable. Your participation isn’t necessary, really, the film speaks for itself and to itself. It is so powerful and loud that silence before the film is sometimes the only imaginable response. What can we meaningfully hope to add to the image of a toddler sized growth on the back of a man’s neck, or the man with one leg scared by police lights as he crosses the street with a guitar on his back? Jamaica has churches and is awash with people who could use some of Jesus’ love and empathy. Black Mother‘s parade of the forgotten, bleeding from sores and disfigured by malady in concert with the more wealthy residents on the island makes the film a cinematic answer to Picasso’s Guernica and Goya’s El Tres de mayo 1808 en Madrid and his earlier Los desastres de la guerra prints. They’re overflowing canvases rent with pain, the kind of uncanny, indefinable emotional register associate with the impending death of the vanquished, a multifaceted survey of the work of bullets. The strange twisted expressions among the men about to be shot in historical paintings, something like a desperate insane release of endorphins bargaining with abject terror can be found all over Black Mother, too. The bullets of history have all been fired, the work has been done and now the piles of bodies from those paintings are still-living casualties breathing in the fumes of colonial power and pain. Allah went out and found them. He’s unafraid. Black Mother may be the most fearless film I’ve seen in a decade.

There are skin textures and tones you won’t see anywhere else but in this work. Hands that look carved from old growth trees, matted hair as long as a leg, women kept human despite sexualized context. The unsexed synecdoche of the title is a totem of womanhood made into product by men. She stands stark naked near a man with a knife splitting a coconut and watching its white blood spill all over the floor. It has the kinetic energy of a Jean Rouch study, but Allah is not a passive observer taking his findings back to ‘civilization’. His family comes from here, they live and die (as we see during the funeral in the final passage of the film) on this island. This is his home as much as the New York of his early work. The world is his, because he gives it to the people he captures with his camera. Black thought and manpower built the world and he wants to give it back by placing black faces of every shape in his frame, staring at every viewer. Get used to this. The era of white supremacy is nearing its centuries-overdue end. Unfortunately, white men may take the planet with them when they go.

The fascinating thing about Allah removing his voice from the context of his own images is that he destabilizes himself, throws himself into a kind of ethereal drift, which is fitting because the more you hear him talk about his beliefs the more you see they have no recognizable framework. He isn’t a Christian, and he isn’t of any of the religions on the island, he’s outside of them, as if his soul had died and were now floating, looking for a home, alienated from the structures waiting to receive him, but content knowing his place: standing with a camera in his hand in front of everybody else. There’s something of Rossellini about him, the way he surveys the work of men through their art and aggression, where their limitations lie. His form may look like Malick, but Malick has conventional religious beliefs, and that means his films come out more conventional in structure and grammar. The classical music betrays him, as do the frequent trips to churches and the conversations with God. Allah’s subjects and Allah himself talk about God, who is noticeably absent from the proceedings. Allah’s making the film for us, which makes us god, and he’s one of the few who take that approach and you can tell right away this is not ordinary filmmaking. Those breath-taking slow-motion pans, the talk of the unnatural order of the world punctuated by the sight of a lake literally burning, even the drone shots, which he alone makes interesting, that is all for the invisible judgment of the viewer. “What do you make of all this?” is what the film implicitly asks us. It will answer every question it poses explicitly. The rest of the work is for us. It talks to itself, to the world, to the past and the future, it only asks us to listen and wonder.

“Grandpa… what do you think about death?” Allah’s voice is a haunting volcanic eruption across the film, spewing fragmentary ideas and prompts across the void, the darkness of the soundtrack. The crystalline visions of spiritual crisis, the superhuman intelligence of the edit, the treatment of time and death, this man, with this voice, he’s responsible for it all. The series of cuts that take us from Allah’s grandfather in bed, his voice echoing from nowhere as he describes living eternally with God, to old home movie footage of him, years younger on the porch, to him in his coffin while a priest recollects his existence, is the most productive reckoning with the idea and the finality of death I think I’ve ever seen. The swiftness is actual, you are here and then you’re not, but the rhythmic continuity is also true, but only to us, the god in the audience who sees it happen. People go and we live with the idea of them. They’re now in the montage of memories, which Black Mother approximates. He builds us not just a Jamaica of streets and faces but a museum (like Rossellini’s Beaubourg) of memory and sensation. The sum total of experience in this picture or that, should we choose to reflect on them. Black Mother is built to pause and linger over, but to do so would be unthinkable because no film so begs to keep going. It is a gigantic step towards a reckoning with the black history of the world. As we watch it, it watches us right back only it doesn’t blink.