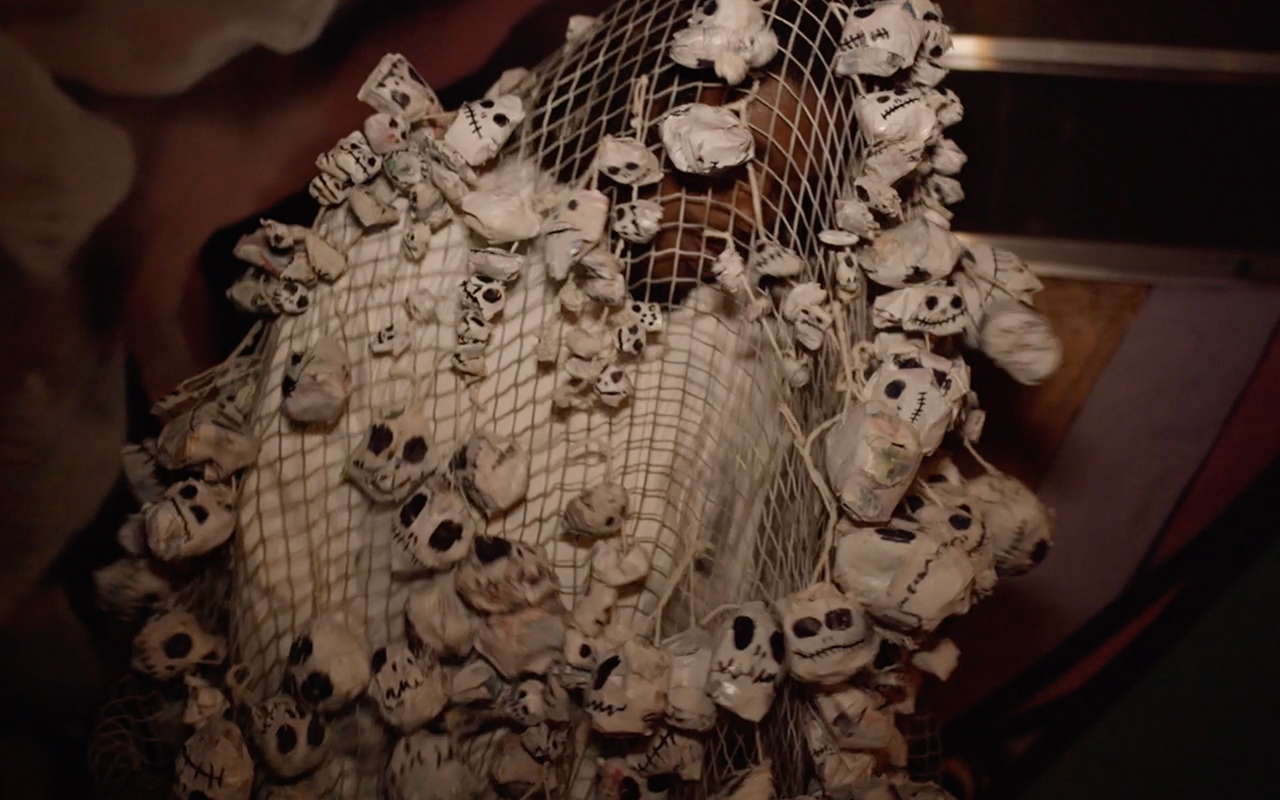 A friend asked if they were to travel to any film festival in the world next year what would I recommend. Sundance? TIFF? Cannes? They must surely have their merits but I’ve never been. Despite my blindspots, and there are literally thousands, I still confidently gave the only answer I could: BlackStar. BlackStar is a humble Philadelphia festival and now an almost decade long staple every August over by the Drexel Campus. It splits its events between some galleries and the International House, which is due to be sold, sparking some concern about the future of the festival. It was always important for there to be a festival that only accepts work by black, Latinx and indigenous filmmakers, but lately BlackStar’s existence is imperative. Hollywood crawls toward parity, everyone drags their feet and complains about wokeness being too much and white men being put out of jobs for their hitherto unpunished thoughtlessness. The lie of art for black audiences not being a sure thing to bankroll is eroding, but we’re not there yet. These films need to be fostered and given a home where their intended audience can see them and prove they love them before escaping into the wider cultural waters. In short: if anyone was ever worried about whether a movie ‘works,’ show it at BlackStar. You’ll find out.

There was a…let’s say fun crash course in the BlackStar audience approval rating when Spike Lee came to town for a chat with Tarana Burke, the reason the words “Me Too” have new meaning in 2019. She lobbed softball questions at him for the first little while, talking about how important Do The Right Thing (1989) continues to be and allowing Lee to air his grievances with the critics who responded to it with racist attacks, but then things took a turn. She asked Lee about the way he portrays black women, and his response got the crowd off their feet as he dodged, hemmed and hawed, and finally attacked Burke for daring to ask the question in the first place. By the time he knew the room was against him and he pleaded for a second chance, it was over. The room had turned on him as thoroughly as I’d seen this audience erupt with unhinged applause and emotion after Terrence Nance’s They Charge For The Sun in 2017. This is a vocal audience and there’s genuinely no better group with whom to watch movies. The documentary Mr. Soul! (2018) went from great to an all-timer when the crowd started singing and dancing and giving the raised fist salute to the archival footage. This year the line-up of features was maybe the weakest I’d ever seen and still, it felt like the most vital movie going experience of the year.

Let me qualify that last comment by saying that despite a weak showing of the over 60-minute set, there were some shorts I’ll never forget. The short form work selected for screening at BlackStar is always the highlight; this is where I discovered Naima Ramos-Chapman, who I’d call one of the great American directors right now on the strength of just her two short films. She was back this year with her video for Earl Sweatshirt’s Nowhere, Nobody, co-directed by Nance, with whom she also writes and directs Random Acts of Flyness for HBO. The video is vibrant and arresting and follows her rhythmic whims to exciting places. BlackStar is where I discovered Raafi Rivero, director of the incredible 72 Hours: A Brooklyn Love Story (2016), back with his short Re/Connections (2019), a beautifully moving short made in collaboration with a Chinese camera company. (Confession time: I helped out on set a few days but no amount of bias could blunt the obvious greatness of Rivero’s images. I went to set to help him because he’s an obviously great artist I wanted to help make his next work so I could watch it sooner). It’s where I discovered Iyabo Kwayana, whose new film Practice is one of the best avant-garde films of the year. It shows a school of Chinese children practising for a gymnastic exercise and her every composition and edit thrusts power into the impossible geometry of connection and collaboration. A major director stretching her wings and creating a gust of wind so powerful you nearly fall out of your chair. I went to BlackStar because I was asked to cover it, because I come from Philadelphia. I come back to BlackStar because it’s the best place on earth to see the best films of the year.

Practice is the kind of thing, 4 or 5 minutes long if memory serves, that you’re grateful for as a film critic. It transpires in less time than it would take you to drink a cup of coffee and still I can see its images, hear its sounds, practically feel the breath of its characters on my face. Lacklustre efforts like Selah and the Spades (2019) don’t linger except in their poses. A character goes to Fishtown, where I had just eaten lunch, and comes back bruised and beaten. Too much of Philadelphia has gentrified to pull that. You have to go farther north for that to ring true. Stanley Nelson’s Boss flatters its billionaire subjects too frequently but Nelson is such an assured storyteller it’s just a pleasure to watch him work. His movie was the perfect thing to watch during its Sunday morning timeslot. Like reading the morning paper. The best features were the ones that feinted toward the durational or the formally off-kilter. Tania Hernández Velasco’s Titixe was the first time I’d ever seen anything approach slow cinema at BlackStar. It’s a chronicle of a Mexican family slowly learning that they’ll have to say goodbye to the farmland they’ve worked for generations. Velasco avoids the easy emotional buttons and switches, and lets their faces, hands and the land speak for themselves. Rodney Evans’ Vision Portrait is the kind of thing I hope to see every year: it’s strong enough to get away with playing to the audience.

Evans learned he was going blind after beginning his career as a filmmaker and so started interviewing other blind creatives to see how they dealt with the problem. He talks to a photographer, a dancer and an author and of course interviews himself and comes away with wrenching testimonies. Evans makes us see what he sees, and hear what he feels as we cannot know ourselves how it is to lose what gave us the world in the first place. It’s a continuously daring work of empathy, and refuses the urge to ask for pity. The best work here eschews easy answers and easy applause. The best work here is a whoosh of sensation and feelings never before captured by the dominant world cinema. A.V. Rockwell’s Feathers goes deep into abandonment, childhood and surrogate fatherhood, Rikkí Wright’s A Ritual of Sisterhood thrills in its intimacy, Curtis Essel’s Agya is a blood-shaking aesthetic triumph, showing tones and rich skin colours practically alien to American cinema goers. The work is good and then it’s important.

The best shorts I saw here felt like the best films of the year period. Kevin Jerome Everson & Claudrena N. Harold’s Hampton ‘about’ a choir practice drags up all of the feeling in your being with its simple and, unusually for Everson’s recent work, carefully and resplendently lit tableaux of practice, work, and collaboration. Everson and Harold show the walk to the space and the performance itself, direct to camera, making a live audience of us as well as a cinematic one. Everson has a Fred Wiseman-esque dedication to an augmented working class black reality that occasionally gives way to fantasy or magical realism, but this is something else: a full on celebration. Keisha Rae Witherspoon’s T is the flip side of the coin. It too centres on a kind of performance but it’s a kind of costume-laden funeral. Witherspoon describes the film as being indebted to Afro-futurism, but it’s also got too firm sense of the sensational now to simply be put in those terms. The sight of a grieving mother smoking a cigarette and talking about the women who lusted after her dead son is right out of a Southern gothic. The boy on the bicycle who tells a joke with “no punchline, bitch” (the biggest laugh at the festival) seems to have floated in from someone’s home movies. This is a bountiful tapestry of lost souls looking for a canvas to paint themselves on. Witherspoon created things I’ve never seen before, in a language I wasn’t aware anyone spoke. Nowhere but BlackStar shares with me this way. I go to watch and listen and I’m never disappointed.

This Outdoors article was published in October 2019