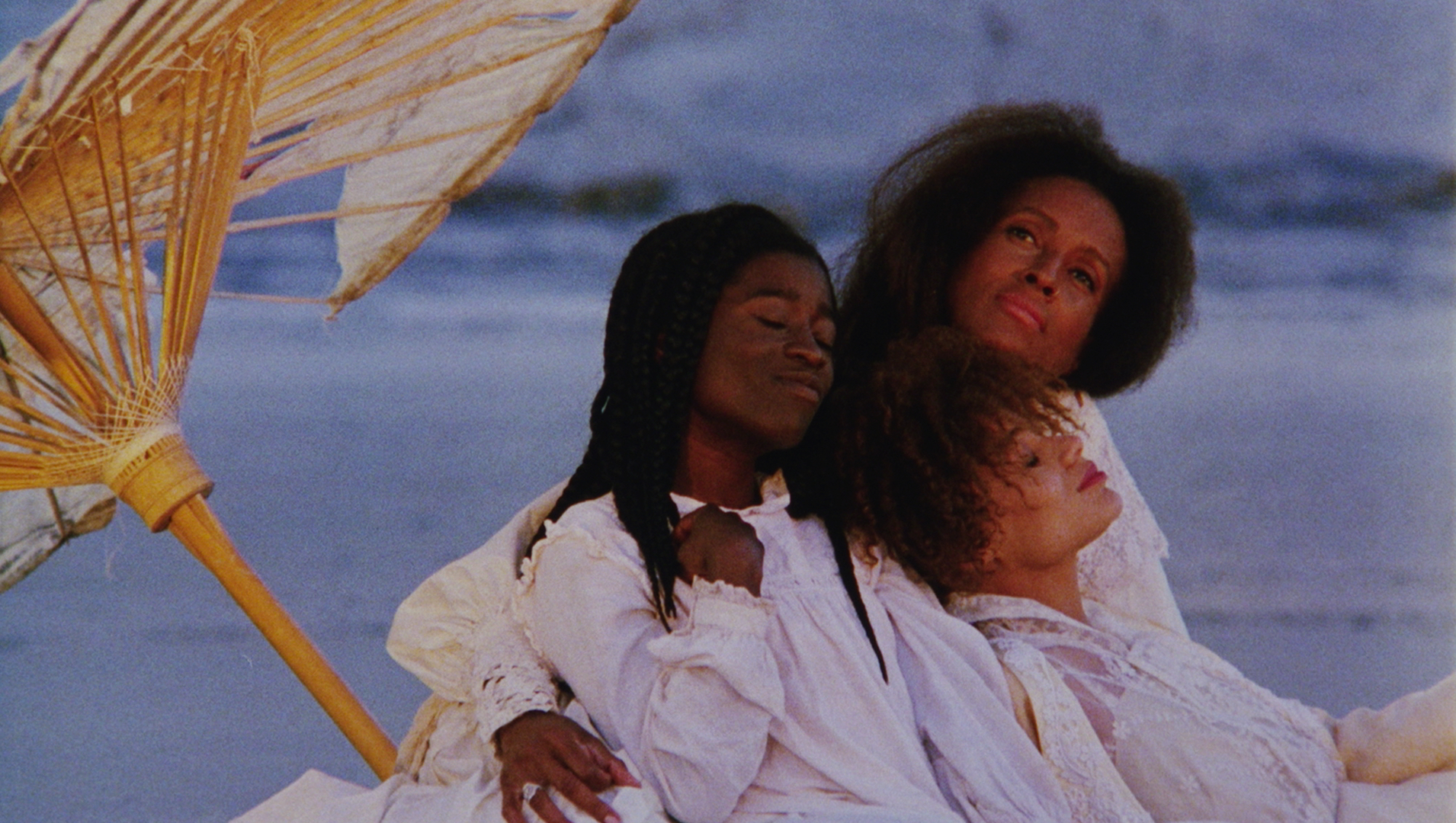 When it was announced that Ava Duvernay’s A Wrinkle in Time (2018) would not be released in The Netherlands and Belgium, something felt off. One could think Disney’s reasoning was purely commercial, but the non-release fits in with a long tradition of Dutch distributors being reluctant at times to release American cinema by or about black people, and in a long tradition of black women being marginalized in the western world. So in response, we decided to celebrate black female filmmakers, highlight those too often neglected voices, and show just how vital and important they are and have been. From the earliest pioneers to the newest talents.

Integration Report One & I Am Somebody (Madeline Anderson, 1960-69) Anderson is regarded as the first black female documentary maker, although she herself claims Hortence Bevarage was the first and she was the second. Anderson used to go to the cinema a lot but regretted that she could never identify with the persons on the screen. This was the reason why she started making films.

From the very beginning, Anderson wanted to make films that taught people something, about underexposed black history in particular. In 1960, she made Integration Report One, a black-and-white short film that documented racial struggles of and the violence against the black community. The film features important future figures in the Civil Rights Movement, like Martin Luther King.

In 1969, Anderson made I Am Somebody, a short documentary about the strike in Charleston of 400 black women who worked at the Medical College Hospital. With this film, Anderson showed how these women, who have the most important role in family life, have to fight for equal salaries, justice, and respect.

Anderson’s films are accompanied by the same song: We Shall Overcome, sung by poet and author Maya Angelou. This gospel song became a protest song and an anthem of the Civil Rights Movement. But have they overcome? Has anything changed regarding the emancipation of black people? “No, it hasn’t” according to Anderson. “We’re still fighting for the same things. We’re further than we were, but a lot of work still has to be done.” When Kathleen Collins wrote, produced and directed Losing Ground, it was supposedly the first (or at least one of the first) feature fiction films directed by a black American woman, making it a seminal film in American film history. However, it has only been recently recognized as such through recent re-releases. Initially, it never got a release beyond the festival circuit. Collins died in 1988, thus her recognition as the creator of a major chapter in American film history sadly only came posthumously.

Losing Ground is rich in mood, atmosphere, and subtext. Seret Scott stars as philosophy professor Sara Rogers, teaching courses on logic. Her husband, however, appears more interested in the model for one of his paintings. Fed up with his flirting, Sara leaves him for a few days to act in a short film by one of her students, which is about a man cheating on his wife until she no longer puts up with it, expressed almost entirely in several lovely dance sequences.

This film within the film masterfully connects to and comments on the main story, and with its dances provides a rhythmic counter to the many intellectual discussions on art and philosophy in Sara’s real life. Both combine into a whole that can be felt instinctively while also giving food for thought. In an age when the stereotypical portrayal of black people was commonplace in American cinema (even more so than today), Losing Ground was a refreshingly humanistic, complex portrayal that deserved so much more than it got. Daughters of the Dust

Watching Daughters of the Dust is like reading a Toni Morrison novel; it stands in the present and goes back centuries without even taking a single step, it draws out lineages, most importantly, feminist lineages, and creates a body of history of people who have been systematically written out of it. Julie Dash’s narrative of a Gullah family, the Peazants, moving to the North during the Great Migration from the Southern Saint Helena Island is a magical realist narrative that has the past, present and future in a constant conversation.

There is Nana Peazant who stands for the centuries-old values and knowledge systems that have been handed down in legends and myths from generation to another; she is the embodiment of a past wisdom that gives us the strength to live our presents. Then there are Haagar Peazant, Viola Peazant and Yellow Mary who, through different systems of faith and practise, try to contextualise the past within their own presents. Then there is the promise of a future, Eli and Eula’s unborn child who comes with the hope of uniting the past and present and braiding the two together into a tapestry that draws out the community’s hopes and soothes out its anxieties.

Julie Dash’s vision is radical as she blurs the line between fiction and documentary, past and present, and the magical and the real. The film is both the story of one community and every marginalised community. It is literally like an art manifesto of making sensitive artwork that represents all voices from the margins and brings to the centre a manual on how to concentrate efforts on moving forward, but in an inclusive way. Just Another Girl on the I.R.T

Chantel Mitchell (Ariyan A. Johnson) plays a 17-year-old high school student living in Brooklyn. She’s smart at school and sassy on the street; she wants it all. This should be the kind of story Hollywood loves. A teenager from a poor family overcomes adversity and makes it in the big city. So why did it end up being in 1992 – as Leslie Harris, who wrote, produced and directed the film, clarifies – “The film Hollywood didn’t dare to make”?

For a start, Mitchell is African-American and she’s proud of it. In Whole Foods, where she works, she makes fun of a spoilt white woman who is complaining stuffily about the store’s missing Brie with caraway seeds. Later she mentions that the woman’s checkout bill is nearly the same amount as what her own parents earn in a month. Because she uses expired birth control, our protagonist falls pregnant about halfway through the film. We know Hollywood doesn’t like sad stories, but what it craves more than anything is a decision. As an audience, we’ve come to expect that too, and life is thus presented as a series of decisions to be made. Not only is this cathartic for our capitalist sensibilities, it puts women firmly in their places. If this film were Hollywood, when Chantel falls pregnant she would make a decision about what to do with the baby – to keep it or to abort. Yes, it’s her choice, but a decision must be made. But Just Another Girl defies this convention by putting off the decision… it thus leaves the viewers frustrated with a desire for decision gratification. As so often in real life, the decision is made for her. Cheryl Dunye’s 1996 debut film The Watermelon Woman, about an aspiring filmmaker who works in a video store while researching for a documentary about a mysterious bit player in 1930s Hollywood films while romancing a beautiful white woman, is simultaneously of its mid 90s moment (in fashion, language, locations) and way ahead of its time, in both its meta-filmic project and its depictions of the complicated and refreshingly unresolved tangles of race and sexuality both personal and in our depictions of cultural history. There’s real nuance in the relationship between Dunye and Guinevere Turner, and its paralleling of the historical relationship between the eponymous actress and her white lover is very deftly done. A very smart, funny film, with a bunch of cameos from real people. The appearances by David Rackoff and especially Sarah Schulman are hilarious. Reputed to be the first African-American lesbian to direct a feature film, Dunye’s only completed a handful of projects in the past 20 years, most recently some episodes of television. Mati Diop’s short film, Snow Canon, is the story of two spaces. A young girl sits awkwardly beside a boy, her body language an imitation of flirting. This is the first space: the space of the physical, of messy, girly bedrooms and bodies apprehensive and untrained. Diop cuts abruptly to the second space. We see only black text on white screen and the digital glow of a laptop display as the girl types to her friend – “things r getting hot with Simon.”

The abruptness of Diop’s cutting produces a contrast between these spaces that is immediately and effectively felt. There is the flatness of the digital and the fullness of the girl’s physical surroundings. Within the digital, her friend tells her stories of her holiday in Mexico, but we are not given access beyond the wall of the white screen. Within our protagonist’s space, another figure enters. A young woman who has been employed to babysit. Our protagonist watches her carefully. Indifference turns to understanding, and understanding turns to desire.

Contrasted by the restrictions of the digital screen, the space that the two girls inhabit becomes one of heightened texture and perceptible tension. Diop takes texture to its logical limit, presenting a fantasy image of the babysitter naked and adorned in exotic textiles of chiffon, silk and gold. Such material focus transposes desire onto fabric, making it tangible. The girls kiss goodbye, but their farewell’s sense of finality is undercut by a brief closing sequence of the girls dancing together. It is not clear where this sequence takes place. Another fantasy space? Or perhaps directly within the contrast between flat and full, digital and corporeal, the desire to be somewhere else and desire realised here. Either way, it’s an image of the physical, of the touchable, suffused with the physicality of two bodies moving in tandem.

And Nothing Happened (Naima Ramos-Chapman, 2016)

Naima Ramos-Chapman is in the middle of making a film called Absent Matter. Not to overhype it, but it looks like it might be the best film of whatever year in which it will eventually be released. I say this with the confidence born of having seen NRC’s first short solo outing as director, on top of all her co-directing work, and her many starring roles in short films by the great Terence Nance. Nance, one of the most important short film directors in the country, saw something profound in Ramos. Her power, her staggering confidence as a screen presence and person, her fearsome intelligence and omnivorous cultural interests.

Nance took part in the creation of And Nothing Happened, but the film is so toweringly singular, so obviously the work of a director with something to say. It’s about sexual violence and presents its scars in the abstract, as negative presences, as the encounters that will now be marred by it. Ramos’ tired and distant expression, her eyes staring into infinity, her distracted conversations with her family. Her face and voice, her gaze, speak to the real time and inescapable toll of assault, of the wreckage men leave behind in the course of living their unchecked lives. The film stares at us like a mirror, and then plunges its head into the glass, shattering the safety of reflection.