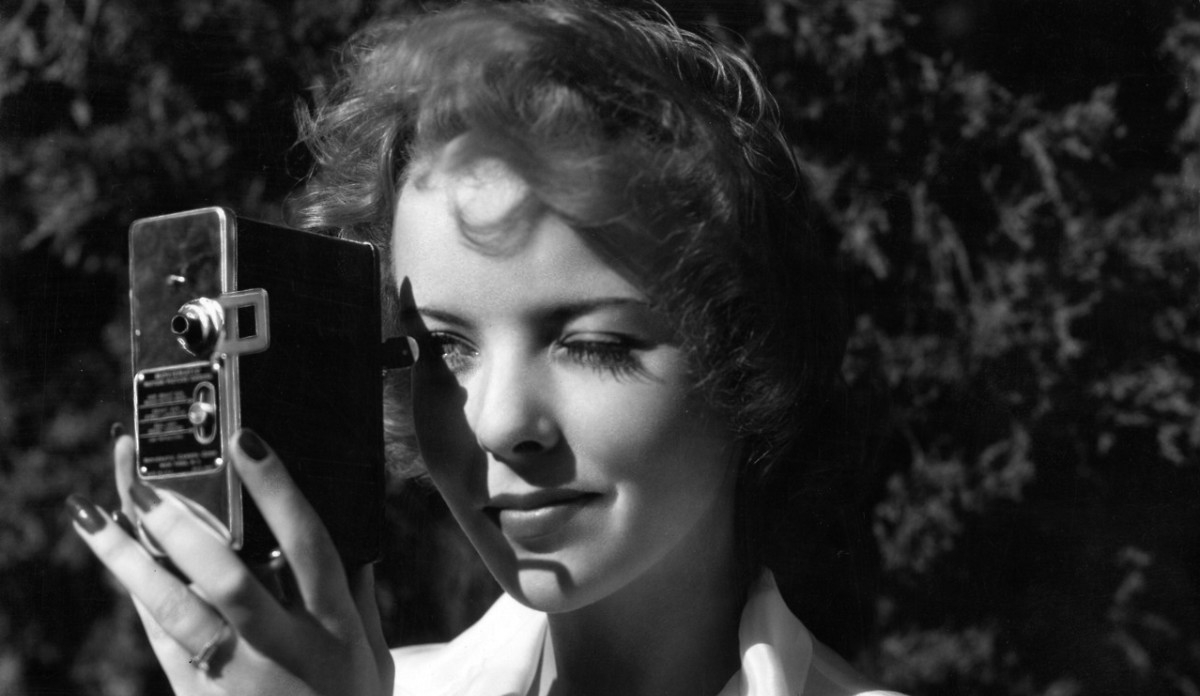 Ida Lupino (1918–1995) had always wanted to write and direct, but became an actress first to please her father. Afterwards it was hard to make the transition from actress to director in the male dominated Hollywood of the 1940s, but when she got her chance she took it. Still, she only got to direct 7 feature films, most of them low-budget movies financed through her own production company. Lupino remained an actress to fund these films.To celebrate her 100th birthday this month, Frameland shines a light on all her features. Tragedy looms large in both the plot of Not Wanted – the first film Ida Lupino wrote, produced and directed – and the story of the production surrounding it. The 1949 feature was originally to be directed by Elmer Clifton, a veteran of silent cinema. Clifton began making the film but suffered a heart attack three days into shooting. Lupino took over directing duties, though declined to take a screen credit despite shooting the majority of the movie, retaining only co-writer and co-producer credits. Clifton would later pass away during the time of the film’s release.

Lupino’s later directorial efforts would demonstrate a penchant for emotional truths and nuances behind taboo subjects, and this is a trait on display in her first unofficial film as a helmer. While bigamy and rape in the other films maintain controversy today, Not Wanted concerns the story of an unwed mother, something that’s not exactly a social taboo in most parts of the world now.

Lupino’s exploration of the plight of a young woman is no less engaging for this, and is riveting in its portrayal of the growing cynicism developed by lead Sally Kelton (Sally Forrest). Let down by sources of ostensible compassion, and cursed by the hypocrisy of various authorities, her actions in the film’s flashback-preceding opening – where she briefly kidnaps a child in the street that resembles the one she has to give up – end up making a lot of sense. Also of note, stylistically, is a hallucinatory birthing sequence that feels like a possible influence on Rosemary’s Baby (1968). “Tell me I’m a woman!” The subject is female impotence, already revolutionary and daring, shot in a real hospital wing. Dancer Keefe Brasselle enters his rehearsal space and over his corner in the middle distance is partner Sally Forrest like a music box figurine, spinning in place. His whole world over his shoulder. Forrest’s dancing, when we get a look at it up close is jagged and muscular; a proto Nomi Malone. She and Brasselle (the couple returning from Lupino’s debut Not Wanted) bicker convincingly and make-up just as well. Their first dance involves a staged sword fight, rightly distilling the XX-XY dynamic of Lupino’s work on and behind the camera into a Freudian cabaret act.

It’s all fun and games until it isn’t. The sword has to go somewhere. A seppuku sword will later symbolize a different woman’s self-imposed celibacy and ruin. Forrest has contracted Polio and her career will collapse before it’s begun. The electric energy of young love makes even her reverse-shot conversation coverage (which is more triangular, anyway) burst with purpose. These kids are like Nicholas Ray’s Barkleys of Broadway, hope ready to be dashed. Lupino knew the world was harder on women, so she worked twice as hard on their behalf. The film introduces a new and inventive delight practically every few seconds: a dazzling distortion effect that makes a piano sound like the harmonium on Nico’s The Marble Index, staggering dawnlit dolly shots and a wheelchair square dance. Ann Walton  is a happily engaged young bookkeeper. One day, she’s followed after leaving the office. Ann tries to run away from the stalker, but is eventually caught and raped by him.

Lupino was one of the first directors who addressed the topic of sexual assault in a non-sensational way. The censorship hindered her to present the act of the rape explicitly. Moreover, the characters refer vaguely to it as an “assault” or “attack”. However, they do express their anger about the fact that rape is a big problem in America’s society and the police and government is doing very little to solve it.

Outrage is considered a progressive film, but the representation of Ann remains stereotypical. Ann is a mentally and physically weak woman who can’t defend or help herself. By modern standards of female representation, Lupino’s film seems far from progressive.

The film dives into Ann’s traumatized psychologic state several times. Just like in Ann’s experience, we hear the thumping of footsteps getting louder or voices getting softer. When a man invites her for a dance, Ann starts to panic. The viewer relives the rape together with Ann, by seeing the scar she imagines on the neck of the man. Would a male director film this scene from such a female perspective in the 1950s, like Lupino did? Probably not. Out of shame and fear, Ann ran away from home. Perhaps not the best way of dealing with her trauma. In the end she has to face her trauma and “start life all over again”. The young Florence (Sally Forrest) is discovered as a tennis prodigy. Her overbearing mother sets her up with tours and coaches, while living vicariously through Florence’s successes. A simple plot about selfishness, written with the rigidity matching Lupino’s sparse and barebones direction. At 78 minutes, it races through the rise and fall of Florence, but it never feels rushed. It rather feels deliberately rough and minimalist.

The era’s melodrama doesn’t undercut the refreshing story beats. In Lupino’s world, Florence wouldn’t roll over and tragically (read: beautifully unreal) succumb to the aggressive coachings. She should eventually have to bite back and take control. The mother, in all her moral ugliness, is tragic rather than simply evil. At the heart of this b-level melodrama, there’s a nice kind of subtlety.

The high points of the film come in the form of these prolonged and almost silent tennis matches. Lupino relies solely on a multitude of repeated angles to build the idea of a match, cutting back and forth between opponents and audience. There’s a light (but very rough) touch of Russian silent-era geniality in the editing. She’s not quite there in terms of craft, but where she tries (and thank God she does try), she succeeds well enough. “When was the last time you invited death into your car?” So goes the tagline for Ida Lupino’s first “action” film noir. Death slips into the car in the form of murderous hitchhiker Emmett Myers, whose slightly wonky eye would have confirmed his status as madman and con-artist to American audiences of the 1950s. The two friends in the front of the car who had set out on a companionable fishing trip are thus captured by a shadow which morphs the friendly daylight into menacing night. Pursued by the police, Myers uses his two new victims to try and escape the area. His eye will create suspense later on in the film because it never closes… while his two victims are sleeping on the ground during the long night of their kidnapping, the question of whether Myers is awake or not creates thrilling uncertainty. Though the characters are rather black and white – just as the two buddies support one another with brotherly Christian sentiments, the evil Myers mocks their religion in Don-Juanesque fashion – this quintessential film noir is especially memorable for its photography. The film was on an original idea by the American blacklisted scriptwritier Daniel Mainwaring, who was not credited for the film. Lupino’s The Bigamist is nowadays best known as the first film noir in which the female lead directed herself.  She plays a mistress who comes into the life of Edmond O’Brien, a succesful but bored businessman. The film starts with O’Brien and his wife wanting to adopt a child. The adoption agent is somewhat suspicious towards O’Brien’s behaviour. He starts to investigate his life and soon discovers that O’Brien is leading a double life and already has a child with another woman. This woman turns out to be Lupino, as O’Brien tells the agent in a flashback. When he finishes his story we learn that he is married to two women, one of them being Lupino who he had an affair with until she got pregnant and he decided to marry her eventhough he was already married. This film is not necessarily suspenseful but more an interesting take on the moral dilemma O’Brien faces being tangled between two women he loves. The final courtroom scene makes the viewer realize that O’Brien tried to do the right thing. Lupino directed a nuanced film where we can sympathize with everyone involved. It almost feels more like a Douglas Sirk sort of melodrama instead of a noir. The Trouble With Angels

After her production company The Filmmakers folded in 1955, Ida Lupino continued to act, write and direct, but mostly on the small screen. Her television credits include acting in and directing episodes of The Twilight Zone (in 195 and 1964 respectively) and directing episodes of Gilligan’s Island (from 1964 to 1966). Just after directing her last episode of that show, Lupino made her last feature film: The Trouble With Angels.

The Trouble With Angels follows the rebellious Mary (a young Hayley Mills) and Rachel during their years at an all-girls Catholic boarding school, run by nuns under the leadership of the Mother Superior (Rosalind Russell). Their story is told in a series of episodes in which they get up to mischief and into trouble (including a secret smoke break so smoky it draws the fire brigade!), dream about life and the future and start to respect the nuns and the Mother Superior that they initially mocked.

The Trouble With Angels is solely concerned with female experiences, perhaps more so than any other of Lupino’s films. Men only feature briefly, and then only to have their perceived authority upended by stronger, smarter women. Although the farcical jokes are sometimes very old-fashioned, to put it gently, overall The Trouble With Angels is an endearing buddy comedy about female friendship and the generation gap of the 1960s, in which modern ideas clash with those of the Catholic Church. Yet the devotion and kindness of the nuns also ends up inspiring the young girls.