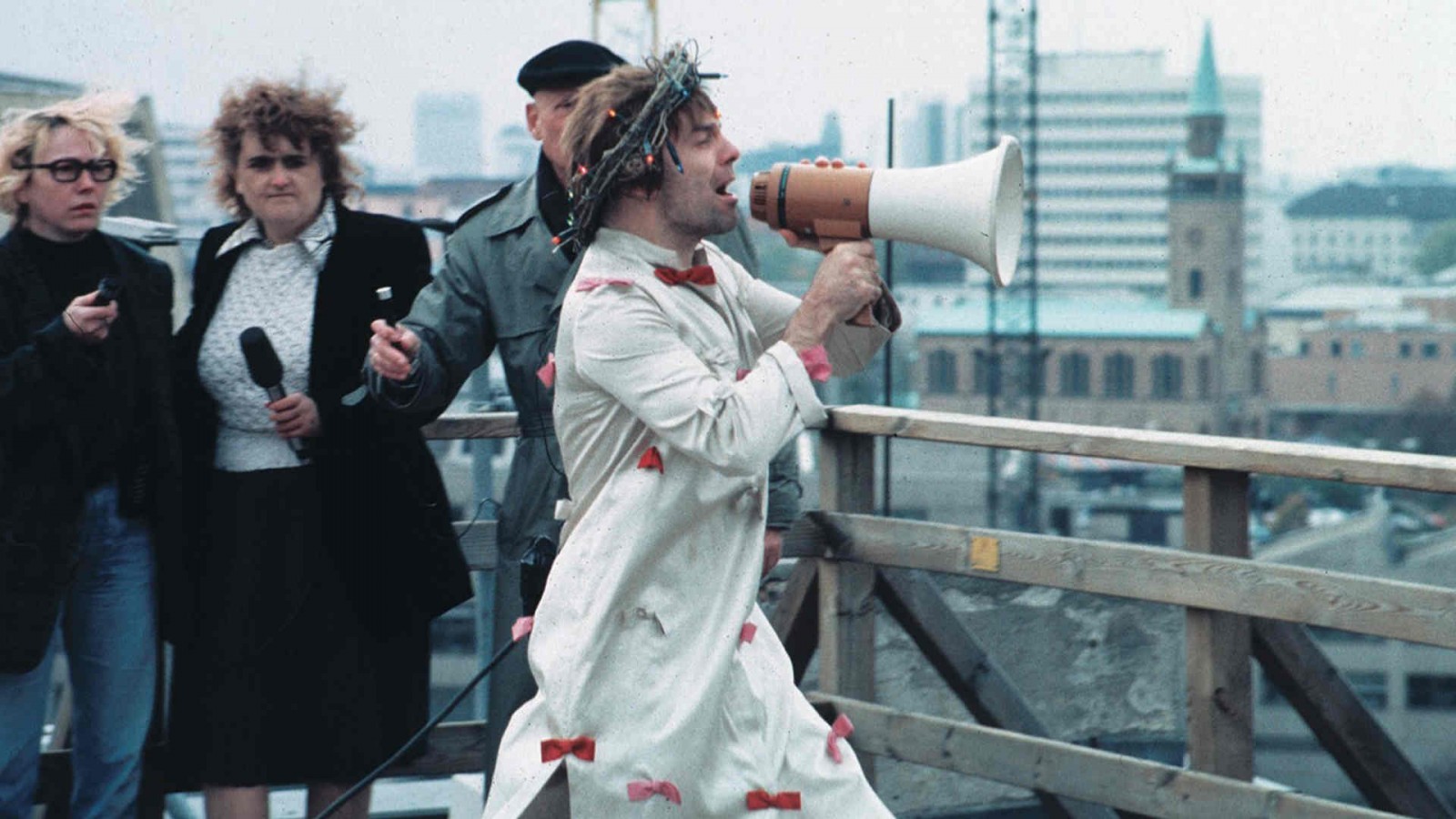 So schön wie hier kanns im Himmel gar nicht sein (loosely translated: ‘It can’t be as beautiful in heaven as it is here’). It was with this title that the diary was published that film- and stage director Christoph Schlingensief kept from the moment he was diagnosed with lung cancer. In 2011, a year after his death at the age of 49, the Holland Festival organised a modest retrospective. Not knowing anything about his work, I (unfortunately) went to see only one performance, the very last one he made: Via Intolleranza II (2010), about the opera village he set up in Burkina Faso. To this day, it is one of my most precious theatre-going experiences.

After that performance, I began to delve into his work, going further and further back in time as a kind of archaeologist, ending at the roots of Schlingensief’s artistry: film. Last year, the streaming platform, MUBI, presented four of his films under the title ‘Germany Dissected: a Focus on Christoph Schlingensief’. Dissecting is exactly what this enfant terrible of the German art world did in his work and you can’t dissect without breaking things. Without cutting, uprooting and disrupting. His films ‘poke about in German wounds,’ as this review of an exhibition posthumously devoted to Schlingensief puts it into words, ‘always slightly unpleasant in their exorcist zeal and Oedipal obsession, at the same time being ridiculously overdone, dripping in fake blood. The perfect synthesis, then, of a B-movie aesthetic and German author cinema.’

Schlingensief’s second feature film, Menu total (1986), about a boy disguised as Hitler taking revenge on his repulsive family, is a good example of this statement. Schlingensief himself called it a ‘cynical comedy’, but upon the release it turned out that most people couldn’t see the humour in it and the film flunked mercilessly. Menu total contains many elements that would recur in Schlingensief’s work: the churning of Germany’s past, the chaotic style of filming attacking all the senses, the political incorrectness, the transgressive humour that functions as a kind of perverse translation of the banality of evil. As stated in an article on MUBI: ‘There is no narrative rest, no cohesive story, no catharsis or salvation in his films. Instead there is the violence of the image in both content and the tenacity of its form.’

Schlingensief considered himself an adept of the Neuer Deutscher Film, a movement that reached its peak in the 1970s with filmmakers such as Werner Herzog, Margaretha von Trotta and Volker Schlöndorff. But the pivot of this movement was Rainer Werner Fassbinder, who died in 1982, and that’s where most of his kinship lies. Schlingensief, like Fassbinder, was a prolific filmmaker and both directors were disruptive and therefore controversial. And just like Fassbinder, Schlingensief loved melodrama. He called Douglas Sirk’s Imitation of Life (1959) one of his favourite films and explored the genre in his own way with Egomania (1986) and Mother’s Mask (1988). Many of the actors Schlingensief worked with came from Fassbinder’s stable: Alfred Edel, Margit Carstensen, Volker Spengler. Other regulars  in his films were Dietrich Kuhlbrodt, Brigitte Kausch and Udo Kier.

With The 120 Days of Bottrop, Schlingensief made a farewell greeting to Fassbinder and the Neuer Deutscher Film in 1997. In the film, the ‘survivors of Fassbinder’ come together to make a remake of Pasolini’s Salò, or the 120 days of Sodom (1975) at a construction site on Potsdamer Platz. Schlingensief saw that radicality had disappeared from German cinema and many leading actors had left the country. As listed in 120 Days: Udo Kier to Andy Warhol in New York, Helmut Berger to Luchino Visconti in Rome, Romy Schneider to Andrzej Żuławski in Paris. In the film, a Schlingensief-like character is played by Martin Wuttke wandering through the film like a lost Jesus-figure with stigmata and a crown of thorns. Afraid that he will no longer be heard and afraid to die early, just like Fassbinder. Schlingensief mocks himself, but is also serious. In the documentary Christoph Schlingensief and his Films (2005), he states that as a filmmaker you don’t always have to be on the right side of history, that you have be willing to immerse yourself in evil. According to him, filmmakers were far too often afraid to do so. ‘Everyone embraces each other.’

Schlingensief’s most famous film work is his German trilogy, a reckoning with the idea that Germany recovered admirably after the Second World War. What Schlingensief sees is a country that never really wanted to look into the pitch-black core of what happened. The first film from the trilogy is 100 Years of Adolf Hitler (1989), about Hitler’s last hours in his Berlin bunker, which degenerate into an orgy of lust for power and sex. Filmed in black and white in the narrow corridors of a real bunker and with a flashlight as the only source of light, the film visually echoes the silent movies from the era of German Expressionism. ‘We haven’t digested Hitler yet,’ says Schlingensief in the aforementioned documentary and according to him, history has to be chewed on until it is left completely harmless.

100 Years of Adolf Hitler opens with images of Wim Wenders receiving the Golden Palm for Wings of Desire (1987) and arguing that films can change the world. In his films (and also in interviews) Schlingensief regularly called out to Wenders (who once walked away from a screening of Menu total within ten minutes, by the way). For Schlingensief, Wenders is a symbol of the Germany that plants beautiful flowers to cover the dirty soil. Schlingensief’s answer is to tear those flowers away and push your face in the mud. You have to acknowledge that the soil is still the same soil and that it doesn’t take much for the weeds to sprout from it once again.

The next two parts of the trilogy elaborate on that idea. In the month following the fall of the Berlin wall, Schlingensief made The German Chainsaw Massacre (1990). While newly united Germany and the world were mainly celebrating, Schlingensief painted a picture in which West Germans turn the East Germans into mincemeat. Literally. ‘They came as friends and left as Frankfurters.’ Schlingensief did not see the euphoria of reunification, but the unbridgeable inequality. And that inequality fed an aversion and distrust that, according to him, would continue to fester for a long time to come. For that is what lies hidden underneath the aggression and hatred that we so often encounter in his films. ‘I love to peel off the layers’, as Schlingensief himself put it in Christoph Schlingensief and his Films. ‘And what you find underneath is always fear.’

The last film in the trilogy is Terror 2000 (1992), very loosely inspired by the hostage drama in Gladbeck in 1988, which resulted in a media spectacle in which one of the two hostage-takers spoke to the press extensively and put the barrel of a gun in his mouth, an image that Schlingensief echoes in his film. In Terror 2000 we see even more clearly what ignoring those smouldering remains of Hitler can cause to ignite. ‘The Neo-nazis are coming!’ Here too, the violence is grotesque and absurd, but it is more difficult to laugh off. The audacity of the neo-Nazis shown in the film, who link the resurgence of Germany to keeping the white race pure, echoes very loudly in the present. Schlingensief’s work is not a refined and flawless social analysis, but it does indeed stir up something essential. As his assistant Jörg van der Horst wrote on the site of the Goethe Institut: ‘It is the work of an artist who distrusts surfaces and therefore scratches them open‘.

After 120 Days, Schlingensief hardly made any films anymore and increasingly focused on theatre. There, too, he kept scratching at the scabs. In 2001, he performed Hamlet and had the group of actors that Hamlet invites in the play, played by former neo-Nazis. And in the summer of 2000 (the heyday of Jörg Haider and his rightwing Austrian Freedom Party) he locked asylum seekers in a container filled with cameras in stately Vienna. On the internet you could follow the activities of the asylum seekers as a kind of variation on Big Brother and vote on who should be expelled from the country. The project and the fierce discussions that this provoked on the square where the container was located, were recorded in the documentary Foreigners out! Schlingensiefs Container (2002).

Even after his diagnosis in 2008, he continued to make theatre. The fear he had already expressed in 120 Days, of dying early just like Fassbinder, drove him to stir the pot once more, but also to take one final look around. Because under all the disruptive chaos in his work was no cynic, but someone who genuinely loved life and even in the face of death, saw the beauty in the world. ‘I don’t have to prove that I can dance on the moon,’ he writes in his diary. ‘I don’t have to proclaim that from now on I will take care of the men on Mars, because they don’t have a voice and also want some say. No, that’s not it. It’s about the feeling that in this world – right in front of me – there are so many beautiful things.’

This Essay article was published in December 2019