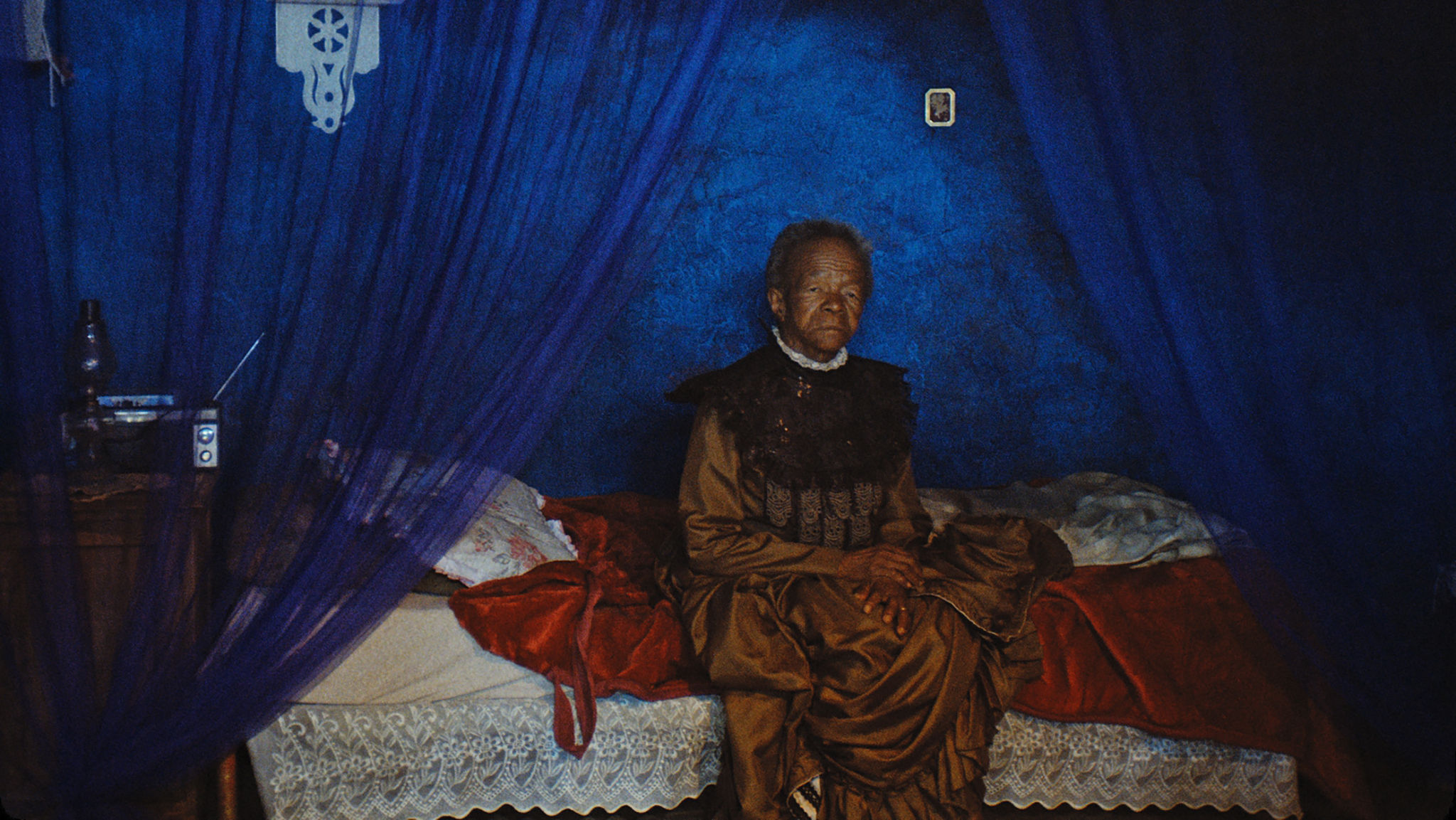 For the first time since moving to Washington D.C., I attended the New African Film Festival presented by the AFI Silver Theatre, from my living room. It was both an exciting but depressing prospect. To know that this festival, which I have gladly attended in person for now four years running, would have all of its films available nation-wide to all Americans was a comforting prospect for this dire moment in cinema. I have made it a mission for myself to get acclimated with African films since first attending this fest, realising that this continent, neglected by distributors for so long, was having a new awakening this century with important and unique cinema. I have, without fail, found at least one or two major gems every year at the New African Film Festival. This year was no different.

Once in a while a film comes around which simply slaps you across your face and reminds you that, no you idiot, cinema is as alive as it every was! There are artists making great things every day! Lemohang Jeremiah Mosese is one of them, making a mark with his latest film This is Not a Burial, It’s a Resurrection, which has gotten him the critical and festival acclaim he deserves. This movie is very much a continuation and thematic companion of his previous film which also played at NAFF – Mother I Am Suffocating, This is My Last Film About You (2019). Both movies are reckonings with political and social upheaval in his home nation of Lesotho. While Mother I Am Suffocating is presented as an experimental diary entry, one in which Mosese personally recounts his difficult and angry relationship with his motherland from Germany, This is Not a Burial plays more like a legend or epic poem.

A man sitting in a bar playing a traditional instrument tells the tale of Montoa (Mary Twala), an 80-year old matriarch whose many relatives died in a flood and were buried in the lands she and her co-villagers inhabit – called the Plains of Weeping – and fights against a planned uprooting of the gravesite in preparation for a dam. Her fight is at first a movement but eventually a defiant self-sacrifice – she plans her own funeral and burial. The obvious parallels to Kiarostami’s Taste of Cherry (1997) exist in the philosophical sense, where culture and religion clash with ideas of self-agency in death. She asks around for help just like Mr Badii, but people are reluctant. For Mantoa her death is more than a protest or gimmick to stop the building of the dam, but a singular statement about her inseparable ties to the land and nation.

While Mosese’s previous film possessed a metaphorical relationship to nationality and identity, here he is professing a physical one. The beauty of the film is evoked in the raw brightness and pastel combination of colours and landscapes that capture the country in an ethereal aura. I was shocked that the film was shot fully in digital because the camerawork and textures are exquisite, the frames immersive and elevate the film to near-mythological resonance. Yet, Montoa keeps things grounded, painfully human, and exudes decades if not centuries of history, colonialism, life, and death. Mosese has created a film of rare power where every element works seamlessly to form a hypnotic language that relates a place and a people who many of us do not know and will never know to us in a way only a true visionary artist can.

A more straight-forward almost-Hollywood tale, Back of the Moon is comfortable viewing for those probably not accustomed to African cinema. It’s a crime drama with gangs and a backdrop of Apartheid that serves as subtext for the story. A gang leader named Max “Badman” is in under pressure from the Black political liberationists to join them in the fight against the whites in power, while also trying to keep his gang from causing too much trouble in the town.

The movie is both a genre piece as well as a political drama even though the latter is only presented in speculative moments. Otherwise, the movie does its darnedest to try to evoke the feelings of a classic Hollywood mobster movie, with jazz clubs, cigarette smoke, and bloodstained carpets. The violence in the film is effective in the way that it is established and laced constantly in context with colonial violence that is about to happen but only after the movie ends. This gives the movie a purgatorial feeling where inter-community struggles and crime are shown as bare-face inconsequential and unnecessary. It also amplifies the fact that inter-community problems are purposefully exacerbated by oppressors so as to distract, sew discord, and thus fracture the community for when the real crackdown and state-mandated violence begins.

There are clichés and the character of Ghost himself tends to be a bit corny in not only his name but demeanour as the archetypal silent-but-deadly villain. The caricatures however don’t ruin the dynamic between Max and his love interest Eve, a beautiful model who is married to world-renowned champion boxer Strike. The romance has an air of danger and cool tension that perfectly elicits the atmosphere for classic Hollywood noirs. Both Richard Lukunku (Max) and Moneoa Moshesh (Eve) give the film’s best chemistry and performances. The more quiet and somber moments between the two are a perfect escape from the film’s violence. Yet, the spectre of Apartheid hangs in every scene and we know their love is doomed just like the final barks and bites of Max’s underlings.

In Ferid Boughedir’s Camera d’Afrique (1983) the spectre of colonialism is a near-constant theme throughout the history of African cinema, not only through examination of narrative, but even production and distribution histories. Much like in Back of the Moon, where Apartheid is an impending phantom looming, Atiq Rahimi’s Our Lady of the Nile considers not only the direct effects of colonialism, but what happens after the colonists have supposedly “left” and what remains in their wake. Rahimi’s movie is like a historical kaleidoscope, deftly merging the Christian colonialism of Rwanda with its more indigenous spiritual roots, and the majestic tales of its kings and queens clashing with the horrifying brutality of the Hutu and Tutsi conflicts.

Centred on a Catholic girl’s school, the movie builds its communal tension in casual steps akin to the creeping sense of political turmoil that still seems a bit far away in the boarding school in Louis Malle’s Au revoir les enfants (1987). It introduces us to the girl groups piece by piece, initially posing as a tale of friendship and camaraderie. Soon however, cracks start to form. A few of the girls get enticed by a white man to act in his film he is shooting based on an ancestral tale of a Rwandan queen. The Rwandan government starts to poke its nose into the church. The French expats and nationals start to turn a blind eye to impending conflicts.

Eventually, we see the direct result of how colonialism opens doors for its own self-benefit and immediately closes them once opportunities are used up. In sequence where a young girl is running from a roving gang of Hutus with sticks looking to beat her to death, she bangs on the doors of the Church. The French nuns sit inside praying, just waiting for the girl to either go away or be killed. A remarkable and difficult movie, Our Lady of the Nile confronts the crossroads of colonial power with its deadly generational effects.

The innocent victims of communal violence are the last to ever find justice. The Six Day War was one of many events that made up the Second Congo War. It’s called the Six Day War both because it comprised of a six-day conflict between Rwandan and Ugandan forces but also because in strange and terrible coincidence, occurred at the same time as the more well-known Six Day War between Middle Eastern and Israeli forces. The documentary Downstream to Kinshasa is a reckoning with the effects of the war, specifically a group of disabled activists who were victims of violence during the conflict.

Downstream to Kinshasa is unlike a lot of other documentaries which deal with activist groups in that it physically takes you on their journey for justice, peering into not only the demonstrations, but the group dynamics. The people here are friends and comrades in a struggle but they also are acquainted well enough to have disagreements and fights amongst each other in strategy, philosophy, and political outlook. Many of them consider the potential regime change in the country to be a good thing, but others know that simply electing a new oligarch doesn’t solve systemic and cultural problems of income inequality and inter-community violence. The documentary incorporates observational filmmaking with excerpts of a theatrical production the victims put on as an interpretative poetic representation of the war and its effects on their lives. Like a Greek tragedy, dramatic takes with stark lighting and soulful re-enactment of trauma are juxtaposed to on-street protest and demonstrations falling on deaf ears. It’s a heartbreaking effect the movie makes, to on one hand have us bear witness to the soulful pleas of the war victims in harrowing and affecting renditions of the war, with the cruel reality of feeling alone in the streets. Yet, there is hope in the documentary and a relentless passion with which these activist fight for their dignity. They are turned away by cops, military, security, you name it, but they keep coming back. It’s the only thing they can do to make their voices heard.

This Outdoors article was published in May 2021