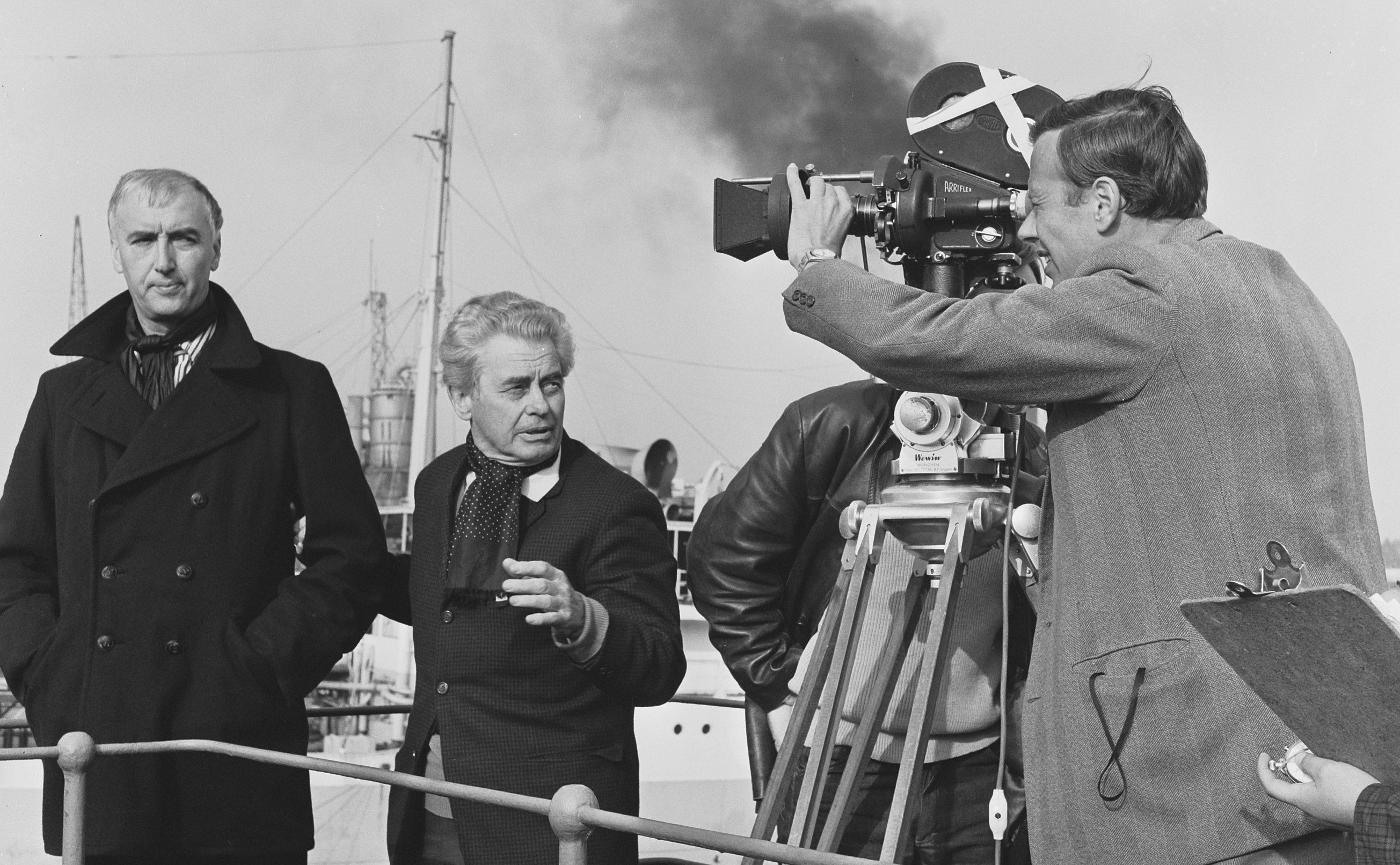 In the film’s opening, a hydrofoil courses through the waters of Rotterdam harbour, piloted by a modern version of the mythic Flying Dutchman, dressed in scuba-gear. Ivens deliberately chooses these images to open Rotterdam – Europort (1966), since Rotterdam has a strong connection to maritime history. As Europe’s largest seaport, it has served as the port of call and point of departure for the international seafaring freight trade for hundreds of years. From its harbour, countless ships have navigated their profitable course around the globe, and continue to do so to this day.

Return of the Flying Dutchman

This film also marked the professional return of Ivens to Holland since the 1933 production The New Earth, on the construction of the Delta Works flood defence, the Afsluitdijk and subsequent creation of the Flevopolder. This was to be Ivens’ last filming assignment in Holland for 33 years, since he and his then-partner Helen van Dongen moved to Paris that same year. Since his filming profession constantly took Ivens around the globe, he identified with the Flying Dutchman, the captain who was condemned by God to sail around the world until the end of time for daring to venture out on Easter Sunday.

The making of Rotterdam – Europort also meant an improvement in Ivens’ relations with the Dutch authorities, which had become strained after Indonesia Calling! (1946), an unequivocal endorsement of the Indonesian fight for independence following the end of the Japanese occupation during WWII. The Dutch government regarded Ivens’ film as treasonous, because he had been appointed in 1944 as Film Commissioner for the Netherlands East-Indies. As such, he oversaw all film production in the region, stationed in Australia. A loyal stance towards Dutch policy and interests was an implied prerequisite for the job, but Ivens proved too much of a political loose cannon to be bound by such constraints. When confronted with the effects of Dutch colonial rule (inequality, poverty, political non-existence of the Indonesian majority) he resigned his commission, freeing himself to make Indonesia Calling! into the political pamphlet, Ivens intended it to be, firmly advocating Indonesian independence. As a result, Dutch film assignments stopped, and he was branded a ‘persona non grata’ in Dutch political circles, resulting in years of bureaucratic harassment.

A meeting in 1959 with Joop Landré, former head of public relations for Philips and as such familiar with Ivens’ work (e.g. Philips Radio (1931)) was to change all that. Landré was a business associate of Rotterdam shipping magnate, Anton Veder, board member of the Association for Port of Rotterdam Interests and investor in the Dutch Film Production Company, headed by Landré. Both Landré and Ivens were keen to collaborate on a film project in the Netherlands. Several plans fell through until it was decided in 1965, and probably influenced by Veder, to make a film focusing on the industry of Rotterdam, Europe’s largest sea-port. Apart from the harbour, Ivens’ film also includes the petrochemical industry (Botlek, Pernis) and also highlights the more sophisticated ‘industry’ of Rotterdam’s cultural life, e.g. de Doelen concert building where a production of Wagner’s opera The Flying Dutchman is being presented. Here Dutch actor Willeke van Ammelrooy performs as gypsy girl Senta, whose love ends the sailor’s curse. In the dressing room, Senta meets the Flying Dutchman (played by Dutch sculptor Carel Kneulman), in one of the rare occasions that Ivens uses actors in his films directly. The character of the Flying Dutchman is then used to guide the audience through Rotterdam and witness its rich and varied existence before leaving the city, quietly and unceremoniously, by means of a hang glider.

Rotterdam – Europort presents a diverse view of Rotterdam’s population, off and on witnessed by the Flying Dutchman’s character. Young people, newlyweds, children, busy throngs of people at the city’s central station, elderly women keeping a close watch on their streets, labourers and Feyenoord-supporters: all are shown in a kaleidoscopic parade of people, that emphasises the industrial and industrious character of Holland’s second-largest city. Ivens also affectionately includes a group of rowdy teenagers into his film, so called ‘beatniks’ or ‘nozems’, coursing through the streets with revved up mopeds while going to see The Beatles in Richard Lester’s film Help! (1965). Their long hair and anti-authoritarian attitude probably will have gone against the polished image of Rotterdam that the film’s financiers would have liked Ivens to present. But the director always felt a strong sympathy for young people, as he genuinely felt that from their numbers, societal progress must come. So it was unlikely that these beatniks would have been edited out, although their brief inclusion doesn’t turn Rotterdam into a hotbed of revolutionary fervour.

The camerawork by Eddy van der Enden and Etien Becker, filmed with an Arriflex and Eclair-Coutant camera respectively, is smooth and transitional, certainly in comparison to Ivens’ earlier Chile-film Valparaíso (1963), where film students of the University of Santiago participated to learn their trade.

Also, in contrast to the Paris presented in his 1957 film, Ivens does not romanticise Rotterdam but projects a, sometimes grimy and gruff, image of the city that is in keeping with its industrial background. The film’s editing by Cathérine Dourgnon, Geneviève Louveau, and Andreé Choty is even-paced and complementary to this steadfast visualisation of Rotterdam.

The film’s commentary text, written and spoken by Gerrit Kouwenaar, serves to lay bare the city’s ‘soul’, and is also the narrative thread that fuses the separate scenes into a compatible and unified whole, in much the same way as Jacques Prévert’s and Chris Marker’s words did for The Seine Meets Paris (1957) and Valparaíso (1963). From these words, an image of Rotterdam emerges as a place of industry and hard work, in accordance with Rotterdam’s hands-on, can-do attitude. Therefore, Ivens’ inclusion of Pieter Bruegel de Oude’s painting The Tower of Babel (ca. 1568), housed in Rotterdam’s Boijmans van Beuningen museum, serves not as an example of human hubris, but to illustrate the point that a people, united in their goals and willingness to sacrifice can achieve seemingly impossible ends. This is especially true for Rotterdam, since in 1966 the city had gone through a dizzying reconstruction process following a devastating German bombardment in 1940 that destroyed most of its inner city, a fact that Rotterdam – Europort refers to more than once.

Ivens’ return to the Netherlands after his 33-year absence might have placed him in a slightly referential mood, as throughout Rotterdam – Europort Ivens refers to his earlier films through the use of similar locations or themes:

– The Bridge (1928): the Koningshaven bridge in Rotterdam harbour was the focus of Ivens’ earlier film, heavily influenced by the movement studies and city symphonies of the 1920s. Not only do The Bridge and Rotterdam – Europort have the same locus in common, in his latter film Ivens openly refers to his 1928 opus by means of the exit of the Flying Dutchman by hang glider, a scene in which the aforementioned bridge is clearly visible.

– The Seine Meets Paris (1957): workers and industry along the Seine in Paris.

Most of what Joris Ivens presents in this 20-minute short flies in the face of traditional urban documentary filmmaking. He categorises Rotterdam not through its architectural landmarks or tourist attractions, and even foregoes a triumphant climax to his film. Quite the contrary, even though he forefronts the industrial heart of Rotterdam and the resilient and industrious spirit of its diverse inhabitants, he then leaves the city unceremoniously through the Flying Dutchman character, restless and unable to find peace. But by then Rotterdam, in Kouwenaar’s words, ‘has flowed through him’ and from this experience a grandiose and evocative portrait of a world port emerges, one that set a genre benchmark for times to come.

This Framing the City article was published in March 2020