City of Photos: the imaginary world inside India’s photo studios 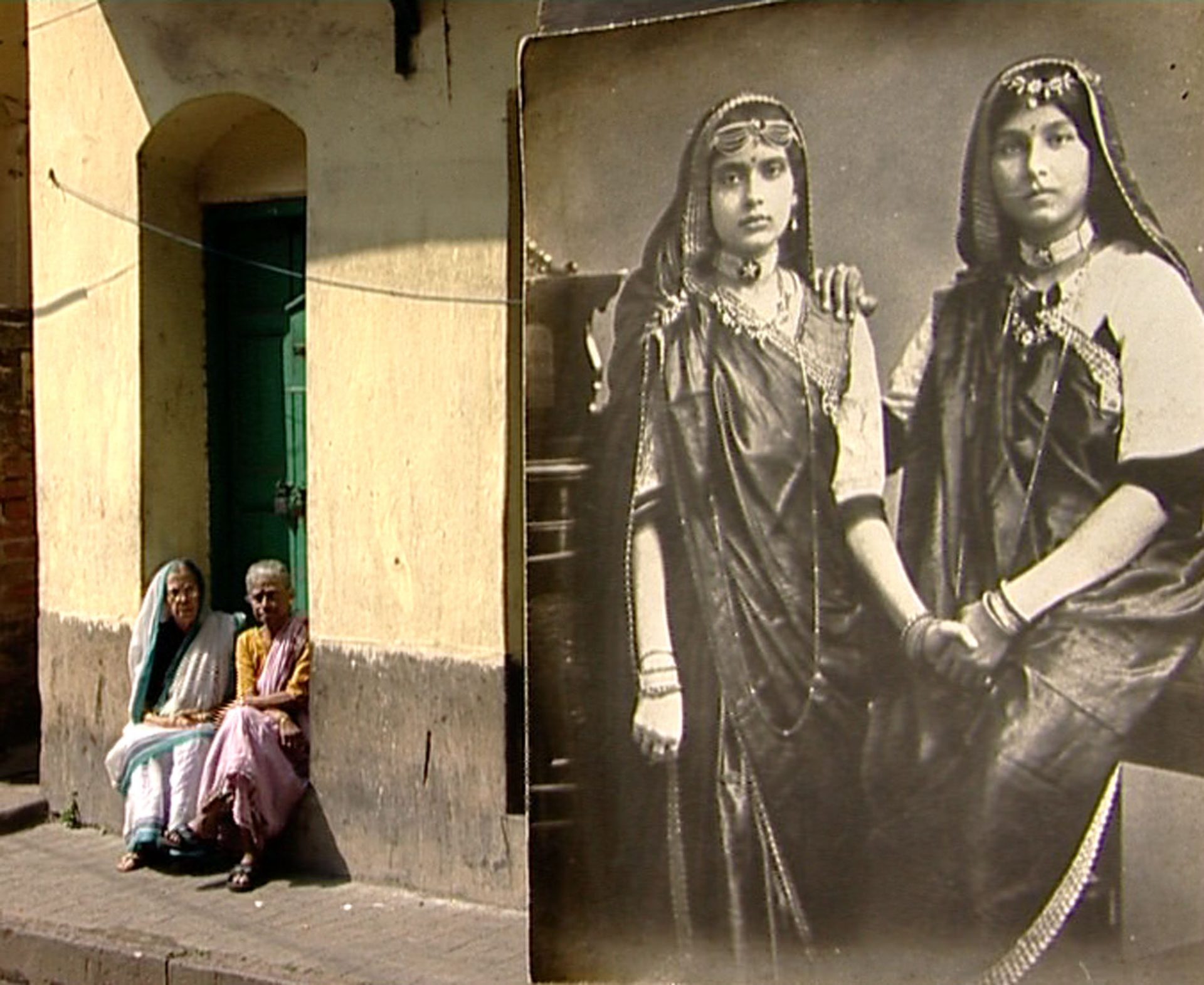 Go to any touristic place nowadays and you see dozens of people taking pictures, either with a photo camera or with a smartphone. Taking pictures seems rather a habit than a tradition or a meaningful ritual. How different was it in the past, when you had to visit a photo studio in order to get a portrait of you and your family, for example.

In the West, photo studios have become something out of the past. In India, however, these studios still exist, in large numbers. Photography is for many families still a core business. This business not only contains making photos, but also photo editing. What is the meaning and the importance of photography in India in the 21th century? Nishtha Jain captured it in her documentary City of Photos (2004). A man sits down on a chair in front of a plain cloth. The tie and the blazer he is wearing give him a professional look. His eyes are wide open, while the photographer adjusts his head a little. As soon as the photo is made, the man stands up. He takes off the tie and blazer and hangs them on the hooks on the wall of the photo studio. Apparently, they did not belong to the man himself.

Making a photo portrait in India isn’t just making a photo. As Jain says at the beginning of the film: “Whenever my mother bought us new clothes, we knew what was coming.” For her, going to a photo studio was a real trip, a day out with the family. But this wasn’t the case for everyone, apparently. Many portrait photos pass along in Jain’s documentary. Most of them show people looking uncomfortable, tensed or bored. Not everyone enjoys a visit to the photo studio as much as Jain herself did when she was a little girl.

Looking like a film star appears to be standard when it comes to Indian portrait photography. In one of the studios Jain visited for her documentary, a young lean man undresses his torso. He is getting ready for the shoot by contracting his muscles like a bodybuilder. The photographer tells him how to stand, which position he has to take and how he has to look. The pose is Hrithik’s pose, according to the young man. “You look like Salman Khan,” says the photographer.

It looks unnatural, like the young man has taken on another identity. As if he has to be someone else, someone completely different than he really is for a couple of minutes, just for a couple of photos. It might not be strange that there are just a few pictures that show people happily smiling to the camera in Jain’s documentary. Certainly, after seeing the scene with a woman that is continuously asked if she can withdraw her stomach, by the photographer. But, photography is more than posed portraits. Photos can also function as evidence. City of Photos shows pictures taken of Muslims posing in front of their ruined houses. They have been plundered and demolished during anti-Islamic riots. In this case, people didn’t go to a photo studio and choose their own background. The background was chosen for them and the photographer came to them. The pictures don’t show another identity, another version of the persons they are. They show the deepest truest emotions, set in reality.

This chaos is in sharp contrast with the world inside India’s photo studio. Here, there are no busy streets, no plundered houses, no slums, and no poverty. People pose in front of cloth on which beautiful gardens are painted on. Sometimes, they even depict the Taj Mahal! And if not, it can always be added later afterwards, with a little help of Photoshop.

“Maybe an artificial garden is better than none,” says Jain. Photo studios, in this sense, can create an imaginary world. A fantastic place to which people can escape if life is getting too hard. For a moment, you can be in another, more beautiful place. You can be the person you’ve always wanted to be and forget all your troubles.

However, this imaginary world doesn’t have to look like a peaceful place. On the contrary, backgrounds that portray 9/11, the Odisha Cyclone or the aftermath of a train accident are often the most popular backgrounds of photo studios. It attracts customers, according to studio owners. Jain might have an explanation for this: “Standing against destruction, you can feel ‘I have survived.’” It creates a sense of immortality. Entering the imaginary world of a photo studio is not evident for everyone. A studio owner tells an anecdote about a rich woman who wanted a portrait of herself, but wasn’t allowed to be seen by a man. Therefore, the owner explained to his wife how to make a picture so the rich woman could get a picture of herself despite the restrictions.

Jain also spoke with a Muslim girl who loves to be photographed and had sweet memories of the photo shoots with her sisters. Unfortunately, photography is a sin for Muslims, so her mother had to organise these trips to the photo studio secretly and hide all the pictures that are ever made. Which is a pity, according to her daughter, because she loves the idea of having a large picture of herself hanging on the wall.

And what if a family member dies and the family has no picture of him? Photographers are often asked to make a portrait of the dead person, as a living man or woman. They make pictures of the deceased and actually paint a picture of him or her. This way, the family can keep their memory alive. In the small cities of India, photography is not just about taking pictures of everything you come across. Many do not even possess a camera, let alone a smartphone. Fortunately, dozens of photo studios exist. They function as fantastic places, where people can escape their hard daily lives and be someone else in another, more beautiful place for a moment. It can make you feel like a survivor. Despite the troubles you have been through, you’re still able to stand there, right in front of the accident, the cyclone or any other incident.

Photography creates memories, either sweet or cruel, made by only a camera, or with a little help of Photoshop.

City of Photos is currently available online for free, streaming on the IDFA website here or directly on Vimeo here.