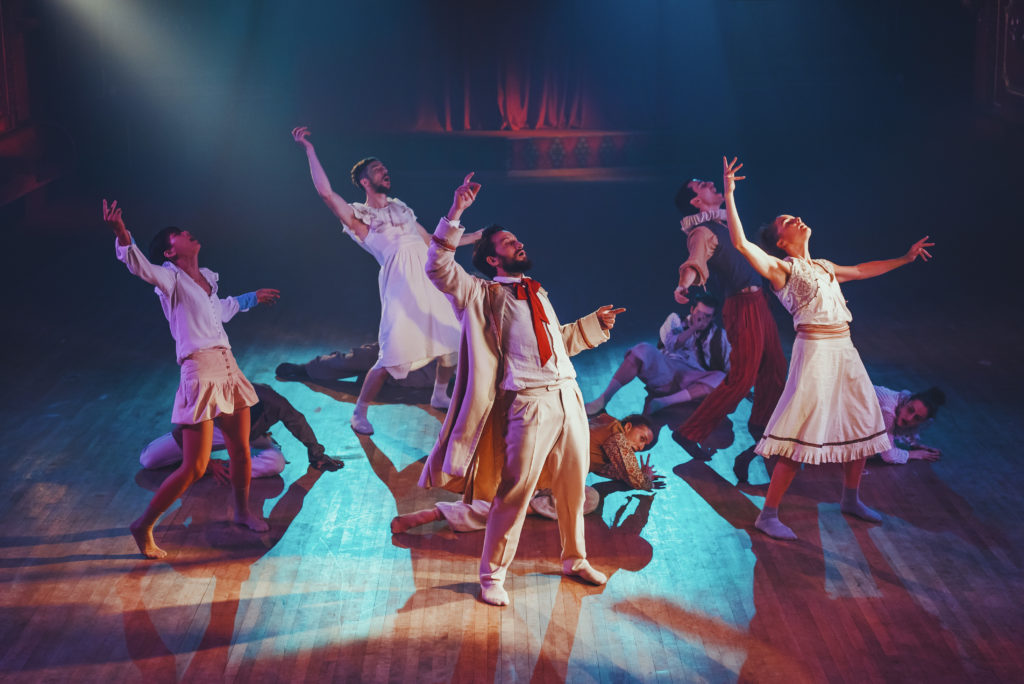 From 25 till 29 March, the 17th edition of Cinedans should have taken place in EYE Amsterdam. However, because of the measures against the coronavirus, the festival had to be cancelled. The organisation decided to put a small selection of the original festival program online, which could be enjoyed at Cinedans WEB. Frameland reviews the highlights of the online festival and the films of the official program that can still be watched online.

When you make a film in Paris’ Panthéon, it is most unlikely that your film production will fail. However, adding something extra is quite a challenge. With The Great Ghosts, Directors Pierre-Hubert Martin en Louise Narboni succeeded in creating some poetic adjustments. In five different thematic choreographies, all set at another location in the Pathéon, dancers try out the very unique forces of the planet Earth. They fight against gravity, try to find their balance and walk along with the turning of the Earth, or in the opposite direction. Because of the position of the dancers and choreographies, it looks like they are integrated into the space of the Panthéon, as if they themselves are pieces of art. The dancers are accompanied by opera music, a meditative voice-over or silence. The result takes your breath away.

Another beautiful film of the online program of Cinedans is Clowns (2018) by Hofesh Shechter. In the beautiful historic Rivoli Ballroom in South London, ten dancers bring different gloomy choreographies to the stage. In the mysterious darkness, several murders take place. Fortunately, the dancers continuously rise up from death and continue dancing in an aggressive way. The tribal dance consists of both loose and powerful movements that match the stirring music. Blurred close-ups of the individual dancers and observational shots of the whole group alternate.

Cinedans WEB presented a Surprise Short every day. Mudanza Contemporanea (2018) by Teo Guillem was one of these shorts, a film about a man (played by Guillem himself) who dances with his own creations. Enveloped in a pile of towels, with some plastic garden chairs on his neck or pipes in his socks, he performs some weird dances. It looks very funny, however, the atmosphere of the film changes halfway. It appears that the man doesn’t want to act like a clown. It appears that he is haunted by a ghost of the past.

Originally, one of Cinedans’ was a special focus on dance films from Hong Kong, in cooperation with the Jumping Frames Festival. One of the shorts that really stood out in this selection, was Oh! Million Fist! by Hugh Cho. This energetic film starts out as if it’s a black-and-white film by George Meliès in which dancers pop up and disappear again. Suddenly, we find ourselves in an industrial building. A group of male dancers wearing oriental masks dance a choreography that contains not only dance but movements of martial arts as well. On top of this, the camera appears to be a dancer as well. The whole choreography is filmed from his point of view. Oh! Million Fist! can be seen above, and other dance films of Hugh Cho can be watched on the artist’s website.

Another focus program was called Black Light dance, which contained some dance films from Africa and its diaspora. In Zombies (2018), director Baloji complains about the fact that everybody has grown together with his smartphone. Human beings don’t pay attention to each other anymore. In fact, Zombies combine several music videos that are filmed on the street, in the clubs and at the hairdressers’ of Congo. The up-tempo rap music has a clear message: put your phone away and start dancing again! Watch Zombies it now and dance along!

Are you in for something more absurd? In Shadow Animals, a young girl called Marall is taken to a party by her two fathers. From her perspective, we observe the special and sometimes recognisable behaviour the adults at the party express, their rituals and the way they correct each other’s unacceptable behaviour. Not only the dance in the film is lead by rules, other aspects of the party seem to be choreographed as well. Marall doesn’t feel comfortable at all and decides to hide. Then, she discovers a shadow in the house. Where does it come from? And is she the only one show sees it? Shadow Animals can be watched on Vimeo On Demand here.

This Outdoors article was published in April 2020