Dunkirk Double Days: The Story of a Stand-in 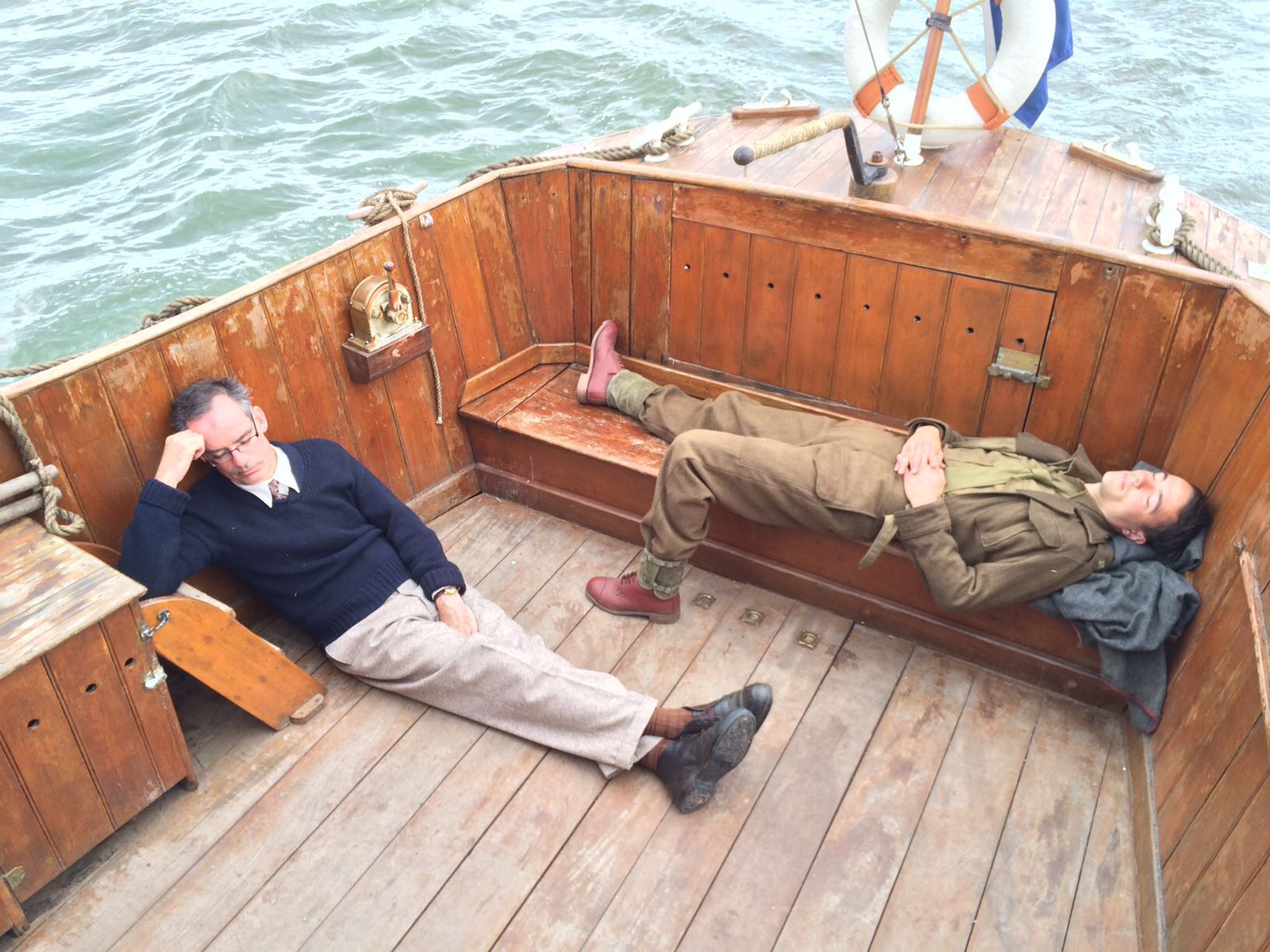 Roy van Roeden is a teacher in Dutch language and literature in the city of Zwolle, in The Netherlands. After work, he often enjoys a few beers at his regular bar, De Hetebrij. Where he knows the other regulars and other personnel well. One monday night he’s there as usual, having a beer and reading the paper before going home to make dinner. He’s approached by a young man, who says he’s been looking for Roy. Why? He can’t really say too much about it. This is where the secrecy starts.

But would Roy like to be part of a film shoot for two days? Roy immediately connects the dots, despite the secrecy, and figures out that this has to do with the production of Dunkirk (2017), that has taken over the nearby town of Urk and most accomodations in the city. Roy says yes. The young man turns out to be working for a casting agency. and is looking for a stand-in for Mark Rylance. And Roy fits the bill, thanks to his posture and the back of his head.

So, could Roy start right away, maybe even tonight? “Hold on, I’m a school teacher, I can’t just take off for two days.” So Roy goes to call his team supervisor and explains the situation. She’s very cooperative, makes a bunch of calls and in the end he’s free for the next two days. Great, they’ll pick him up at four in the morning.

So the next morning at 4 AM a big black SUV stops in front of Roy’s home to take him to the set. Nobody is able to tell him what will happen there though. The secrecy continues. He notices signs pointing to ‘BB’ along the way: Bodega Bay, one of the historic sites where the Dunkirk evacuation took place and the name for the closed set in Urk where the movie is being made for a month. Upon arrival, after passing tight security, Roy enters a sort of separate state within Urk, different from the world outside. Shut out from the world.

Roy is led to a great hall with food for the whole crew. While he’s eating a sandwich, somebody shoves a large stack of papers under his nose. They want him to start right away, but sign those papers first. Meanwhile, somebody shouts at him from behind: “What’s your shoe size?” Then he’s led to a row of trucks, and pointed to the back of one of them. “Your dressing room for the next two days.”

Once outfitted in Mark Rylance’s clothes and made up to look like Mark Rylance, Roy meets his costars. Another Dutch stand-in, but also the young actors who play the young soldiers in the film. Roy asks of one: “Who are you?” And the kid replies only with “I’m your son.” Roy is bewildered, since he still has no idea what’s expected of him. He’s not been told anything about the film, and certainly not about the character Mark Rylance plays or anything having to do with script or story. Nobody is allowed to tell him. Everything is shrouded in mystery. Then they go on the boat, The Moonstone. The genuine article, from 1940 or the late 1930s. As are all the boats around them. It’s an impressive sight, all these old boats taking off to an area that can be made to look like open water. There are also two huge battleships. And one modern boat, director Christopher Nolan’s personal catamaran, specially outfitted with huge IMAX camera. With which he can film close-ups from over half a kilometer away. The whole fleet is surrounded by orange jet skis: security to keep prying eyes at bay.

So what’s Roy supposed to do? There’s no camera on board. A member of the crew says that probably, at some point, Roy will have to take the wheel. Maybe… “And then?” “Steer.” Somebody will say ‘prep’ over the radio, for ‘prepare’. This would mean that in five minutes, maybe they’ll get a sign filming would start. Roy hears ‘prep’ all day, every time putting his glasses in his pants pocket to look the part (from behind). But nobody ever says that they’re being filmed. So mostly it’s waiting, waiting, waiting, waiting, waiting, doing nothing and then returning to harbor after twelve hours.

Roy did enjoy being able to watch other scenes being filmed. He sees soldiers jumping into burning oil (completely biodegradable) in the water, explosions in the water, explosions on the battleship, and then there were the Spitfires. Especially those were beautiful to watch. There were two real Spitfire planes that came flying in, and one model version that was controlled remotely from a helicopter. So, the helicopter could fly directly around it, follow it and film it while it did all kinds of manoeuvers. Spectacular to see happening in the sky above him, and it probably looks even better on screen. There was also a boat specially rigged to be filled with water and sink. After a take, the water was pumped out and it was readied for another sinking. So Roy got to see a lot of beautiful things that day, but wasn’t filmed himself as far as he could tell.

Lunch was on one of the battleships, which was a challenge in itself, because for any movement he had to jump off the boat onto another that would take him to the battleship. Which turned out not to be a real battleship, but just made to look like one. Inside it was a Dutch museum boat, that was chartered by the production for three months and redesigned on the outside to look authentic.

At the end of the day, it’s a wrap and Roy is returned to the harbour. Still having no idea what’s to happen, he asks if they’ve put him up in a hotel or something, but no. Everything’s full and anyway, they’d like him to sleep in his own bed. He’s driven back and told that he can sleep in a bit, because tomorrow they’ll only pick him up at six in the morning. The next day, Roy wakes up to rough, stormy weather. In the car, he asks: “Surely we’re not going out on the water today, on account of the storm?” In response, he’s given motion sickness pills. “Here, take two for a start.” “But is it safe to go on the water, in that little boat?” “Sure, don’t worry about it” “Ok…” Soon enough Roy is on the boat again, that now goes up and down and up and down quite a bit in accordance with the stormy weather.

Later, when asked if he wants some lunch, he says yes, but on a steadier surface please. So he gets taken to a small ‘work island’ or ‘stunt island’. But the journey there is a perilous one. If jumping off the boat onto a speedboat that will take him there was hard the first day, it’s a lot harder now on the unruly water. “How?” asks Roy to the captain. “Just jump, I’ll tell you when.” Roy makes it, and is enjoying lunch on the island just as the stunt crew is about to film the crashing of a Spitfire.

It’s a perfect model, made just for the purpose of crashing. A sort of catapult is prepared to launch the entire model into the sea. Roy has the luck to be on the island just as they are about to fire the Spitfire into the air and then into the water. Unlike on the previous day, this is not so impressive. “Pfff” and “pof” are the sounds Roy uses to describe the launch and crash in the water. It probably looks really impressive in the film, with added sound effects. Meanwhile, the real Spitfires fly over and make a very impressive, sonorous sound.

Then it’s back to the boat, and waiting, waiting, waiting and waiting again. Until Roy and a fellow stand-in have to leave the boat, while Christopher Nolan and camera crew go aboard to film a scene. So when there’s finally some filming being done on the Moonstone, it doesn’t involve Roy or Roy having to do anything. But Roy relishes the opportunity to meet Christopher Nolan up close, because he really liked Memento (2000). Afterwards, Roy enters the boat again and they sail around for a few more hours, in that tumultuous weather. Roy puts his glasses away safely to make sure they don’t fly off. And then they’re told they’re done, and are taken back to the harbour, Bodega Bay.

Roy estimates that in total, on the first day he spent 12 hours floating around in the boat and ten hours on the second day. So he asks: “What now?” “We’ll take you home, thank you for cooperation.” “But nothing happened?” “That’s how it goes sometimes.” Roy’s not sure if he was ever filmed, and pretty sure he won’t be in the finished film. He mostly did a lot of waiting around on a boat, and some sleeping (the first day at least), but the whole thing was a beautiful experience.

This Interviews article was published in March 2018