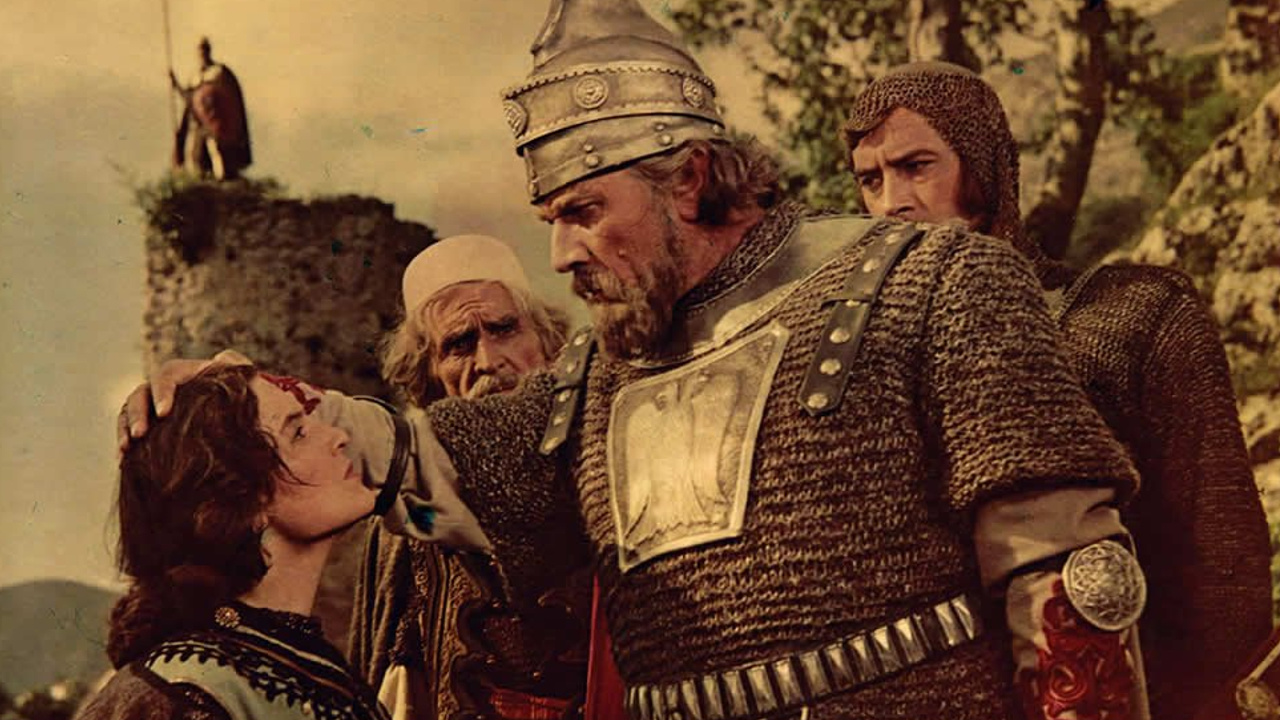 Skanderbeg is Albania’s national hero. In a way then, it makes sense that the first full-length fiction feature made in Albania was a historical epic on his exploits. As much as it makes sense to kick off our new feature on Albanian cinema this fall with a closer look at The Great Warrior Skanderbeg (1953).

When I first visited Albania, Skanderbeg was hard to ignore. A big statue of his likeness, sword in hand astride his horse, is a prominent feature of the central square of capital city Tirana – which is of course called Skanderbeg Square. Another building you will find on said square is the National Museum of History, a museum that devotes no less than three halls to Skanderbeg, while conveniently skipping over the centuries of Ottoman rule that came after his resistance to the Ottomans. And while many of its exhibits came accompanied with texts in English, the halls dedicated to the national hero were curiously sparse in that regard – as if this was mostly meant for Albanians.

So it’s safe to say that untangling the historical figure of Skanderbeg from the near-mythical national hero will be very difficult, if not impossible when considering popular Albanian sources such as The Great Warrior Skanderbeg. We’ll have to leave that to professional historians and other academics, for now. But that doesn’t mean there’s not a great deal to be gleaned from The Great Warrior Skanderbeg, both in what it says for Albanian culture and popular memory, and just as a piece of rousing entertainment.

That is, of course, operating on the assumption that The Great Warrior Skanderbeg is indeed an Albanian film. We should acknowledge that it is a Soviet-Albanian co-production, directed by a Russian filmmaker Sergei Yutkevich. Who would later direct a number of films on episodes in the life of Lenin – make of that what you will. Yutkevich worked with Soviet screenwriter Mikhail Papava, though both also worked with Albanians – and Albanian prime minister/dictator Enver Hoxha apparently personally supervised the production.

Thus The Great Warrior Skanderbeg is wholly the product of its time and circumstances, from that specific era when Albania was a communist country in league with the Soviet Union, and the Soviets would gladly help mount this large scale production. Only three years later Soviet-Albanian relations would turn very sour, after Hoxha renounced Kruchev’s De-Stalinisation, but that’s really a story for another time.

For this is the story of Gjergj Kastrioti, a nobleman who grew up as a hostage at the Ottoman court in the 1420s and 30s. There he rose to the military ranks in the service of the sultan, to the rank of Bey. In The Great Warrior Skanderbeg, sultan Murad II personally gives him the honorific Iskender Bey, after Alexander the Great, which turned into Skanderbeg later (or at least it did in English, locally he’s known as Skënderbeu or Skënderbej).

Sent as a military commander against the enemies of the Ottomans in the Balkans, he switches sides at the Battle of Niš in 1443, and works with Hungarian and Polish forces to defeat the Ottomans. The Serb forces also involved aren’t mentioned, which probably has something to do with political relations with Yugoslavia at the time. The same goes for the depiction of the Ottomans as “Turkish dogs”, overly aggressive macho figures who are defined purely by a lust for blood and conquest, which is not only quite Orientalist but also a reflection of Soviet-Turkish political relations in 1953.

This battle itself in the film is as spectacular as can be expected in 1953, making maximum use of the mountainous vistas of Albania. Which serve as a beautiful backdrop for several more battle sequences, and many a scene featuring Skanderbeg and his people at the top of a mountain or hill. What The Great Warrior Skanderbeg lacks in nuance, it makes up for in grandeur.

Which naturally further undermines any chance at nuance or historical accuracy, but is entertaining to watch. Skanderbeg’s deep, booming voice is matched by his battle prowess. Which allows him to manage to rally all the Albanian lords and clans to his cause of resistance against the Ottomans. Including, in probably the best scene of the film, through an arm wrestling competition.

In The Great Warrior Skanderbeg, all this also means the birth of a national consciousness. As with so many nationalistic tendencies, such a consciousness really only took hold in the nineteenth century, and so did the myth of Skanderbeg as presented in the film. There is also some mention of Skanderbeg of a hero of Christian Europe, holding the Ottomans at bay from 1443 to his death in 1468, a period during which the Ottomans conquered Constantinople.

At the same time, betrayal and death also come from other Christians, namely the Venetians (the Republic of Venice also held lands in what is now Albania). Although there is definitely a historical basis for this, it also feels like a repudiation of Christian unity against what in the film is depicted as the religious zealotry of the Ottomans. After all, religion was largely suppressed and/or oppressed in communist Albania.

Perhaps the clearest sign that The Great Warrior Skanderbeg is not just a reiteration of the nationalist myth around the historical figure of Skanderbeg, but specifically one made under the communist regime, is that when clan leaders consider no longer accepting the rule of Skanderbeg (and thus by extent, betraying Albania), they do so because thanks to him, peasants do not obey them anymore.

Because Skanderbeg could only be a true Albanian nationalist hero and a true communist hero if he, besides unifying all Albanians, he also made peasant and nobleman equals. This all makes for a rousing historical epic, and perfectly serves the agenda of Enver Hoxha, who presented himself as an heir to Skanderbeg’s legacy. And if his strand of communism is but an extension of the great Skanderbeg himself, it stands to reason that nothing is more Albanian than Hoxha’s communist regime. Historical accuracy was never a goal here.