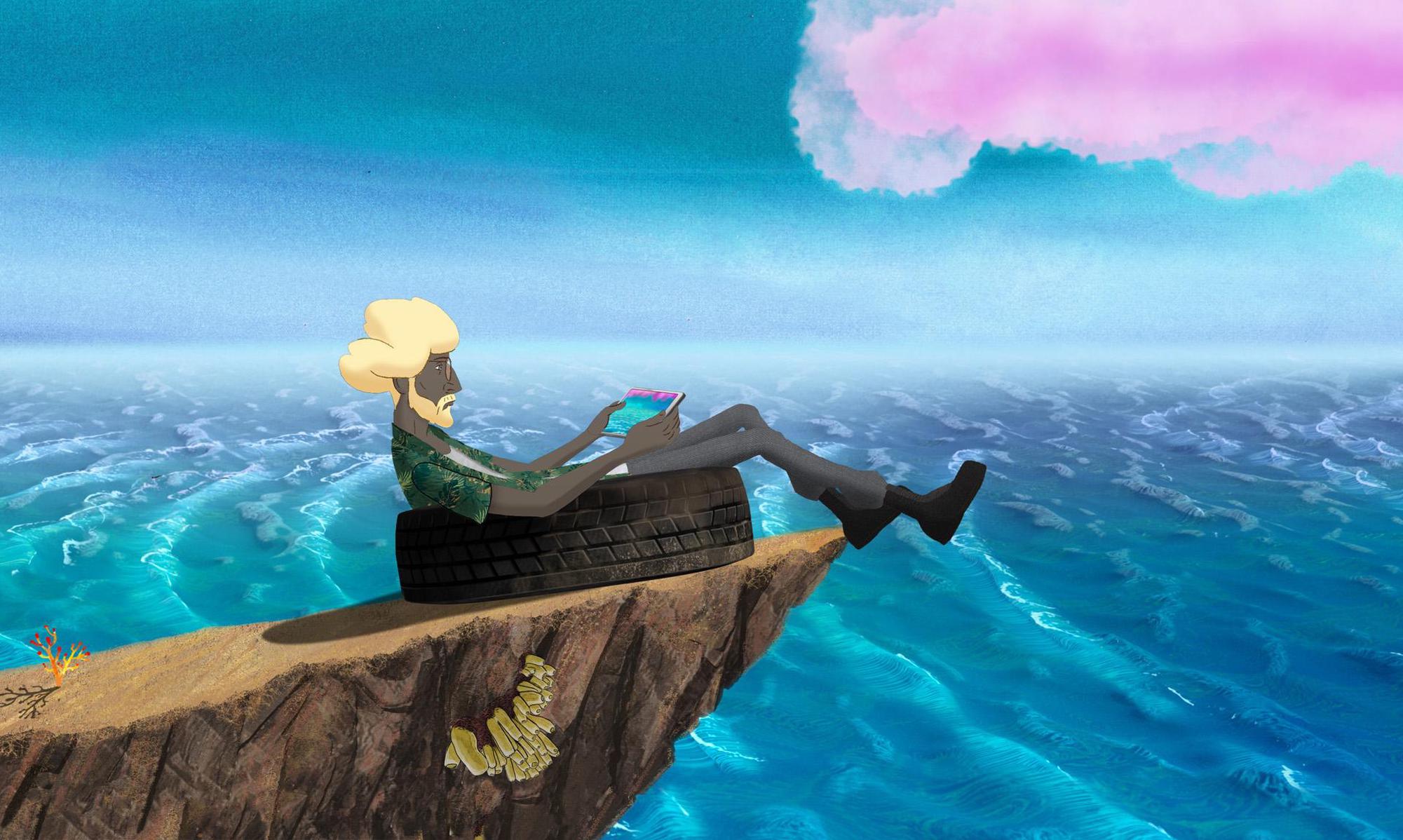 The IFFR programme wouldn’t be complete without some extraordinary animation films. In the 2022 edition, you could enjoy three animation productions that all addressed a serious topic in a fantastical or originally animated way. The refugee crisis, drug addiction and cultural revolution in China in the 1960s, how do these phenomena influence a single person’s life and what does a personal story say about a whole society? The Island, Battlecry and Silver Bird & Rainbow Fish show you the answer to these questions in their very own way.

In 2020, I attended the 09:00 screening of Anca Damian’s Marona’s Fantastic Tale (2019). Yes, it was early and I needed coffee to keep my eyes open but this colourful, magical animation film about a dog’s life was worth it! Since then, I’ve been looking forward to Damian’s next production and here it is: The Island.

This time, the story is not told by an animal. The Island is a modern-day musical retelling of Robinson Crusoe, taking the familiar story in new and unexpected directions. Robinson is alone on an island, as usual, but from there he observes the drama of a refugee crisis that’s playing out right in front of him. One day, a man washes ashore. He is the sole survivor of a boat full of people trying to reach Italy. Robinson calls this man Friday, since Friday is the day the man was found. Through brightly-coloured images, The Island reflects on human behaviour during a crisis. It zooms in on our hypocrisy in our search for paradise.

This serious topic is wrapped up in a mix of poetic dialogues, intriguing background music and funny visual elements. In the beginning, Robinson sees the world through a tablet and by doing this he sees a representation of the world that differs from reality. It feels like criticism on how most people consume reality, through a screen, and this way create an image of what they want to believe is real.

However, The Island is above all a lot of fun to watch. You might have no idea where the storyline of the film leads you. The division in chapters does give the film a structure but that doesn’t necessarily mean that it makes it more comprehensible. Does that matter? On the contrary! The best way to watch The Island is to immerse yourself in the looseness, in this magical atmosphere and travel along with the characters on their way to paradise. Whatever paradise may be.

Battlecry is Yanakay’s first feature film and is about The World Bank employee Haya and ex-soldier Soji who together try to put an end to a crisis. Japan is in the grip of a new drug, called Golden Monkey. This drug not only arouses boundless energy in the user’s body but it also changes human beings into shadow monsters. This way, they are perfect cannon fodders for fighting wars.

The film starts in a stimulating way, with up-tempo music and flashy animated images of a city that is lit up by neon lights. After this colourful introduction, the film is dominated by dark colours, creating an ominous atmosphere. One you find in detective series as well, a feeling that is reinforced by the inscriptions onscreen telling you the location where the detectives are. Against this background, Haja and Soji not only try to save Japan from the Golden Monkey. Along the way, they reveal personal stories about their difficult childhood as well.

These stories give the characters more personality, which is needed in a film that looks like a 90s videogame. The characters move a bit slow and show little facial expression which makes it hard to keep your attention to the storylines on the one hand and to feel sympathy for the characters on the other hand. The look of the film is original though, so Battlecry is worth a try.

“Our family is special,” you hear at the beginning of Silver Bird & Rainbow Fish. The tone of this inventive essay film is set. Filmmaker Lei Lei interviews his father Lei Jiaqi about their family history, which is set against the background of China in the 1960s. We never see father and son, we only hear their voices intermingled with an audio track on which the voice of their father and grand-father Lei Ting can be heard. At a patient pace, a tragic family story starts to roll out.

When Lei Ting was sent to the countryside to work, Lei Jiaqi stayed behind with his sister and ill mother. When his mother passes away, Lei Ting is forbidden to go back to live with his children. The children were sent to an orphanage. The interview between father and son is illustrated with black-and-white archive footage: family photos, propaganda images and video material. However, Lei Lei added an extra layer with colourful stop-motion clay animation. It might feel strange in the beginning, but this extra layer not only adds colour to the archive footage but brings them – and so the family history told by father, son and grandfather – alive as well.

Silver Bird and Rainbow Fish tells a family story against the background of big events in Chinese history, such as the upswing of the communistic party CPC and the Cultural Revolution. It’s a personal story, but probably recognisable for many Chinese families living in China in the 1960s as well. The film is divided into several chapters and jumps in time from 1959 to 1985, the year Lei Lei was born. This way, Lei Lei has created both a very personal family record and a document with an import socio-historical value.