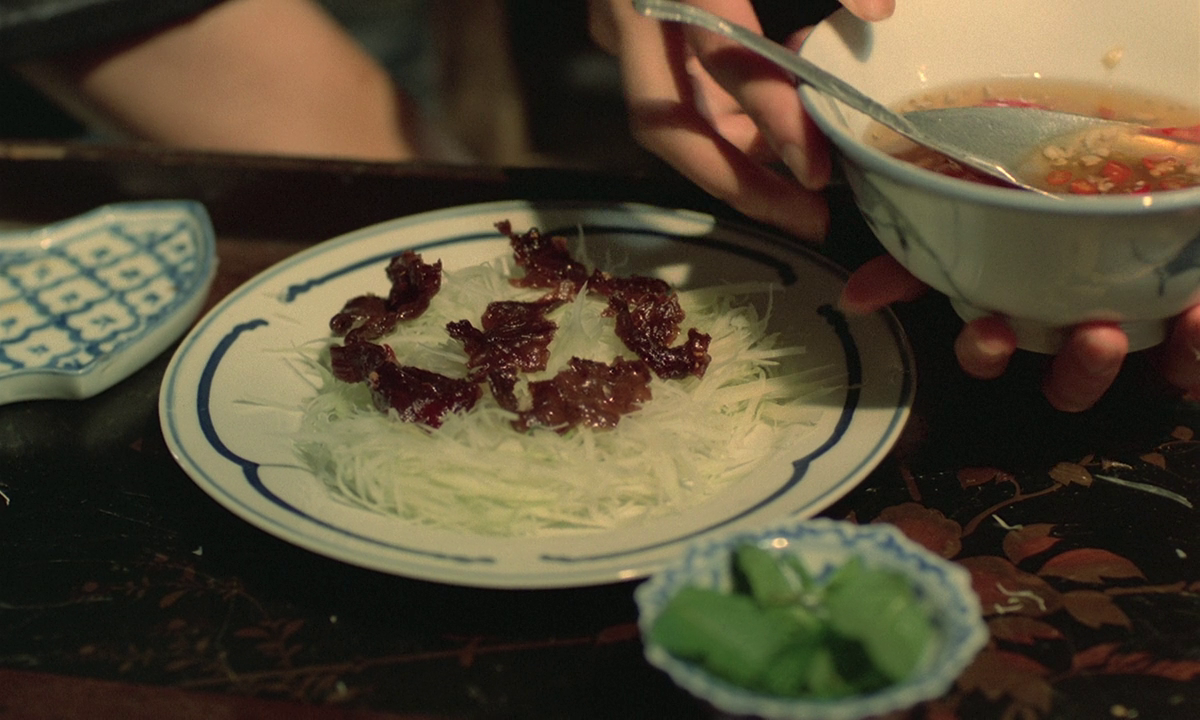 Nuoc mam, is there anything better? Tastes may vary of course, but I personally can’t think of anything that beats this Vietnamese fish sauce. My connection to Vietnamese restaurants mostly comes from restaurants, sadly. It was only a few years ago I learnt from my grandmother that I’d been dipping the wrong rolls in the nuoc mam for decades. But I’ve grown to love nuoc mam with any and all kinds of Vietnamese food. Perhaps the most satisfying the scene (for me at least), therefore, in the oeuvre of Tran Anh Hung, comes early in The Scent of Green Papaya (1993).

Protagonist Mui, a servant girl for a rich family, is preparing their meal. As a finishing touch, she grabs a bowl full of delicious looking nuoc mam, and pours it over the dish she made. My mouth was watering. But besides being the most satisfying moment, it was also the only time I connected to the works of Hung on a ‘Vietnamese’ level. Meaning that, while watching films for previous entries in this series of articles, I experienced vague jingoistic feelings of Vietnamese nationalism I’d never felt before (being of mixed Vietnamese-Dutch heritage), I didn’t feel such a connection this time around.

For the most part, watching the three Vietnamese films by Hung (sometimes referred to as his Vietnam trilogy) felt just like watching any three 1990s East Asian slow cinema films, except for specific cultural practices. More similar to the work of Hou Hsiao-Hsien or Naomi Kawase than other Vietnamese films I’ve seen so far. Of course, this could be because of my relative ignorance of Vietnamese cinema. The Scent of Green Papaya, Cyclo (1995) and The Vertical Ray of the Sun (2000) are all great films, to which I mostly connected to on an aesthetic and sometimes on an emotional level. But I never felt more Vietnamese, the way I felt that first time watching a Vietnamese war film in February.

Not that this is in any way a critique of Hung’s work. Any filmmaker who has the ambition to make his films “feel like a caress,” that “have a gentle smile floating through it, a sort of floating feeling,” and actually accomplishes this, deserves all the awe and praise I can muster. That quote was given to the London Independent in an interview on The Vertical Ray of the Sun, but could easily apply to The Scent of Green Papaya as well. Occasionally there’s a feeling of floating to Cyclo as well, though its protagonists live under a crushing weight most of the time.

What struck me most about this thematic trilogy of sorts was its visual style and atmosphere. The slowly gliding cameras of Benoît Delhomme (on Scent & Cyclo) and especially Mark Lee Ping-bing (who shot Vertical Ray) register Hung’s characters as they move in and out of frame, and in out of frames. For they are frequently filmed through and against windows, door openings, mirrors and other naturally occurring frames. This has a multitude of meanings, the clearest being a sense of entrapment, of people being trapped in roles thrust upon them by societal and familial expectations, by marriage, by conventions, by fears or by emotions. I must admit the full meaning of all these frames, which Hung claims to be all very deliberate and meaningful, at times escaped me. Nevertheless, I found them very aesthetically pleasing.

This framing is only part of what makes Hung’s cinematography beautiful and atmospheric. The use of close-ups in all three films has a very specific, almost palpable texture to it, especially the detailed shots of food and nature scenes. Despite the latter, all three films take place in the two largest cities of Vietnam, Saigon (The Scent of Green Papaya & Cyclo) and Hanoi (The Vertical Ray of the Sun). And both Scent and Vertical Ray take place mostly indoors. In the case of Scent, this was done at least in part because the film was shot entirely on a sound stage in Paris. Where Hung met his wife and leading lady in all three films, Tran Nu Yen-Khe. Her face is perfect for his cinema: open, full of expression yet also sometimes inscrutable and mysterious.

Together the three films create an interesting image of Vietnam, that’s likely informed by Hung’s time living in France as his time in Vietnam. It’s a portrait full of love, family bonds, class divides, wealth and good food, but also of betrayal, despair and poverty. Despite that class difference between the serving staff and the rich family in Scent of the Green Papaya, there’s a harmony in this imagined Saigon that takes place in 1951 and 1961. Despite taking place during those tumultuous times, no mention is made of either the French occupiers (who were at the time at war with part of the country), the Americans who were running interference before their invasion, or the split of the country into a Northern and Southern half in 1954.

Cyclo takes place in the same city, which is now called Ho Chi Minh City, which still has lush greenery between buildings but also piles of garbage and grinding poverty. Even where you can ride the cyclo, the bicycle taxi, is determined by ruthless gangs, one of which slowly draws in the cyclo driver and his sister, for different ends. Tony Leung Chiu-Wai shows up with his effortless cool, a cigarette always dangling from his mouth, as the gang’s enforcer and pimp. But the crime life ends up tearing him down just as much as the two protagonists.

The Vertical Ray of the Sun is a return to the interiors of the first film, though this time they are set in Hanoi (with a sojourn on a lush green island) and the class is definitely upper. Three sets of two people, two married couples and one a brother and sister living together, all seem to live happy lives. The three women are all sisters, connecting all into one family. The film opens with the death anniversary of their mother and ends a month later with the death anniversary of their father. In between, their idyllic happiness is upended by exposed secrets of betrayal, cheating, miscarriages, lies and burgeoning incestuous feelings.

Yet, what lingers afterwards is not the drama, but the sisters’ camaraderie in the scenes of them preparing dinner together, in which their conversations range from what is the writer’s soul to what the texture of a penis fried in garlic would be. What lingers is the scene of brother and sister slowly waking up in their apartment (full of frames within frames) set to Lou Reed songs. Similarly, all three films luxuriate in scenes of women singing, either professionally or in the home. That is ultimately the impression that will last the longest in my mind: of a Vietnam in which life passes by languidly, occasionally with good food and beautiful music, while the dramatic also happens to happen. Of course, this is only one artist’s vision, so this series will continue on with more recent arthouse cinema, and at some point, also commercial cinema, often neglected by critics on the already foolhardy quest to see a country reflected in its films.

This Small Country Big Cinema: Vietnam article was published in May 2020