For Dear Life: The Summit of the Gods 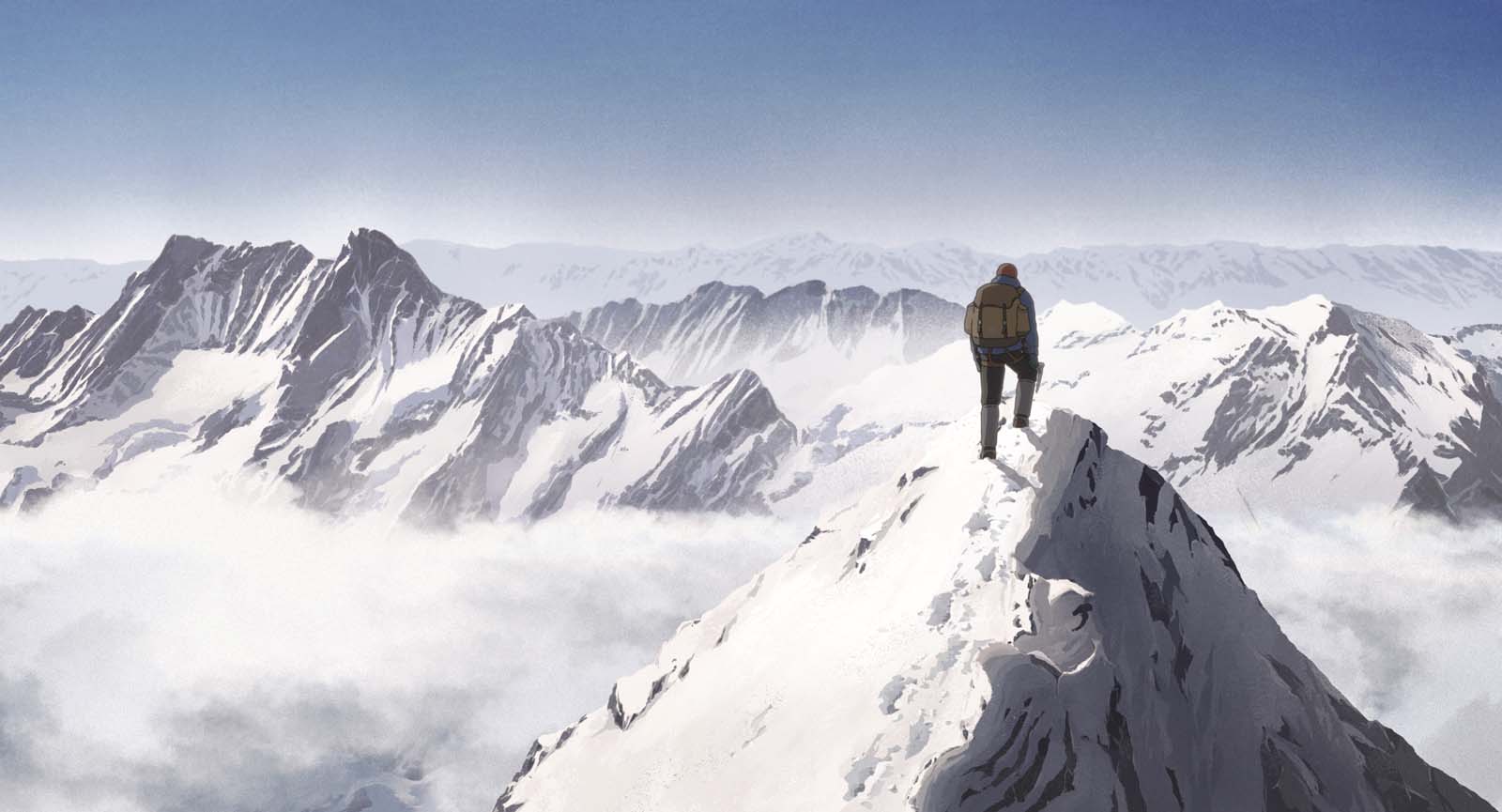 I first came across the saga Summit of the Gods in the French translation of the Japanese manga, written and illustrated by Taniguchi Jiro. This five-volume manga has been so successful that it has been translated into several different European languages, and its fame has only increased since Taniguchi’s death in 2017. Taniguchi’s story was based on a 1998 novel by another Japanese writer, Yumemakura Baku. The spell-binding story follows the mountaineer-photographer Fukamachi on his quest to find the camera of British climber George Mallory. Mallory died on the North Face of Mount Everest in Tibet in 1924, and his body was never recovered. As a New Zealander, the idea that anyone first made the assent other than our beloved Sir Edmund Hillary, along with Nepali-Indian Sherpa mountaineer Tenzing Norzay, is rather irksome. But this doesn’t make the story any less wonderful. If anything, it adds a little zest to the experience.

A co-production between France and Luxembourg has turned these five volumes into a comfortable yet immersive 90 minute animated film. Though it’s relatively brief, the feeling upon exiting the cinema is that of having just lived several lives. Made in 2D animation, every frame is impressive in both detail and scope. The French animators have clearly been influenced by such Japanese craft workers as those from Studio Ghibli, whose Spirited Away (2001) and Howl’s Moving Castle (2004) are widely known in Europe. One of the bar scenes in Japan, in which a crackling fire is featured, reminded me so much of the fire in Howl’s Moving Castle that I kept expecting a little spirit to jump out of it and start giggling (as happens in that film). There are no spirits in this The Summit of the Gods (2021), only insane climbers, but the animation is so divine that every scene feels alive.

Photographer and reporter, Fukamachi believes that a camera he glimpsed ever so briefly may help to find out whether Mallory was indeed the first person ever to reach the top of Mount Everest. This is how the stirring and sometimes alarming tale of Fukamachi and his exploration into the history of climbing begins. In his quest to find out the truth about the history of Everest, Fukamachi takes us with him through the dark taverns of Japan, to the mountain villages of Nepal and then right up into those mountains. Along the way, he carves out a history of important climbing milestones reached by Japanese climbers, some of which are based on true stories.

Emotion is portrayed especially well in this film. The frustration and fear of the main climber in the story, Jôji Habu, are portrayed mostly through subtle turns of the head or moments of distraction. While the reporter is still in Japan, a constant theme is the above-ground subway passing, and this is used to express time in a beautiful and unexpected way. The juxtaposition between the tall buildings in bustling Tokyo and the snowy and bucolic Mount Everest may even make one see buildings in a new light. The portrayal of past and then present is also differentiated with aplomb. Never before while watching animation has it seemed so clear to me that one thing was in the past and another in the present – I have to admit here that I haven’t watched that much animation. But the scenes featuring Jôji Habu’s youth immerse us in a different time, as in a fiction film we may see the difference between the 80s and the 2020s. Nature itself is portrayed with its slightest fluctuations: the sunlight on the mountains in the morning, the snow falling softly on the ground, the crumbling rock-face…

In the mountains in Nepal, the animation is used to its full extent to describe the inevitable headaches experienced by those climbers without oxygen tanks. They appear as vivid red slashes of colour across the screen and are accompanied by jolting noises that hold the audience in their sway. The original music is made by up-and-coming French-Tunisian artist Amine Bouhafa, who also made the soundtrack for this year’s arthouse hit The Man who Sold his Skin (2020). It strikes just the right tone between mystery and drama.

The Summit of the Gods is the ultimate adventure film, and it enthrals even the least sporty among us. When the characters slip, or drop a piton (that metal spike hammered into the wall to act as an anchor for the climber), we gasp as they do, watching it tumbling into oblivion with a fearful moan. This emphasis on the folly of risking one’s life just to be “first” is cunningly wound into the storyline, though the answers to this hovering question mark are never more forthcoming than an oft repeated line: “I can’t say why”. But while this drive to be the best propels the film forward, the way the film delves into male friendship is really what gets it to the top of the mountain.

This Essay article was published in October 2021