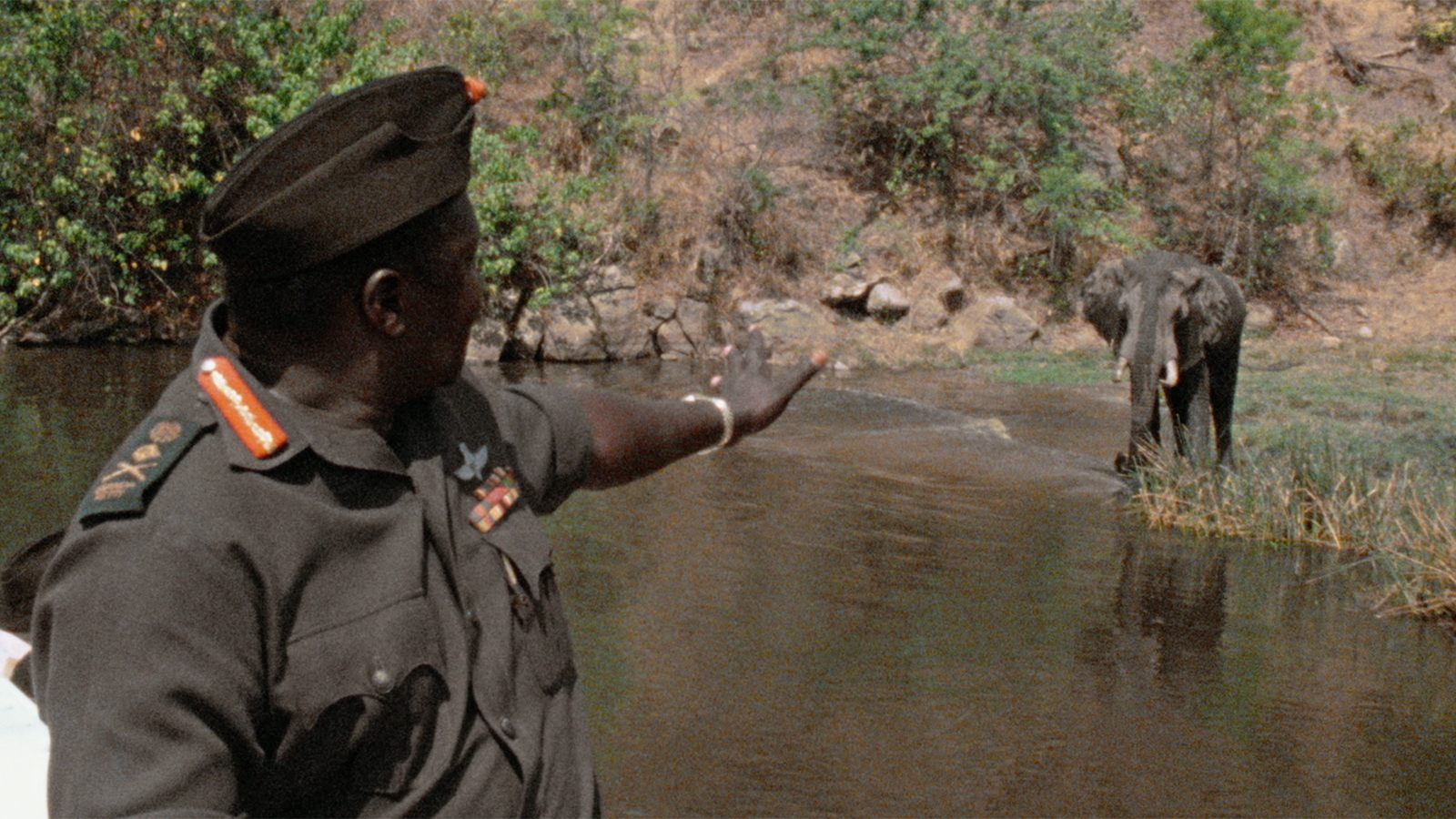 Dictators come in all shapes and sizes in 2017, at the 30th edition of the International Documentary Film Festival Amsterdam. The legacy of Joseph Stalin on present day Russia is examined in the new documentary The Red Soul (2017), by Dutch director Jessica Gorter, which I sadly had to miss due to illness one night. Meanwhile, the classic General Idi Amin: A Self Portrait (1974) by Barbet Schroeder is shown as part of The Visual Voice, a program in which directors selected their favorite documentaries. General Idi Amin: A Self Portrait was selected by Australian director Hubert Sauper. The loyal subject of another sort of dictator receives the spotlight in Filmworker, a portrait of Leon Vitali, who dedicated his entire life to the service of one Stanley Kubrick.

General Idi Amin: A Self Portraitby French director Barbet Schroeder was originally supposed to be a propaganda piece celebrating Uganda’s then dictator, Idi Amin. Schroeder delivered an hour long version to the general and his regime, to be shown in Uganda, but released an hour and a half long version with added commentary internationally. It is this version that was shown at the 30th edition of IDFA. This version hasn’t always been available, because after agents of Amin saw it in England and reported back to Amin about this, he had 200 French nationals living in Uganda taken hostage, demanding that Schroeder cut his film. Schroeder did what Idi Amin demanded, and only re-released his intended version after the fall of Idi Amin’s regime in 1979.

Even the version with the cuts, the version that the dictator approved of, can’t have been a very good propaganda piece. The vain Idi Amin orates about his great deeds and what Uganda will be, but his lack of clear vision or logic and bizarre ideology make it hard to believe his boasts. He sent a letter to ‘his dear brother’ Richard Nixon, telling him he hopes ‘the little Watergate thing’ will go away soon. He also sent a letter to dictator Pinochet, congratulating him on his violent military coup in Chile in 1973. General Idi Amin took over power after a military coup in 1971, but already firmly believes in his own propaganda as a big player on the international stage.

A meeting of ministers is nothing more than Idi Amin ranting on and on. During this, he boasts of how Uganda is the most progressive country in African when it comes to women, because since the women’s place is the home, her skills as housewive are transferable to managing hotels and that is why women are now allowed to become hotel managers. We have many female hotel managers in Uganda, more than anywhere, Amin boasts. How many, he asks the room. Four is the answer. Just four. Then the scene becomes chilling, thanks to Schroeder’s voice-over commentary in which he says that the Minister of Foreign Affairs who is scolded during this same meeting, was found murdered in a river only weeks later.

So not only does Amin himself, and the staged scenes in which he is praised and loved, and in which Uganda’s “military might” is demonstrated, already undercut the intended propoganda, Schroeder’s narration makes even clearer the lunacy and brutality of Idi Amin’s regime. Resulting in a timeless portrait of Idi Amin and his regime, that is at times hilarious but mostly very disturbing and which deserves to be shown again and again to undermine the power of any of his ilk. Idi Amin’s attempt to secure his legacy through film ends up backfiring completely.

A dictator who’s legacy is secured through film is none other than Stanley Kubrick. His reputation for on set tyranny is legendary, but in the end his movies have made him one of the most beloved and admired of film directors. And we have Leon Vitali to thank for securing that legacy, as much almost as Kubrick’s work itself. Who is Leon Vitali? Filmworker by Tony Zierra answers that question.

In the early 1970s, Leon Vitali was an up and coming British actor poised for the big time. He got his big break in 1975 by playing Lord Bullingdon in Stanley Kubrick’s Barry Lyndon. Rather than capitalizing on his success as an actor, however, he was so fascinated by the production of the film, all in service of the vision of one man, that he decided to be a part of that. Leon Vitali became a ‘filmworker’, doing everything he possibly could during preproduction, production and postproduction of all of Kubrick’s films since then to execute his master’s vision. From casting Danny Lloyd in The Shining (1980) and guiding the boy through the shoot to viewing one in five of each print of Eyes Wide Shut (1999) to make sure every print was color-graded correctly and in the right aspect ration.

Being anything and everything to Kubrick during the last twenty years of his career it also meant he often became the person in the firing line between Kubrick and the studio’s he dealt with, and the first in line to receive angry rants from Kubrick. Given the insane amount of work he does in service of the man, it’s often remarked in the film he works about 24 hours for Kubrick, even including housework to clean up Kubrick’s mansion, to the detriment of his own health. Some of the people interviewed just marvel at Vitali’s dedication, others feel he was exploited by the director, who fully accepts and demands Vitali dedicating his life to Kubrick’s work.At one point Vitali’s three kids appear in the film, lamenting how the work always came ahead of them. What’s more disturbing is how these kids are never mentioned before in the film, and there is no mention of any mother. For Vitali, there’s only Kubrick.

Even after Kubrick’s death Vitali is still ruled by his master, starting with the release of Eyes Wide Shut and then later consulting on DVD-releases and remasters, again making sure they look exactly as Kubrick intended them, or as close as possible. Kubrick was a dictator on the set, and even more so of this one man, whom he holds in his thrall decades after dying. And Vitali is happy about it. Filmworker is a tribute to his hard work and enormous personal sacrifice in service of the vision of someone he deemed greater than himself, but also the tragedy of exactly that.