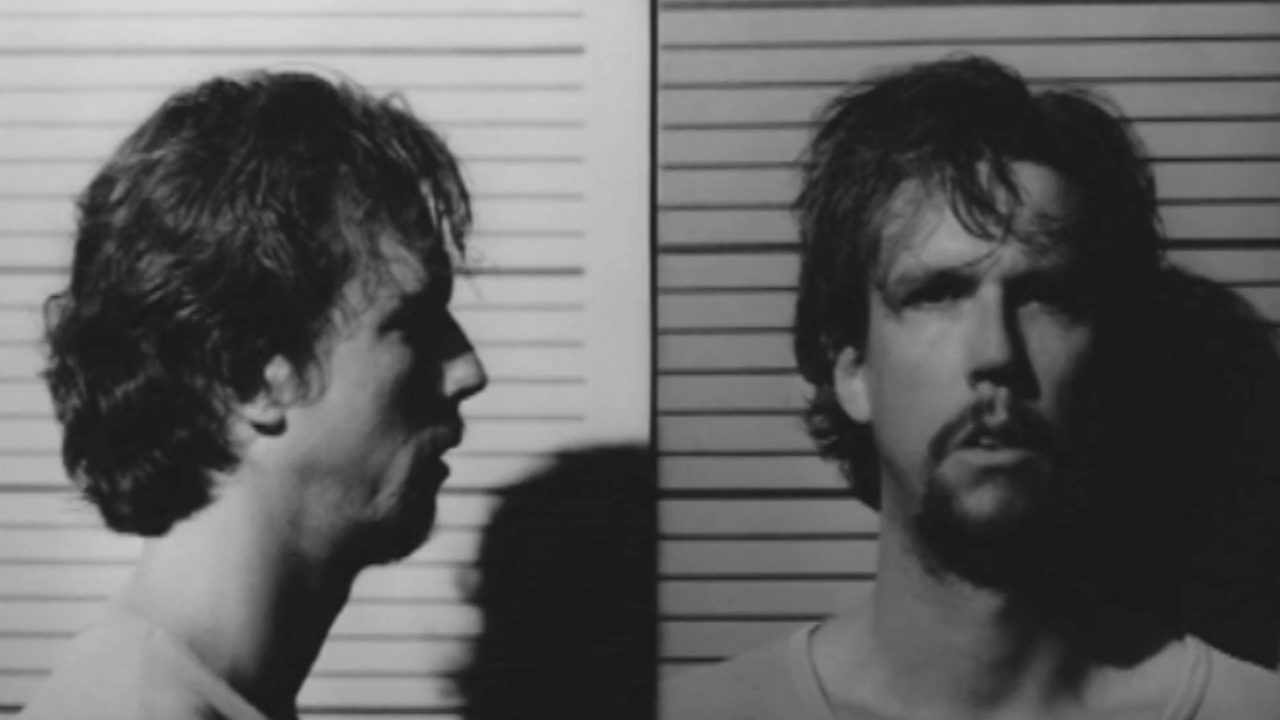 In Frameup (1993) a Bonnie & Clyde couple deadpans their way to a tragic conclusion without ever becoming caricatures. This forceful satire fuses disenchantment with innocence and delivers poignant observations in passing.

This isn’t the first time filmmaker Jon Jost (famed for among others Last Chance for a Slow Dance, 1977) follows a couple on the run from nowhere in particular on to a fateful conclusion. In Slow Moves (1983) he stayed down to earth, keenly moving along with the oscillations of the depicted romance. In Frameup, on the other hand, the dense couple in the lead satirise the American Dream. Ex-convict Ricky initially starts a relationship with the naive waitress Beth just for physical pleasure, before claiming he has fallen head over heels. She agrees to travel around in stolen cars with him perhaps hoping to reenact the cheap romance novels she’s addicted to, even though the road seems to lead nowhere.

Jost often shows a dark side to the optimistic ideals of the United States and Frameup is no exception. A wry disillusionment permeates throughout. Whether it’s a map of the routes undertaken getting buried stop motion in paraphernalia or the couple driving aimlessly through the night, the attitudes of Ricky and Beth get juxtaposed in droll voice-overs. Beth dreams of their grand escape from the fetters of daily life akin to the cheap romance novels she’s addicted to while Ricky reminisces about previous hook-ups and their physical performance with acerbic banter. They’re both trapped in the humdrum landscapes Jost shows along the way without them realising the artificiality of it all, including their dreams.

This satire launches its assault with a stylistic fervour (Jost shoots and edits his films as well) that reminds at times of the Jean-Luc Godard from essay films like Je vous salue, Marie (1985). The script divides the couple’s voyage in twelve moments which even include some documentary segues with bystanders reflecting on the events. Each moment stands on its own, such as two Ricky’s talking through each other in split screen during a mesmerising character introduction. All variations on a sardonic theme with a scintillating first meeting told in a business-like voice-over dialogue while a pair of male hands pours milk and sugar into a coffee cup. Another idiosyncratic moment tells of the mundane towns on their way with an ever shifting assembly of photographs and smouldering cigarettes in ashtrays set over a moving map. Those gyrating crumbled cigarette packs evoke the grit of a vagrancy leading to hopeless conclusions.

An intense alienation prevails in a world where the only thing that seems to bind people is desperation about the phoniness of people and places. Such a collapse of a grand story to make sense of the world often has been welcomed with a cynical wit. For instance, David Lynch revels in gaudy sensationalism with a couple on the run in Wild at Heart (1990) hinging on Nicolas Cage’s demons and Quentin Tarantino snickers into the void dug by incessant popular culture references. Yet as harshly as Jost probes into the disenchantment of its characters and their surroundings with a black comedic touch, he connects this to a philosophically minded innocence.

Ricky stays in the zone of cynical wit with a strident monologue on the evils of money (but they still need it), his boorish demeanour played dryly by Howard Swain. Nancy Carlin as Beth on the other hand astonishes with moving observations on tiny lives in the sand told while the waves roll endlessly. In her brilliant delivery, the same deadpan monotony makes for both highly comic and gentle effects turning the end of her saga with Ricky truly tragic and transcendent. When the ‘big nada’ arrives in the coda she slowly fades away over a background of sand grains uttering stoic wisdom. Someone who pined away on romance novels doesn’t get berated or sensationalised in Frameup but offers a poignant perspective on death. Thanks to Beth this film doesn’t collapse into cynicism just because dreams turned out to be fake.

This Essay article was published in June 2021