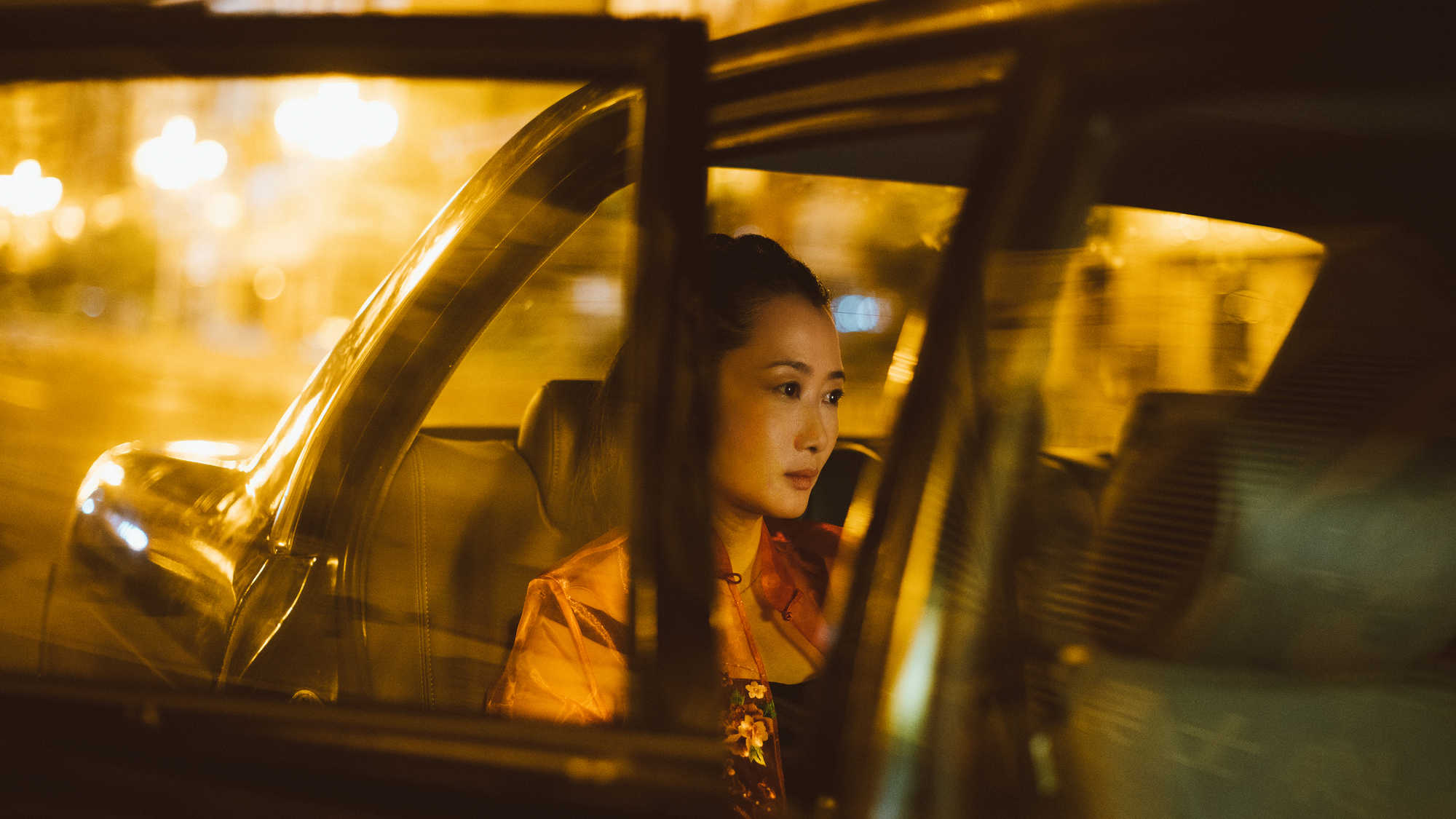 Right before Christmas, we take a look back at some of our favourite scenes, sequences and cinematic moments of 2018, containing absurdism, surrealism, songs, montages and many, many meaningful facial expressions from all over the world and beyond.

After a brief prologue of unused footage from his 2001 film Unknown Pleasures, Jia Zhangke’s Ash is Purest White begins with a floating drone shot of a cityscape. Rising drumbeats mark the beginning of the familiar Wong Fei-hung theme song as Jia cuts inside to a packed and noisy gambling den. The camera follows Zhao Tao from behind as she slinks her way through the crowd, and just as the martial theme kicks into gear, an unknown extra shouts her character’s name and she whips her head around, fixing her interlocutor with a stare and the barest hint of a smile, sly and commanding, the coolest person in the world. In many ways the film, loosely structured after the plot of A Better Tomorrow (1986), is a travelogue through the last 17 years of Jia and Zhao’s work. The movie becomes more diffuse as it moves along, as its early gangster setting gives way to the scrappy realism of their sojourn on the Yangtze in Still Life (2006), ending up in a more diffuse, and therefore unsettling present. But through it all, Zhao remains at the centre. We watch her through her husband’s eyes and every once in a while, thrillingly, she looks back.

“You’re awesome. You rule. You’re great,” Olivia tells Kayla while getting out of the car. She hops out, leaving the 13-year-old with Riley, a mutual friend she doesn’t really know.

The two make small talk as he drives her home. Kayla gushes about how nice Olivia is; he brags about knowing Olivia for years. He even flatters Kayla with too-good-to-be-true words: “You’re the coolest freshman I know and you’re not even a freshman yet.” And suddenly she isn’t lonely. She finally belongs.

Then he pulls over. He gets in the back seat, tells her it’s okay, and starts a game of truth or dare. He asks how far she’s gone and she doesn’t know what to say, but the answers spill from her like water from a balloon.

She obviously doesn’t know what’s happening and he likes that. She doesn’t know that she doesn’t like it—she’s never known it before at all. Most of all, though, she thinks she can’t say “no” because she’ll get rejected in some way, shape, or form. She’s naïve and has voiced her anxiety, but one thing leads to five others. Now his shirt is off, and as he touches her, she finally yells at him to stop.

Now he’s back in the driver’s seat, scoffing. He victimizes himself, guilts her, and makes her into a fool. Even though “no” is the default answer—even though it’s the default unless someone explicitly says “yes”—this is just one reason victims are scared to speak up.

“It was just… it was a lot at once, you know?” Kayla mumbles.

Making science-fiction and fantasy comes with a built-in hurdle: how much or how little do you tell your audience? If the film is a puzzle, the reveal of each piece is an easy strategy for exposition. But what about High Life? Claire Denis’ cinema is frequently presented as a temporal game, laying out faces, events, and landscapes for our brain to put in place after the fact. But it’s never really mattered what was happening. That’s not what you should come to her cinema for. What matters is that it is happening and we get to experience her telling, one of the most sensuous of any filmmaker living or dead. So when she shows us images of life in space, the question isn’t how did they get there. Unfortunately, Robert Pattinson’s face on the poster means many folks are going to ask for a why, so she gives it, in one of the most striking montages of her career. Dirty orphaned faces peering out from the back of a moving train, a Tarkovskyan reverie of life in a time before now. Denis’ past is a collectively imagined time, of urchins and train-hoppers, of intellectuals sitting in the front of that same locomotive discussing the philosophical implications of sending prisoners to space. For a minute Denis engineers an unmoving, eternally antique vision of us, humans, right now, yesterday and forever, while the unlucky forgotten fly towards the end of the universe. Here’s what they left behind: an image that will never go forward, never age, and never improve.

Pariyerum Perumal is one of several great Tamil films this year to explore and challenge the caste system of India. Although officially abolished and discrimination based on caste is prohibited in the Constitution of India (ratified in 1949), it is still pervasive and widespread in the hearts and minds of many people. Pariyerum Perumal shows how damaging the caste system can still be to those at the bottom of it, and what the constant prejudice, humiliation and the threat of physical, even murderous violence does to the soul.

The latter is conveyed wonderfully in the song sequence ‘Naan Yaar’, which roughly translates to ‘who am I?’ The song and its accompanying surrealist imagery (a stylistic break within the film) express the title character’s self-doubt, impotent rage and frustration caused by a life long of being beaten and treated as worthless. His dog, killed in the opening sequence to ‘teach him and his friends a lesson’, features prominently as if come to life to remind him of the many injustices he’s had to endure. Sometimes the dog is painted blue, and then Pariyerum himself turns blue (blue being the colour of Dalit resistance), after literally breaking free from chains and what appears to be some sort of underground chamber.

But even in this surrealist fantasy sequence, Pariyerum can’t reach Jo, the young woman whose family has brutally beaten him for them falling in love. Because even if he breaks free from the bonds of the caste system and stands up to its violence, he needs a mentality change from those prejudiced against him for their love to flower and for him to feel like a full member of society.

Naomi Kawase’s Radiance contains so many scenes that are worth mentioning, but for me, one scene in particular made me catch my breath. Audio description writer Misako and Masaya, a photographer who can’t accept that he is losing his sight, sit on the underground. We are shown Masaya’s perspective: there’s only one last spot left in his vision, through which he can see. It becomes smaller and smaller, and then disappears. Masaya looks desolate and afraid.

Sad music starts, the man’s eyes are shot in close-up. Tears come into his eyes. He searches for Osaka’s hand and holds it tight. “I can’t see.” he says, still a little bit in disbelieve. Nothing remains of the stubborn Masaya. All that is left is an insecure man who is scared to death, knowing that his life as a photographer is over.

The scene ends with a shot of the train’s mirror that reflects Osaka and Masaya. It slowly turns into a light yellow screen: the only view he will see to rest of his life.

Sometimes the best moments are entirely coincidental. That goes for life as well as the movies. Lucrecia Martel worked for years on this period drama about a corregidor that gets stuck in a remote South American colony. It’s a film with notes of Samuel Beckett’s Waiting for Godot and so when Don Diego de Zama is talking to an official, pleading his case to be transferred, and suddenly a lama walks into the room, it feels like just another of these weird, absurdist moments that are scattered throughout the film. The lama saunters behind Zama, stands there for a moment, and then walks out again. It’s as if he’s commenting on Zama’s situation, mocking him. None of the characters react to the lama, which almost makes it seem like an apparition. In an interview, Martel confessed that the lama wasn’t supposed to be there. She explained that all kinds of animals roamed the film set. And while they were filming this particular scene, the lama just strode in, and luckily the actors didn’t flinch, allowing for this wonderful coincidence to become a perfect moment in the movie.

Lee Chang-Dong‘s Burning (2018) centres around a love triangle and a meandering mystery that serves as a vehicle to reflect on modern millennial life. We meet the rich bored playboy Ben, the beautiful girl Hae-mi and the somewhat introvert protagonist Jong-su. They are more or less stuck in their own little worlds, and seem to strive for something they don’t know but feel that they lack something. An unspoken ‘burning’ desire for meaning, love, purpose or perhaps plain happiness in modern day South Korea. The key scene of the film, where Hae-mi dances topless and stoned in the sunset in front of the two men, feels like the one moment the three have been longing for. Hae-mi previously explained to Jong-su the significance of this dance to her. She refers to it as ‘the Great Hunger’ which can be translated as her lust for life. She starts a beautifully choreographed dance and is perfectly followed by the camera under just enough light from the sunset, accompanied by Miles Davis’ Generique. The scene makes you understand her feeling of freedom and happiness but also demonstrates her beauty. Beauty that makes her spectators love her and the perfect moment, both in the scene and in the movie theatre. After she finishes her dance Hae-mi is crying because she is happy but it also turns out that this is almost the last we see of her before she vanishes from the film.