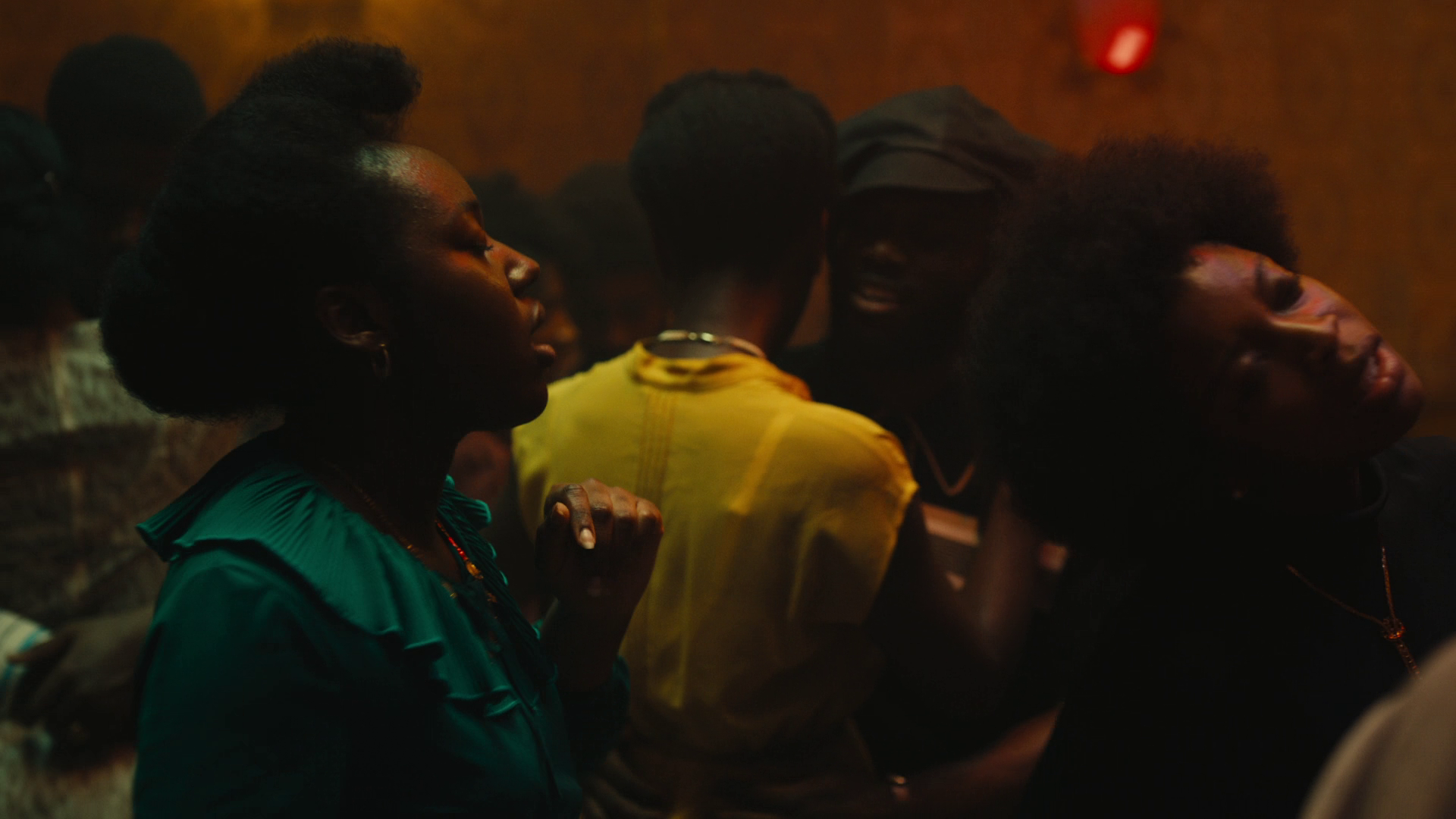 The year was not a good one in many ways, during which most of us experienced stress, hurt, loss, fear and confusion. But throughout, cinema still meant the world to us, because of moments like the ones below. Moments that blew us away, scared us, amazed us, reflected us and/or lifted us up, from all around the world and all around the year.

There have been lots of little (and now, unfortunately, some very big) “quarantine” films. They’re at best cute, even if very obvious in their sentiments. However, one image from Jia Zhangke’s COVID-short Visit has stuck with me since I first saw it back in April. At the end of the film, Zhangke and a colleague are watching what appears to be very old footage of a massive crowd, swaying in waves from forces uncontrollable to them. The sounds of surf crashing overlays this deep sea of people. It’s in some ways the most terrifying thing to see this year: a bunched crowd of hundreds, maybe thousands of people without masks, completely unaware of the danger they could present to each other, or at least, that’s how we’ve been trained this year to see such an image. That crowd is also a deep yearning, a violent nostalgia for a time when we could all be together, riding the waves of life without fear, simply being together. In some ways, it’s the most beautiful thing I could imagine right now.

As someone constantly battling and resisting ideas of ‘cinematic’ TV shows (or streaming series, since most of them are no longer broadcast in the traditional TV sense), I was blindsided by the appearance of a new HBO series: How To with John Wilson. In Wilson’s investigations of everyday people with ordinary problems, each of the mere six episodes contains multiple stellar and often unforgettable moments. In the third episode, “How to Improve Your Memory”, our narrator practices an exercise taught to him by a memory expert: create a room or path in your mind and fill it with objects which act as reminders of all the items you want to remember. So Wilson tries it with his grocery list, and it is with this simple premise that the show’s consistent montage tactic of ironically pairing image to word reaches new heights. As Wilson mentions acne cream, he subjects us to a car tire obliterating a jelly-filled doughnut. A few items later we see a coffin carried through the street, connected verbally to a “uh… Snickers bar.”

Before starting the series, I had watched a couple of Wilson’s short films on Vimeo, such as How to Live with Regret, but it wasn’t until after I had finished the series that I went back to watch what quickly became a personal favorite, The Spiritual Life of Wholesale Goods. It was here that I encountered the single image from Wilson’s oeuvre which left the strongest impression in my memory: “The Perfect Employee”.

Although it is very easy for a cat to become the centre of attention, the cat scene in The Woman Who Ran is not just comic relief or a crowd-pleaser. The film is structured around shifts of perspectives following the flow of conversations between a young woman, Gimhee, and three of her long time female acquaintances. Gimhee gets a glimpse of their daily lives and interactions with neighbours: all of them male, framed standing back to the camera. Gender relations are a big topic in all Hong Sang-soo’s films, but what is truly special about The Woman Who Ran is how it includes the perspective of an animal. The scene starts with an argument between neighbours over feeding stray cats: a man self-righteously tries to persuade the woman to stop doing it, while she just plainly refuses his makeshift logic and prejudices. The excruciatingly polite tone of the argument hides a deadly amount of everyday violence. He calls the felines “robbers” while for her they are like her own children. After the argument comes to an inconclusive end and people leave the frame, the camera zooms in on the cat that was sitting nearby for the whole time. In The Woman Who Ran such camera movements are fully attuned to the character’s speaking, thus by focusing on the cat, it acknowledges the animal’s agency and creates the space for his or hers unrestrained self-expression and communicating with the audience. The cat yawns and stares back at us. Cut.

Watching Elem Klimov’s heralded anti-war film Come and See in its new restoration via the Criterion Collection Blu-Ray was astonishing as a horrifying but ultimately cathartic cinematic experience. The catharsis comes from one of the most stunning sequences I’ve ever seen in cinema – the montage of the young Flyora pointing his rifle at a portrait of Adolph Hitler and shooting multiple times, intercut with reverse-chronological sequences of his rise to power. It’s a moment towards the end of the movie that signifies the boiling anger and helplessness he collapses under through his harrowing experience in the film. As he gets closer and closer to the source of the problem, he sees a picture of a baby Hitler sitting on his mother’s lap. The juxtaposition of this with the beginning of the film, where a naïve Flyora waltzes away to war thinking it will be fun, while his mother cries and screams for the soldiers to return him to her, is where it hits hardest. Flyora points the gun at the child image of Hitler he imagines, and a tear falls down his face. Is this is the inevitable conclusion of every war? The music, the editing, the camera cutting in and away from Flyora’s devastating aghast face all come together to provide a sequence that speaks to the ultimate conundrum of war – how much we allow the line between our vengeance and our conscience to get erased.

Moving On gives a humorous glimpse into the small trials and tribulations of a South-Korean family’s daily life, during a time when they’re forced to live together after a period of alienation. Often told from the perspective of a sister and her younger brother and father who move in with their estranged grandfather, ostensibly to take care of the ailing elder, but financial troubles play a role too. After their aunt in marital crisis seeks refuge as well the situation complicates further. Debuting director Yoon Dan-bi observes the rougher patches and patching up of familial relations with quiet distinction.

In casually composed tableau’s the character frolic to and fro each other with gestures both irritated and teasing. Although Moving On doesn’t eschew misfortune it remains good-natured throughout. In one of the film’s brighter moments of surveillance the father fools his son out of bed early, a kind of comic touch that echoes Yasujiro Ozu’s most cheerful film Good Morning (1959). Dan-bi shares Ozu’s penchant for tranquil musing on the incessantly changing quality of life. Yet here this takes the topsy-turvy form of a traditional extended family in an individualized world for an invigorating take on generational differences.

Georgis Grigorakis’ debut film is presented as a contemporary western about a native farmer, who lives alone in a farmhouse situated in a mountain forest in Northern Greece. For years now, he has been fighting with an industrial monster digging up the forest, that threatens both the beautiful nature and his own property. One day, his son suddenly appears after a separation of twenty years. Instead of a warm reunion, their encounter turns into a fight between father and son. However, when it comes to a matter of life and death, the son forgives his father and rescues him out of quicksand – with a little help of his father’s worst enemy: a digging machine. This surprising and overwhelming scene is full of excitement, love and forgiveness, aspects that are lacking in the rest of the film. Moreover, it depicts that it is possible to forgive and care about the people you hate the most, especially when it comes to your relatives. A heart-warming message that is most welcome these days.

Al Capone’s mid-film nightmare in Capone. Not simply a gorgeous little sequence that plays with tropes, a character in terror of images and memories (you can almost feel him pissing himself) running through this wax museum of murder and money. It was also a feeling of being relieved that a filmmaker I trusted was as smart and capable as I hoped.  I’ve said elsewhere it’s like Josh Trank turned the AFI top 100 into the Overlook Hotel, but it’s less glib to say that he’s taken a romantic icon (and a stand-in for the charming American criminal ideal that dead-ended with a President of the United States who came from real estate schemes and bullying lawsuits and arrived festering like the Baron Harkonnen without the street/space smarts) and drained the romance out of him like he was emptying a cyst.

This sequence may have already been lauded plenty these past few weeks, at least in cinephile circles. But ever since seeing it in November I haven’t been able to shake Steve McQueen’s Lovers Rock from my system. Much less so the scene that I (and many others) view as the zenith of the film (and McQueen’s career), during which the characters in the film dance to Janet Kay’s Silly Games. People on the dance floor start singing along to the song, seemingly spontaneous. Some even hit the high notes in the chorus. In the meantime, the two main characters fall in love, or at least lust. And then the DJ fades out the song, but people still keep singing the song. And this goes on for some time. It’s the kind of magical musical moment that always pushes my buttons, and this one did so very much. I find it hard to describe exactly why, but I can still feel the goosebumps. This moment is so full of joy, full of love for music, love for life, and living. My only regret is that this only happened on my TV, and I will never experience this in a cinema. Steve McQueen has said in interviews that though he encouraged singing along in general during filming, this particular instance happened more or less improvised by the cast. Though the cameo by Dennis Bovell, who sings and dances along, the original writer of the song, can’t have been accidental.