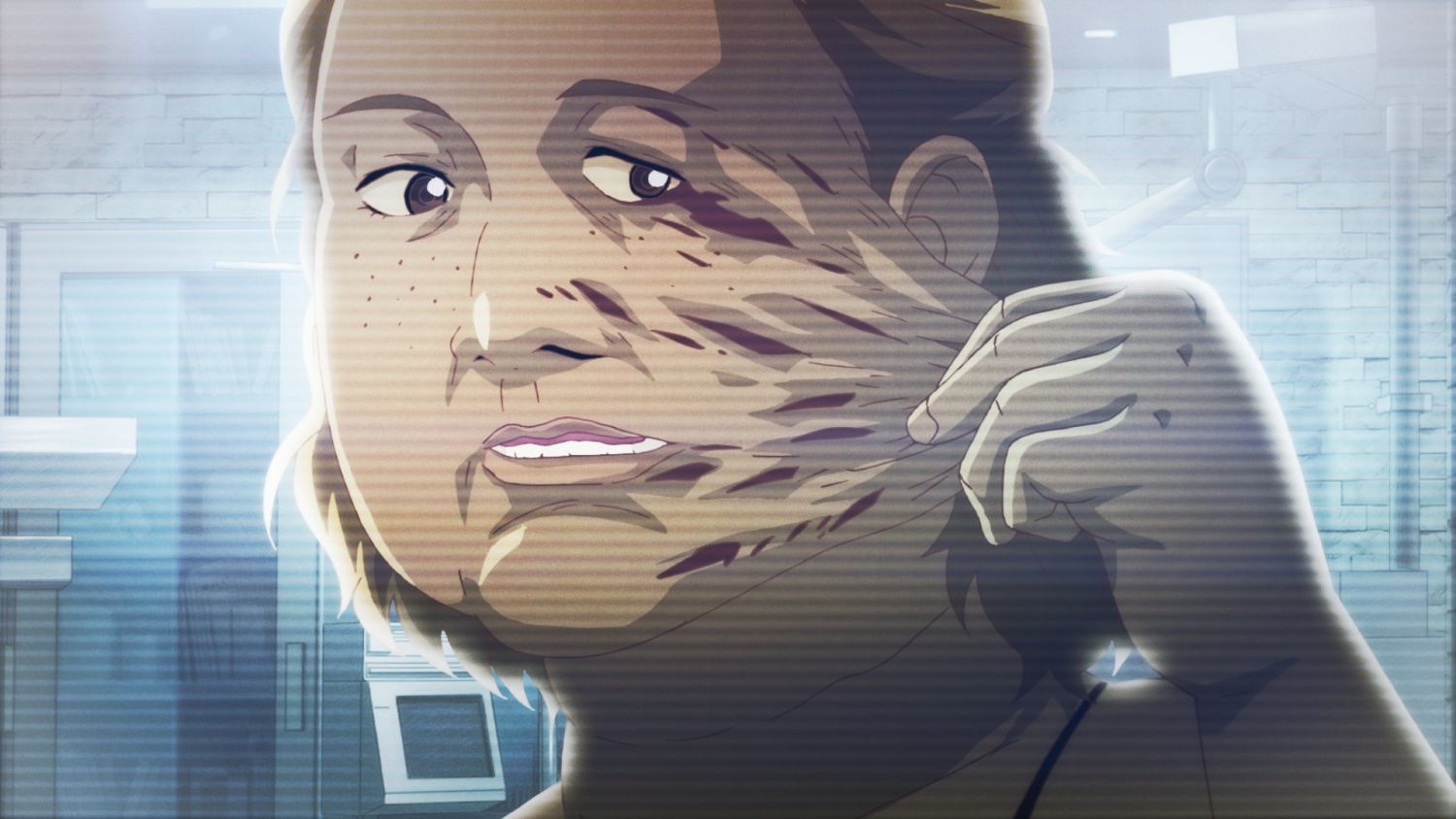 2020 will always be the year of the Covid-19 pandemic, and so for cinephiles the year that cinemas closed, for extended periods around the world. Increasingly, many films were released digitally on some platform or other, instead of in cinemas. The same happened to many a festival. Although this sometimes made films much more accessible around the world in a more timely fashion, it also made it much harder to keep track of what films were watchable where and when. So here we present a few films that stood out to us, but might’ve gotten lost in the existential shuffle of 2020.

The Killing of Two Lovers (2020) is Robert Machoian’s sparse and intriguing dissection of a family falling apart. Or more specifically: a man falling apart. In beautiful long takes (in which Machoian’s background in photography shines through) the film follows David, walking his kids to school while making terrible jokes, driving around in his truck, talking to his wife Niki. The two mutually agreed on taking a break in their relationship, but while liberating for her, for him it feels as though he’s losing his grip on everything. He sees Niki drifting away from him, the bond with his kids crumbling around the edges, especially with his teenage daughter, who sees more than she understands. Or maybe it’s the other way around.

Rather than trying to capture both the parents’ perspectives, Machoian one-sidedly chooses David’s perspective, and then scrutinises that perspective. David is a man not easily trapped by any definition of masculinity. There is a tenderness and eloquence to him, but also a wonky and potentially dangerous edge, a hint of relentlessness that the film doesn’t shy away from. Voiced in the clanking and scraping noises on the soundtrack, emanating the tension building up in David’s head. The question is not whether or not David is losing grip on his family, but why he feels the need to have that grip in the first place. And whether he is capable of giving them (specifically the two females of the family) the agency they demand.

I have already written about Alaa Eddine Aljem’s The Unknown Saint (2019) earlier this year for Frameland while covering the New African Film Festival. Instead of rehashing my thoughts, I’ll use this opportunity to mention this: The Unknown Saint was the last film I saw in theatres before the pandemic shut everything down and was one of the few uniquely joyous moments of cinema that 2020 had to offer. Aljem’s film is about reconciling with the loss of place and people and finding hope in a new reality. Throughout the film we see several interlinked storylines – about a petty thief trying to retrieve buried cash under a sacred temple, a degreed doctor reassigned to a rural village where nobody believes in modern medicine, and a father and son who argue over trying to salvage their dying crop or selling their farm and moving. Each story, told in a tragicomic manner, gives a hilarious but sobering lesson on what it means to re-find what you feel is missing. Shot in the Moroccan desert, the movie’s open barren canvas gives a feeling of both isolation and immobility. Yet, every character finds a purpose within its narrative either through perseverance or catastrophic failure. As we look towards 2021, we have to come to terms with where we want our lives to go after this terrible year. We will all have our own ways of dealing with tragedy and the damage left in the wake of the virus, but it must result in gaining self-worth and purpose. Aljem’s wonderful gem of a movie chooses to go through this process with a wry smile and a gentle shrug and keeps pushing on.

You can fucking thank Quibi for dropping the ball on Mary Harron’s new movie, her only no-shit horror movie (gone is the ironic distance of the wonderful American Psycho (2000), and the soft romantic gaze of YA adaptation The Moth Diaries (2011)). We get an honest to god scare machine, something sharp and ferocious and unafraid of playing by and breaking rules in the name of transporting Harron’s audience. Though it hinges on the grotesque it has a perspective only a mother in the director’s chair could provide. (Molly Haskell enjoyed it!) Excellent, elegant stuff.

Marona is Anca Damian’s animation debut that tells the story of a dog called Marona. One day, Marona is hit by a car. She sees her life passing by. In a colourful mix of different styles of animation (from raw to childish, aquarelle to pencil drawings) we see how the life of this animal developed. How Marona got a new name every time she was adopted by a new person, how she had to show that she is actually a bitch, not a dog, repeatedly and how she had to fulfil the role of friend, family member or a great support. In this way, Marona says more about human beings, and confronts them by showing how they deal with pets, than about the dog herself. The human characters in Damian’s film seems to look like figures from Picasso’s paintings. The animation is dynamic and sometimes even magical, which contrasts with Marona’s adventurous but also slightly horrible dog’s life.

Korean animation seems to be having some problems riding the Korean Wave. Even Yeon Sang-ho’s work got into mainstream culture only with his first live action film, Train to Busan (2016), that overshadowed his animated masterpieces: The King of Pigs (2011), The Fake (2013) and Seoul Station (2016). Maybe the reason behind Korean animation’s failure is that some of its best titles are horror films? Tuakana Metuarau explored the question of animated horror extensively, and many of these issues also relate to one of this year’s underseen gems. Beauty Water came into the world via different means than a full-length auteur project. It is based on a webtoon series, Tales of the Unusual, which unexpectedly became a huge hit in China. Directed by debuting Cho Kyung-hun, the film toured the festival circuit for a while and was theatrically released in South Korea, Singapore, and Hong Kong, but the buzz around the title remained minor. Beauty Water has an undeniable charm of cautionary social critique mixed with trashiness and camp; the atmosphere comes very close to the one in cult Tales from the Crypt. Korean urban legends are full of horrifying accounts of homemade beauty treatments gone wrong and Beauty Water does echo the famous story of cosmetic seeds. However, the unique aspect of this animated body horror lies not only in its timely topic, but also in the reflection of traditional Confucian thought according to which all body modifications are viewed as an insult towards one’s parents who gave the body to the child. In Beauty Water this idea takes a grim twist when the sacrifice of the flesh is repeated in the most gruesome way. The ending is hilarious as much as it is terrifying, and it guarantees that after watching the film nobody will look at one’s knee in the way as before.

With calmness Sirena dissects the differences in mode of living between urbanised and indigenous people. When a search party arrives at an island in Lake Titicaca to look for a missing engineer they get delayed. A community of Aymara found the body, but refuse to part with it before their rituals of guiding the deceased into the afterlife are completed. This sets the stage for a rumination on the irreconcilable differences between the two groups, from elementary customs to views on mortality.

The barren landscapes shot in stark contrasts by Marcelo Villegas make for a riveting arena where the Aymara and those from La Paz step by step probe each other during the waiting game turning into a haunt. At night while the fire burns those subtle attempts take on spellbinding forms in the midst of glowing embers. As cerebral an exercise on the technical versus the indigenous as El abrazo de la serpiente (2015), debuting director Carlos Piñeiro manages to let this meditation creep towards grandiose philosophical heights.

When I first saw The Cube Phantom at the International Film Festival Rotterdam (remember film festivals?!) at the start of the year, I placed it on top of my tentative list of favourite films of the year. Since then it hasn’t moved from that spot, which is rare – often this kind of year-end reflection is marked by recency bias, but nothing could erase the impact The Cube Phantom had on me. Despite the fact that the only time I’ve heard anyone mention it since, is when our venerable colleague Sean Gilman was less taken with it.

The Cube Phantom is a modern interpretative dance film with a pulsating soundtrack, which celebrates the beauty, vibrancy, history and resilience of Hong Kong and its citizens. Director Alan Lau is a documentarian originally, but felt enough documentaries were already being made about the current protests and wanted to makes something different. In ten chapters, Lau films the history of the protest movement of Hong Kong through the dance choreography of Jordann de Santis, on striking locations, with beautiful cinematography by Wong Shek-keung and wonderful music by Antony Cheng. They do so in a colourfeel, mesmerizing fashion. For a more eleborate review of The Cube Phantom, check out what Lisa van der Waal wrote about the film as part of our coverage of IFFR 2020.

“It started incidentally one night,” director Kurt Walker reminisces about the conception of s01e03. Walker was watching the pilot of the Gilmore Girls with a friend and they “were kind of in awe at its narrative ellipses”. That is, until they discovered they had accidentally been watching an episode much later into the season. Walker continues: “And it got me thinking about the potential of storytelling in excerpt form—as in something that exists in the middle of an overarching narrative that is withheld.” Much of our day-to-day life is lived through our screens. This is neither a good thing nor a bad thing, it’s a fact. Yet, cinema wrestles with portraying our world as is, screens and all. It is deemed much easier to add modern-day politics to a period piece set in the 19th century than to portray a meaningful relationship through playing a video game. Or to explore the feeling of accidentally watching the wrong episode of a TV-show. And to a certain extent this is true, because there are no traditional tools in place to capture these instances effectively, but then again it is exactly that obsession with effectiveness through established means that gets in the way of pure discovery. And I don’t know how else to put it, but s01e03 is something incredibly special and I hope inspires you as much as it does me.