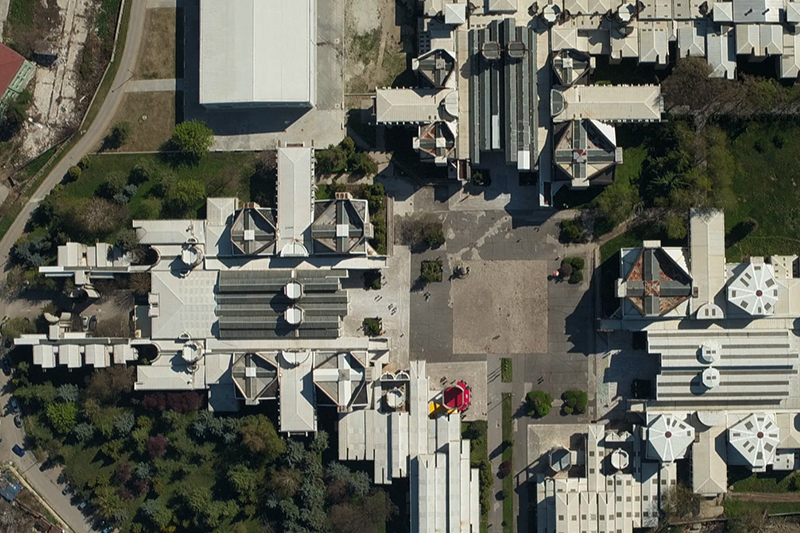 Slumbering Concrete: The City That Was Too Modern (2018)

After the earthquake of 1963, a contest was organised for the rebuilding of the Macedonian capital Skopje. The Japanese architect Kenzo Tange won the contest and together with a team of professionals he decided to rebuild the city in a modernist and brutalist style. Skopje would become a trendsetter for the rest of the world, with its architecture far ahead of its time.

This hopeful story didn’t even come to an end. After all, it appeared that the government wasn’t that keen on Tange’s project. So they stopped the funding, with the result that the building of the modernist and brutalist buildings had to cease. Sasa Ban’s Slumbering Concrete: The City That Was Too Modern (2018) takes you on a tour through the city, showing the unfinished buildings of that time.

Such as the train station. It stays about 10 metres above the pavement and had to give people the idea of Skopje as a metropolitan city. The government and the inhabitants of Skopje still don’t share Tange’s vision. They like to think about the Macedonian capital as a small city, in a positive way. They prefer the compactness of spaces and want them to be filled with cosy cafés and little shops. The intentions of the Japanese architect were good but probably didn’t meet the need of the Macedonians.

The film also takes you to an impressive student complex, where about 1200 young people live in. These flats are connected with each other by bridges and meeting points. “The complex was meant to be a place to study, but also a place to have fun and to socialise,” explains one of the former co-designers of the project. Hence, the rooms offer both privacy and public space. Again, the government doesn’t care about this well-meaning philosophy. The flats are hardly maintained and so a lot of students live in bad circumstances, as a Macedonian student of a film academy shows. Everything that is modernist or brutalist is simply ignored by the government.

We end our tour at the Macedonian Opera & Ballet, a building that initially had to be as a multi-disciplinary centre. However, the original idea is never realised. The cinema part of the building was never built for example. But it got worse. Nowadays, the modernist building is hidden behind a huge statue in neo-classical style. From the riverside, the statue – which actually looks like a big fence with four statues in it – covers the whole opera, like it is not meant to be seen.

This statue is only one of the many neo-classical and neo-baroque statues, buildings and façades that the Macedonian government planned to build under the project “Skopje 2014”. While other cities strive to become more modern, Skopje had to go back in time. The capital city had to be more monumental, more beautiful according to the Macedonian government’s standards in order to raise national pride.

The new old statues and buildings had to hide the modernist and brutalist style, and thus, the city’s (communist) past. Modernist buildings, such as the Macedonian parliament, even received a neoclassical façade. They were literally covered. The new architectural style had to give Skopje and Macedonia a whole new identity, but this was not the only reason to spend 80 to 500 million euro’s on the city’s make-over. By focusing on Skopje’s new image, the government tried to distract the attention from the high unemployment and poverty the Macedonian population was dealing with. It shouldn’t come as a surprise that people started to protest against the Skopje 2014 project. A woman who joined the protests shows us images of people throwing paint bombs against the new parliament’s façade. Their reaction is comprehensible.

It is indeed hard to understand that the government prioritises the presentation of its own history over the well-being of Skopje’s citizens. Besides that, Slumbering Concrete depicts the modernist and brutalist buildings in such a beautiful way, by letting the camera fly over and through them. This makes it even harder to comprehend that the government doesn’t want to maintain and preserve them. It’s a pity that Slumbering Concrete doesn’t contain any interviews with Macedonian politicians who were involved in Skopje 2014.

Anyway, if you want to enjoy Macedonian modernist and brutalist architecture: Either buy a ticket to Skopje as soon as possible or enjoy Sasa Ban’s film.