God’s Favourite Creatures: The Many Roles of the Monster in Guillermo del Toro’s Filmography 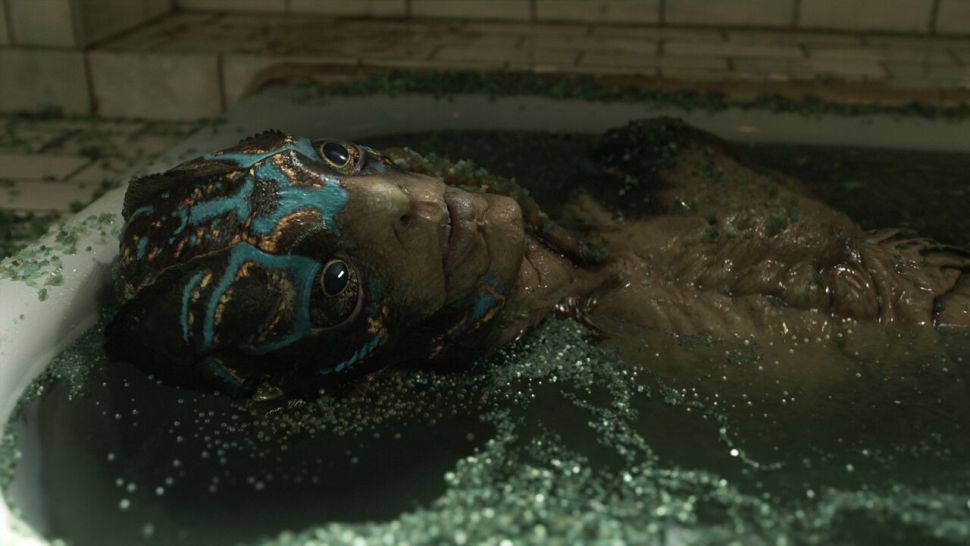 Doug Jones as Amphibian Man in The Shape of Water (2017).

Over the years Guillermo del Toro has cultivated such a unique style in the way he tells stories, both visually and in its story structure, that his films are unmistakably his own. Del Toro’s body of work has become associated with nothing short of opulence. Every frame writhes with visual richness and splendour. This richness is also carried through lovingly to his characters who in all their faults, mutations, and misfiguring unmistakably bear Del Toro’s mark.

There are certain visual images and themes that return in every del Toro film. Motifs such as insects, subterranean sets, the New York subway system, fire, clocks, music, fairy tales, mythology, cogs, poetic film openings that usually start the film off with a question about mankind, these are all deeply embedded in the very fabric of a del Toro film. However, it is the motif of the monster that returns without fail throughout the filmography of del Toro.

Since the beginning of storytelling, monsters have been created to help us humans process the unnamable. To help us understand that constant fear and anxiety. Therefore it follows that monsters become symbolic of the fears in their present time. Bram Stoker’s creation of Count Dracula symbolised the British fear of reverse-colonisation. Mary Shelley’s Frankenstein’s monster represents several fears such as science being able to eclipse religion, or the repercussions of Britain’s colonial period, to just name a few.

This tradition has also been carried through to film. The Godzilla monster is symbolic of the Japanese fear of nuclear or chemical warfare shortly after the tragedies of Nagasaki and Hiroshima. The mutated baby in Eraserhead (1977) represents the protagonist’s own fear of fatherhood and a fear that having children is the end of your personal life. Perhaps also a fear of the generation that will soon take your place.

Del Toro’s monsters are vastly different. Instead of representing fears or anxieties, they are outsiders seeking to find their place. In Del Toro’s world, monsters are endearingly human in their hopes, longings, and faults. In his films, monsters end up proving their worth. As Edith Cushing (Mia Wasikowska) says in Crimson Peak (2015) when defending her novel: “It’s not a ghost story, it’s a story with ghosts”. I feel that this declaration rings true when it comes to Del Toro’s film and the roles that monsters play in it. Insects are a recurring theme throughout Del Toro’s work and even when insects don’t appear in the film itself, it’s clear that Del Toro is inspired by the insect anatomy. In Cronos (1993) the golden orb that grants its master eternal life is operated by a slug-like creature. The slug’s lowly status is therefore elevated to powerful being. In Mimic (1997), the gigantic insect monsters turn out to be the victims of genetic manipulation and are not inherently evil. In Blade II (2002) the vampires’ mouths are clearly inspired by the insect anatomy. In Hellboy (2004) and Hellboy II: The Golden Army (2008) many monsters and creatures are once again inspired by the biological workings of the insect. In Pan’s Labyrinth (2006), the fairy who guides Ofelia (Ivana Baquero) to the faun starts out as a grasshopper and turns into a fairy at Ofelia’s request. Even when insects are not the main focus of the film, they can be seen creeping in crawling throughout. In Cronos, when the protagonist learns that an insect responsible for his newfound eternal life he seems surprised. To which his informant, De La Guardia (Claudio Brook) replies: “Who’s to say that insects are not God’s favourite creatures? Jesus himself walked on the water just like a mosquito.” This mentality would continue to shine throughout Del Toro’s work wherein which he always elevates the lowly, ugly, and downtrodden creatures to beings of power. In a conversation between Del Toro and director Christopher Nolan, Nolan asks Del Toro whether he actually believes in ghosts, to which Del Toro simply replied: “I’m Mexican”. Perhaps its this comfort with the dead or even Del Toro’s own experience with ghosts that makes the ghosts in his stories such rich and tragic figures. Del Toro’s ghosts are never malevolent creatures, but rather seek to warn or help the characters in the story from befalling a similar fate.

The ghosts are without a doubt terrifying and there certainly is a conflict between the ghosts and the protagonist at first. But soon an understanding develops between the worldly and the otherworldly and they work together to resolve their plight. In The Devil’s Backbone (2001) the ghost of the violently murdered Santi seeks revenge on his murderer. His goal is clear and concise. He’s not there to haunt and torment, simply to find a resolution. The boys in the orphanage soon work together so that they can get rid of their oppressor and help Santi tie up loose ends. Ghosts perform a similar function in Crimson Peak. Instead of haunting and terrorising, the ghosts in this film seek to warn Edith. From an early age, the ghost of her mother warns her against Crimson Peak. Once she reaches Allerdale Hall, she is confronted with the ghosts of the Sharpe siblings’ murdered mother as well as the murdered wives of Thomas Sharpe (Thomas Hiddleston). The ghosts are definitely ghostly, but they’re there to help. If there’s one thing about Del Toro’s work that is unmistakable, it’s the fact that it focuses on society’s outsiders. Those that are too nerdy, ugly, timid, or monstrous to be considered traditional heroes. Del Toro takes these outsider characters and lovingly elevates them to saviours and gods.

In Hellboy and Hellboy II, the film’s eponymous protagonist is an outsider because of his terrifying exterior as well as his obvious ties to the underworld, hell, and the eventual apocalypse. Despite the fact that he’s pushed to live on the outskirts of society he continues to fight to protect the masses. In Pan’s Labyrinth, Ofelia herself is an outsider thanks to her love of literature and fairytales. Yet, this outsider becomes a princess who rules her kingdom with grace and kindness after her earthly death. The Shape of Water

The theme of outsiders as heroes is once again found in The Shape of Water (2017). In this film, the Amphibian Man (Doug Jones) is first introduced as a monstrous and dangerous creature that becomes transformed into a god that can grant life and heal wounds. The female protagonist, Elisa Esposito (Sally Hawkins), herself is an outsider due to her mute status and a menial job as a cleaner. She lives alone on the outskirts of society. Yet, because of her love and kindness, she is transformed into a powerful being.

Throughout all his films, Del Toro generally takes the gothic romance and fairy tale genres and gives it his own twist to elevate the downtrodden. In Del Toro’s world, it is the outsiders that receive special status. This makes his recent Academy Award win not only a victory for himself, but for all the outsiders that have been inspired by his films for decades and will continue to be inspired for decades to come.

This Essay article was published in March 2018