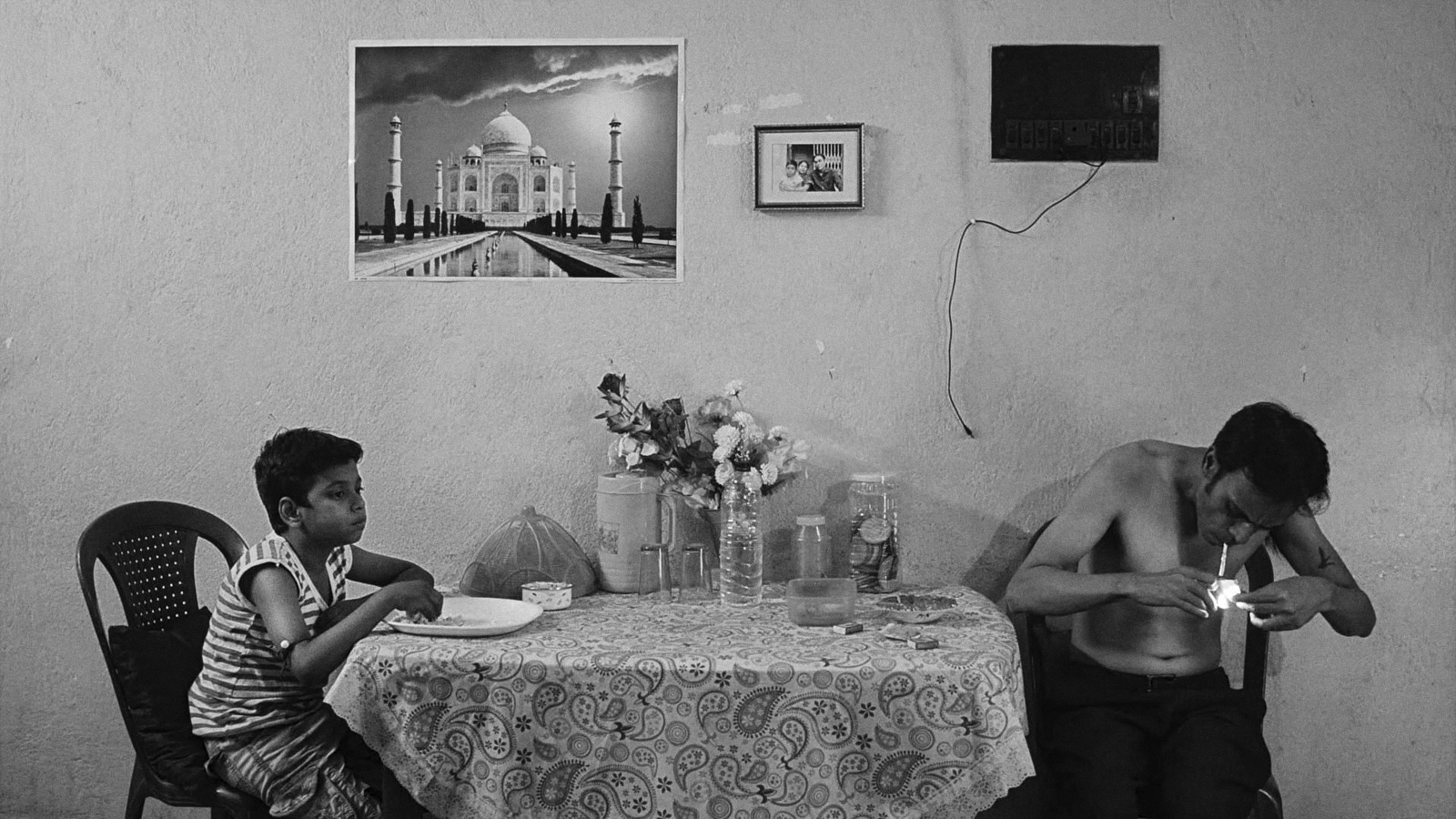 Almost out of nowhere, an aeroplane emerges; it’s parked on the ground and we see distant figures walking on its wing. Inside, friends huddle up and get high.

Two boys stand under the light of a halogen street lamp somewhere in Calcutta, in the late 90s. They are high on brown sugar and one of them is carrying a syringe filled with the intoxicant. He asks the other to push the clear liquid into his head. They take their shirts off, then their trousers as their fingers play on each other’s bodies, tracing soft lines as they wander off in search of veins. One pushes the syringe, the other bends back slightly; then the syringe exchanges hands and one pushes the syringe into another’s body. Sometimes it’s the shoulder, sometimes the arm and sometimes you can’t tell what part of the body. Everything is dark around them and in the little pool of halogen light in some unknown streetside, two bodies move, turn, twist and bend while a violin plays in the background; almost like a ballet routine captured in the middle of a performance; cloaked in black and white. There is an exquisite beauty in the ecstasy of this high, uninformed by the pain of withdrawal; a quasi-divine element to the happiness that runs through the veins of these two boys.

Through the late 1990s and the early 2000s, the streets of urban Calcutta were hotbeds of brown sugar peddling and addiction. An entire generation grew up injecting themselves with it and smoking it from foils; an entire generation stumbled through these years as they lost and sometimes found themselves through this haze. Ronny Sen’s Cat Sticks (2019), which was recently the only Indian film in the Slamdance slate, looks back at this generation and through the characters of Byang, Toto, Ronnie, Deshik, and their friends, resurrects a whole generation that lived through the times.

“This is to call my dead friends back from the night.” Sen’s dedication reads.

Monsoons in Calcutta are unlike other rainy seasons in other cities. It rains hard, for days on end as the streets fill up to their brims. In Cat Sticks, it rains throughout the film, almost as if it were draining all the colours out of the film.

Shelley, in a completely different context and time, had written: “Our sweetest songs are those that tell of saddest thought.” Cat Sticks is one such song singing of one of the most under-recognised, unacknowledged and unsolved crises of our times in Calcutta; it resurrects the memory of a whole city standing by, watching a whole generation waste away, and doing nothing. Sen’s screenplay co-written with Soumyak Kanti DeBiswas aided by Shreya Dev Dube’s very lush black-and-white cinematography leads a double-life as it sucks its audiences into an aesthetically beautiful narrative that walks in and out of magical realist tropes and leaves them spellbound, all the while reminding them of the pain and hopelessness that underlie all of it. Devika Dave’s production design serves as the perfect complement to the masterful and very self-restrained storytelling. A very capable crew come together to create an able work of art centering around a theme that has historically fuelled depressing and extremely cynical narratives. Cat Sticks is not a sad film but it could’ve been one if Sen and his crew didn’t choose to see the inherent beauty that exists in the drug-induced, haze-like lives the film’s characters live in: it lives from one moment of beauty to another punctuated by the throes of desperation that interrupt their lives. And after this interruption, no one ever emerges out as the person they were before it struck.

A father, Biplab (Raja Chakravorty) smokes brown sugar fumes off a strip of aluminium foil while his son quietly eats his food and the TV drones on in the background. The boy keeps eating and the TV stays on, but the man changes in front of our eyes and becomes a stranger we never knew he could transform into. An alternate life emerges as intoxication makes him (literally) turn into a new self: he puts on a wig, a sari, and walks out into the streets performing an alter ego that his addiction eases into being. At the end of his and the film’s long-winding performance, he comes home to his son and his older discarded self.

Standing under heavy rains, his clothes soaking wet, Ronnie (Sumeet Thakur) checks into a rehabilitation centre that he has been in, in the past. The man who runs it arranges for some clothes for him while Ronnie stands outside, finishing the remaining stash of brown sugar in his pockets. The rain comes down hard against the tin roof of the shade he sits under. Once he walks into the centre, he meets an old friend who plays him a song on his harmonica. It’s almost like a homecoming.

Some of the other transformations, however, take on different trajectories that never come back to the point where they started. Some people get violent, some steal, some cheat other people of their car keys and some even end up killing someone. With vacant eyes and fidgety fingers, the characters stand in waiting, to get to wherever their trajectories take them.

In a dingy Calcutta bylane where a drug dealer dies, three young men sit waiting for him. While one recounts of the police torture he underwent, another rattles off a French slogan from the 1968 student movement. Addiction weaves out a web that leaves out no one: the intellectual Presidency College-going student sits on a brick wall chatting with a small-time crook and a filthy-mouthed man. This is the furthest young people could’ve come, from the radical energy of the student movement that Sen invokes.

However, Sen’s telling of these stories is not a regret and neither is it a call that wants to force the government or its narcotics department into re-investigating an overlooked crisis. Cat Sticks is a memorial that Sen builds to the memory of the people who lived and died through the strange time — unable to keep pace with their vacant eyes and empty futures, with a society that constantly strived to move on.

When Byang (Tanmay Dhanania) and Potol (Sounak Kundu) sit on a steamer boat, probably flowing through the waters of the Hooghly, their silhouettes stand against the grey Calcutta night. Potol has heard that Orna (Byang’s love/lust interest; Sreejita Mitra) is leaving the city and Byang keeps asking the same question, “You said you would show me the ocean, why did you bring me to the river?”

We know that Cat Sticks takes after the matchsticks it is named after, and brings to light the story of a generation the times perhaps failed.

A generation to which we promised an ocean, but could afford to give only a river.