Hearing Between the Beats: On Steven Soderbergh’s Hiatus-ending Logan Lucky 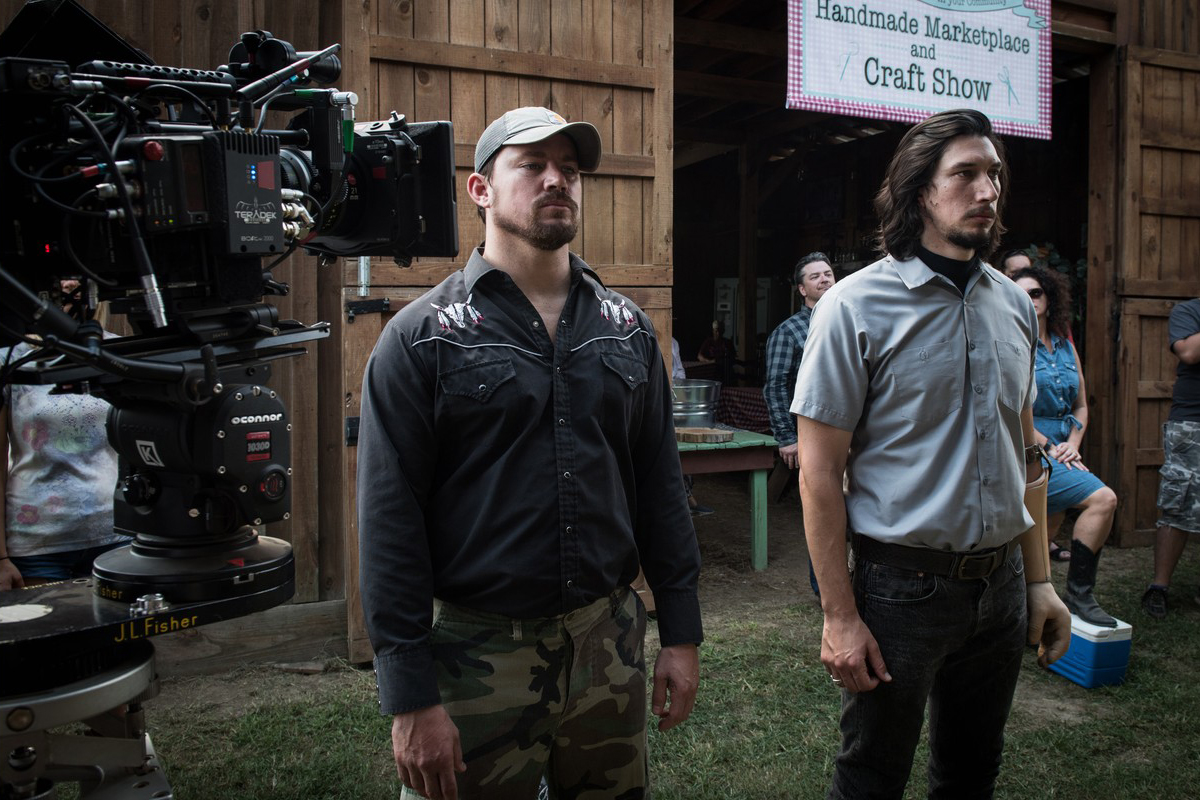 Channing Tatum and Adam Driver on the Logan Lucky set.

In December 2010, while Matt Damon was doing his press rounds for Contagion (2011), the actor lamented director Steven Soderbergh’s upcoming retirement. “He’s kind of exhausted with everything that interested him in terms of form,” Damon told the press, “He’s not interested in telling stories. Cinema interested him in terms of form and that’s it.” Shortly after Soderbergh confirmed Damon’s comments, the consensus being that the director needed a radical change.

“The primary reason is feeling frustrated at my knowledge being at a standstill,” Soderbergh told The Independent early 2012, “I need to tear down my processes and start over again if I’m going to come back. I’m not going to come back unless I’ve figured out a new way to do this by my definition.” He also mentioned wanting to direct three more films – respectively Magic Mike (2012), Behind the Candelabra (2013), and Side Effects (2013) – and then quit. Or retire. Or take a prolonged sabbatical. The press could never truly figure out the semantics, but whatever the case: Soderbergh wanted out. He wanted to paint.

On April 27th, 2013, a few months after releasing Side Effects, Soderbergh got on stage at the San Francisco International Film Festival to deliver a speech on the state of cinema, particularly the obstacles filmmakers face working within the confines of Hollywood. If there ever was a final text in the hiatus-narrative, it is this. And although I implore you to watch or read the whole thing, I want to highlight one bit early on in this address.

“So I think that life is sort of like a drumbeat. It has a rhythm and sometimes it’s fast and sometimes it’s slower, and maybe what’s happening is this drumbeat is just accelerating and it’s gotten to the point where I can’t hear between the beats anymore and it’s just a hum.”

It’s been four years since Side Effects and the State of Cinema address. I haven’t seen a lot of paintings, but I have seen The Knick (2014-2015), a two-season medical-drama set in the first decade of the 1900s which Soderbergh directed for Cinemax. And as of August 2017, the director officially ended his feature film hiatus with the star-studded Logan Lucky (2017), a heist-film targeting a NASCAR speedway in West Virginia. An inversion of Soderbergh’s own Ocean’s Eleven (2001) trilogy, where he’s “trading the Armani in for Carhartt.” Soderbergh was never really gone, but I’m glad he’s back.

Now, having seen about 30-odd films in the cinema this year, I wondered what had changed in his absence. How would a Logan Lucky stand shoulder-to-shoulder with the likes of Spider-Man: Homecoming (2017), Dunkirk (2017), or Hitman’s Bodyguard (2017)? How would Soderbergh tackle his so-called comeback? Well, simply put: not with a bang, but with a whimper. Or rather, with deliberation and restraint.

The narrative of Logan Lucky is obviously an arousing affair. Soderbergh knows how to deliver a movie where the forward momentum is mostly determined by the mechanisations of the heist (or: puzzle). Every new scene and every bit of movement, is motivated by what preceded. But the presentation itself is none of that. Camera movements and cuts happen only when necessary, and the sound seems a few decibels quieter than the aforementioned summer releases. Its entire design is in place to deliver a pleasant experience. This deliberately slower pacing is there for the audience to make sense of the story, which in terms of heist-films can be complicated.

The ‘different’ design is noticeable from the very first shots. “I call it the three-shot rule,” explains Soderbergh to Film Comment, “after the first three shots, I know whether this person knows what they’re doing or they don’t.”

Logan Lucky opens with a close-up of Sadie Logan (the young Farrah Mackenzie), after which the camera slowly tracks back to reveal Jimmy Logan (Channing Tatum) working on his pick-up truck. Jimmy tells a story about John Denver, while Sadie hands him the tools when asked for. During this scene, the camera movement stops, and waits until Jimmy’s story has concluded, lingering on this wide shot of father and daughter. This is a $29 million, star-studded heist-film, and yet it opens with a minute-long, single-shot moment of character. The succeeding shots, both placed in the same scene, wrap what we need to know: This is going to be a story motivated by family. And it’s going to have a very deliberate pacing. And it’s going to be pleasant.

What’s magnificent about Logan Lucky is its confidence. It doesn’t try to be more than it sets out to be. At the end of the day, it’s a light-hearted genre film, exhuming the craft of film-making. And yeah, it makes sense for Soderbergh to end his hiatus with a film like this. He doesn’t want to make ‘important movies’ like Che (2008) anymore. Remember, experimentation is key. In a film-climate where most, if not all, non-arthouse outings are designed to overwhelm or terrorise its audience (I’m looking at you, remake of It (2017)), it’s considered progressive to see people get up and smile and be relieved with how nice the experience was. As weird as it may sound, Logan Lucky goes aggressively against the grain of the modern blockbuster by turning it down a few notches. By not going to eleven. In that mode of thinking, Logan Lucky might be closer to the likes of Apichatpong Weerasethakul, Béla Tarr, and the contemplative cinema movement.

Logan Lucky is a nice film. And while nice won’t win Soderbergh any awards, nor will the film be collectively considered a masterpiece, it’s still the best time I’ve had in the cinema this year. And just for 118 minutes I swear I could hear the pauses between the drumbeats instead of a hum.