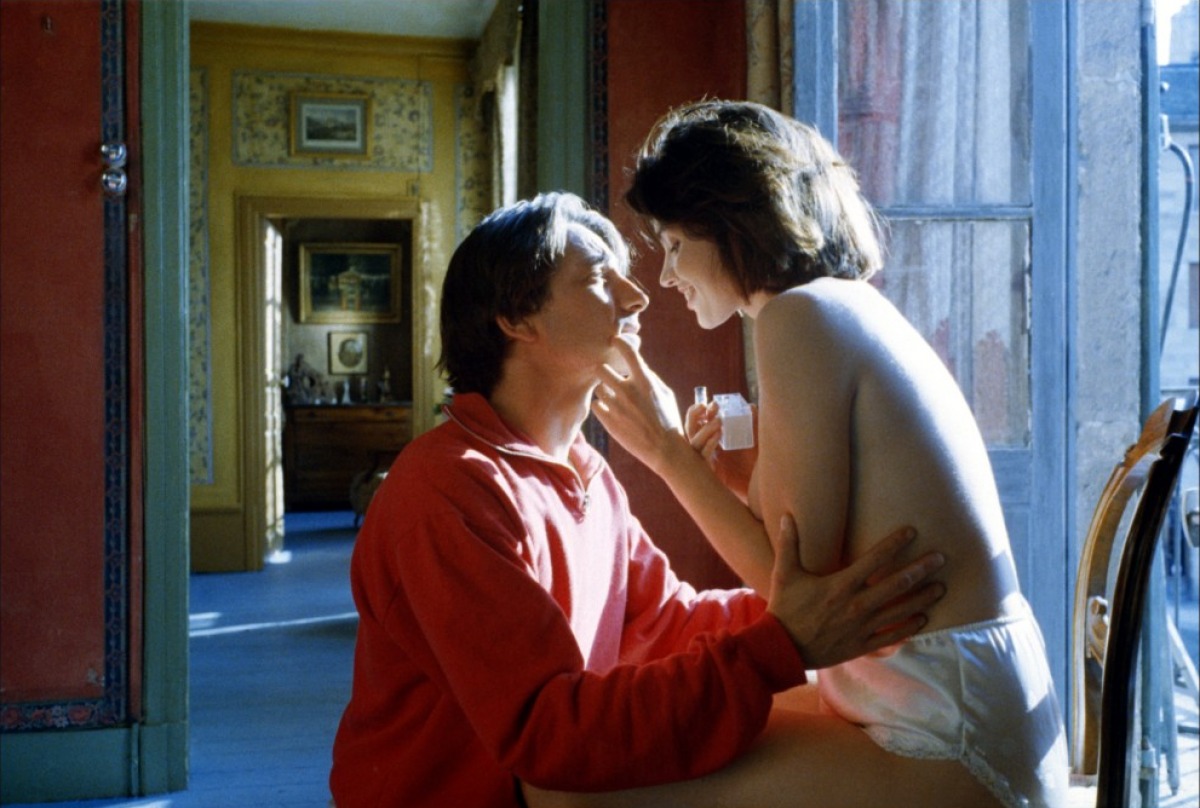 As we fan ourselves at Frameland during the current heat wave hitting many parts of the world these weeks, we celebrate eight films featuring heatwaves and summer heat. So you can feel the warmth even if you live somewhere not hit by the heat right now, or fully immerse yourself in the heat on display in this mixture of known summer classics and lesser-known hot films from four different continents. Two teenage punks spend a scorching summer in a riverside town in China doing nothing much at all: hanging around, engaging in petty crime, hitting on girls, passing out drunk in a dingy karaoke bar. This is no coming of age story (the kids learn absolutely nothing), nor a depiction of wasted youth in the bleak manner which European cinema has grown fond of, but instead a mood piece — and a highly engaging one. A minimalistic piano score sometimes crops up to enhance the sombre atmosphere, and the film’s formal style confounds the sense of aimlessness and lethargy. It’s shot in very long, mostly static takes, many of them extremely beautiful, some of them with great depth of field, allowing for fascinating background/foreground interplay; visual contrasts and parallels between scenes are rife. The only time the camera is actually moved beyond a simple pivot is when it’s on a boat, which finally takes one of the characters away from the town. Director/writer/DOP Yang Heng would add layers of sophistication to his later films, but those can’t beat his haunting debut for its simple elegance. Hot times, hot tempers and hot sex. This semi-erotic French film (Wikipedia describes it as an “erotic psychological drama”) from 1986 is a cult-classic in France. It’s also the film which brought a young Beatrice Dalle out of unknown teenagehood into adult stardom as she would go on to play for directors as diverse as Jim Jarmusch, Virginie Despentes and Jean-Pierre Mocky. Here she is playing Betty, a capricious, intense 20-year-old who has an affair with a 30-year-old house painter, Zorg. The film is a lot of fun to watch on a long summers day, albeit in a voyeuristic, anti-feminist kind of way. Betty has a ‘crise de nerfs’ (a nervous breakdown) every now and again, throwing things, lighting things on fire, injuring people with unlikely implements like combs and running sweatily yet sexily through the streets of small-town France. The French title for this film is 37,2 le matin, a reference to the average temperature of a pregnant woman in the morning, but the expected pregnancy drama never arrives. Instead, Betty and Zorg get into more and more ludicrous situations in this supremely hot French summer in the 80s. Ringling ice cubs in glasses filled with alcohol. Garden chairs scratch on the pavement next to the swimming pool. The sinister sound of thunder is getting louder. A girl wanders around inside the house. A woman falls, just like the glasses she held in her hands. They both hit the ground, first the glasses, then the woman. On top of this, it starts to rain. Can this summer get any worse?

The Argentine bourgeois family of Mecha wants to avoid the hot summer weather in the city. Therefore, they spend the summer on their country estate. It’s a summer full of children throwing water balloons, adults drinking lots of alcohol in self-pity, teenagers watching each other, laying in the bed all day long and partying and waking up with a hangover and a bleeding nose the next morning, probably having no idea what happened last night. Moreover, the swimming pool gets dirty.

Meanwhile, director Lucrecia Martel, who based La Ciénaga on memories of her own family, observes the family members from a distance. She alternates her observations with uncomfortable close-ups of the characters. The skin of the characters is covered in sweat, caused by the heat or by the plight in which their family’s secrets unfold? It’s hard to say, but one thing is sure. There are better ways to spend your summer. On August 22 1972, New York witnessed a case of truth being stranger than fiction. In the sweltering heat of that summer afternoon, Sonny Wojtowicz and Salvatore Naturale attempted a poorly prepared bank robbery in order to finance Wojtowicz lover’s sex change operation. They failed; soon the alerted police surrounded the bank, in effect turning the heist into a hostage situation that attracted public and media attention. As the temperature and tensions rose, Wojtowicz and Naturale demanded safe passage and an escape by plane, or else they would kill the bank’s staff members. Over fourteen hours later their escape attempt was thwarted by the police, resulting in Wojtowicz’s arrest and the death of Naturale.

Three years later these unlikely real-life events formed the premise of Sidney Lumet’s crime drama Dog Day Afternoon. Given the outrageous nature of the actual heist, the film could’ve easily veered off into campy, over the top parody. That the resulting film is instead a compassionate, balanced portrayal of ordinary people under extraordinary pressures is a testament to Lumet’s integrity and craftsmanship. And in no small part due to the outstanding acting performances, in particular by Al Pacino (Sonny Wortzik), John Cazale (Sal) and Charles Durning (Capt. Moretti), who imbue their characters with credibility and deeply felt humanity. Chris Sarandon’s performance as Leon, Sonny’s anguished gay ex-lover, is also solid and totally believable. This is crucial, as much of the film’s persuasiveness hinges on the credibility of Sonny’s and Leon’s relationship. Dog Day Afternoon’s humanity, wit, intelligence and compassion convincingly show why the 1970s are such an oft-lauded period in American filmmaking. Not too many films can marry everything a country loves. Ashutosh Gowariker’s 2001 epic Lagaan, about a mythical cricket match between the farming villagers of Champaner, a small western Indian village, and the officials of the British Empire, not only manages to marry cricket and Bollywood, the country’s two greatest loves, together but also manages to make it a triple bonanza by successfully tugging at the nationalistic fervour of the countrymen without being too jingoistic. In short, it is a complete package that ticks off every box when it comes to the perfect commercial Bollywood blockbuster.

The summer of 1893 in Champaner seemed eternal with a prolonged drought; the farmers are already worried when the British administration decides to impose high taxes on them. All seems bleak till one day the hero, Bhuvan (Aamir Khan) watches the British men play cricket and makes fun of the game. Furious, Captain Andrew Russell (Paul Blackthorne) challenges the villagers to a game of cricket and agrees to waive off all the taxes if they win.

At the end of a long drawn, sweaty narrative played out under the merciless Indian sun, we have a story that finally lets you heave a sigh of relief and catharsis, after having witnessed one of the most entertaining re-imaginings of colonial history. Fruit Chan’s second feature takes place between April and September of 1997, the summer of the colony’s Handover from the United Kingdom to the People’s Republic of China. A group of soldiers, discharged members of the British Hong Kong Army, are unable to find work in such economically precarious times and decide, in a familiar ‘why not?’ gesture, to rob a bank. But they aren’t the only ones: another, younger and more dangerous, gang robs the bank just before they do, a cosmic coincidence that kicks of a chain reaction of chaos and death. Many a Hong Kong gangster film, dating back to Johnny Mak’s The Long Arm of the Law, released in 1984, the year of the Joint Declaration that set 1997 as the date of the Handover, tapped into the apocalyptic fear and dread of the colony’s doom, but Chan’s underworld saga has an immediacy to it rare in the genre, attuned to the climate both literally and spiritually, seamlessly incorporating footage he shot during the actual Handover events with staged scenes of violent and romantic longing. The fictional world, tightly-plotted and -characterized in its first half, dissolves in the second in a dizzying unravelling of loyalties, national, societal, familial, all melting away in the black humidity of an unending monsoon. It’s a long summer and it’s the last summer, its many, many fireworks (the Chinese title roughly translates as “Last Year’s Fireworks Were Especially Big”) celebrating with loud authority an uncertain future. On a hot and sultry Valentine’s Day in 1900, a schoolteacher and a group of young girls from an Australian boarding school vanish without a trace while visiting Hanging Rock, a mystical place believed to possess supernatural powers by the Aboriginal natives. The only girl to return from the group is in an overwrought state, unable to deliver more than a rambling and incoherent tale. This mysterious and fictitious occurrence forms the premise of the novel Picnic at Hanging Rock (1967) by Joan Lindsay, which was used by screenwriter Cliff Green as the basis for the similarly titled film by director Peter Weir in 1975. Touching upon many subjects (class distinctions, clashing cultures, racism, mysticism, sexuality, social conformity and (in)sanity), Weir’s film sometimes feels like a veiled political statement hidden deep inside a Pre-Raphaelite nightmare. All the while maintaining the mystery, tension and dread that lay at the core of Lindsay’s novel. Russell Boyd’s excellent cinematography frames the arid landscape and the young, burgeoning women like a surreal dream that is both hauntingly beautiful and menacing, while Gheorghe Zamfir’s pan flute perfectly encaptures both the romantic aspects of the story and the timelessness and indifference of nature. Ultimately, what makes Picnic at Hanging Rock so unforgettable is an underlying sense of power – invisible and elusive, yet raw and unyielding. Power born out of the land, strong enough to erase the temporary inequalities of history. Detective Sato (Takashi Shimura) perpetually wipes down his face with a white cloth while helping rookie detective Murakami (Toshirô Mifune) find his pickpocketed gun back. If it’s not because of their sweaty encounters, then it’s probably the heatwave sweltering over the city. Murakami takes a lead in for questioning, but is adviced against entering the tin-roofed building by the officer in charge. A line of club dancers try to keep up their routine with a smile, but the pearls of sweat emanating from their foreheads are proof of how oppressive this heat is. Everything takes longer (shown in Kurosawa’s beautifully composed wide long takes) and everyone is constantly at boiling point. It’s the perfect setting to teach Murakami some patience. That level-headedness in the literal heat of the moment can yield a better result. And all this is communicated without showing a single image of the blazing sun looming in the sky.