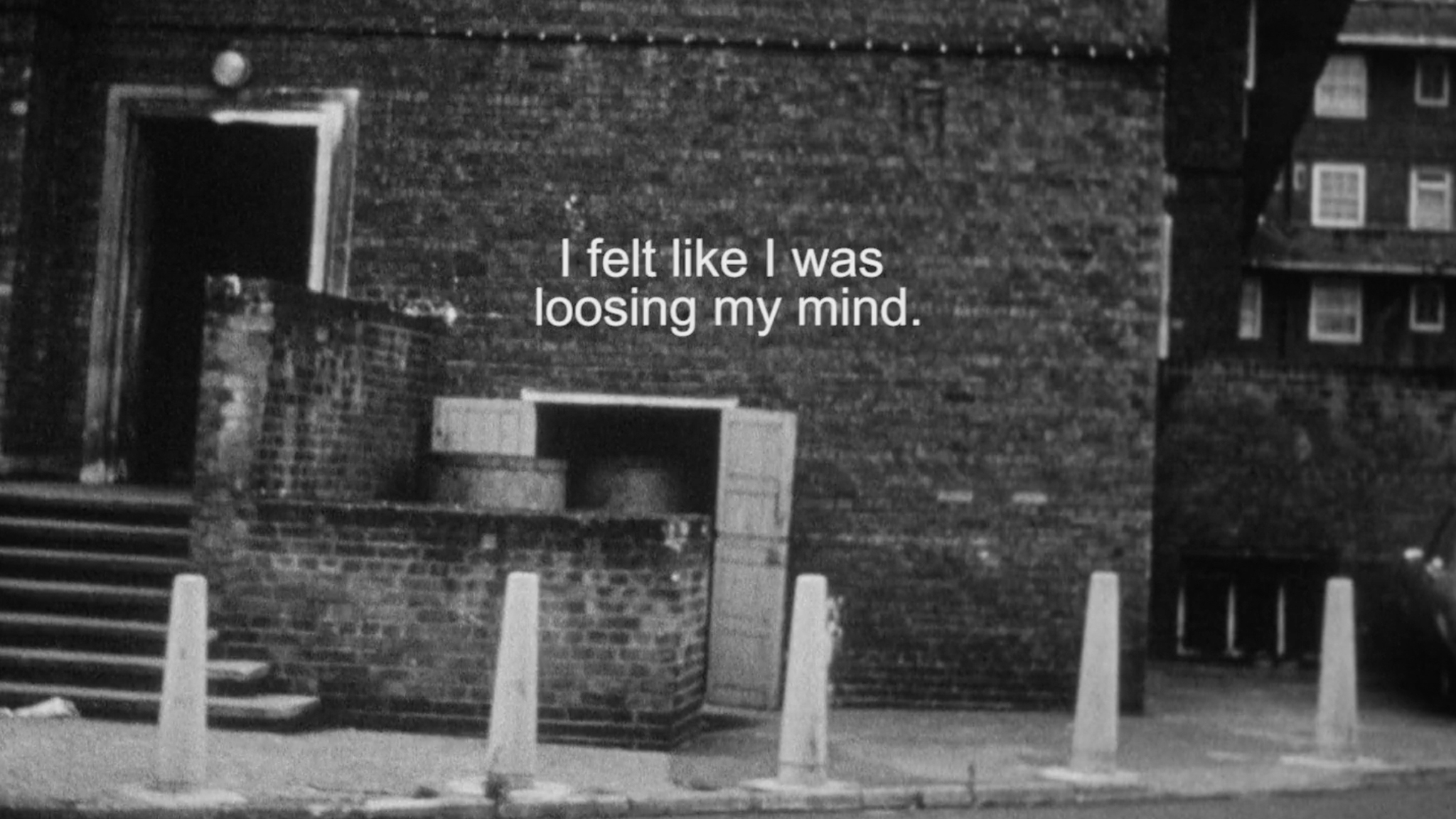 A black and white stills picture of a room, grainy and slightly weaving. Abstract drawings on the wall, two young women halfway into their conversation, an open window. Immediately, an authoritative voice probes the soundtrack. The voice speaks of psychedelic drugs, about their benefits and the promise of expanding the self. Then text appears. While the voice sets the stage, describing a candle-lit room without chairs or furniture, the text reads: “I accidentally set fire to my room. Everything in it burned.”

The voice belongs to Timothy Leary, a psychiatrist with a taste for psychedelic drugs. His voice speaks of opening pandora’s box, being confronted with “the many levels of energy, many realms of consciousness which are available to man”. The text is an autobiographical account of Morgan Quaintance’s drug-fuelled teenage years. The pictures are his as well. While the voice hits the apex of profundity, the text describes unfathomable hallucinations but only to conclude that “it was all just shit I saw.”

Surviving You, Always (2021) alternates these anecdotal vignettes with poetic interludes made up of early digital footage played at very low frame rates. Most of these images are blurry, filmed from an unconstrained hand, possibly by a child. These interludes are accompanied and sometimes even entirely carried by snippets from modern songs and classical music. Here, Quaintance reveals himself to be a collector rather than a director. Thoughts, notions and elements are curated and assembled in the montage with great empathy and precision. This collage-like approach is even noticeable in the way Quaintance chooses his images. In an interview conducted for the festival, he mentions how he’s is uninterested in creating a ‘lush image’. Taking a pretty still from this film is not the point as it is in the collection of frames where its beauty is revealed.

In the same interview, Quaintance mentions moving house many times over. The sizeable amount of pictures from which the stills in the film were taken has over time widdled down to only a dozen. And yet, even without these visual reminders, the filmmaker found himself involuntarily revisiting parts of his teendom. An irreproducible moment in time, he says, as the London of the 90s is far removed from contemporary London. He describes it as a place where classes folded into each other. Even if there was great economical disparity, it was less noticeably segregated than, for instance, other big cities in faraway countries.

This immediately feeds into another element presented in a later vignette. Ram Dass, a colleague of Leary’s, says: “When you’ve become a somebody, then you can start the journey to become nobody.” Quaintance juxtaposes this with a picture which he describes as ‘the only safe entrance to my estate’. Further texts reveal a milieu of anxiety and paranoia, of threats and violence. This is preceded by low-grade, under cranked home video footage of a middle school. We hear a group of young men assert their individualism through their clothes. Dass’ and Leary’s discourse is fine and all, but self-actualisation is a luxury most people can not afford. There’s no space, either mentally or financially, to think of the self outside of surviving. And the only way into the perceived realm of individualism is through the purchase of luxury items. It is a contrast, or rather contradiction, the filmmaker felt throughout his life: they were trying to expand their consciousness surrounded by brick walls.

Through all of this, Quaintance starts weaving a story of his infatuation with a friend. This non-actualised romance seems to be the main trigger for his involuntary existential time travel. A deep yearning permeates here, which he so brilliantly captures in the earnest and the angsty. “Loneliness was my prison. And I was locked up for years,” the text relates to us. This was what it felt like, he seems to say, and there’s no way around it.

Each individual element is carefully placed so to contradict and criticise whatever precedes and whatever follows, building a complex tapestry of emotions and ideas. Highlighting a single moment does not properly communicate its spellbinding quality, as it is exactly what precedes and what follows that makes it so spellbinding.