How Do We Talk About Black Women Singing? 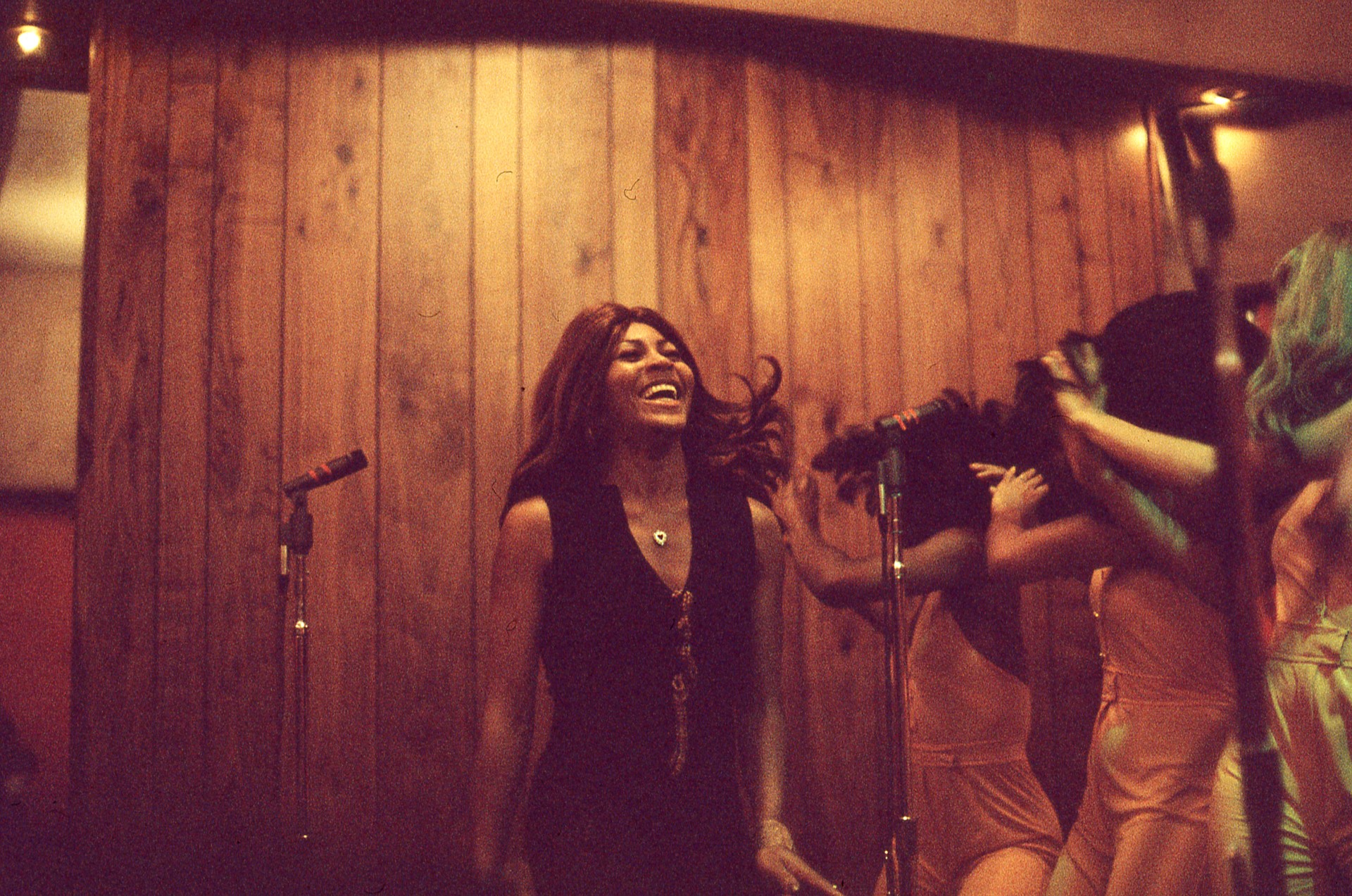 In Beloved, Toni Morrison writes of Baby Suggs who’d gather Black men, women, and children in a clearing: “In the heat of every Saturday afternoon, she sat in the clearing while the people waited among the trees,” she wrote. She’d ask the men to dance and the women and children to watch. Morrison adds:

The body of the Black woman, forever at the intersection of patriarchy and race, finds itself at the centre of not just Morrison’s works but also a spurt of recent documentaries that set out to capture the lives and works of three musical geniuses – Tina Turner (Tina, 2021), Nina Simone (What Happened, Miss Simone?, 2015), and Billie Holiday (Billie, 2019).

Tina, by directing duo Daniel Lindsay and T. J. Martin, premiered at this year’s online Berlinale and is the latest in that sequence of films that try to tackle the many complexities that make up the inner and outer lives of these women. All three of these documentaries show us the ways in which each of them fights abuse, addiction, and racism to build themselves the legacies we treasure and partake of. These women inspire the audience to look at them and themselves with so much love that centuries of hatred begin to dissipate. It is at once a celebration and assertion, an insistence on existing in the face of broken systems that want you to surrender and perish.

Tina Turner grew up in Tennessee and St Louis admiring the beauty and the stardom of white women in Hollywood. “I didn’t think I’d achieve that because first, I wasn’t pretty. I didn’t have the clothes or means,” she says in Tina. A childhood of poverty marked by flawed parenting is a common thread that runs through the lives of Turner, Simon, and Holiday, and forms a sizable chunk of the narratives of their lives. James Erskine’s Billie (2019) sheds light on Holiday’s childhood, which was spent living in a rented apartment owned by a brothel owner and surviving repeated sexual abuse and continued sex trafficking. The sixth of eight children, Nina Simone was born into poverty and played her first piano concert at 12; a concert where her parents were denied seats in the first row. Liz Garbus’ What Happened, Miss Simone? (2015) goes on to recount Simone’s rise from the wrong side of the tracks into a career marked by immense success and a long struggle with abuse and mental health—themes that keep recurring through the other documentaries too.

As informative and inspiring as these documentaries are, the resounding question that emerges is, can we talk about a Black woman’s genius in a way that can look beyond her mental illnesses? Each of these women emerges from years of unchecked abuse, dealing with trauma with little to no psychiatric help, and creates unparalleled art in ways in which people didn’t think was possible before they decided to go ahead and do it. There are entire ecosystems built on racism, misogyny, and chauvinism that drag these women to the point of mental breakdown; a place in their lives they continually try crawling out of.

To see Billie Holiday’s addiction as a result of her heartbreaks is to ignore the existence of systems that pushed her, over and over again, to trust men who beat her up and took control over all her earnings. Holiday lived and sang in a segregated society where she had to enter nightclubs through the kitchen. When she toured, she wasn’t allowed to use the bathrooms in a filling station. Whenever she and her bandmates managed to find a restaurant that would serve her, she’d pack an extra hamburger in her purse because she didn’t know when she’d be lucky enough to be served food again.

Why, then, does her mental illness become only her cross to bear? What prevents a documentary from reading her mental illness and consequent addiction as an obvious reaction to the society’s refusal to treat Billie Holiday like a human being and her art as revolutionary. Primarily because she was Black, but also because she was a brilliant woman whose talents continuously knocked down the walls the society built around her.

In this context, it is also important to assess how the audience and the media talk about mental health and how this conversation changes with the subject—from white to Black, from man to woman. Across decades, it’s heart-breaking to notice the hypocrisies in the way the media talks about a successful Black man’s (say, Kanye West) mental health and evokes warranted sympathy and the ways in which a bipolar woman like Simone has to be portrayed as a failing mother, an angry performer trying to hold it all together and failing. The media’s insistence on focusing on Turner’s abusive marriage, even after her divorce, and its refusal to respect her space and time as she processed the trauma, is resonant of several news interviews that continue, to this day, question women on their role and agency in abusive situations that nearly cost them their lives. When we see Simone’s daughter, Lisa, speak about her mother’s anger and erratic behaviour, one wonders what it adds to the documentary. Most of us are aware of the symptoms of depression and bipolar disorder. Do we need to talk about them when speaking of women who live with them? Especially women who go ahead and change the world, anyway.

When Tina Turner is asked in an interview who she’d like to play her character in a biopic, she says: “I don’t want to play the part”, because it’d be too harrowing for her to relive the abuse she had met at the hands of Ike Turner, her husband, bandmate, and co-creator. After years of surviving abuse and negotiating with guilt and fear, when Tina Turner finally sought a divorce, she was left penniless. Nina Simone married Andrew Stroud who later became her manager who worked her to the bone and was physically and mentally violent. He made sure to deny her all the money she had earned through her art. As a viewer, one is livid and shaken to the point that one wonders if such retellings should come with a trigger warning for the thousands of women who live and fight abuse.

What makes it even worse is the airtime these documentaries devote to therapising the behaviour of the abusers and speaking to them. While the ethics of this is murky by itself, it gets even worse when the subjects and the survivors are no longer alive to speak for themselves. Both Ike Turner and Andrew Stroud appear in the documentaries sharing their “side” of the narrative; always with a tone of condescension underscored by an intent of looking out for their talented but financially (and mentally) unsound wives, who’d have walked into their descent a lot earlier had these men not turned up to salvage their careers. When the ethics and politics of documentary filmmaking and storytelling have moved on beyond the insistence on telling “both sides” of a story, why are we still framing the accounts of survivors by the narratives of abusers?

But what have I got?
Let me tell ya what I’ve got
That nobody’s gonna take away

All documentaries about Black women are essentially survival narratives, especially the ones that centre themselves on women who have gone on to change the way we live and sing. Turner, Simon, Holiday, and the many women who don’t have documentaries to their names, represent a radical resistance against every institution that tries telling women how to lead their lives and make art. Each of them was born with different names and identities and they decided to be reborn in their new identities as artists who would fight for their freedom and that of hundreds of other women like them.

It is important that films about their lives, whether they be documentaries or fictional biopics treat them as such and acknowledge that their lives have been, and continue to be, fierce, fiery, and ferocious. Even when, within their fabled careers, they didn’t achieve what they set out to achieve. Turner refused to sing pop songs and dreamed of selling out stadiums with her rock concerts (which she did). Billie Holiday sang jazz all her life refusing to give in and sing the Blues like the “coloured mammy” her manager considered her to be. Nina Simone wanted to be the first Black American classical pianist. To sit and imagine a world where these phenomenal artists found the freedom to create the art they wanted to create, without endangering their lives, is what I’d love to see more documentaries doing.

Black singers, especially women, inhabit an extremely precarious position as they take their bodies and occupy a very public space that is monitored and scrutinised. Like they say in Billie, Billie Holiday was fighting for equality before Martin Luther King Jr. What does it take for a woman like her to sing “Strange Fruit” in a nightclub with white patrons walking out in protest? What does it mean for Nina Simone to write and sing “Mississippi Goddam” knowing fully well that the record companies would boycott her, and what does it mean for her to withhold taxes in protest against America’s war on Vietnam? For me, there is very little differentiating them from the hundreds of Black bodies that stand in defiance of the police on the streets of America. To make documentaries on women like Holiday and Simone and refer to their civil rights activism in passing, among the many other parts of their personality, while finding the time to include their abusers’ narratives, sounds like a dangerously negligent use of the documentary form in itself.

There is a danger in documentaries celebrating Black exceptionalism as they do the harmful work of creating a wedge between the common Black working class and the Black people who achieve fame and relative economic success. The lives and careers of Turner, Holiday, and Simone, even with their diamonds and fur coats, lean towards a brave defence of Blackness and solidarity for resistance that is rare among celebrities. These are women who spend their lives trying to outlive the drudgeries of their abusive pasts and yet find it in themselves to risk it all for a promise of justice.

While Black people are killed on the streets every day, it is important to build narratives of class solidarity that do not put a few Black people against other Black people but create an ecosystem where the community, as a whole, comes together in resilience.

“To me we are the most beautiful creatures in the whole world…Black people. I mean that in every sense,” Simone says in the film which shies away from becoming a temple to the woman’s never-ending talents. And it is this beauty that we need to talk about when we talk about Black women who sing, and dance, and write, and teach us to live.

“So love your neck; put a hand on it, grace it, stroke it and hold it up. And all your inside parts that they’d just as soon slop for hogs, you got to love them. The dark, dark liver- love it, love it, and the beat and beating heart, love that too. More than eyes or feet. More than lungs that have yet to draw free air. More than your life-holding womb and your life-giving private parts, hear me now, love your heart. For this is the prize.”