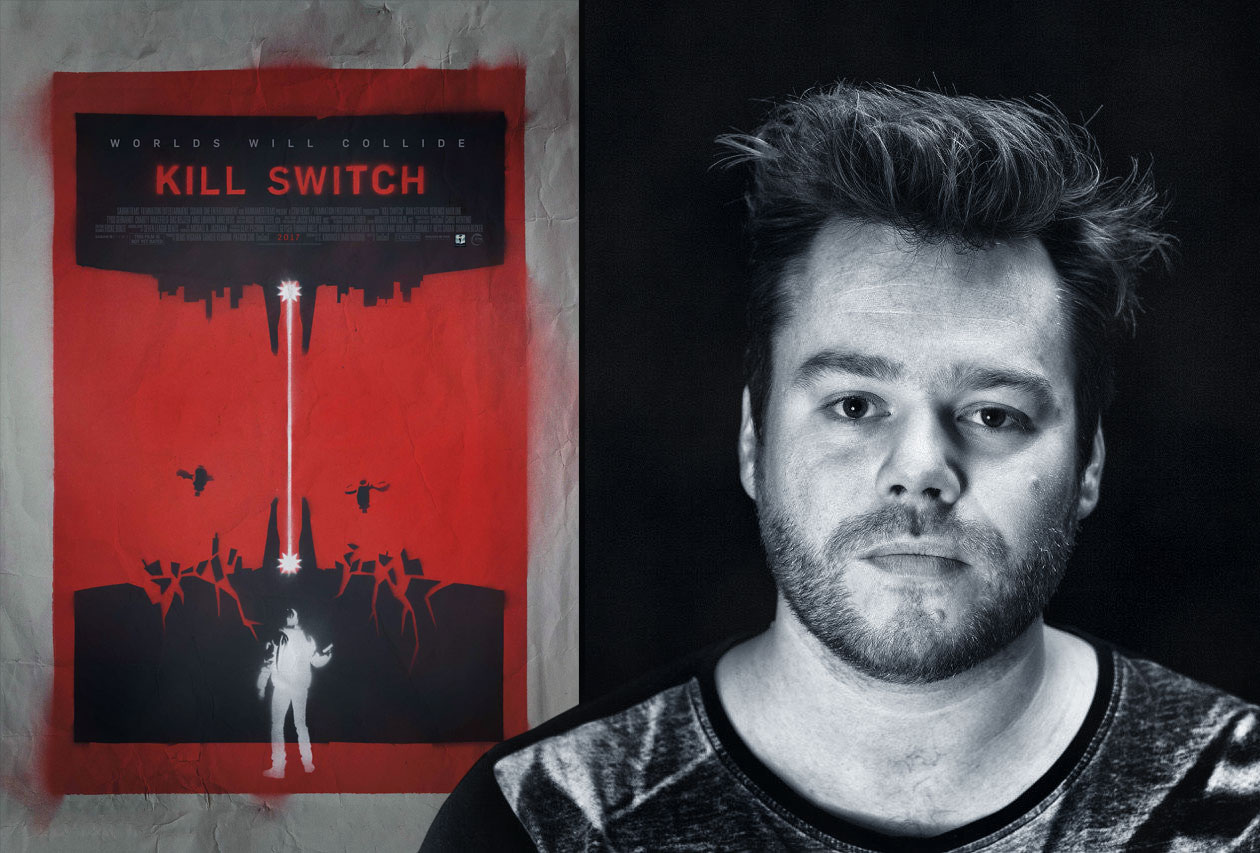 “A few weeks ago, my mother reminded me of my cinematic aspirations, that it’s something I’ve wanted to do since I was twelve years old,” the composer, Rob Peters (The Netherlands, 1987), joyously relays to me. We’re seated at the usual spot in In De Buurt, a bar in Zwolle. Our bar. It was too early for the bar to be crowded and also too early for us to be drinking, but the upside and downside of knowing the bartender is that you’ll never be without a beverage. Peters and I had met through a mutual friend a few months ago, right around the time he was finishing up his latest project, the science fiction film Kill Switch (2017).

Kill Switch was directed by Tim Smit, and the logical successor of Smit’s short film What’s in the Box (2009) which currently has 2,6 million views on YouTube. After the film went viral in 2009, Smit worked hard to further develop the themes and world explored in his original short, and eventually got the chance to turn it into a feature film 8 years later. Late into the production, Peters and his partner, Dries Bijlsma, were pulled on board to give Kill Switch its score. I got curious about their involvement and so I sat him down to get a detailed account of what this process is like for a composer. But first, some context. Peters must have been sixteen or seventeen when he heard the infamous Amen Break, a 7-second drum solo from The Winstons’ Amen, Brother, for the first time. Musicians from the late 80s would isolate the drum solo and re-appropriate it in their own music, using its energetic quality to spark an onslaught of new electronic genres like Hip Hop, Jungle and Rave. It was the mid-2000s by the time Peters heard it, and at that moment he decided to quit playing guitar in bands, and focus on producing music.

He met Dries Bijlsma a few years later, bonding over drum ‘n bass and hip hop, and promptly deciding to team up as Seven League Beats. Shortly after, they joined the Fakkelteitgroep, a collective of producers and rappers situated in the small city of Zwolle, with whom they would collaborate on many occasions. But their big national break came with Typhoon’s second record Lobi Da Basi in 2014, which garnered critical as well as public acclaim, reaching a gold status in 2015. They continued working within the realm of pop music and theatre, but Peters had different dream. “I used to read a ton of books,” he continues, “I would go to the library to borrow the maximum allowed amount of books, which you get to keep with you for three weeks, but I usually would come back within the week for more. When I got a little older this evolved into watching films and TV shows.” Peters has always loved experiencing stories, and wanted to apply his musical vision to these stories. He was commissioned a bunch of corporate video projects, mixing and mastering the sound, while also working with animator, Douwe Dijkstra, on a few short films as a composer and sound designer. “Working with Douwe Dijkstra was very different from working on Kill Switch,” Peters notes, “With Démontable (2014) for instance, we were there from the very beginning, seeing every part of the story click into place. Kill Switch was basically done when we came on board.” A still from Demontablé (2014), a film by Douwe Dijkstra.

Peters recounts how they ‘got the job’. “Our publisher heard of this Dutch science-fiction epic being made and told us we should apply for it as composers. Now, from what I’ve heard, there was a ton of competition, so I knew I needed to bring my everything.” They were sent a single scene from the film to work on their pitch. “We also met for coffee once,” Peters mentions, “And he told us about what he’d love to hear, like The Social Network soundtrack, the composer Hans Zimmer and the band M83, most of which are also my personal favourites, so that did definitely help with the process.” And it had to, because from the moment they heard Seven League Beats was the chosen one they had a mere month to finish their work. “We first sat down with the director to watch the film and take notes. For instance, Tim doesn’t like throwing a bunch of violins at the audience to dictate them how to feel, so we needed to come up with other instruments or techniques that’d work in an emotional scene. Some tracks had to be on target on the first try, or we wouldn’t have made the deadline. We sometimes didn’t even have time to consult with the sound designers, who are working in the same realm we’re working in, so most of the time we had to hope for the best.”

Ordering another beer, Peters mentions that he was ecstatic the version of the edit they received hardly used any temp-music. A lot of film projects which are in development use temporary music to paint the scene in a correct light, but this generally is considered a practice that inhibits the composers. “The absence of temp meant that we could come up with our own music on our own terms, without our or the director’s judgement being clouded by existing music.” But despite the strict deadline, the duo finished in time, and by the time it hit January, Peters and Bijlsma were seated in a cinema, amongst the crew and producers to watch Kill Switch. “The opening scene works really well, so I’m obviously happy with that, although it was super scary to have everyone, including a lot of people we didn’t know, see and hear it. But in the end, the music here is in service of the film. We made sure the universe Tim Smit had in his mind came that extra bit more alive. I mean, this bar wouldn’t inherently change if you’d hang up different lights, but your experience would differ a lot. It’s not wallpaper, but it is atmosphere.”

Rob Peters and myself are four beers into our conversation, and the air smells of anticipation. When the bartender sets up his iPad, we suddenly realise the bar is mostly empty because of an important football match. Someone outside mentions how another bar had set up their flat-screen television outside, but how the crowd had grown too big to actually enjoy the match. I turn back to our conversation and ask Peter what’s next for Seven League Beats. “Well, I try to make something new everyday, regardless of genre or jobs. We’re always talking to producers and directors, and keeping our ears to the ground. I’m very happy that we got this opportunity, to compose music for Kill Switch, and I really hope that once the film is released, it’ll open more doors for us in that avenue. But for now we’re currently in the midst of starting on the production of a new pop-record and touring with Typhoon.”

Peters takes the final gulp of his drink and then, right before we are interrupted by some old friends of his, he seems to remember something, turns to me and says: “The one song I am super happy with is the theme for the bad guys. I would not change a damn thing about that.”

The Kill Switch Original Motion Picture Soundtrack is now purchasable via iTunes, or stream the full album via Spotify.

This Interviews article was published in July 2017