‘I’m a punk dada baby!’: In conversation with Bruce LaBruce 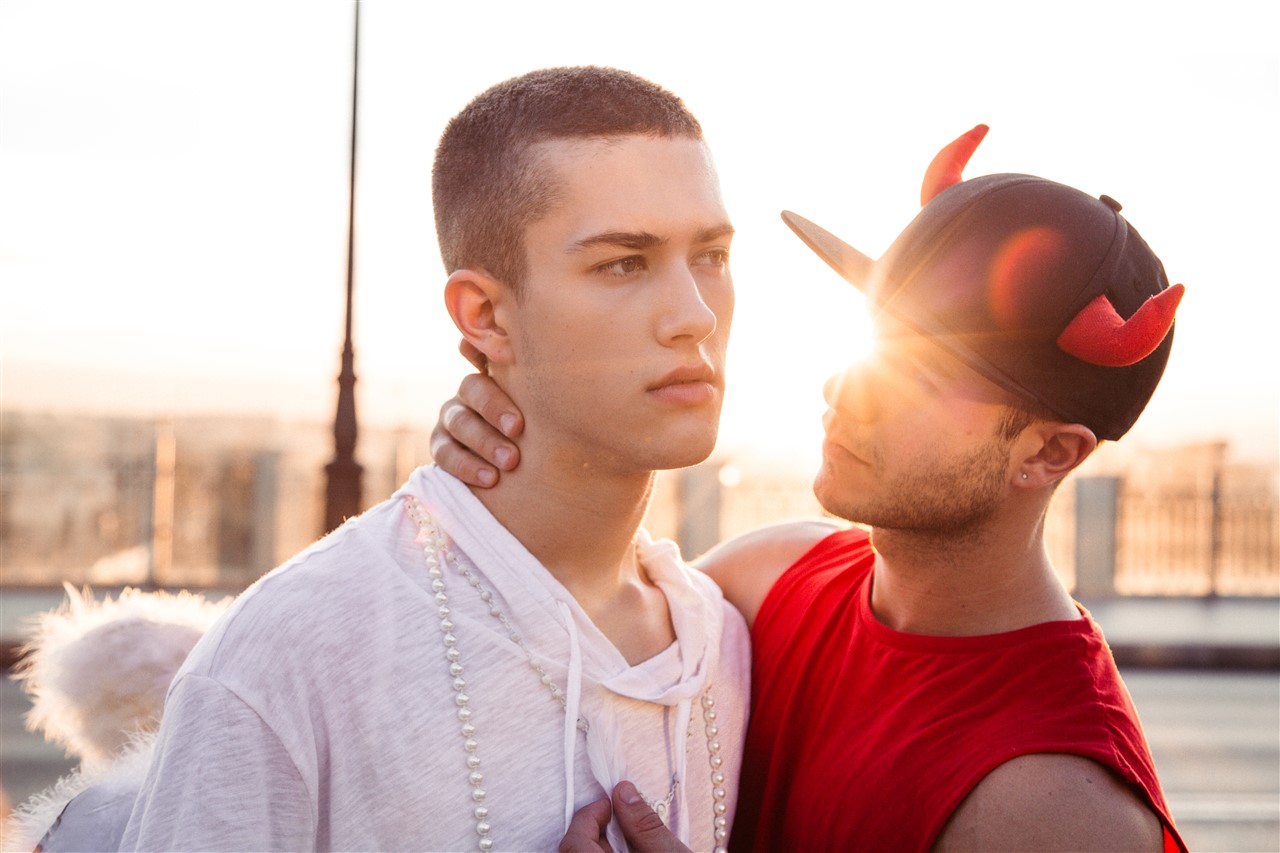 It is not the Pornographer that is Perverse (2018)

Past November, East London was taken over by Fringe! Queer Film and Arts Festival. This yearly celebration of LGBTIQA+ cinema, art, sexuality and diversity started back in 2011. Now, seven years later, ten galleries, cinemas and pop-up venues take part in the screenings of over 20 shorts and films, exhibitions, performances, panel discussions and several workshops (ranging from workshops on how to spank to how to make your own zine).

One of the films that was part of the 2018 programme and that particularly caught my attention, was Bruce LaBruce’s newest film It is not the Pornographer that is Perverse (2018). The title is a reference to the infamous Rosa Von Praunheim film It Is Not the Homosexual that is Perverse but the Society in which He Lives (1971). With his film, LaBruce wanted to ‘direct the same kind of concept toward the issue of pornographers and pornography.’

The Canadian Bruce LaBruce is first and foremost an artist, who created Queercore during the 1980s and was part of the New Queer Cinema movement of the 1980s and 1990s in America. An artist who is best known for kicking sacred cows and the shock factor in his cinema, as he ‘always believed in shock value and provocation for its own sake. Terrorizing people in artistic terms has always been part of my credo.’ I interviewed LaBruce from London, while he was still in Canada.

Sofie Maas: What is the meaning of the title you have chosen for your newest film, It is not the Pornographer that is Perverse?

Bruce LaBruce: As a popular medium, pornography is merely a  reflection of the sexuality of a culture, a kind of subconscious interpretation of how sexuality is negotiated within a specific culture. There is a strange misconception that pornography just appears out of nowhere, or that it is made by some kind of evil cadre of perverts who foist it upon an unsuspecting and innocent public. It’s more accurate to see it as a representation of the popular sexual imagination, something that pornographers are attuned to and represent in a variety of ways. In this way, it serves the necessary function of allowing a culture to express its sexuality and its subconscious desires as fantasy, no matter how dark or politically incorrect. It is a playful zone that allows us to work out these fantasies so that we don’t become sexually repressed, which is important because sexual repression often leads to terrible things like authoritarianism and sexual violence. I believe all pornographers are artists of sorts, some good, some bad, that interpret culture through a sexual lens, often through the use of narratives and tropes. People often look down their noses at pornographers, but I think they can as easily be seen as necessary and valid for a healthy sexual culture.

Has pornography radically changed since the invention of internet?

In your newest film It is not the Pornographer that is Perverse, the first of your four stories Diablo in Madrid, depicts the troubled relation between the angel and the devil; the everlasting struggle between good and evil. Does this struggle, in a way, represent the repressed sexuality that exists in this world (as societies are still struggling with repressed sexuality, extreme violence against women and the LGBTQ+ community on a daily basis)?

I don’t know if I would attribute such lofty ambitions to Diablo in Madrid. It’s really meant to be rather light-hearted and playful. But then again, it is inspired by Pasolini’s short film La Terre vista dalla Luna (1967), so I guess it does address some arguably profound universal sexual themes. Many, if not most, of my movies contain sexual scenes in cemeteries, a constant reminder of the inextricable relationship between sex and death posited by Freud and many others.  The graveyard is also a site where sexuality is taboo, where sexual impulses are supposed to be repressed in favour of mourning and contemplation, a place where decorum and dignity are to be maintained at all costs, so it’s enticing for those who are seduced by the forbidden and the taboo. In Diablo in Madrid, the devil emerges from the underground to seduce male mourners and have sex with them even as they cry for their departed loved ones. We shot it in the Cementerio de Nuestra Senora de La Almudena, one of the largest cemeteries in Western Europe. It was kind of an overwhelming location, a vast bone orchard with graves as far as the eye could see. There was also no one around and little supervision, so we had a lot of room to play in. The whimsical point of the film is that the innocent angel gives into the aggressive sexual advances of the sexy little devil, who cares little for sexual propriety or proper behaviour. He is even shown seducing a young man who is at the cemetery mourning the death of his homosexual husband,  a cheeky jab at the new conservative institution of gay marriage, one of my pet peeves. At the end of the story, the angel and the devil appear to be boyfriends and equals as the devil leads him through the passage to hell. It’s a nod to the universal perception that still persists about homosexuality being the work of the devil, as if to say if you want us to be the devil, we will be, but we are going to be really sexy and have a lot of fun while we’re doing it!

Religion and the traditions of the patriarchal society have taught society to think about sexuality as something obscene and vulgar and to think of homosexuality as something that has to be discouraged and that is a disease that needs to be treated. Your story ends with the devil persuading the angel, ‘curing’ him of his ‘heterosexuality’ in a way. What was the message behind that story?

Oh gee, in my mind the angel is already gay at the beginning! After all, he is played by the ultra-cute and innocent-looking Sean Ford, and no boy that cute and creamy-complexioned could be straight! lol. Allen King, who plays the devil, is also terribly cute, so they really are a match made in heaven, but going to hell! The message of the film is simple – that the social and cultural restrictions and regulations placed on sexuality – how you’re supposed to behave sexually, how you’re supposed to conduct yourself publicly, are all artificially imposed, and sexual desire can actually disrupt these conventions at any given moment. Of course, the fact that it takes place in a famous Catholic cemetery, and the fact that Catholicism in particular has traditionally repressed homosexuality with catastrophic results (the most obvious example being the seemingly universal priest sex scandals), cannot be ignored.

Sam Steverlynck mentions in his article The Art of the Peepshow in EXTRA EXTRA Nouveau Magazine Erotique, that ‘Art, and more specifically cinema, is a reflection of reality. It is often linked to the metaphor of Plato’s allegory of the cave, the image that the Greek philosopher chose to evoke our restricted view of reality’. Do you think that is true?

Cinema is obviously very conducive to Plato’s Cave metaphor because of the way we view it. When we watch a movie in the theatre we are in a sense “chained” to our seats, being forced to look straight ahead at the screen, and what we see is a mediated projection coming from behind us. The metaphor is apt in some ways – cinema is the most propagandistic and illusory of art forms, a medium that in a sense hypnotizes us with a false presentation of reality. It may look real, because of the verisimilitude of film, but it is actually a very carefully constructed and manipulated representation of reality. But cinema has many other aspects as well. It is projected on a screen, and as such it encourages us to project ourselves, in a Freudian sense – our own experiences and emotions and desires – onto whatever is shown on the screen. Particularly in the days of film projection, the flickering of the film also created a kind of hypnotic effect, a manipulation of the brain waves that put us into a passive or receptive state. When you add porn to the equation, it’s doubly pacifying and seductive because the pure visual pleasure is compounded by the arousal caused by the explicit sexual imagery. That’s why I always say porn is the perfect medium for propaganda, and that’s exactly how I use it!

Your work really reminded me of Dada in a way, because of your radicalism and because you started as a filmmaker creating Queercore, a radical queer movement that was initially not a movement. Was this inspired by Dada, an art movement that was initially a revolt against the established and traditional art and refused to become another ‘ism’ or artistic/academic movement?

I’ve always related strongly to the Dada movement and surrealism, but I don’t think that’s what I was consciously trying to emulate with queercore. I’ve always had a certain absurdist sensibility, and in fact I tend to view the world in general as absurd, a point of view that has become increasingly useful as civilization – ahem – “progresses.” But yes, for me queercore, and punk in general, has a lot in common with the Dadaist sensibility.

Dada was an artistic revolt against art. Is that what you tried to do with Queercore and your cinema?

Dada was a reaction against war and all the political corruption and blind nationalism leading up to the First World War. American punk was a reaction against Reagan and the Cold War and war-mongering and the rise of conservatism and nationalism, and queercore was part of that larger countercultural movement. Dada was also against the hypocrisy and conventionality of bourgeois culture and art, and it also had a kind of childish sense of revolt against those tendencies, so I always related strongly to that.

I believe it was Hans Richter who wrote in his book Dada Art and Anti-Art: ‘To outrage public opinion was a basic principle of Dada. […] The devising and raising of public hell was an essential function of any Dada movement, whether its goal was pro-art, non-art or anti-art. And when the public had developed immunity to one kind of poison, we had to think of another’. Do you recognize yourself in this quotation and is this something you try to achieve with your cinema as well? As you are known as a director that likes to kick sacred cows.

Yes, I definitely relate to those sentiments. I’ve always believed in shock value and provocation for their own sake. Terrorizing people in artistic terms has always been part of my credo. One playful strategy I’ve always had – which is also kind of childish – is to outdo myself, to play a game of one-upmanship with myself. So if I had a scene in one movie that shocked and outraged some people, I would try to come up with a scene in my new movie that would go even further, to push the boundaries of acceptability as far as I could. I would even try to shock myself. If I had the feeling while making a movie that I had gone too far even for myself, I figured I was going in the right direction. I’ve also always tried to do the unexpected. So I made L.A. Zombie (2010), a gorn movie with necrophiliac scenes that was full of splatter, gore, and explicit sex, and I followed it up with Gerontophilia (2013), an almost mainstream movie by comparison (my first with no explicit sex scenes!) that was a romantic comedy of sorts – even though it was about an 18-year-old boy with a sexual fetish for the elderly. So yes, I’m a punk Dada baby!

This Interviews article was published in December 2018