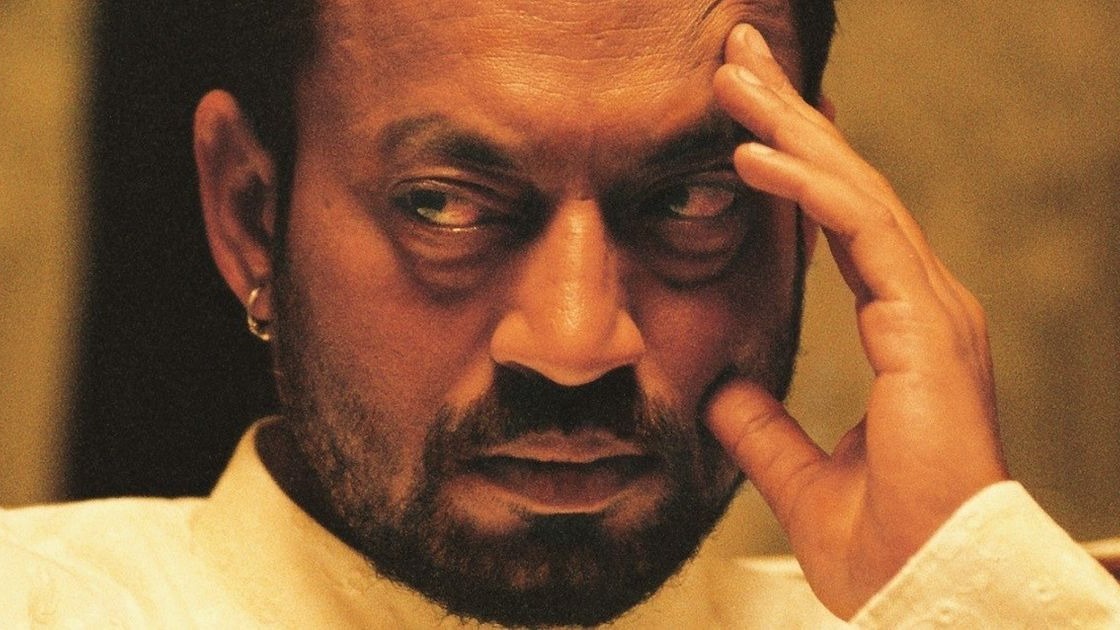 Irrfan Khan past away last week. The Indian actor left an indelible impression on us at Frameland. Which is why four of us decided to think back on some of our favourite roles he played, and just why Khan meant so much to us and the world of cinema.

“He looks like someone who’s killed a lot of people, but feels really bad about it.”

This was filmmaker Asif Kapadia’s first impression of Irrfan Khan. He was casting for his debut film The Warrior in India and Khan, a bored actor who was thinking of giving up acting, had turned up for the audition. For fans of Kapadia and Khan, the film is a miracle that they can never be grateful enough for.

Kapadia’s film, as beautiful as it is on-screen, is special because most of the action happens off-screen. On screen, it’s just Khan’s Lafcadia reacting to things that we don’t see. He is the protagonist of this story but also the narrator. His eyes guide us through what we don’t see and adds magic to what we do.

A film made about a violent, feudal, sword-swishing, turbaned warrior, released in 2002, has all the ingredients to appear ridiculous but Irrfan Khan’s agility, both in his limbs and eyes, makes The Warrior appear as contemporary as ever. He has a presence that makes the audience want to drop every conviction and believe him. When Lafcadia is on a rampage and killing innocents, we believe in his brutality and when he surrenders his sword and gives up his life of violence, we are equally taken in by the transformation.

Khan went on to work with filmmakers like Danny Boyle, Wes Anderson, and Ang Lee, often in films that did not deserve his simmering genius. But in every frame he has been in, for every second in it, he has been the most genuine and the most trusted actor there ever has been.

Tigmanshu Dhulia’s Paan Singh Tomar (2012) gives an interesting twist to the sports biopic. Which is entirely due to Paan Singh Tomar’s extraordinary life itself. He was an athlete who set new national records as a track runner and won a gold medal for the steeple chase. But he only gained fame when he was forced to become a dacoit (bandit, or ‘rebel’ according to himself) in later life. A large part of why this mixture of sports biopic and crime film works, is of course Irrfan Khan’s lead performance in the title role.

Only credited as Irrfan here, he has plenty of dialogue but lets his eyes do most of the real talking. Nowhere is this more evident than in his introduction scene. In the opening sequence of the film, a journalist goes through a whole rigmarole to interview a notorious bandit, at an undisclosed location. Of course, this turns out to be Irrfan, and he gets a real ‘hero’ introduction, complete with dramatic music and close-ups of body parts. The key shot here is that of his eyes. All the pride, achievement, perseverance, pain, frustration, violence, vengeance and trauma that is to come in the next 135 minutes or so, it’s all already there in his eyes. Which is not to say the rest of his performance isn’t great or that film that follows isn’t good, including some more wonderful eye acting. But in that one moment, he tells us the whole story that’s to come with just his eyes.

Irrfan Khan’s voice is what I most remember about the venerable actor who passed away too early (age 53) just last week. It was soft and nearly one-note, almost deceptively so because on screen it could display everything from compassion to evil. It’s in Anup Singh’s Qissa where Irrfan’s ability to deceive and incur a shocking range of emotions hit hardest. I’ll never forget the scene, where his ruthless patriarchal character Umber Singh holds his daughter up, his fourth, and declares, in a pathetic act of gaslighting himself and his wife, that she is actually a boy. “Mere bete” (My son) he keeps repeating in that soft, quivering voice Irrfan’s characters had.

I know it’s the film where I decidedly declared upon watching it that Irrfan Khan was the single best Indian actor of the 21st century, possibly the most talented actor Hindi cinema has seen since peak Om Puri in the 80s. From a short debut in Salaam Bombay (1988), to years of struggling to stay afloat, Irrfan Khan found his footing in the industry. An industry, which revels in its materialism and prides in how many talented performers it relegates to side-character roles in favour of emotionless robots who just happen to have family connections and look like perfume commercial models, decided to give this man a chance. We will see, now after his passing, if they understand who they had was special and why he was special.

Irrfan Khan’s role as Mister Fernandes in The Lunchbox is considered to be one of the best acting performances of his career. He plays Fernandes as a grumpy man who has been working at the same claims department for 35 years and is about to retire. He is not interested in his replacement, the enthusiastic young man Mister Shaikh (Nawazuddin Siddiqui), and he sends the children playing in front of his house away.

However, Mister Fernandes is not just a grumpy man with an inquisitive gaze. Through his small conversations with Shaikh and the letters he writes to Ila (Nimrat Kaur), whose lunchboxes he accidentally receives, we get to know Fernandes better little by little. He appears to be very lonely since his wife has passed away. Moreover, he is willing to help Shaikh with his issues both at work and in his private life.

Last but not least, Fernandes gets obsessed with the lunchboxes. His lunch breaks become the happiest moments of his daily life and cause a transition in his character. A huge development which is presented in a very minimalistic way through a very subtle smile. The way of acting Irrfan Kahn was known for.