In Search of Human Connections at the IFFR 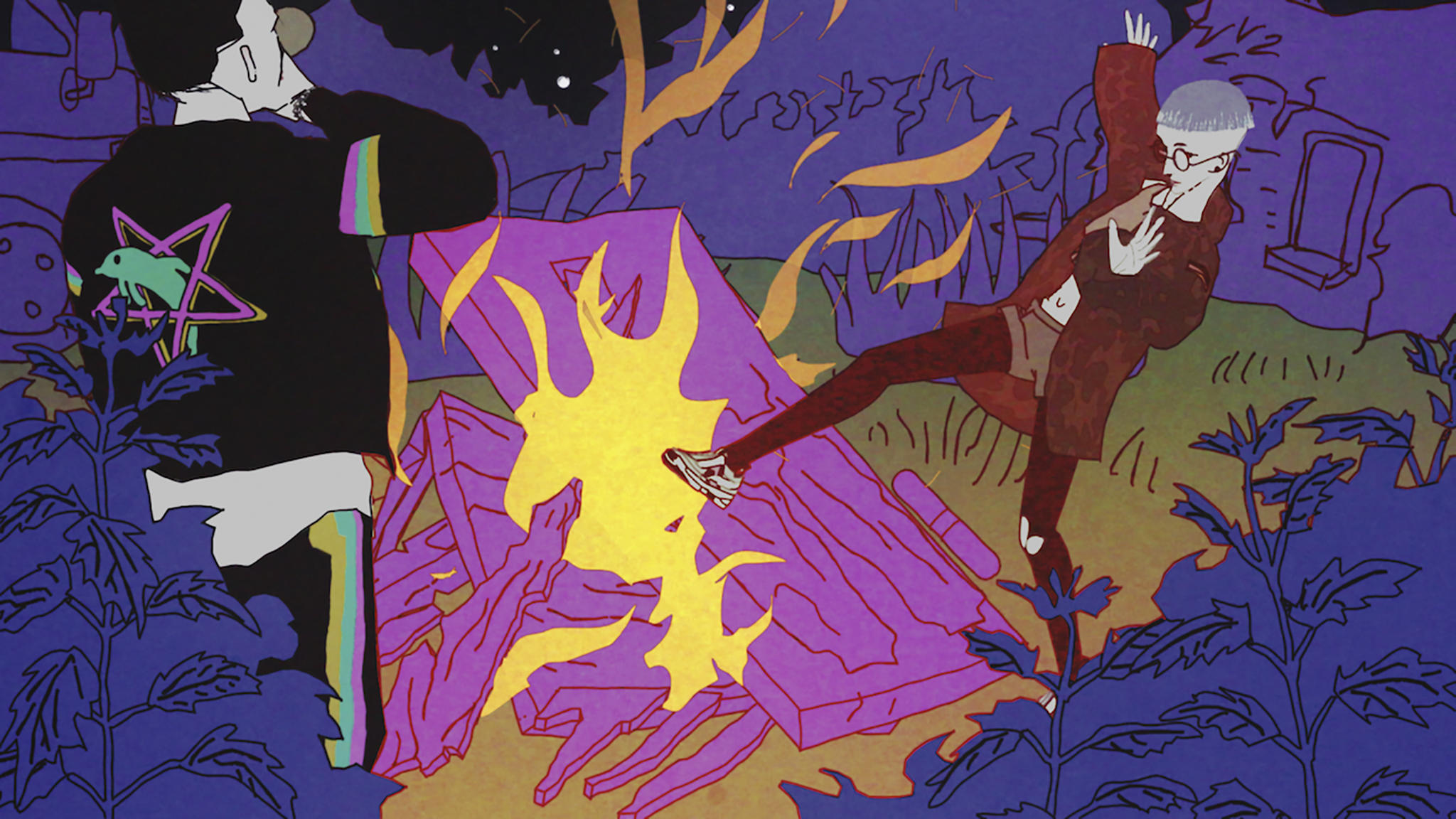 In recent years I’ve noticed that the most interesting things, may it be the subjects or the way they’re tackled, happen on the periphery of the International Film Festival Rotterdam: the short film programmes. Short in duration, not in ambition, these voices chime in with their unique takes on humanity: some younger from uncharted territories, others established names forever traversing the avant-garde. Every year I try my best to seek out those unheard by the larger audience: The type of films I know I won’t be able to see anywhere else, for better or for worse.

Tomek Popakul’s Acid Rain (2018) oozes with poisonous purples, the crudely drawn backdrop presents us with an almost apocalyptic vision of Poland. In it wanders a young buck-toothed girl followed by her large backpack, perpetually searching for a way out, it seems. She meets Skinny, a petty drug-dealer, a few years her senior, and they quickly form a platonic bond. He can take her away in his camper, she makes his life of solitude a little less boring. But as disappointment lurks around every corner her hope for escape crumbles. And then there’s the unique blend of motion capture 3D-graphics and PlayStation-era choppiness (arms clipping through bodies, perspectives distorted, smooth animations glitching out, etc.) which shapes itself in unsuspectedly eerie yet fitting ways in tandem with the story. Think A Scanner Darkly through David O’Reilly via the thumping distortions of Demdike Stare or Andy Stott, all drenched in purple. Maria by the Sea by Tawfiq Nizamidin

With Maria by the Sea (2018), Tawfiq Nizamidin tries something thematically similar, though visually more in the realm of Hong Sang-soo. It starts refreshingly enough: a male voice relates his reason for being late to his date, while we’re shown moments from his tardiness in black and white still frames. But where director/writer Popakul deftly evades Acid Rain from becoming a preachy morality tale about how the girl should’ve just stayed at home, Nizamidin utilises the Hongian merely in shape as he pits his dates against each other. Man versus woman in a battle of ideologies. As the conversation goes on, it increasingly becomes an angrily written manifesto or a reconnaissance mission. It does more harm than good, as the preachiness undercuts its empathy and therefore its humanity. Then it sadly no longer matters what is being said as the shape makes whatever the message is as flat as badly written exposition.

A better choice would’ve been to let the characters speak through things unsaid and actions performed. Cecilia Kang succeeds tenfold in this regard. Her film Bicycles (2018) is uninterested in narrative, but summons its cohesion through theme and character. In this case, it’s the young filmmaker Lila procrastinating while a deadline looms over her, though Kang doesn’t care much for the deadline. From the moment her partner goes to work (after a goodbye-scene which mirrored my own from this morning so much it made me do a backflip) she does nothing but watching cat-videos, applying make-up, writing and backspacing, masturbating, and other harder to describe activities. The whole thing plays out in deceptively simple compositions, which not only show the characters, but also how they move through their own environments. Later that day, Lila’s partner returns from work with a new bike-lock. He had received this from the same ‘cute girl’ who saw him break his old lock. And this is where the film shines: Lila, fuelled by frustration with her own unproductively projected as jealousy and dressed in her going-out garb with a full-face of make-up, announces she’ll be away for the night in a, which leaves her boyfriend slightly confused before returning to his book. It doesn’t call attention to itself by way of shouting match nor is it preceded by a montage of angrily making her face. Kang expects you to put one and one together, because this is the kind of stuff we as humans know and live through on a daily basis. And if we don’t get it, it’s fine, because we can’t always expect to understand the other’s actions.

If all this may sound slight or simple, and well, it kind of is, but only because life is slight and simple sometimes. Film doesn’t have any obligation to portray reality or to visualise our wildest dreams, but observing a mundane situation as simple as this without passing judgment or delving into exposition is incredibly admirable.

It would be easy to then attribute the relationships presented in these films to the countries from whence they came (respectively Poland, South Korea via Uyghurs and Argentina). Or looking at it thematically, we do see there’s a heightened interest in gender roles and the portrayal of women. But these are mere peddles in a pond. What we can gather though is that cinema is still utilised as a tool to make sense of ourselves, to hypothesise and critique, and to find a connection, may it be lasting or as fleeting as the screening of a short film at a film festival.

This International Film Festival Rotterdam article was published in February 2019