In the web of present time 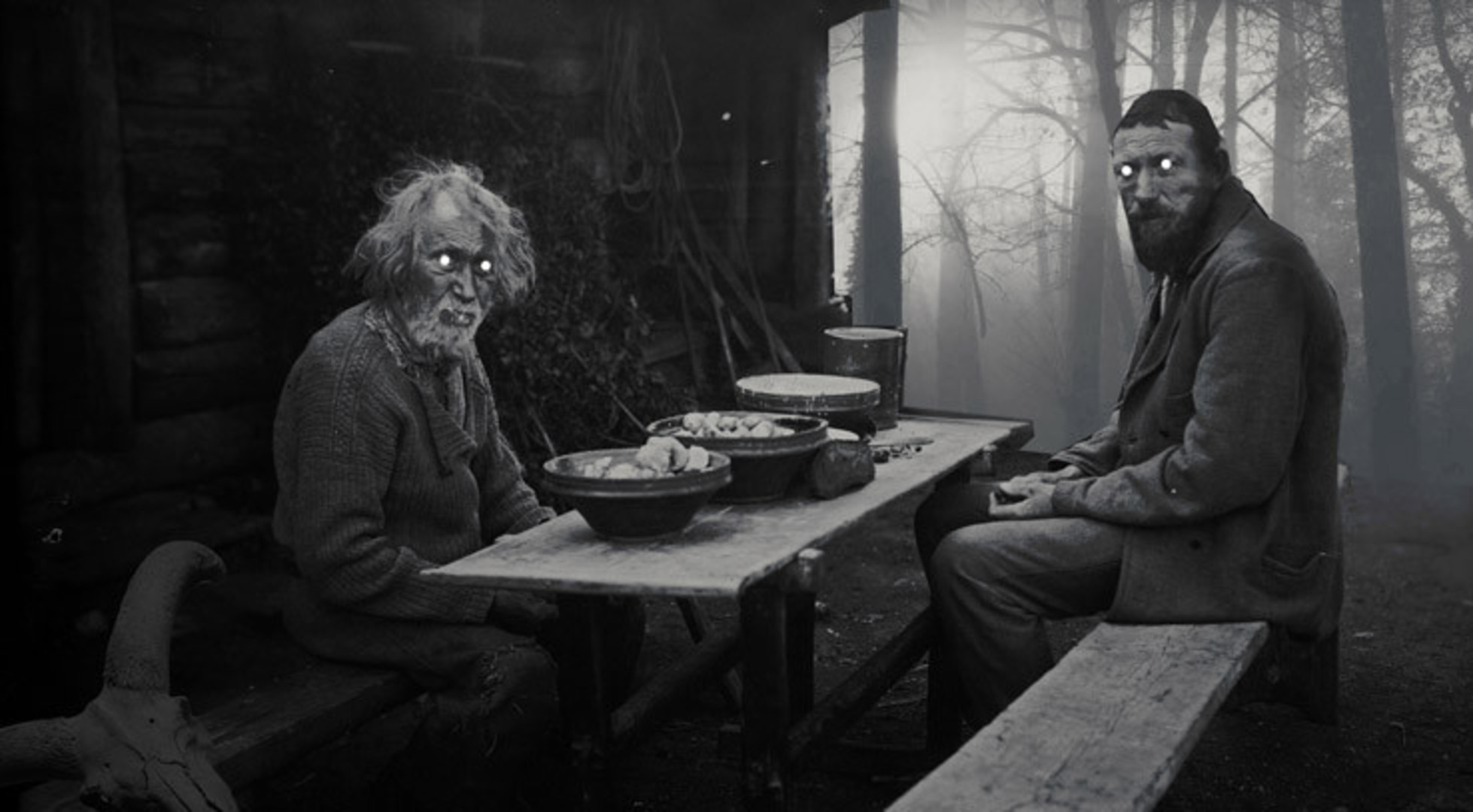 Once more I found myself distracted. I had thought to write about a new movie (my first mistake given my current disposition) in the hope of shedding light on work that would otherwise have grown cobwebbed and “even the most ancient things lie in the web of present time,” as I would learn. The film was November (2017) by mad Estonian Rainer Sarnet. The description was tantalizing, something about a black metal fable, and lord knows I’m the target audience for such a thing. I’ve even made a list. So yes bring on the apparitions and the fog and the flicker, the possessed peasants, and incestuous aristocrats. The stuff from which dreams are made.

Ten seconds go by before a farmer’s tool, given life by a spell, strangles a cow and lifts it 50 feet in the air before crashing into a tree. The tool demands a purpose from the farmer before it explodes. The kookiness is here to stay. The issue with metal cinema is one cannot set out to make it, it must find you. It’s the difference between Justin Kurzel’s Macbeth (2015) and his predictably dour follow-up Assassin’s Creed (2016). One was Shakespeare rent into a doom metal walk-about, the other was a bunch of 7 string guitars playing alongside middle eastern strings aiming for Om or Soulfly. Embarrassingly there. Macbeth starts honorably: the bard. Assassin’s Creed is a blessed video game. You can’t turn it into a metal video, it’s already in the same aesthetic ballpark, it’s like pressing a pound of lo-mein flat to make lasagna. I appreciated about 40% of November. Sarnet wisely shot in black and white and has won awards for this decision, filming rivers and snow-covered hills to make up for a lack of purpose. He was right to do it and I was happy to look at the result of this decision. It was the silliness papering over its empty core that I found objectionable, or at least tiresome. The talking murder wheel was quite a lot already, then the scatological humour arrives, along with Human Centipede alum Dieter Laser as a count who late in the film dresses like Elvis Presley. He’s at least appreciably human here, but his casting is a stunt pure and simple. We all know where we know him, so we’ve got shit on the brain whether we want to or not. That is, as they say, a choice. Too little of the film could only have come from Sarnet’s visual imagination, and too little means more than the fleeting pleasure of its contours. A pile of orgy-ing farmers is cut off by an intruding voice telling them all to stop and they oblige. That’s how the whole film works. You get 8 or 9 seconds of something stunning, immediately throttled by the next thing. Nothing builds. That kind of rhythm is tough to sustain if you’re out to say something, and I don’t know that Sarnet is. He has Laser’s Redmond Presley play “Moonlight Sonata” on the piano about halfway through while his servants watch. That is not, as they say, a choice. That’s a gambit to fill time and a mistake because reality has no business in a fable. I’d have preferred feeling as though the film were arriving anywhere as interesting as its best images. It hasn’t the confidence of similarly pitched psychotropic movies like Embrace of the Serpent (2015) or A Field in England (2013). I wanted November to believe it had to exist. I believe Sarnet had faith in his images, but that each one buys him one more second he doesn’t have to connect them. Unfortunately for Sarnet, I knew what film he was aping, with his wide-eyed blonde heroine and his black and white snowscapes (it isn’t Tony Richardson’s Mademoiselle (1966), though I was grateful for the accidental echo). There’s a touch of Otakar Vávra’s Witchhammer (1970) but the backbone is František Vláčil’s Marketa Lazarová (1967), the crowning aesthetic achievement of Czech cinema. Fellow Framelander Tanner Tafelski would pledge his metal to mine on that score. The sound design is enormous, swallowing those vast ancient peaks and castles, history itself, maybe. Cobbled together from various folk tales and historical accounts, it’s the kind of patchwork cinema was built for. Like Aleksei Fedorchenko’s Celestial Wives of the Meadow Mari (2012) or Jia Zhangke’s A Touch of Sin (2012), stories like this, snaking through perspectives with only bone deep emotion and razor-sharp callousness as a constant, simply work better on film. Absent a confident pen, a collection of written stories has only theme to link them, which can take a whole story. Prose may link them in writing, but each cries out to be taken on its own merit. Joyce’s The Dubliners is rule and exception. You want a minute after each has concluded to bask in the wash of yellow nostalgia and soot-strewn hearths. They’re of a piece and but for The Dead inseparable, but the brain pulls them apart while it reads each new chapter. In cinema, the brain keeps every piece together. The effect is of a journey down river, each mile visible behind you if you cared to look back. In the case of Lazarová, you simply don’t.

The film takes pieces of an uncertain and deliberately vague group of occurrences and makes them clear as day. As if history is haunting every frame, turning myth into figures of lone warriors standing on hills of trash and bone clutching swords. These heroes, the sort that cinema favours, try to wedge themselves into historical narratives. History rejects them but cinema welcomes them. Time always rejects easy heroes and eventually turns them to cowards and murderers. Film preserves and loves a hero, especially if he’s a bastard. The last twenty years of gilded Hollywood nonsense says as much. But here everyone truly is evil, knowing that the consequences of every single thing they do will wreak some unspeakable havoc on the tiny plot of land joining the warring families.

In Lazarová, a kidnapped princess finds her new home to her liking after herculean trials and tribulations, including a violent assault. Vláčil makes no bones about the medieval rape and pillaging of its ‘heroes’. Everyone is a monster but Marketa (even her dark-haired witchy twin, eying her judgmentally). The rest are just men and we’ve still got plenty of those awful goddamn things running around. Practically weasels or stoats in Vláčil’s telling, running through snow and wheat for the next man to kill, the next woman to take as prize. The captive daughter tames their brutality, or at least directs it anew. Purpose emerges where once life was merely violence. The story of cinema, kinda, sorta. From the Lumières (beautiful incident) comes Méliès (stories and effects). The camera had a greater purpose: reflecting us and our thorny lives. Beautifully Vláčil frequently can’t decide whether to keep the camera still or to mess with the zoom lens and the focus ring, pinioned between incident and story. He himself seems awed by the feudal fireworks he’s accidentally conjured. The camera is always sure it’s meant to be there, but just as often it’s nodding vigorously like we are, just happy to have captured such things. The shifts in focus are subtle but powerful. Everyone is trying to stay informed but only we in the audience truly succeed in doing so. Deaths and maimings happen so casually, you could almost miss them. Almost.

The film is a marvel of dark, craggy faces against white skies and landscapes (and vice versa), splitting castles in half and charging across meaningless borders. Wolves roam around every empty corner of the world and a choir sings along to every development. Brueghel would be painting it, except he loved colour. The black and white is why it escapes into the reaches of the purely cinematic. No painter would have dared, nor would they have had the reverberating sound of history itself in those collected choir calls. Lazarová hums and chants, running at full gallop like the wolves stalking every idle man. Sounds drift in and out, merging atonal coarseness with heavenly respite. If only our horrific lives were this poetic anymore. This was called the best Czech film ever made, but that somehow doesn’t seem like enough. In the dark, moving through claustrophobic stone boundaries beyond torch lit battlefields into the unsettled minds of scheming charlatans, it can feel like the only film ever made. It knows it must exist and its spell is not easily broken.

This Essay article was published in February 2018