Jesus Experiments in The Wired 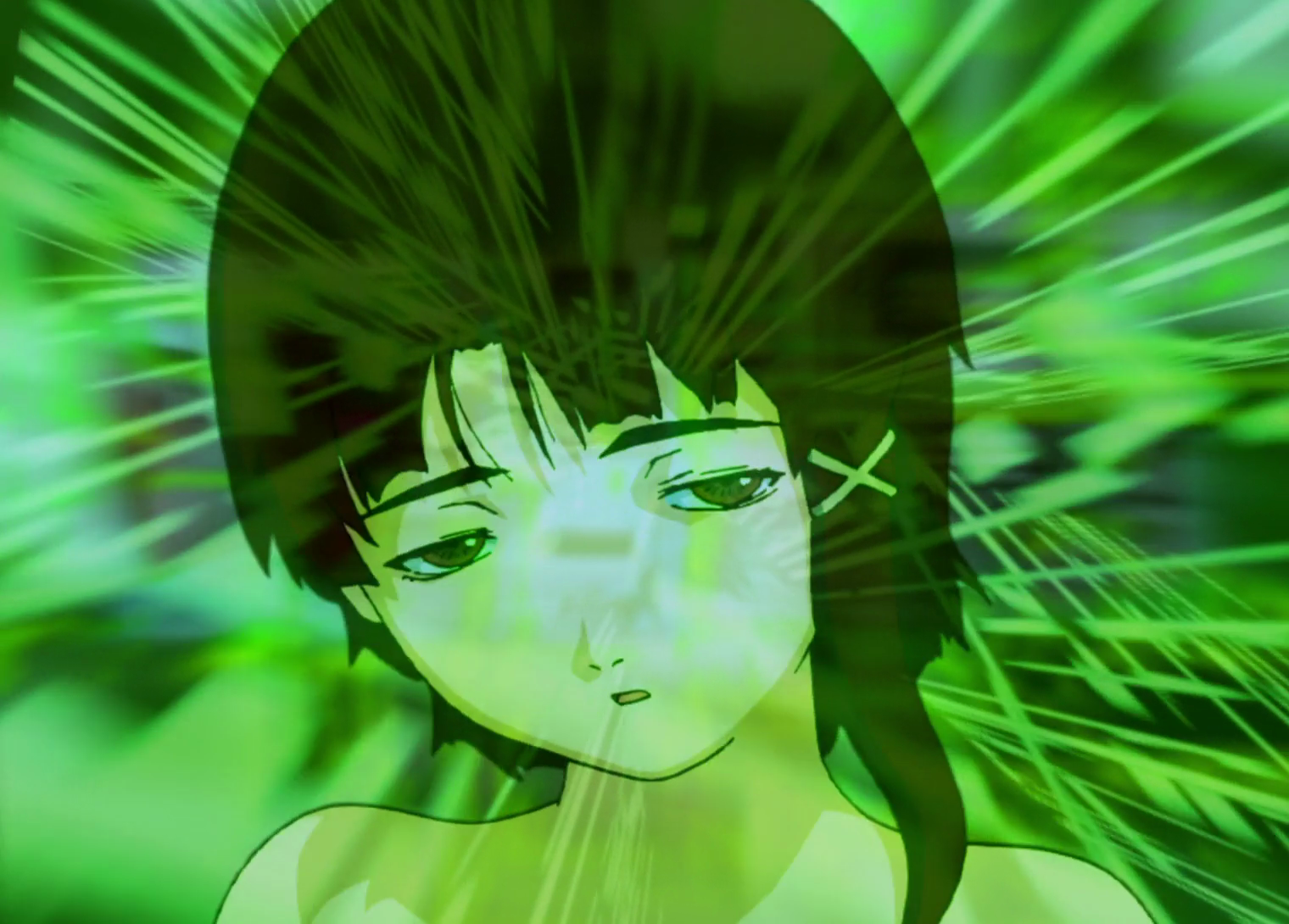 Serial Experiments Lain (1998) is a cyberpunk anime which follows the main character, Lain Iwakura, as she experiences a rather bizarre chain of events following the suicide of her classmate. The unfolding events ask thought-provoking questions regarding existence but in the context of a rapidly increasing tech-obsessed world. By slightly warping the concept of the Internet, which in the series is referred to as The Wired, the series asks how our interaction with one another will change. More importantly, the series asks how our very existence and relationship with ourselves will change as we become more dependent on The Wired, a question that seems more important to ask every day.

The series was created in the late 90s. The Internet had only very recently entered the mainstream. Emailing was still novel, as was text messaging, and with the proper aim and force, you could probably use the popular Nokia models of the time as a murder weapon. While in retrospect this seems like an almost primitive time, the world was abuzz with new technologies. And this is clearly observable in the film and television shows produced at the time. For a relative niche genre, the genre was booming during the 90s. From the earliest predecessors such as Blade Runner (1982), RoboCop (1987), Neo Tokyo (1987), and Akira (1988), the genre moved on to increasingly dark forecasts of humanity’s place in the brave new world, such as Ghost in the Shell (1995), eXistenZ (1999), and of course the mainstream cyberpunk hit, The Matrix (1999). The genre has delivered thousands of films, however, as the genre progresses, humanity’s position seems even more doomed and precarious than the previous decade’s predictions.

Enter Serial Experiments Lain. The series follows its main protagonist, Lain Iwakura, shortly after the death of a fellow classmate, Chisa Yomoda. Lain is immediately introduced as a painfully ordinary teenage girl, albeit shyer than the average girl. She lives with her middle-class family and keeps to herself.

Shortly after the death of Chisa Yomoda, Lain’s classmates become upset as the suicide victim has been sending emails to her classmates from beyond the grave. While most of her classmates shrug it off as a prank, Lain is fascinated. Lain admits that she hasn’t seen the email yet as she’s a self-proclaimed tech neophyte.

However, that same afternoon, Lain’s curiosity gets the best of her as she drags her dusty red PC closer to check the email.

What follows is nothing short of a surrealist, Alice-through-the-looking-glass, tech nightmare. Yomoda’s strange email to Lain piques her curiosity, and she tries to get behind the meaning of the email. She asks her computer-obsessed father for a new computer, and the imposing yet impressive shiny new machine slowly takes over Lain’s room and life.

The series offers a wealth of thought-provoking topics to discuss at length. But one thing that particularly caught my eye is the usage of the so-called Jesus narrative. While some could simply shrug and say that it’s simply the heroes journey running its course, there are too many parallels between Serial Experiments Lain, and the Christian Jesus narrative to be ignored.
To try and explain the concept of The Wired is perhaps impossible to those who have not yet seen the series, much less so to those unfamiliar with anime in general. Essentially, The Wired is not unlike the Internet, but it’s much more complex.

The Wired also essentially functions as a method of connecting people, but on a virtual reality basis. Everyday users can transform themselves on The Wired and connect with friends and strangers all over the world.

However, Lain’s own investigation soon reveals The Wired’s dark underlying history and conflicts. Masami Elri later reveals to have manipulated the code of Protocol Seven, which, according to him, made him God of The Wired. He went so far as to upload his consciousness to the virtual sphere, and exists only on the online platform.

If Elri, however, is God of The Wired then Lain is Jesus of The Wired.
The series has certain unmissable parallels with the common story of Jesus Christ. According to biblical myth, Jesus is the son of God, miraculously conceived by the Virgin Mary and her husband, Joseph. Lain, who later discovers to be the dividing line between reality and The Wired, is a product of Elri himself, and not born to her own parents.

The rest of the narrative is filled with Lain’s mixture of self-doubt and reluctance to take on the role of the Jesus figure. Elri himself, while proclaiming to be God, is an ambiguous figure, sometimes God, sometimes the devil. From episode one, Elri speaks to his protégé, Lain, much like Jesus proclaimed that his own heavenly father was constantly speaking to him.
However, later in the series, Elri turns into a decidedly more malicious character. When he and Lain engage in a long philosophical conversation regarding The Wired, Elri almost reminds one of Satan during the temptation of Christ.

The Jesus narrative comes to an interesting conclusion as the series ends. Once Lain realizes her power, she is reluctant to use it. While Lain could easily take her position as a deity within The Wired, she shrinks from the power to have that much control over people.

Eventually Lain decides that her best course of action would be to erase herself from everyone’s minds. An act which is equally self-sacrificing as Christ’s crucifixion, but is inherently different as this act was not her creator’s commands, but out of her own volition, and furthermore bore no witnesses.

The Bible was written at a revolutionary time. For centuries, countries relied upon it to keep order, churches were erected, which in turn helped the state keep order. In the last century, states have become somewhat more secular, but the Bible is likely to remain one of the most crucial blocks of Western history.

What strikes me is the interesting adaptation of the common Western narrative, but on Eastern terms, which shapes an entirely new narrative. One that raises questions about an equally revolutionary new concept to mankind: technology.

Serial Experiments Lain perhaps proves that humanity’s existence is becoming more and more precarious, as virtual reality technology becomes refined, and as our entire world order gradually shifts to the abstract and ambiguous online realm. Perhaps, decades from now, Serial Experiments Lain, would be regarded as a quaint parable or cautionary tale, much like the Bible has been considered in the centuries following its appearance.