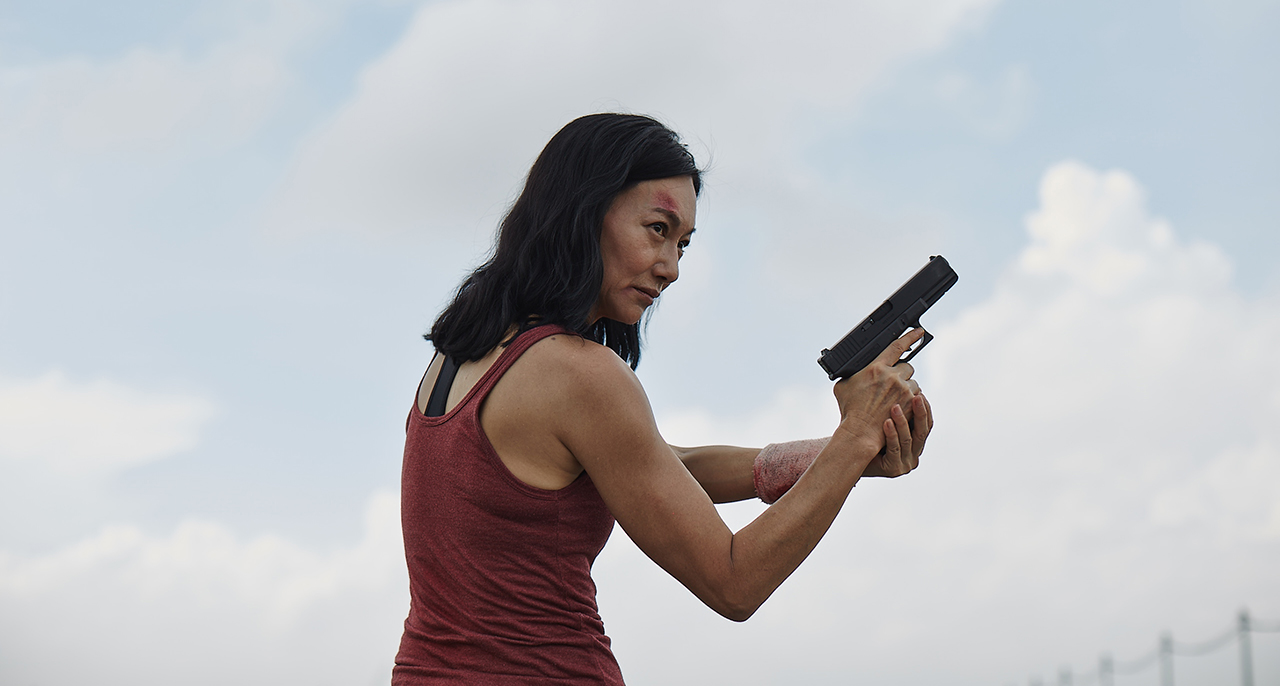 Mrs. K (2016) subverts genre gender conventions of the action film by not only concentrating on a female action hero, but also by having her be the protector of a happy family and a husband whom she taught how to handle himself when push comes to shove.

Kara Hui is the star of Mrs. K and part of the reason for this subversion. She was one of the few female action stars in Hong Kong cinema of the 70s and 80s. She gets to shine here once more in all her kicking, grappling, and punching glory. She was the female star of the films of the Shaw Brothers studio. Through the influence of directors such as Chang Cheh at Shaw Brothers, and other directors and industry executives at other studios, and the enormous success of Bruce Lee, male stars came to dominate Hong Kong action cinema from the late 60s onwards.

Before that time, the martial arts genre was very much equal opportunity. In the 20s and 30s it was even dominated by female stars, or at least the surviving films of that era give that impression. Then in the 40s and 50s male stars entered the fray. In the 60s and 70s, movies of the influential director King Hu female stars rule the roost, like in Dragon Gate Inn (1967) or Touch of Zen (1971), but thanks to the aforementioned rise of Shaw Brothers and Bruce Lee, angry leading men become the industry norm. To this day, there are not that many female action stars in either the East or the West. After Kara Hui’s brief time in the spotlight (she didn’t even have that many leading roles, often supporting the likes of Gordon Liu) in films such as My Young Auntie (1981), there was Michelle Yeoh. But Hui and Yeoh have become the exception to the rule of the Jackie Chans, Chow Yun-Fats and Donnie Yens. Hui had even all but disappeared from action films in the past decades.

Which is why it’s so satisfying to see her still kicking ass in Mrs. K, in a time when older actresses so rarely get starring roles, let alone starring roles in action films. Not only was the movie written specifically with the agenda of making at least one last action film starring Kara Hui, but the part that’s written for her seems a deliberate subversion of the kind of roles most actresses her age (Hui is 57) have to put up with to even get work.

Subverting Gender Roles in Both Domestic and Action Scenes

At the start of the film, Kara Hui plays a seemingly normal housewife, doting on a cute daughter and married to a doctor to which she owes her kushy life style and beautiful big house. She almost seems a trophy wife, dedicated to keeping house. But soon we learn that this is mostly a facade: The family’s riches don’t come from his income, but are based on her loot from a casino heist in Macau, her last score as a career criminal before she fled to Malaysia, where she met her husband and settled down. As is to be expected, however, there’s no such thing as one last heist bringing everlasting peace and tranquility, and her past has come to haunt her. A cop that she shot during a police chase following the heist, is hunting the members of the heist team down one by one. He’s played by Simon Yam, Yamming it up as only Yam can. She is the last on his list, and he has finally found her. And he turns out to be a psycho, with her bullet still lodged in his body and not having slept one night since that fateful night. To get back at her, he first kidnaps her daughter, ensuring that her past life and current life become fully intertwined.

Before the villain’s intent is fully revealed, we get scenes of the parents fretting, not sure what to do while their child is taken. She is the angry, aggressive alpha, wanting to take action and kill people right away, while her husband is a calming, caring influence on her, telling her to wait for the sake of their daughter’s safety. This mirrors their dynamic during a family dinner earlier in the film, that ended in a far less tense situation. Both times, Mrs. K fills the stereotypical role of the patriarch, to a certain extent.

When it’s finally time for action, she fully fulfills that role by taking down her opponents (hired goons) one by one or several at a time. Although there are a few times when the editing is kind to her, this is where Kara Hui truly shines as an all-round performer and entertainer, with acrobatic moves, stunts, jumps and hard hitting kicks and knocks. It’s hard to believe a 57-year old can dish it out and simultaneously take it like she does. But her moves are real, and they’re spectacular. In comparison, her husband is helpless and hapless in combat. But as a doctor, he once saved a local mobster’s child, which gives the couple the opportunity to now call in a favor and get some much needed arsenal. When asked if he knows how to use a gun, he answers: “You won’t believe me, but my wife taught me.” Thus completing the subversion of their gender roles, with him as caretaker/nurturer and her as physical protector. Him the one that takes care of the family unit from the inside while she protects it from the outside world.

A complete gender role reversal of what you’d find in an old western, a conscious decision given how many times that genre is referenced in Mrs. K. Director Ho Yuhang is very aware of both Hollywood and Italian Westerns, and of Hong Kong cinema, judging by said references and for instance the casting of Hong Kong directors Fruit Chan and Kirk Wong as the ghosts of Mrs. K’s former partners in crime in a dream sequence. Being so steeped in genre lore, lends the film’s gender role reversal strength and makes one wish this wasn’t Kara Hui’s supposedly last martial arts movie. The world needs more.

Mrs. K screens tomorrow at the San Francisco International Film Festival and will also screen at the Udine Far East Film Festival which takes place from the 21st to the 29th of April. Next Monday, Frameland will feature an interview with Lorna Tee, one of the producers of Mrs. K.
This Essay article was published in April 2017