Knightriders: A Labour of Love and Autobiography 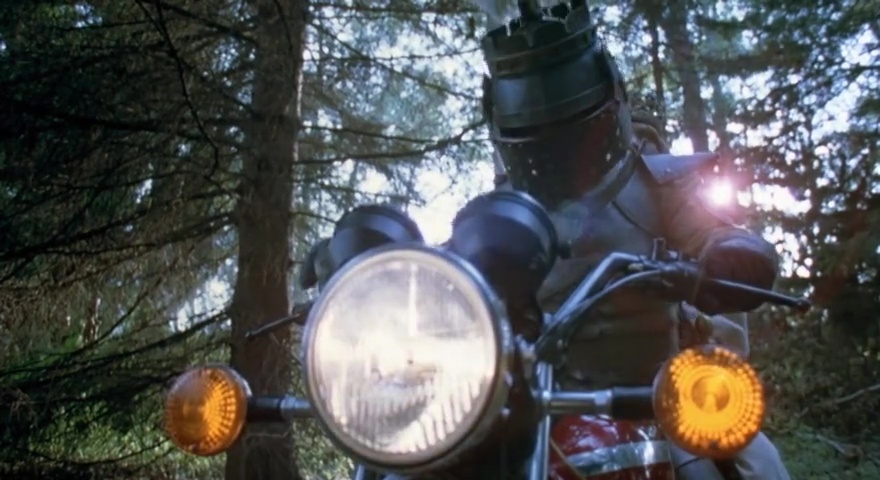 “Gotta snap easy..don’t want anybody getting killed out there.” From his unhurried gait to the leisurely pace of his movies, George Romero never hurried anywhere. Which is why Knightriders is one of the last films of the 70s but wasn’t released until 1981. It’s got so many 70s ideas, from the scrapes with cops (Everything from Convoy (1978) to Macon County Line (1974); the ending is right out of Electra Glide in Blue (1973)) to the oddball sports focus (The Honkers (1972), Slap Shot (1977), Junior Bonner (1972), The Unholy Rollers (1972), Gus (1976)), that nothing but its total commitment to the cultist-only center (guys in armor riding motorcycles) really places it in the 80s. The cornball mysticism that rears its head in Ed Harris’ dreams is pure 70s. The heroes of 80s movies didn’t need cosmic forces, they had money. They relied on psychic powers mostly as a way to resurrect Jason Voorhees…and sometimes kill him. It was a weird time. Which is why Knightriders sort of fits and sort of doesn’t. The mysticism was a sweet counter to the fatalism that so defined the downtrodden character studies of the Nixon years. Made it seem like the no-hope losers wouldn’t be killed for nothing. But when it’s just you after your heroes die, all that destiny talk doesn’t mean a goddamn thing.

Knightriders accidentally reminds one of Roddy MacDowall’s Tam Lin (1970), which also placed mythic forces in a modern framework. The magic is real in the earlier film, so the conceit is less outlandish, but they have a similarly wonk energy about communities with members of varying commitment. The music is similarly pitched in both films, with the court music piping in during the battles in Knightriders, reminding one of the British folk resurgence, of which Tam-Lin composers, The Pentangle, were part. The effect is of a collective propping up the action. Community on camera and off, a mythic contingent of collaborators. And that’s really the meat of Knightriders, which is Romero’s film about filmmaking, probably his most personal work. Yes, it’s technically about the men and women who work at a Rennaisance festival and have traded their horses for motorcycles, and their slightly mad king who bucks the changing times that demand he make some concession to what an 80s audience might want from a traveling carnival. But it’s really about Romero’s homegrown film crew and his slightly outdated independent model. If he hadn’t already signed a deal to work with Stephen King to make Creepshow (1982), it’s easy to imagine him never getting big money again after a film this deliberately niche. But that was Romero. Unlike Ed Harris’ King Billy, he knew when to compromise. But he knew when to stick to his guns and make something only George Romero could have made (there’s a thread about selling out to a TV station, which is seen as a betrayal not only to the community but to the king/director’s ideal). Billy’s motorcycle riding lawyer admonishes him to keep costs in mind as he takes on more and more members of the gang, and you can hear Romero fighting with himself.

The film couldn’t be any more plainly a labor of love and autobiography. After all his chopper-strapped jousters are made up of just about all of the early Romero players. Ken Foree and Scott Reiniger, familiar as the disillusioned cops from Dawn of the Dead (1978), whose unspoken romance never ceases to move me, are blacksmith and black knight respectively. Tom Savini, Romero’s makeup guy and head hooligan from Dawn is the head hotrodder who doesn’t truck with Ed Harris’ notion of community. Jim Baffico, familiar as the cop who goes ‘apeshit’ in Dawn, shows up as a disgruntled customer who bugs Anthony Dileo, or as you might know him, poor, armless Miguel from Day of the Dead (1985). John Harrison, later a prolific screenwriter, is here, in one of his few acting roles other than when he got a screwdriver to the ear in Dawn of the Dead. Stuntman extraordinaire Taso Stavrakis is back once more as Tom Savini’s man friday after Dawn. John Amplas, Martin himself, is back in a meatier role after playing, in Romero’s own words, Che Guevara during the apartment siege in Dawn of the Dead. The delightfully named Warner Shook, of Dawn and later of Creepshow, appears as Pippin. Romero’s soon-to-be-wife Christine Forrest and Patricia Tallman, later of Tom Savini’s remake of Night of the Living Dead (1968), are two of the female leads. Joe Pilato, so memorable in Day, is here for a cameo, as is the first modern zombie Bill Hinzman, he who came to get Barbara. Producer Richard Rubinstein and Stephen King both have small cameos, and the landscape is Romero’s Pennsylvania, which is more plain, doomed, and romantic than anyone else’s. It’s the one I grew up with, even if I never got close to Pittsburgh. His images of Pennsylvania, the grass always a little less green, the dying foliage crowding his camera, the farmer’s markets and the threat of the carnivalesque breaking out, that’s the Pennsylvania I know and called home. I went to all the Renn Fairs and native American pow-wows and Amish farmer’s markets and haggling-welcome Q marts. This never struck me as all that weird, which is maybe why Romero’s always struck me as ahead of his time, turning his hometown terrain into the stuff of legend, rather than recreating it in a studio like Spielberg.

When the crew gathers around a campfire for some food out of partitioned tin foil platters and a happy folk song, this, one gets the feeling is Romero at his happiest. The sun going down, boys and girls playing with swords and bows and arrows, this was him turning his filmmaking experience inside out. It may look fake to the audience, but Billy lives by a code and encourages his riders to do the same. Not everyone understands it, but his earnestness fosters a productive dialogue about identity. There’s a lot of talk about sex and sexual identity, a lot of it very funny and still relevant. There’s police corruption and domestic abuse on the fringes, making it clear why these folks choose their nomadic and slightly deranged lifestyle with each other. Romero loved a misfit. There’s some old fashioned hillbilly humour here, redolent of either Smokey and the Bandit (1977) or Looney Tunes, depending on how high the banjo is cranked on the soundtrack, but Romero’s never talking down to anyone.

Like Wolf Creek 2 (2013) this was a transparent attempt to make as many movies as possible in one go. The motorcycle chase scenes and all the jousts are genuinely thrilling. He could have made any one of the films this threatens to become. The costumes and helmets and bikes present so many layers of artifice, you’d think they’d collide like his jousting bikers, but Romero’s wide-open mise-en-scene keeps it all straight. It’s hardcore realism about wanting to believe in fantasy. There’s a little Altman in the sprawling community and its oddball rituals, but Romero loved and relied on montage. He had a blue collar approach to the editing bay, like he was building a carburetor. The machinery is so satisfying to watch in action. And Romero so clearly loves all these nutcase dreamers because they’re his film crew, who took chance after chance making art with him. The troupe has a doctor, a laywer, mechanics, sword makers, cooks, salesmen, a fake priest; their reality is self-contained, which is very Altman. Romero wanted to mythologize so he used close-ups and dignified medium shots, instead of hanging back and letting the talk drive the action. Rob Zombie obviously took a lot from Romero’s version of horror as a familiar thing shambling up suburban streets to get you, but he takes equally from Knightriders‘ utopian view of outsider communities. There’s nothing more pleasing than when everyone’s where they’re supposed to be, committing to the fantasy. There’s a sense in Rob Zombie movies that in hiring actors like Foree, Meg Foster, Tom Towles, Margot Kidder, Howard Hesseman, Dee Wallace, Sid Haig, Michael Berryman, and Bill Moseley, he was keeping them safe. Giving good roles and a simpatico milieu to actors who had fallen out of favour thanks to typecasting and Hollywood’s eternal shallowness. That’s a sensation that starts with Knightriders. Romero loved and respected his crew and his actors, and this movie is explicitly about that love, which ultimately matters more than the symbolic quest Billy is on.

“You got two separate fights…the one for truth and justice and the American way of life and all that. That’s gotta take a backseat to the one for stayin’ alive, ya gotta stay alive! You can have the most beautiful ideals in the whole world, but if you die you’re ideals are gonna die with ya. The important thing is we gotta stay together.”

That little monologue would fit just as neatly in Two-Lane Blacktop (1971), but works pretty well in a Pittsburgh backwater spouted by a guy dressed like a knight errant. That’s the romantic version of filmmaking I’ve always bought into and tried to participate in. Romero was kind of a myth, a legend. He did it his way and the films never got worse. One expected him to burn out the way King Billy does here, to close his eyes for too long while driving, but he stayed true and made the films he knew no one else would. Knightriders was like the Heaven’s Gate (1980) or One From The Heart (1981) of low-budget independent 70s filmmaking. The majors started swallowing up small talents when they appeared. The circus wasn’t in town anymore. The 70s were over.