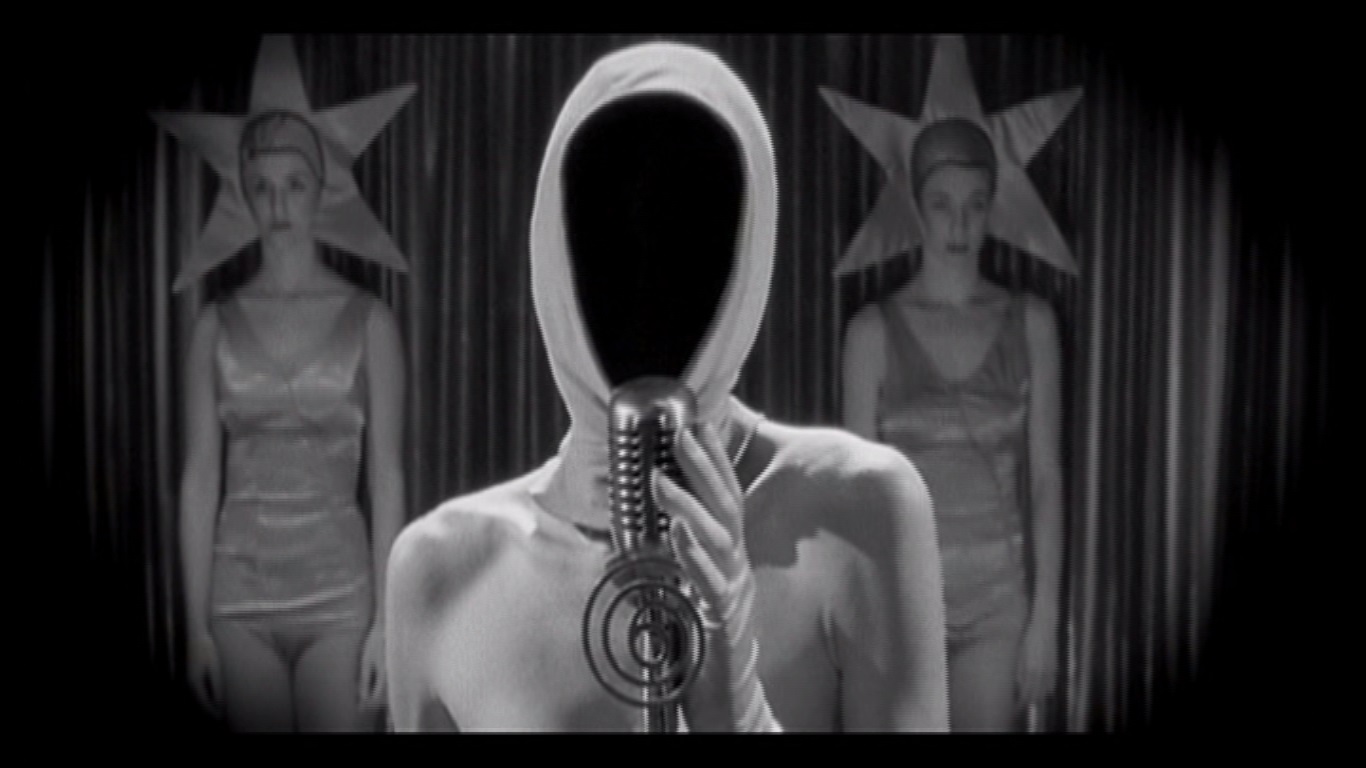 La Antena (2007) is a surrealistic silent black-and-white film, filled with references to early silent cinema. Only two characters can talk in La Antena, but the resulting silence says more than a thousand voices. Director Estaban Sapir mixes the fairy tale and detective genres to criticise dictatorship.

Stylistically, La Antena is a mix of German Expressionism and Film Noir. The German Expressionism is visible in the surrealistic landscapes, the shadows and the static cinematography. Meanwhile the dark settings, the presence of a (lonely) detective and a femme fatale, the hard society the characters live in and the use of extreme close-ups and long shots echo the Film Noir style. Soviet Montage cinema is also referenced, for instance through quickly edited shots of fast typing hands at the start of the film.

Voice as a treasure

The story of La Antena is told as a fairy tale. It starts with a book that opens by itself. Inter titles start telling the story:  “Once upon a time, there was a city without a voice. Somebody went away and took all the voices of the inhabitants with him. Nobody seemed to care about the silence.” Apparently, they have accepted the fact they have no voice.

However, there are two persons who still have their voices: a female singer called ‘The Voice’, whose face is covered and therefore looks like a black hole, and her son, Tomás, who has no eyes. The Voice sings in a TV show. During one of her performances, she sings “you have to find your own place in this bad digital world”, with which see seems to criticise the influence of mass media.

One day, she returns home after her performance. Her son hears her and asks: “Mama, is that you?” “Shht,” his mother whispers, “don’t talk if you’re not sure. They might hear you. That’s dangerous.” It seems that the person who went away and took the voices with them, kept the voices of the inhabitants of the city because they were not allowed to speak any more. Thus the son must take care of his voice as if it is a treasure, his mother tells him.

In La Antena, you can see people speak, but you can’t hear them. What they say is shown by titles on the frame, with which characters sometimes interact. The characters also remind each other of the fact that they are not allowed to speak, by laying a hand or a finger on their own or someone else’s mouth.

In La Antena, only one kind of media is allowed to be consumed: TV food. TV food is present everywhere. The city is wrapped up with TV food posters, people can only eat TV food cookies and TV food seems the only thing people can watch on television. The boss of TV food, Mr. TV, is the one that decides what the inhabitants of the city are allowed to consume. Therefore TV food is rather propaganda than just a popular kind of media.

The father and grandfather of little girl Ana work as journalists for TV food. They get the blame for the disappearance of the balloon man, the mascot of TV food. That’s the reason why they get fired, which the other inhabitants get to know thanks to the signs they have to wear around their neck, reminiscent of the Star of David Jewish people had to wear in Europe under Nazi rule.

The logo of TV food looks like a hypnotizing circle, that is present everywhere as well. Mr. TV clearly wants to hypnotise his folk. The logo is on the envelope Ana gets, on billboards on the street, on television and on the car of TV food’s boss. Especially the place of the sign on the car seems a reference to the swastika, the Nazi symbol. Later on, a real swastika is presented in the film as well as a Star of David, to which the son of The Voice is tied. Mr. TV, more or less a dictator in La Antena, looks like he has Hitler’s haircut painted on his head.

The Voice is the only voice people are allowed to hear. Mr. TV uses her voice to indoctrinate the inhabitants of the city. He manipulates her by promising her eyes for her son. When he realises that her son has a voice to, he orders the boy killed. His voice can neutralise the voice of his mother and thus the power of Mr. TV.

We still have our words

In the meanwhile, Ana’s father comes up with the idea to save the boy. He knows where the old antenna is. He wants to fix it so that he can broadcast the voice of The Voice’s son. He reminds himself of his father’s words: “They took away our voices, but we still have our words”. Together with Ana, the boy and his ex-wife, he climbs the mountain on which the antenna stand.

However, after a fight with Mr. TV’s men, the boy starts to talk. The voice of The Voice is neutralised, which means game over for the mighty Mr. TV and his TV food industry. During the broadcast of his voice, people fall down on the streets. Words fly out of their heads; they still have weapons to fight against the dictatorship of Mr. TV. They fly through the air, along the moon (that looks like the one in Méliès’ Le Voyage Dans La Lune) and end at the antenna.

And then suddenly, the people wake up and start to scream in a kind of harmonious manner. “The city has its voice back and everything was fixed again,” the last titles say. But does this fairy tale end with a happily ever after? That question remains unanswered, as if Sapir wants to say that things hardly changed after elimination of ‘Mr. TV’. After all, mass media still exist and so does dictatorship. And what should we do: scream and shout or just be silent? The book closes.