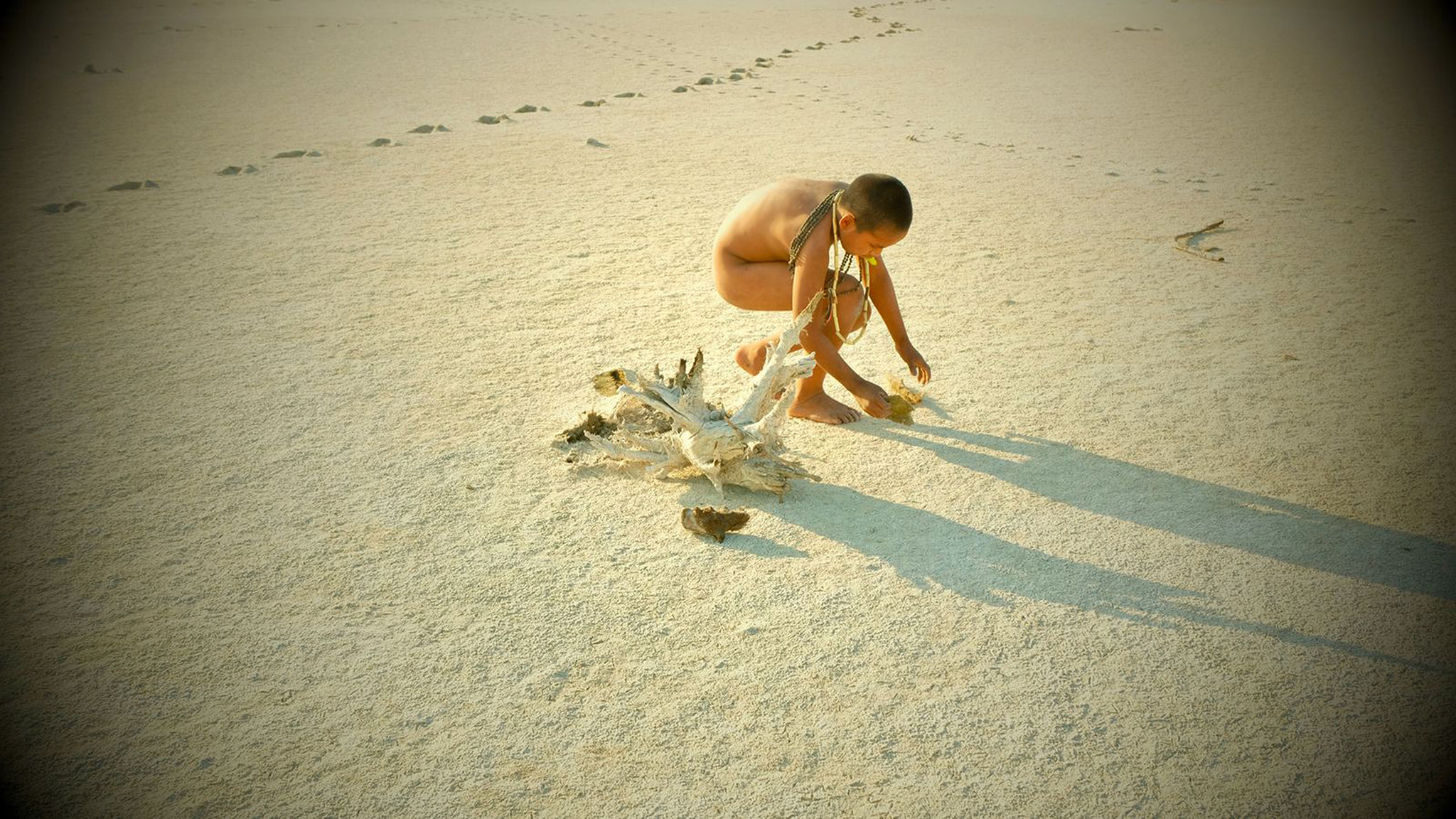 Few films at the International Film Festival Rotterdam 2022 touched the subject of the COVID-19 pandemic heads-on, a public health crisis that spells the end of business as usual. However, many films strikingly enough came across as elegies mourning ways of life lost to time.

In a blend of documentary and fiction Eami tells the story of the Ayoreo-Totobiegosode people in Argentina. The titular little girls last haunt through the forest before joining industrial society plays like a dirge for this endangered lifestyle.

Thanks to mesmerizing sound design the horror of razing chainsaws and violent colonizers looms in the distance like fate, while a forest fire’s flames reflect on the ground. These tableaux do feel belaboured to the point of artificiality. Like El abrazo de la serpiente (2015), Eami strives to preserve a way of life soon gone in film but misses that masterpiece’s philosophical depth. Nonetheless, it tells the Ayoreo’s urgent message with a fierce conviction, when the weathered people share their feelings in enduring takes as does Emai’s piercing stare.

The Cathedral provides a time capsule back to the age that laid the groundwork for current American distress. A large family lives through the 1980s until the 2000s seen from the perspective of one boy. Archival footage marks moments of US history while his father’s financial situation deteriorates as do the familial ties.

In tightly constructed frames the neatly dressed characters move about as natural as in a documentary film. It elevates their plight into an archetypical history that subtly reflects that of their society. When the business-like voice-over falls silent the cast’s austere attitude takes over with meticulously timed bursts of anger. Director Ricky D’Ambrose registers the family’s slow collapse with a stark determination reminiscent of Jon Jost’s cynical gaze in a film like Over Here (2008). The sombre tale of The Cathedral weeps silently but intensely.

France revolves around Lea Seydoux’ powerful gaze to a fault. As the famous TV personality in France, she walks around in war zones rigorously directing her crew and subjects for maximum emotional effect. When she gets involved in a car accident she starts to doubt her life.

With technocrat Emmanuel Macron cleverly edited into a press conference, the film ostentatively strives to make a grand statement about France in general, a fiction that lost its lustre just like the presenter realized the phoniness of her own life. Director Bruno Dumont indulges in close-ups of sad faces accompanied by pulsating synthpop, just like he did in Jeanne (2019). Seydoux delivers those in spades with her vigorous appearance, which elevates the existential anguish of France into a spiritual realm.

Director Zhengfan Yang filmed his surroundings from his Chicago apartment during the first year of the COVID-19 pandemic for Footnote. Chatter from the police radio accompanies the panoramas with hardly a soul present in them. The law enforcement vignettes fade in and out as the days pass by.

Although conceptually the film feels one-note, Yang creates a meditative flow where the quiet images and radio chatter attune to each other attentively. The fragments subtly weave together a faint story of a team working through a fraught pandemic and US election year. Bereft of an institutional critique of the police Footnote provides a focused compassionate look at people during a time of crisis. “We’re in this together” is the lie peddled by eugenic let it rip governments like that of the Netherlands, but Yangs humble film does provide a hope that there may be some truth to that cliché after all.