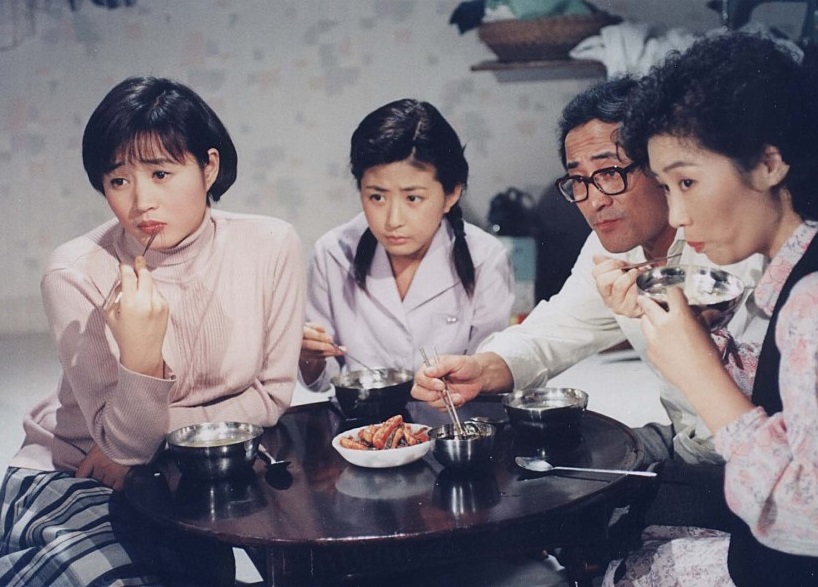 First Love (1993)
Editor’s Note: You can read our interview with Lee Myung-se at LKFF here.

You may not know or remember it, but the great director Lee Myung-se made films before his international breakthrough Nowhere to Hide (1999). Three of them had a rare screening at the current London Korean Film Festival, which also gave Lee’s new short film its UK premiere.

The first was My Love, My Bride (1990), about the troubles faced by two young newlyweds; the second, First Love (1993), about a young woman’s naive infatuation with her obnoxious drama teacher; the third, Their Last Love Affair (1996), about the liaison between a young journalist and a married poet. If the topics seem familiar, what the writer/director does with them is anything but, so let’s take a closer look.

The effect of My Love as comedy relies as much on the humour of embarrassment and sight gags as it does on the film’s form, style, and shape. It’s tightly focused, from the chapter division down to the framing and blocking and the use of primary colours. And it employs a barrage of formal devices, which include scenes partly or entirely dreamt up by characters, actors addressing the camera, cartoon-like animations and thought bubbles, split-screens-as-postcards, and much else. The result is breathtaking: a sensory and cerebral stimulation that reinforces the funny/sad comedy, seemingly effortlessly. One way of assessing its success would be to compare it to the anodyne 2014 remake/update, which copies the most broadly droll scenes, erases almost all traces of the formal wit, and replaces the sombre ending with a happy one.

First Love is almost as funny and stylish, but takes what it does with its main character’s imagination to a whole other level. In the girl’s daydreams, the teacher she’s hopelessly in love with remains as aloof as in reality, so that these scenes function not merely as wishful thinking but as a cinematic ‘bridge’ between two irreconcilable characters. Lee also treats the girl’s visualized musings as just one of the film’s several planes of artifice: for one, the man is directing the girl in a performance of Wilder’s Our Town (a play-within-a-play itself); for another, the ‘real’ scenes are ‘unreal’ in that they play out on intentionally obvious studio sets, as heavily colour-designed to match the girl’s mindset as the rare outdoors locations are. This sounds like weighty stuff, but Lee maintains a lightness of touch throughout.

In Their Last Love Affair, two people go through all stages of an extramarital affair (from blind lust to petty bickering, from tearful remorse to violent anger) in other kinds of cine-realities. Most of the affair plays out in an absurd location: a beachside shack that looks like a mini-home on the inside, but is frequently stressed to be several removes from reality, spatial or otherwise. When the pair goes on a final holiday in the mountains in an attempt to avoid facing the hard truth, we suddenly see them in haunting black-and-white, in a style that approaches wordless abstraction during the climactic sex scene. And the end of this romance is wrapped up in a movie in-joke that is as fitting as it is touching.

Lee’s sophisticated play with film language and his preoccupation with the workings of time and the imagination in these films have earned him comparisons to early Godard and mid-career Resnais respectively. But neither of these Frenchies ever provoked as much laughter, or made anything quite as moving; all three films are riotously funny and achingly poignant. The key to this is probably that no matter how hilarious the jokes are and how far the visual/conceptual inventions go, the characters keep behaving in fundamentally human ways. Exaggerated or not, all of the silly/loving/cowardly/delusional things these people do is recognizable to anyone who’s been in love, had a fling and/or maintained a relationship. And so it seems hardly a stretch to say these three films are some of the most brilliantly original romantic comedies ever made. The above attempt to explain some of their workings is far from exhaustive; they need to be seen to be believed, and reward repeated viewing.

The new short film Can’t Live Without You is an ultra-stylized mini-mystery about a woman, a man, and a suitcase, half of which is comprised of an elaborate spectacle of two bodies in motion. In that way, it has a bit more in common with Lee’s ‘action’ films Nowhere to Hide and Duelist (2005), but clear lines can also be drawn to the other films. It confirms, among other things, the endurance of Lee’s wholesale rejection of ‘realism’ as commonly deployed in cinema; of his belief that poetic ideas from the Western literary canon can confer meaning to what we see (the films opens with a Proust quote and ends with the same Rilke text that opened First Love); and of his conviction that slapstick can transcend mere comedy. But most of all, it strongly reaffirms his ability to do inventive things to action scenes, such as merging seemingly incompatible notions in it (movement/stasis, attraction/revulsion), and establishing the music score as an element inextricable from it. In short: Can’t Live Without You is as exhilarating as anything Lee Myung-se has done before, and raises high expectations for his next work.

This Essay article was published in November 2018