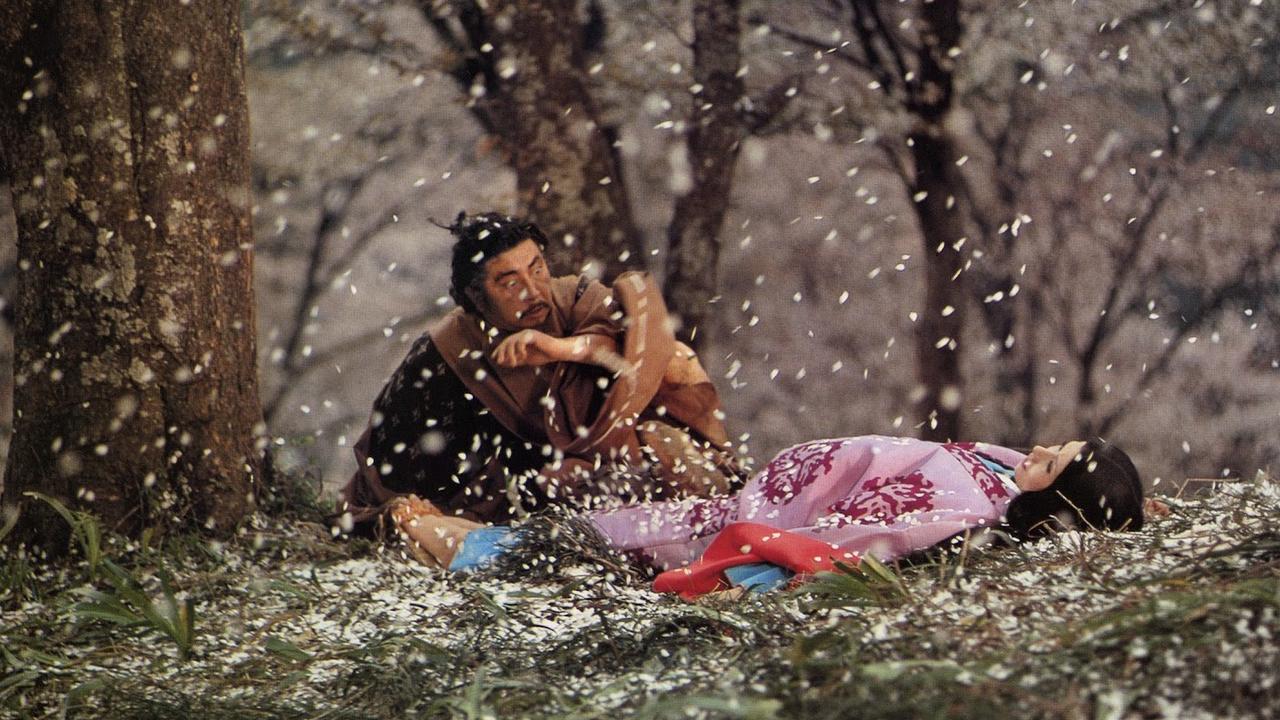 Under the Blossoming Cherry Trees (1975)

While Japanese films, from the generational shifts in Ozu’s Tokyo Story (1953) to just recently in the economic plights of Kore-eda’s Shoplifters (2018), were always deeply interested in examining the changes of the nation and its populace, the Japanese New Wave posed a unique film movement combining this examination with experimentation in form and thematic structure. No director of the era is a clearer example of this than Masahiro Shinoda. Through a specific unofficial trilogy of films made between 1974 and 1977, one which I like to call his “Ghosts of Japan Trilogy” Shinoda showcased the greatest examples of a Japanese cinema coming to terms with the nation’s isolationist and imperialist history and facing a philosophical crossroads, as it grew ever more into a modern globalist power.

The first of this trilogy, Himiko (1974), is a radical and acid-dripped folktale heavily inspired by both the legend of Amaterasu, Sun Goddess in the Shinto religion, and a real-life shamaness-queen known as Himiko. Taking place in a mystical forested area, the film speaks of a woman named Himiko (A brilliant and terrifying Shima Iwashita), whose love for a wandering traveller named Takehiko is tested by her ascension to becoming the official messenger of the Sun God, and Takehiko’s sympathetic attitude towards the other kingdoms and Gods. Like most of Shinoda’s filmography, starting with Assassination (1964), Himiko draws its central conflict from the opposing viewpoints of an ‘old way’ and a ‘new way’. The Sun God People, who claim a supremacist attitude towards all the other kingdoms, come in direct confrontation with Takehiko’s worldliness.

Metaphorically referencing Japan’s identity crisis post-Edo era, Shinoda directs this film in a semi-surrealist style, featuring sequences of hallucinatory and sexual imagery and mixing traditional Japanese art forms like kabuki theatre with Western interpretive dance. A pivotal torture sequence in the film, one in which fingernails are ripped out, is performed as a terrifyingly experimental ballet, akin to Stravinsky’s Right of Spring. The film presents itself as a microcosm of Japan’s entire history from the end of the Tokugawa Shogunate to the end of World War II. The demise of both Takehiko and Himiko is not representative of merely a conflict between isolation and globalization but the tornado of imperialism that forms from those respective currents. The result is always war and death. In the end, Shinoda pulls the rug from under us, a recurring theme which he will continue in the rest of the trilogy as well. A camera pans out of the mystical forest in an aerial shot only to show it is surrounded by a fully advanced and urban Japan of modern day. While Japan as a nation changes through time, its past will always exist within the geographical and physical places; the mountains, valleys, rivers, and forests. Each one of them tells a story of the nation’s history, buried underneath.

Under the Blossoming Cherry Trees

This existence of a historical connection to place is directly referenced in the title of the second (and best) film of the trilogy, Under the Blossoming Cherry Trees (1975). Almost as if to say, “I lead you on in the first movie, now I’ll just spill it from the get-go in the second”, Cherry Trees begins the way Himiko ends, with a contextual reference of modern Japan. Kids play in the park, families have a picnic, and the cherry blossoms rustle above them. Shinoda transports us back to the Edo period where the same blossoms, phantoms of Japanese history, held a sinister secret. His second film’s central unnamed characters (for the purposes of this essay, I’ll address them as ‘the Mountain Man’ and ‘the Maiden’) can be interpreted as manifestations of Japan and it’s corruption through imperialist ambitions respectively. As the Mountain Man, who initially kidnaps the Maiden as a new wife, becomes more and more psychologically broken and subservient to her every whim, we see his rage and killing grow more pronounced. The film’s subversion of gender norms in samurai films is representative of a usurping of old conventions. The Maiden, whenever she wants something (to be carried, to be aroused, to be fed), simply has to emasculate the Mountain Man with words and he, through his own ego, will strive to compensate. He is initially isolated in the mountains, self-reliant and killing for survival, but as his need to please his new maiden thrusts him into modern society (in this case, the city of Edo), he grows more confused, and his killing becomes an act of reckless abandon.

The movie’s allegorical connection with the violence that Japanese imperialism caused in China and Korea is similar to the undertones of many of America’s horror films, which feature and reference the genocide of Native Americans. While these connections may be subconsciously included and interpretive, their literal existence as plot points for horror (cursed house built on an Indian burial ground in Poltergeist) shows that these historical events are very real sources of fear and discomfort. What we glean from the cherry blossoms as a beautiful and decorative landscape of flowers and wonderful smells, Shinoda makes us see a haunted and cursed land filled with madness.

The Ballad of Orin

Going off of two films which use symbolism to hint at a nation’s transition into modern day, Shinoda created a much more direct film in The Ballad of Orin (1977), one which leaves no doubt in his anti-war and anti-imperialist stance. It tells the story of a blind orphan girl named Orin (Shima Iwashita yet again) who is raised as a goze and, after she’s kicked out because of her promiscuousness, meets and pines for a draft-dodger, who she refers to as “Brother” to hide his identity. The post-Edo era, right before World War II was one of the most confusing transitional periods of the country’s history. Orin’s journey, from her roots in a coastal village, her eventual landing in a major town selling geta, and finally, being interviewed by policemen dressed in suits and ties, visually depicts the transformation towards modernization (in clothing, buildings, language) around her, representative of a change in place and time.

Shinoda doesn’t leave anyone stuck piecing together metaphors and symbols. He reveals his message fully in the form of a shigin, recited by two kenshibu dancers on the streetside of a town Orin travels to: “Oh it’s confusing, it’s confusing. This present world is confusing. They say Westernization is underway, but you can’t judge only by what you see! Gas and electricity are amazing, steam engines are wonderful, but they are just flash and show, like gilding or puffed tempura. People keep complaining about the bad economy, unaware of being caught in an endless cycle of cash shortages. Oh, it’s confusing, it’s confusing. Love and duty are also confusing. Are people blinded by their selfish desires? Oh, all the people are confusing!”

Orin, much like previous characters in the trilogy, serves as a mythological figure, a cypher through who Shinoda connects Japan’s past and present. Shinoda again reveals in the end that history is ever-present and ever-watching. Land surveyors excavate a cave which we see Orin and Brother pass by multiple times. They look up towards the hill and notice a shawl. Next to it, the camera pans to a skull and several other pieces of Orin’s clothing. Remnants of the past in haunt the modern day, slowly becoming part of the landscape itself. The geographical structures of Japan remain forever, and they serve as a preservation of the country’s history, its people, and its fables. Shinoda’s Ghosts of Japan trilogy presents one of the best examples of a filmmaker revisiting and confronting the ideas, events, and places which haunt his country.

This Essay article was published in December 2018