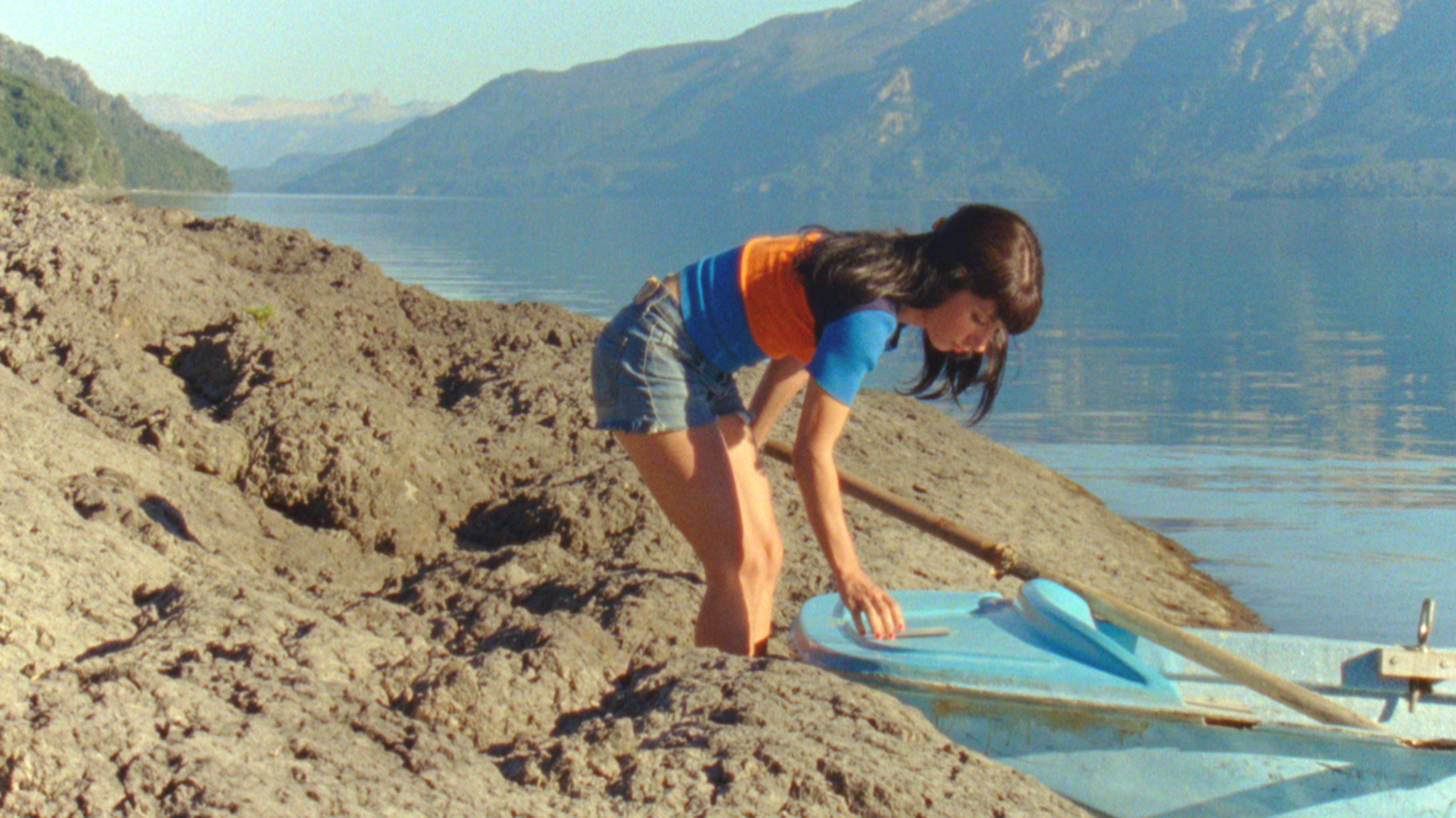 The Idea of a Lake (2016) directed by Milagros Mumenthaler

Milagros Mumenthaler makes major movies, even though The Idea of a Lake (2016) is only her second film after Back to Stay (2011). Sadly, her movies aren’t always that easily found outside the festival circuit. At Frameland we feel Miss Mumenthaler deserves more attention, and thus we talked to her about her second film when it played at the 2017 edition of the International Film Festival Rotterdam.

Come and get these memories

In one of the first scènes of The Idea of a Lake, we see one of many memories of main character Inès, this one of when she was just twelve years old and staying with her family in the South of Argentina. She breathes on the camera, and the image fogs up for a moment before refocusing on Inés. Milagros Mumenthaler did that for a very specific reason:

This film is an exploration of how to represent intimacy cinema. So for me it was interesting to see how the character of Inés can manipulate the image we get, because it get’s foggy. It’s as if she can manipulate the negative. By doing so she tells us how she feels. She invites the spectator, she invites you in her intimate world but she picks a restriction. This is as far as she’ll go, and as far as we can follow her into her memories. I think it was good for the character to present this when she was little.

Mumenthaler didn’t come up with the idea for her film out of thin air. The Idea of a Lake is partly based on a book, a collection of images and poems of and by children of people that disappeared during the 20th century military regimes of Argentina. But the film isn’t a straightforward adaptation of the book, in so far as that would even be possible, but a fictionalized account of the making of it. People read the poems featured in the book, and Inés is the author/compiler of the actual book (even though in reality it was a man). As Mumenthaler says,

The film starts with a text that is the main character’s writing, taken from the actual book she’s compiling in the film, full of archived pictures. The movie has some elements that are documentary and some elements that are fiction. In a way, Inès search for something is very related to the one in the real book. For example, when Ines, the main character, goes to the island to search for the place where she took a picture with her father, that is the same picture that appears in the book that the movie is based on. But taken with actors. The photographs that you see in the film are exact reproductions of photographs in the book. The photo of the mother and the brother on the table, and the photo of the father with her when she was little (the one on the wall), are reproductions of photo’s of the author. For me the main challenge in approaching this project was giving my own interpretation of the book. That’s why in the story the starting point is the fictional female author, and that’s why I mix fiction with documentary.

Memories of my melancholy people

What Mumenthaler wasn’t interested in, however, was the political element of the book. To her, that’s not the main point or the most important. According to her, we all know what happened. She herself is the daughter of a political refugee, who had to go out of the country because of political issues. Most important to Mumenthaler was the the relationship between mother and daughter. The thing that stays with people is what happened to them, she says, not the political side of that:

Inés’ relationship with her mother and grandmother in her memories, her own pregnancy, her crisis with her partner, in order to deal with all these elements she looks for other stories. Those are the documentary part, the sons and daughters that were seperated from their parents due to the political. The documentary research was done to make a fiction. One part of the comes from the book about those people, and another part is the construction of a fiction that is completely differerent. A construction of the story of the author of the book. For me it was interesting to mix these element. It’s my meeting with the book, my way of putting a lot of elements of myself in the story of the film.

One might expect these elements to be autobiographical, but that is not the case, Mumenthaler explained. For instance, in both movies the main characters deal with the death of parents. A grandmother who took care of her three parentless granddaughters in Back to Stay, and the for decades missing father of Inés in The Idea of a Lake. When asked about this, Mumenthaler laughs heartily while saying she doesn’t know why this is. Both her parents are still alive. The next movie won’t be about the death of a parent, she promises.

Rather than any autobiographical element, Mumenthaler feels the personal elements she puts in her films is how she arranges them. The way the sequences in both films are organised. Even though the structure of both films is very different, on a first level both deal with “the daily things of life, casual happenings” while the second level is more concerned with intimate, familiar links that aren’t spoken out loud necessarily but bubble under the surface of the films constantly. In The Idea of a Lake Mumenthaler used the memories we see, and the different times inside those memories, as opportunities to play with reality and naturality.

Memories are made of this

Mumenthaler used a number of different film formats for different parts of the film. She explains what formats she used and why she used them as follows:

We filmed and recorded in Super16mm, HD and miniDV. Originally, we thought about doing each period in time that the movie covers by using the techniques they used to use in those times. For example, when we were working on a scene that takes place in 1989, we though we’d use a style of colour then in use, and then filming the 1950s parts using Technicolor. But then I realised that even if I wanted to do a hommage or praise previous film techniques, that in the parts taking place in the present I’d lose that. It would deviate from what we really wanted to do and it really wasn’t that important. So finally, I decided to use Super16 for the past, for the memories. Because when you are doing the past, you’re really reinterpreting the past and you want to do that with a certain kind of style. We also shot scenes with anynomous people walking in nature in 35mm, but decided no to use those in the end. Then there was one scene in Mini/DV: that was a home movie, when she’s shooting the brother playing with the uncle, the mother and the creepy guy.

There are a few scenes in The Idea of a Lake that are silent shots of people in nature, with just the sound of the wind. These scenes have a very tangible quality, unlike any other scenes in the film, and feel like one could just reach out and touch the people and the nature surrounding them on the screen. These scenes were shot on Super16, Mumenthaler tells us, but on more grainy film, and in post production the color was changed to make it look more like 16mm. To Mumenthaler, those scenes are very explicitly about the memory of places and people. Like the sound of the trees, or when the mother is lying amongst the trees, Inés is feeling those trees through her memory. She wanted to transmit that through sound and feelings, that sense of being back in that place and time, in a natural way rather than having actors talk about it.

That’s what memory is all about to her. Similarly in a scene where Inés’ grandmother sees the trees moving and hears the wind, in the memory of Inés, because “memories are not just about images but also about what you heard, and the sensation. And this sequence with all this wind, I think it’s Ines that saw the same and heard the same and thus remembers her grandmother like this.”

Nature is very important to Milagros Mumenthaler and her work. Because nature is around us all the time, she think it’s difficult to make a movie without that aspect. What is surrounding us, our environment, weighs very heavily on us. When making a movie Mumenthaler feels it’s very important to take this in consideration. She laments that that “sometimes there are movies that are focussed on very specific details and they forget about the surroundings, they don’t pay much attention to them” This doesn’t seem right to her.

This is why all these tangible memories were shot and take place in Southern Argentina, where the scenery and nature is so vast and so overwhelming, it’s impossible to take for granted. According to Mumenthaler, if you give it your attention, it’s always gonna give you something back. “When you are on the road in this area of Argentina, it’s so big and so vast that there’s a storm here and another thing there and it’s so much that you can take in that it gives an energy you can take back and use. In the movie, Inés takes that energy and uses it for her art.” In this way, the South of Argentina informs the film by its very nature. Mumenthaler says she could’ve never made it in Switzerland, where she lived for 19 years, because as she puts it, “the sky doesn’t change, doesn’t move. Everyday the same for days and days.” But the skies in Argentina are very different, even in Buenos Aires, she says. Lots of change, clouds and movement. This is reflected in the films she writes, and the characters that inhabit them.

This Interviews article was published in May 2017